Accessibility links
Guerrilla Grafters Bring Forbidden Fruit Back To City Trees : The Salt In many metropolitan areas, urban foresters ensure flowering fruit trees don't bear fruit to keep it from being trampled into slippery sidewalk jelly. But a group of fruit fans in the San Francisco Bay Area is surreptitiously grafting fruit-bearing tree limbs onto those fruitless trees. 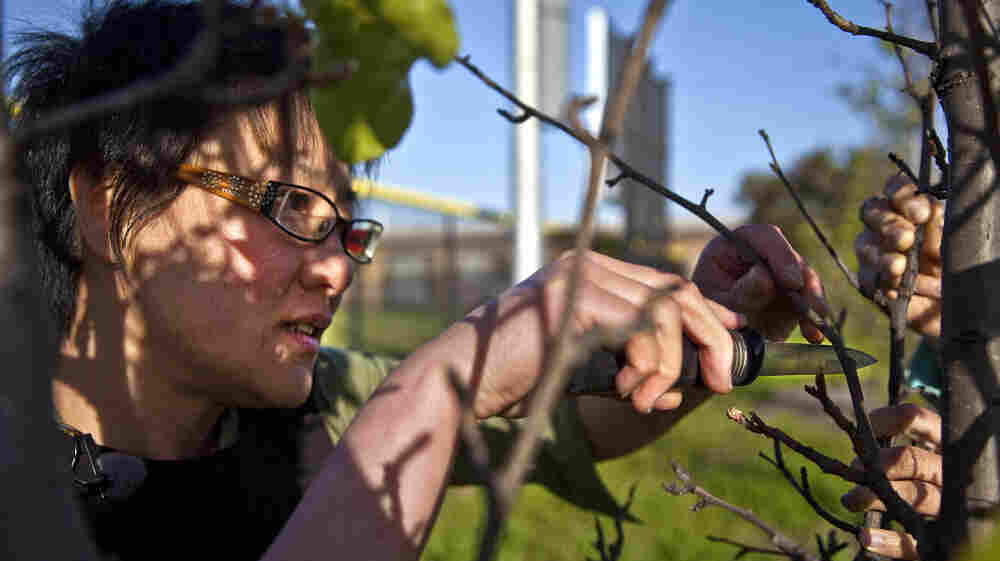 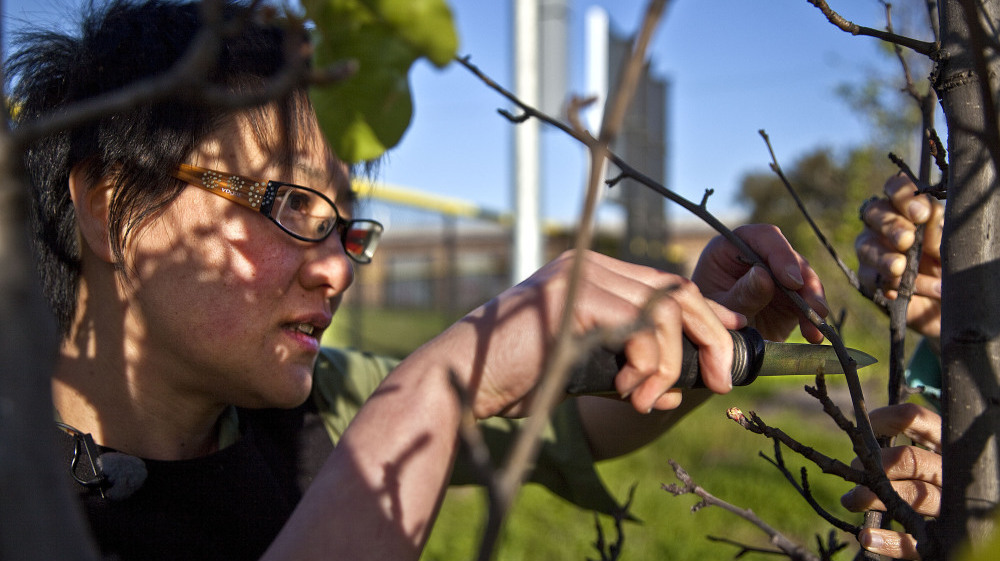 Guerrilla grafter Tara Hui grafts a fruiting pear branch onto an ornamental fruit tree in the San Francisco Bay Area. She doesn't want the location known because the grafting is illegal.

But a group of fruit fans in the San Francisco Bay Area is secretly grafting fruit-bearing tree limbs onto those fruitless trees.

I visited the "crime scene" one recent day, but I can't tell you where it is because I was with the "criminals."

"If we say where it is, they could come after me," says Tara Hui, a fruit tree grafter. She's talking about city officials, who manage the trees and say it's illegal to have fruit trees on sidewalks.

So let's just say we're in some Bay Area city in a working-class neighborhood, at a line of pear trees that bear no pears.

Hui and two assistants pull out a knife, reach into a plastic bag filled with twigs no bigger than your pinkie, and cut from a fruit bearing pear tree. She says it's an Asian pear, and that she's grafting it onto a flowering pear tree.

They whittle a wedge into one end of their twig, then cut a groove into a similar-sized twig on the city tree. They join the two, like tongue and groove carpenters. And when their grafted twig eventually grows into a branch.

"There will be a much better looking tree that actually will provide fruit for people that come by," Hui says.

Hui's motives to break the law are straightforward.

"We don't have a supermarket and we have very few produce stores [here]," she says. "What better to alleviate scarcity of healthy produce in an impoverished area than to grow them yourself and to have it available for free."

Carla Short, an urban forester for the San Francisco Department of Public Works who's in charge of 103,000 public trees, has a different view of fruit trees.

"It gets very dangerous very quickly," Short says. "I mean the minute that fruit gets crushed on the sidewalk, it is slippery. We certainly don't want people to get injured."

She says fruit isn't forbidden everywhere, and the local government does encourage them in community gardens.

But that does put the city forester in an awkward position — advocating for publicly available fruit trees, but policing guerrilla grafters. Short says her team is looking for the guerrilla grafters but hasn't found them yet.

And what will they do if they find them? First, try to reason with the grafters, she says.

Meanwhile, Hui imagines these same streets in the coming years.

"Just taking an evening stroll, and then you see a fruit and you reach over and now you're nourished," says Hui.

So far, officials have yet to discover which of the city's decorative trees will become delicious trees because the grafts aren't yet old enough to bear fruit.