Accessibility links
Ch-Ch-Ch-Chia: Not Just A Potted Pet. Now It's Health Food : The Salt The Aztec people believed chia seeds gave them the power to run faster and longer. Today, they're the latest healthy diet trend. But don't eat those old holiday gifts growing out of clay pots, the company recommends.

Ch-Ch-Ch-Chia: Not Just A Potted Pet. Now It's Health Food

Ch-Ch-Ch-Chia: Not Just A Potted Pet. Now It's Health Food 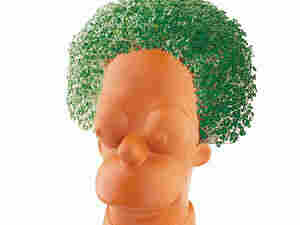 Remember Chia Pets? You know, those sprouting Terracotta kittens, Simpson characters and yes, even presidents and presidential candidates? Well, the tiny seeds responsible for the "pottery that grows" have been springing up recently in the food and dietary supplement aisles of grocery, pharmacy and vitamin shops nationwide.

In the last three years, dozens of snacks, baked goods and drinks containing chia in some form have hit the market. Mintel, a market research group, says it counted 100 chia products on the market in the last three years. The poppy-like seeds, high in Omega-3, 6 and 9 essential fatty acids, fiber and other minerals, have been touted for their nutrition benefits in popular fitness, health and diet circles. Dr. Oz devoted a segment to the seed last fall, no doubt boosting sales.

At Green Acres, an organic food market in Kansas City, Mo., supplements manager Adrienne Freeman recently ordered 20 cases of the seeds. "We blow through them like crazy," Freeman tells The Salt.

So how did chia make its way from cutesy holiday gift to health food craze? It's actually reaching back to its past.

The seed, also known as Salvia hispanica, comes from a flowering plant native to Mexico and Central America. And long before that catchy "ch-ch-ch-chia" jingle ever got stuck in anyone's head, the seed was a staple of the Aztec diet.

"Chia was once so treasured, the Aztecs used to deliver it to their kin in homage. Aztec runners used to chomp chia seeds as they went into battle, and the Hopis fueled themselves on chia during their epic runs from Arizona to the Pacific Ocean. The Mexican state of Chiapas is actually named after the seed; it used to rank right up there with corn and beans as a cash crop."

Joseph Enterprises, the company which brought us the Chia Pet 30 years ago, has long been aware of chia's use in diets, but VP Michael Hirsch tells The Salt it has only been in the last few years, as people "are looking for products to help them eat healthier," that Chia seeds have re-emerged in the nutrition market.

As for claims of it being a high-energy superfood, one that aids with weight loss and other diseases, chia still has a lot to prove.

Also, taken in high doses, there are possible interactions with blood pressure and blood thinner drugs. "I wouldn't call it a miracle food,"she says.

David Nieman, director of the Human Performance Labs at Appalachian State University, agrees. "There's no magic in just adding something like chia to one's diet."

And he should know. In 2009, Nieman studied 90 overweight people over a 12-week period and found the consumption of chia didn't do much for their weight or health status. The study was funded by a chia company. Eating more fruits and vegetables and doing more exercise are still the keys to real health improvements, says Nieman.

"There's a lot of interest in this ancient seed, and I just think it's half wonderful nutrition but half marketing," Nieman says.

So what about digging in to those Chia pet seeds you might have lying around from an old holiday gift? Not a good idea, cautions Joseph Enterprises' Hirsch. They're not cleaned well, he says, and don't go through the same FDA compliance process as the ones sold for eating.