Accessibility links
Starbucks Ditches Bug-Based Red Dye In Strawberry Drink : The Salt Under pressure from vegetarians and vegans, Starbucks plans to stop using a red dye made from crushed bugs called cochineal in some strawberry drinks and rosy-hued baked goods by the end of June.

For those of you boycotting Starbucks over the red dye made from crushed bugs it's been using, this Strawberries & Crème Frappuccino® is for you. 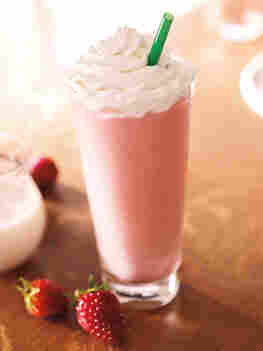 By June, this drink will be bug-free, Starbucks says Armstrong Photo/Starbucks hide caption

As we reported last month, vegetarians and others who'd rather not eat insects protested when they found out the the company uses cochineal, the red "juice" a tiny white bug called Dactylopius coccus exudes when crushed, to color certain food and drinks.

"Our expectation is to be fully transitioned to lycopene, a natural, tomato-based extract, in the strawberry sauce (base) used in our Strawberries & Crème Frappuccino® blended beverage and Strawberry Banana Smoothie," Burrows wrote on the company blog.

It will not look much different and will still meet company taste standards, a spokesman tells The Salt.

Starbucks will also be phasing cochineal out of afternoon delights like Raspberry Swirl Cake, Birthday Cake Pop, Mini Donut with pink icing, and Red Velvet Whoopie Pie by the end of June.

People for the Ethical Treatment of Animals' David Byer, who pushed for the switch, praised Starbucks' announcement. "It will soon be Starbucks Vegan Strawberry Frapps all 'round at PETA headquarters in celebration," he says.

While the red-dyed products likely make up a small portion of the coffee chain's business — the company doesn't publicly break out product-by-product sales, says a Starbucks' spokesman — in the food world, it's all about optics.

"Our commitment to you, our customers, is to serve the highest quality products available. As our customers you expect and deserve better – and we promise to do better," Burrows writes.

Despite the ick factor, cochneal extract is FDA approved and widely seen as a more natural alternative to, say, petroleum-based Red Dye #40 - an argument many pointed out in the comments on our previous post.

But, as they say, the customer is always right. And if the customer doesn't want bugs, Starbucks, for one, is responding.