Accessibility links
The California Taco Trail: 'How Mexican Food Conquered America' : The Salt Once upon a time, tacos were a Mexican snack. Now they're an all-American institution. Gustavo Arellano leads us across Southern California in search of the roots of the American taco. 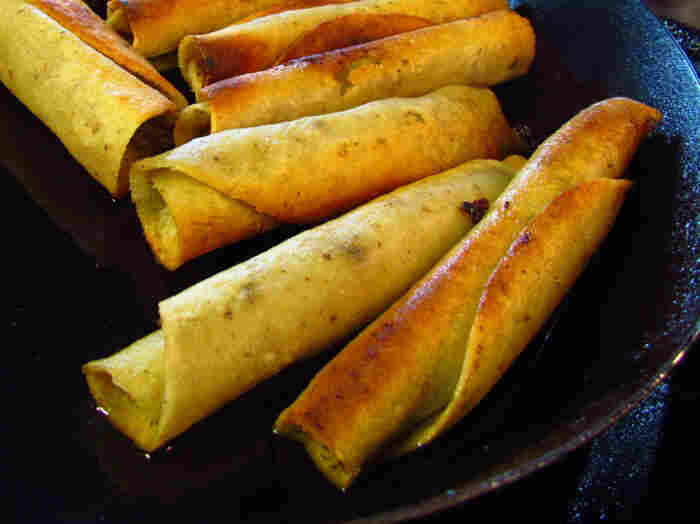 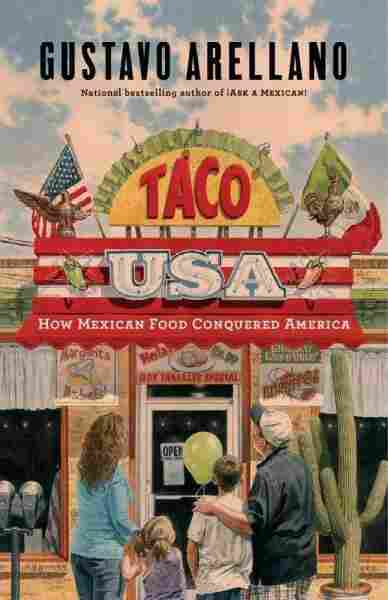 For 50 years, the taco has been a staple of American life. It's in school lunches and Michelin-star restaurants. It even helped launch the food truck craze. So how did the taco come to loom so large in American bellies?

In Gustavo Arellano's new book, Taco USA: How Mexican Food Conquered America, he explains our love of all things folded into a tortilla. I recently joined him for a 150-mile tour of Southern California's taco trail, visiting cultural touchstones in the evolution of the Mexican snack in America. Here's our tour.

Since the 1930s, this tiny stand — located in the heart of historic L.A. — has been famous for its rolled, fried taquitos, covered in avocado sauce. Arellano thinks of the food stand as a Plymouth Rock of tacos, one place where the Mexican staple met a broader American audience.

Today, co-owner Diana Guerrero Robertson still makes them the same way, hand-rolling tacos around seasoned, shredded beef. "They start at our warehouse in Lincoln Heights, where we make our tortillas fresh," Guerrero Robertson says. "Then we hand roll them with our steamed, seasoned beef that's the style of barbacoa. And our salsa is also made there, which is made with spices, chili and avocado."

Cielito Lindo's taquitos quickly gained a following among Mexicans and non-Mexicans alike. "People all over Southern California started copying it," Arellano says. "The exact same way to fry it, the avocado salsa, everything."

Americans had discovered the taco. 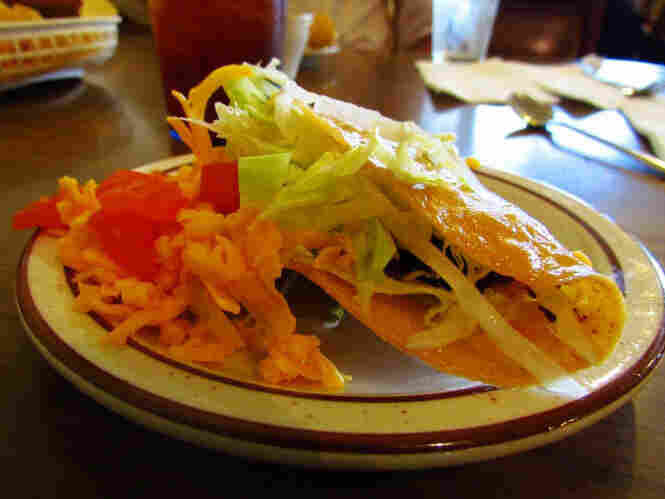 Crunchy tacos are one of the staple dishes served at Mitla Cafe in San Bernadino, Calif. Carolina Miranda/NPR hide caption

From L.A., Arellano takes me 60 miles east, to San Bernardino. It's a horizontal place, full of truck yards and train depots. It's from here that the taco eventually went national.

Taco Bell was launched in an L.A. suburb in 1962 by Glen Bell. Prior to that, he lived in San Bernardino, where he owned a burger stand, and later a small chain called Taco Tia — Taco Bell's precursor. Today, the company, based in Irvine, has 6,500 locations in all 50 states and almost a dozen countries. They sell more than 2 billion tacos a year.

Tom Wagner is a vice president for the company. "If you go more to the Midwest and to the Northeast, often times Taco Bell defines people's experiences with Mexican food," Wagner says. "Even though we call ourselves 'Mexican inspired,' in much of the country, Taco Bell defines what Mexican food is."

The chain helped make Mexican food palatable to a country that had historically regarded it with suspicion, according to Jeffrey Pilcher, a food historian at the University of Minnesota and author of the forthcoming Planet Taco: A Global History of Mexican Food.

"There's this fascination with Mexican food," Pilcher says. Part of that, he says, comes from the sense that it's dangerous. "It's hot, obviously, but there's also this fear that it's contaminated." Glen Bell's great triumph came in franchising and selling Mexican food to a mainstream audience, Pilcher says, in still-segregated 1950s and '60s California.

But where did the recipe for the Taco Bell taco come from? Arellano says he has figured it out — and the answer can be found in San Bernardino.

Here stands Mitla Cafe, a family diner that has been serving up Mexican food since 1937. Mitla's crunchy tacos are strangely familiar: crispy, stuffed with ground beef, iceberg lettuce and a pile of yellow cheese. Irene Montaño is the cafe's owner. Her in-laws started the business.

"Glen Bell had his hamburger stand across the street," Montano says, "and he used to come over here and talk to my father-in-law and ask him how to make tacos and how they did different things — but especially the tacos."

"I could tell, eating this, you could tell why America fell in love with this type of taco so fast," Arellano says.

The tortilla is light and crisp. It dissolves the minute it hits the tongue. 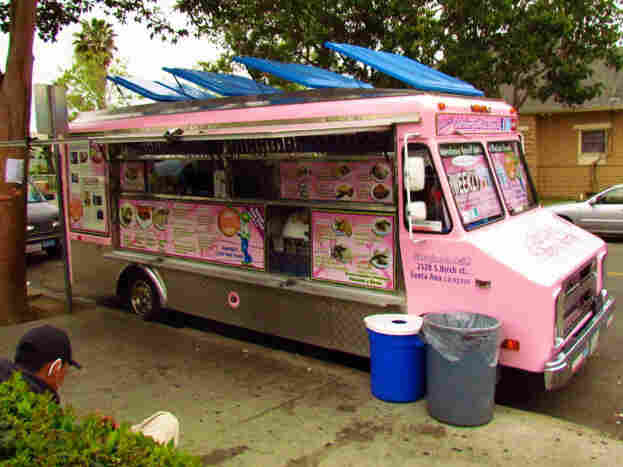 Alebrije's Grill, a taco truck that can be found roaming the streets of Santa Ana, Calif. Carolin Miranda/NPR hide caption

"If Cielito Lindo's little taquito is the ancestor of what we know now as the taco," he adds, "this was the ur-taco, the taco that launched a thousand tacos."

Another 60-mile drive takes us to our last stop, in Santa Ana. It also brings us to the present — to the middle of Southern California's taco truck renaissance.

"If you see a bright pink truck, that's the truck," Albert Hernandez says. "We're the only pink truck here in Santa Ana."

Hernandez is the chef and owner of Alebrije's Grill Taco Truck. For eight years, he has produced a renowned local dish called the Battleship Taco.

The Battleship Taco is the size of a small dog. It's an architectural mass of breaded steak, with rice, grilled onions, roasted cactus and hot sauce — all piled on a fresh tortilla.

Like all of the tacos we've eaten, it's a fusion. The recipe has its roots in Mexico. But the scale and presentation is all U.S.A. Tacos have become so American, they sometimes barely seem Mexican.

"Mexican food is as American as nachos," Arellano says. "You find nachos all over ballparks in the United States. It's just part of the cuisine at large."

There are now spaghetti tacos. Korean tacos. And broccoli pine-nut tacos. The taco, it seems, is right up there with hot dogs and apple pie.