Accessibility links
Eternal Yogurt: The Starter That Lives Forever : The Salt Yogurt enthusiasts are rediscovering heirloom yogurt starters, many of which originated in countries with long traditions of yogurt-making. These bacterial cultures, which live on milk, can regenerate in one batch after another. 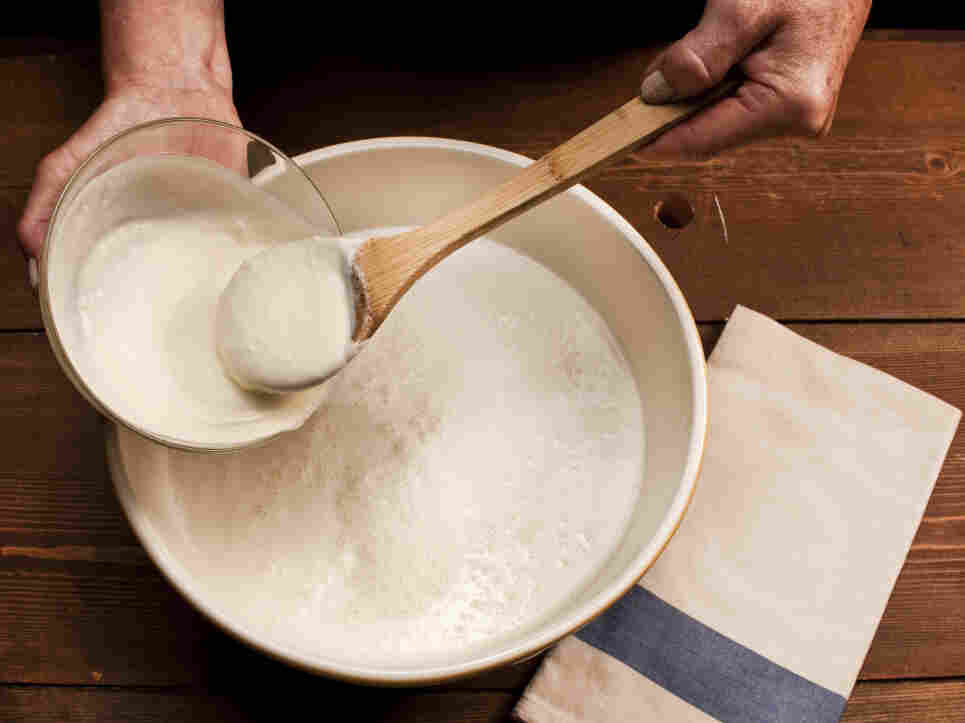 To make yogurt with an heirloom starter, add freeze-dried starter or a spoonful of yogurt to fresh milk. Bill Hogan/MCT/Landov hide caption 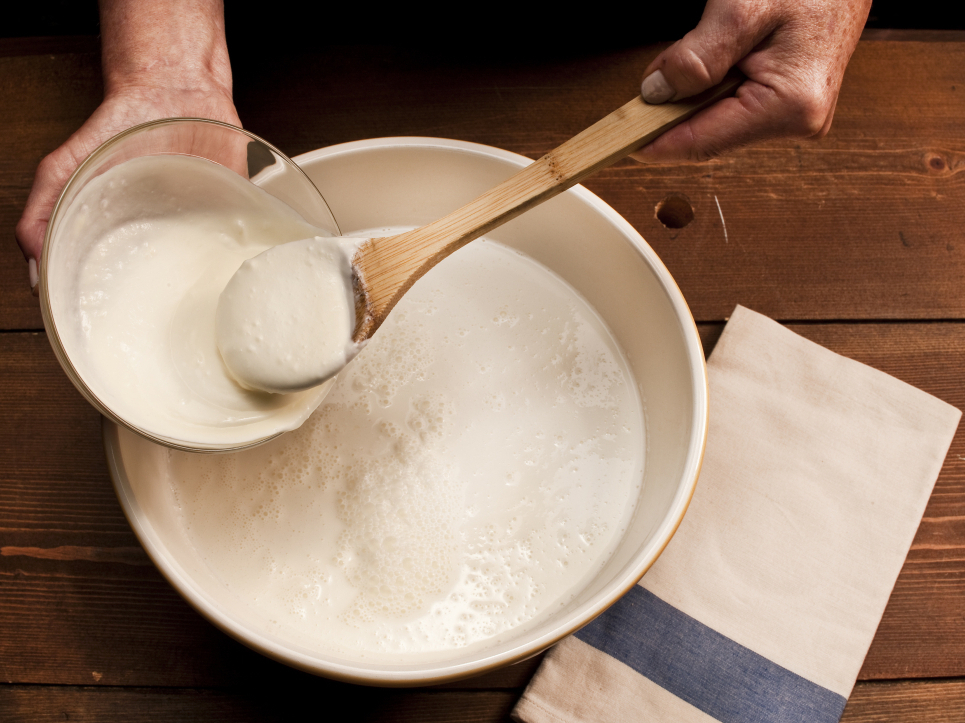 To make yogurt with an heirloom starter, add freeze-dried starter or a spoonful of yogurt to fresh milk.

If you make your own yogurt, there's a chance your yogurt could outlive you.

That's because some bacteria that grow and feed on the sugar in milk – the process that ferments milk into yogurt — can procreate indefinitely in new generations of yogurt.

But not all yogurts have these immortal powers. The typical store-bought yogurt only carries a few strains of bacteria that have been isolated by scientists. Those bacteria on their own can't regenerate very long — maybe just for a generation or two.

That's one reason yogurt enthusiasts are now rediscovering heirloom yogurt starters, many of which originated in countries like Finland and Bulgaria with long traditions of yogurt-making. These bacterial cultures, which live in yogurt or in freeze-dried powders now sold on the Internet, are made up of diverse communities of bacteria that together can take over one batch of milk after another.

Cultures for Health sells heirloom cultures from Scandinavia, Eastern Europe and Western Asia, along with sourdough starters and other live food-making products.

"You're using something to make your food that has been around for a very long time and has been passed down for hundreds of years," says Feickert, who started Cultures for Health with her husband in Vancouver, Wash. "[Yogurt-making] is a lost art, but it's starting to come back."

Heirloom yogurt starters have earned the praise of Sandor Ellix Katz, author of several books about fermentation and one of the most outspoken advocates of the health advantages of eating live foods. Katz tells The Salt he likes the idea of yogurt fermented with a large community of bacteria that has evolved together over time. And he loves the varied flavors — from tart to mild — that make heirloom yogurts distinct from what's available at the store.

But even Katz, whose Tennessee home is a professional workshop for fermented food projects from sauerkraut to kombucha to cheese, says yogurt is demanding.

"I was making yogurt with the Bulgarian and Greek heirloom starters, but then one day I forgot to start a new batch of the Greek, so it died," he says.

Indeed, Feickert agrees, if you're going to start making yogurt, you have to be prepared to start a new batch every seven days to keep the culture going. "They're a little bit like pets; they need regular care and feeding," she says.

But not everyone is convinced that homemade yogurts from heirloom starters are that much different from what's available at the store.

Mirjana Curic, a senior scientist at Chr. Hansen, a Danish firm that develops cultures, dairy enzymes and probiotics for big food companies like Dannon, says there's no evidence the extra bacteria in an heirloom culture will give you better texture, flavor or health.

"The strains used in industrial yogurt cultures are isolated from good quality traditional, natural yogurts, too," Curic says. "We characterize and blend them to get the desired texture, and the very nice consistent flavor, balanced with acidity."

She acknowledges that industrial yogurts also contain sugar, starch and other stabilizers because they have to survive on the shelf for 40 to 60 days and be transported across the country.

Still, she says, "some products on the market are all natural and very close to what real yogurt should be — what would be recognized by my grandmother as yogurt."

She means her Serbian grandmother, who made yogurt the old way, with the same heirloom Serbian starters over and over again.