Accessibility links
What Pizza Hut's Crown Crust Pizza Says About Global Fast Food Marketing : The Salt Pizza Hut's latest offering, available only in the Middle East, is a cheeseburger-pizza hybrid. The combination either makes foodies' stomachs turn - or growl. But from a global perspective, it's not that different from how ethnic cuisines are marketed in the U.S. 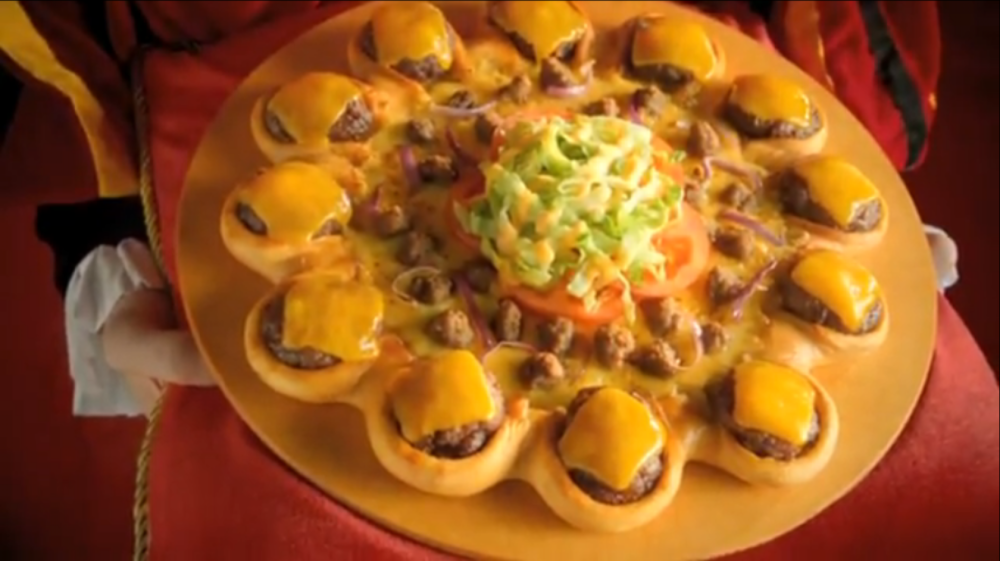 Perhaps you've heard by now of the Crown Crust pizza, the pizza-cheeseburger hybrid recently unveiled by some of Pizza Hut's international franchisees. Available only at Pizza Hut Middle East, this fast food chimera features a vaguely crown-shaped crust studded with "cheeseburger gems," topped with lettuce and tomato, and drizzled with "special sauce."

Many foodies have decried it as a "culinary abomination," "a sign of the apocalypse," or proof that America is finally losing its monopoly on gluttony. A reviewer at Serious Eats, who tried the Crown Crust in Dubai, wrote: "There seems to be no rational explanation as to why this pizza was created."

But Leila Hudson, director of Middle Eastern and North African Studies at the University of Arizona, and a restaurateur herself, says the Crown Crust probably looks a lot less bizarre to Middle Eastern consumers than it does to us.

It's actually pretty similar to the way ethnic cuisine is marketed to the U.S., Hudson tells The Salt. She calls it "the China Buffet Effect," after those all-you-can-eat establishments where Americans pile lo mein and Kung Pao chicken next to crab Rangoon and fortune cookies, without regard for regional boundaries. The average Chinese person might find it weird to put those foods together on one plate. But to the average American, who can't tell Szechuan from Hunan cuisine, it's all just "Chinese" food.

Similarly, in the Middle East, pizza and burgers equally conjure up the exotic national identity of "American" cuisine. Why wouldn't you eat them together?

Pizza Hut did not provide much information on the origin or intent of the new product when we asked, but it did email us this statement: "The chefs at Pizza Hut make it great with pizzas featuring different toppings and styles to match global tastes."

Despite the hype, the Crown Crust is neither the first, nor the weirdest gimmick that international franchisees have used to make pizza more palatable to local consumers.

There's the Indonesian version of the Crown Crust from 2010, which had breaded chicken fingers, mozzarella sticks, and honey mustard sauce in place of cheeseburgers. And the Korean Shrimp Roll pizza from 2007, featuring what looks like a ring of three dozen whole fried shrimp, each perched atop a detachable "cheesy bite" crust segment.

Or 2009's Golden Fortune Cheesy Crown from Malaysia, with prawns, fish, pineapple, and a cheese-puff crust you can use to win over your reserved mother-in-law during Chinese New Year (at least, it works for the young woman in the commercial).

Hudson says international brands like Pizza Hut are trying to appeal to an emerging global middle class. Pizza has a leg up on other fast food options in cultures where meals are often communal, she says, like the Middle East.

"You would typically order for the entire table," Hudson says. Pizza fits the mold because "everyone is eating basically from the same plate." Nevertheless, she says, the latest Crown Crust is "a Frankenstein monster of marketing trends that's probably too clever by half."

And if previous attempts to force burgers and pizza to coexist are any indication, it may not be long before the Crown Crust crumbles. If you blinked, you may have missed the time McDonald's sold pizza.