Accessibility links
How To Tiptoe Into The Hot Sauce Craze : The Salt Hot sauce is one of the fastest growing industries in the U.S., and there are thousands of connoisseurs out there who call themselves chili-heads. If you're not one of them, but you'd like to learn, our experts offer some tips on how to start. 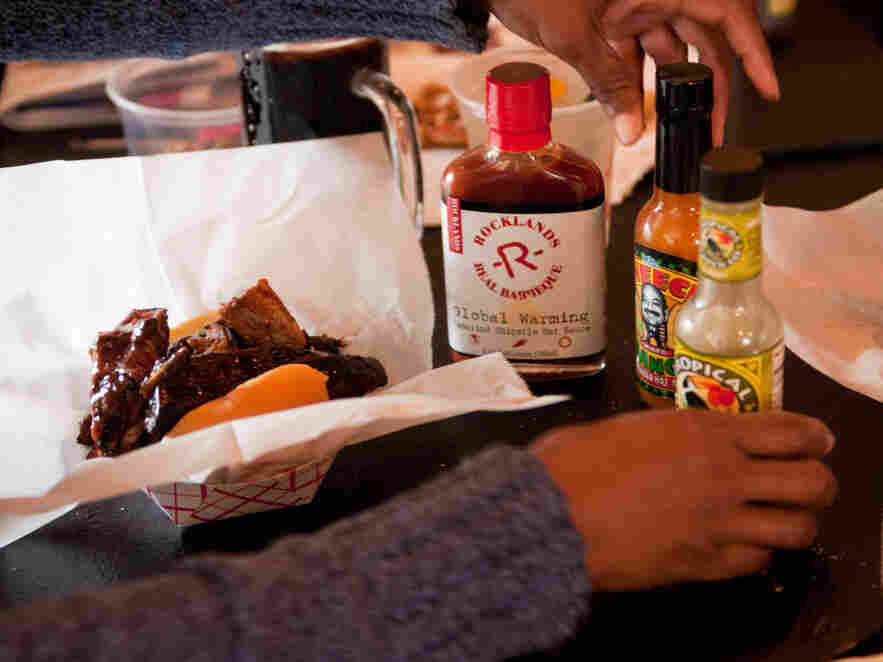 If you listen to my story above, you'll know that hot sauce production is one of the fastest growing industries in the United States.

And you'll learn that research finds chili-heads — people who love the burn of spicy food — tend to have a penchant for sensation-seeking. Think rollercoasters and action flicks.

So you wanna jump in, but you're new to the hot sauce world?

Well, I'm a newbie too, and I've compiled this list for the uninitiated. Maybe these will help you tiptoe up the staircase of heat. And remember, it's not all about the burn.

"Add several drops into food while you are cooking," says Tony Simmons, president of McIlhenny Co., maker of the iconic Tabasco sauce. "The heat will not come through, but the flavor will."

2: Start with mild sauces that help you focus on flavor, not heat

Scott Roberts, creator of a self-titled blog popular with chili-heads, gave us his list of suggestions for some mild, savory elixirs to start with. On his site, you'll also find his Scoville Scale Chart for Hot Chile Peppers and Hot Sauces. 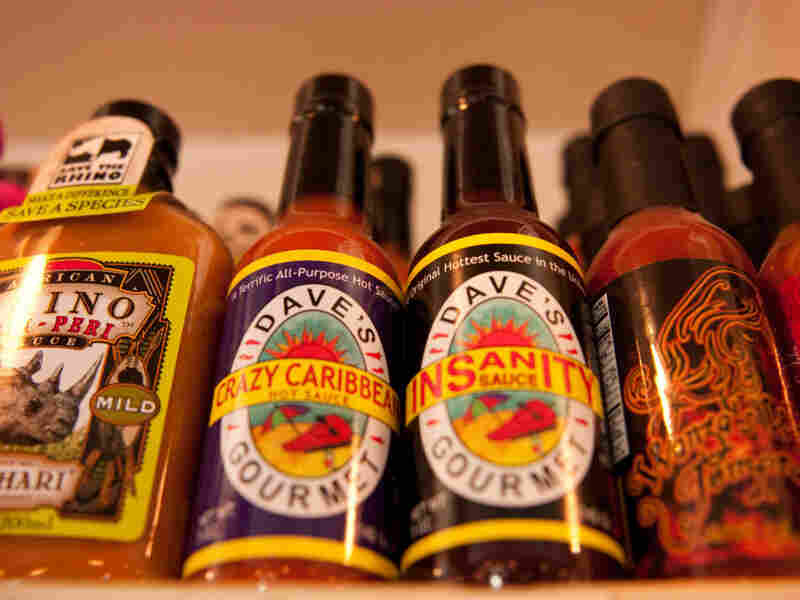 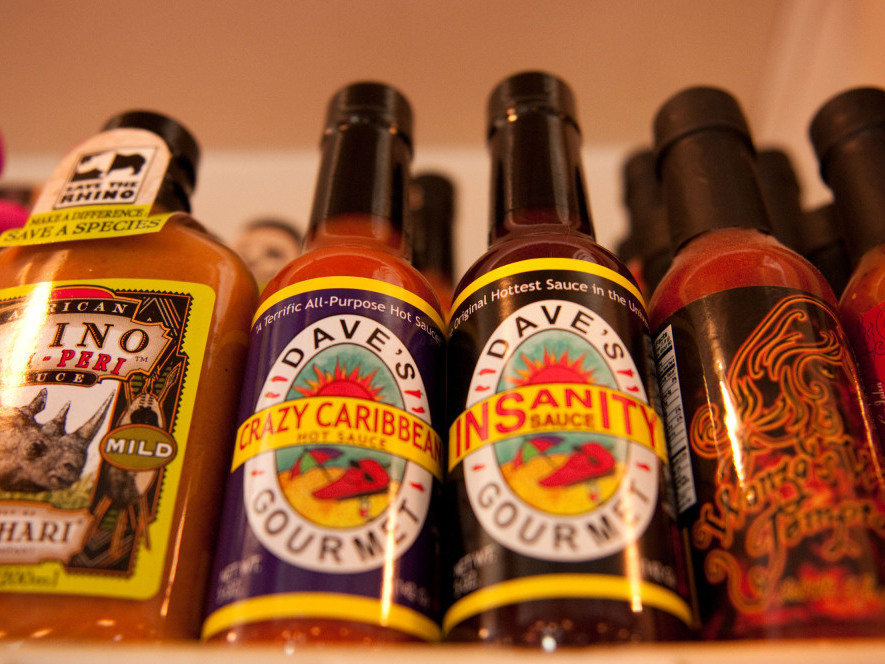 Dave's Insanity Sauce, touted as the hottest sauce on the market.

He says if you know someone who believes hot sauce exists only to burn your mouth, then have her try Georgia Peach and Vidalia Onion Hot Sauce. "Give her some of this, and she will completely change her mind." (Felt like he was talking to me.)

3. Create your own condiment with hints of heat

"Co-mingle sriracha with mayo," says Peter Moore, editor of Men's Health. It's creamy goodness and a spark of bite, he says. "Awesome spread for a bland turkey sandwich."

Keep trying it, says Washington food writer Nycci Nellis, and you'll likely be able to build up your tolerance.

"I started with Uncle Brutha's green hot sauce, which is a mild sauce that lends a subtle smoke," Nellis told me. "Now I regularly use sriracha, aka rooster sauce, and other more intense hot sauces in my cooking."

5. Taste before you douse

Don't ruin your food by dousing it in a hot sauce you've never tried, says John Snedden of Rocklands Barbeque and Grilling Company.

"Before you take a bite of anything, dip your fork into the hot sauce," says Paul Kita, aka Guy Gourmet. If you put a tiny bit on the tine of your fork and give it a taste, you'll be able to gauge the heat. "This way, you're reducing the risk of taking a tongue-searing bit of heat."

6. Respect the peppers that are too hot for you

"It's fairly easy to take steps up the ladder of heat," says John Hard, of Cajohns Fiery Foods. He's collaborated with folks at the Chile Pepper Institute to introduce sauces made from some of the hottest peppers on the planet.

"Remember, habanero is just the start of the upper echelon of heat!" says Hard.

Smoke Canyon Gourmet Smoked Jalapeno Sauce: Another great green/jalapeno sauce. This adds a touch of roasted/smoked jalapeno flavor without veering too much into chipotle territory.

CaJohn's Gourmet Chipotle Hot Sauce: Another great offering from CaJohn's Fiery Foods. Lip-smacking tasty and smokey, this one does well on burgers, steaks and nachos.

Georgia Peach and Vidalia Onion Hot Sauce: This obliterates the lines between hot sauces, barbecue sauces and steak sauces. It's all of those, but so much more. This sweet, savory blend is fruity, rich, and most importantly, delicious. Georgia Peach and Vidalia Onion Hot Sauce is fantastic on everything from tacos to pulled pork. Do you have a wife or significant other who hates hot sauces or thinks that they exist solely to burn your mouth? Give her some of this, and she will completely change her mind.

Cholula: Hey, just because this is a highly recognized, readily available brand doesn't mean it doesn't deliver the goods. Richer than the "pepper-colored vinegars" that populate the sub-genre of hot sauces known as Louisiana Style, this flat-out tastes great and packs a mild-medium spice punch.

Ott's Original Wing Sauce: I've praised Ott's Buffalo Wing Sauce in text, in audio and on video. If you know me well, you know that I love Ott's. For beginners, this product is a nice hint at what buffalo sauces should really be. Forget all the other watered-down pretenders lining your supermarket shelves; Ott's has a superb flavor, a rich 'n' creamy texture, and won't burn your tongue. Its gentle heat will merely provide a spicy tingle while your taste buds are sent to heaven.