Accessibility links
The Secret Life Of California's World-Class Strawberries : The Salt We may romanticize that strawberries are grown down the road, but most of them come from California. And a complex web of plant cloning practices, relocation and fumigation has cropped up to keep it that way. Although scientists are exploring new options, like soil-free growing. 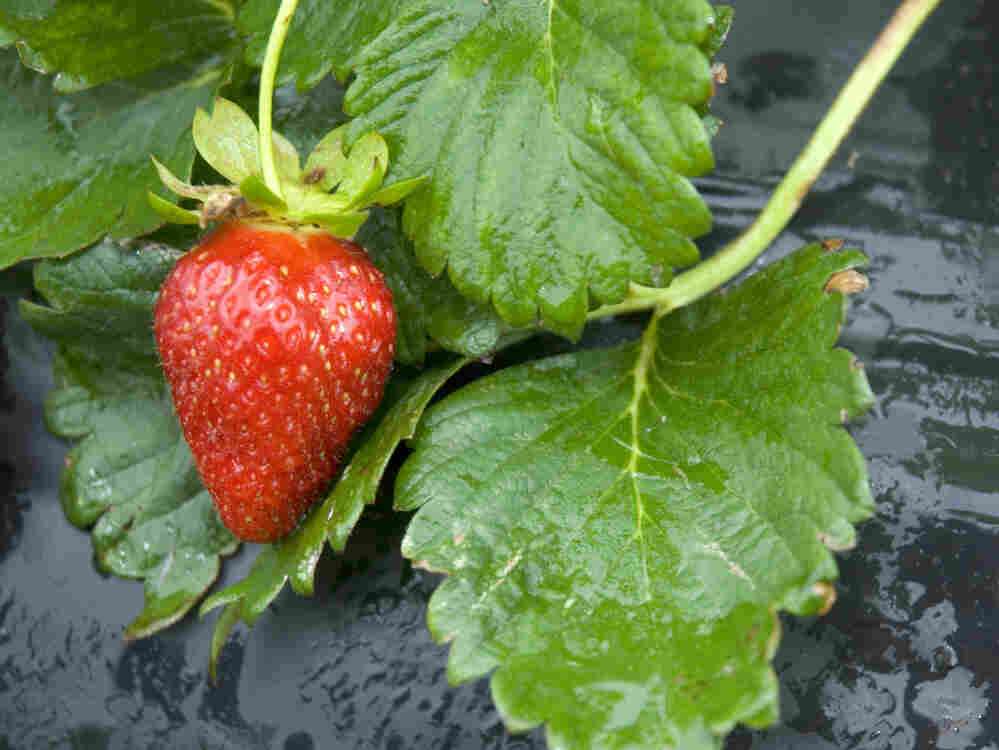 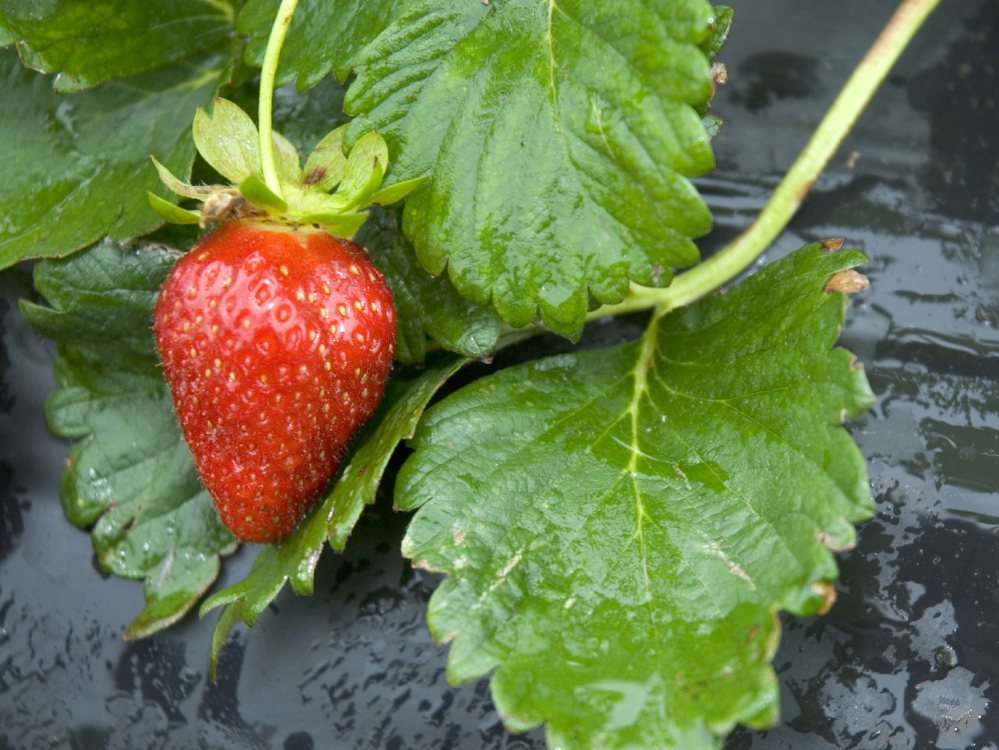 May is the month we see strawberries explode in the market. There are strawberry festivals in every corner of the nation celebrating the juicy ruby beauties, and Strawberry Queens crowned galore. Those traditional harvest time festivals make us think our strawberries are mostly grown on the farm just down the road.

But in fact, one state — California — supplies 80 percent of America's strawberries, and the percentage is growing.

The reason? California's fields are stunningly productive. They yield ten times more strawberries, per acre, than strawberry farms in Michigan; twenty times more than farms in the state of New York. And there's a complex web of reasons why.

It's a miracle of agricultural technology. But that technology is not as universally loved as the fruit.

It starts with the plants themselves. That strawberry you just bought at the supermarket traces its ancestry to a microscopic particle of plant tissue that somebody cut from the tip of a growing strawberry stem five years ago.

That tiny bit of strawberry stem went into a little glass petri dish and grew into a new plant. Then it sent out dozens of little daughter plants called "runners." 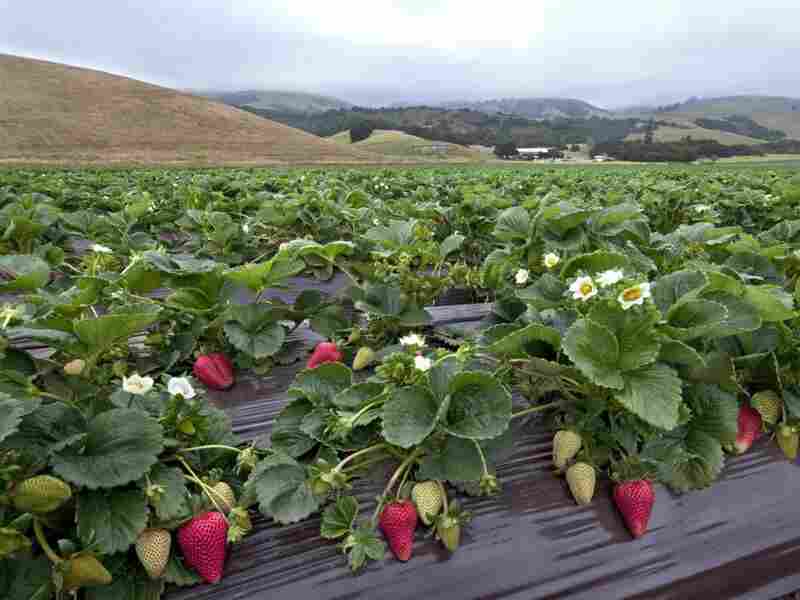 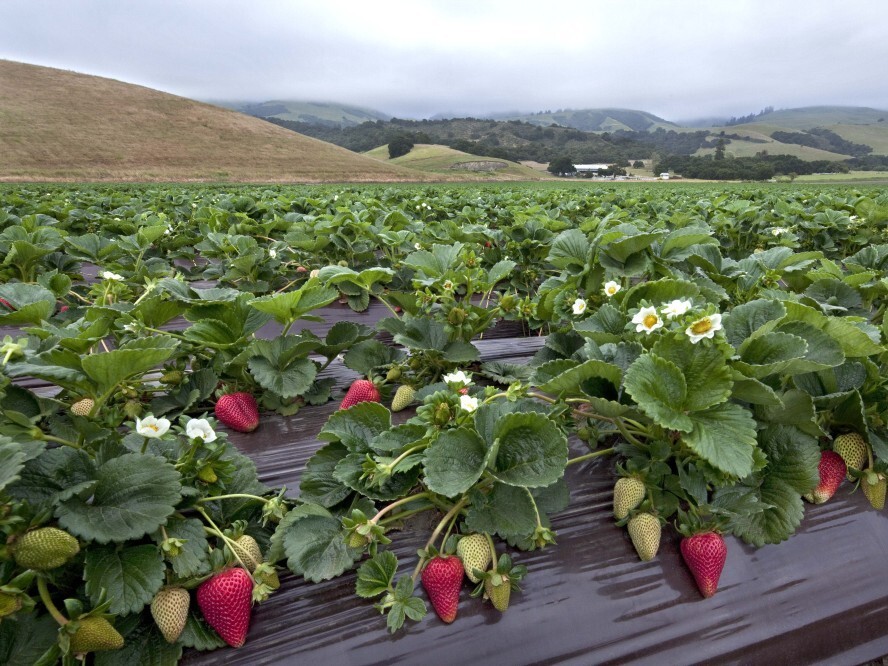 "Those runners are basically clones of the mother," explains Daren Gee, owner of Daren's Berries in Santa Maria, California, whom I caught in the middle of his peak harvest time. "And then they plant those, and take the daughters off of that one, and do it again and again and again."

The whole process takes years. The plants are multiplied first in carefully controlled greenhouses; then in fields in the heat of California's Central Valley. Finally, the plants are trucked up into the mountains along the California-Oregon border. It's cold up there, which is crucial. Somehow the cold gets these plants primed for maximum production.

And all along this chain of clones, from petri dish to final harvest, people are working obsessively, even fanatically, to protect these plants from disease.

Because California's strawberry growers don't want to take any risk that their crop will fail. They have too much money invested — especially in prime growing areas along the coast where land is most expensive. (That's because humans and strawberries are competitors. We both are drawn to a climate with mild days and cool nights.)

So every year, a month before planting time, fumigation machines move slowly across California's strawberry fields. They inject chemicals into the soil and seal the fumes into the soil with sheets of plastic.

The chemicals kill practically everything in the soil: Insects, weeds, and fungi like the fungus that strawberry grower Daren Gee has been fighting this year. That particular disease is called Fusarium Wilt.

Why Are Strawberries Getting Bigger And Blander?

All Things Considered host Melissa Block asked Marvin Pritts, a horticulture professor at Cornell University, about why it's happening.

Why the diminishing flavor?
"Over the last 100 or so years, people have been breeding strawberries for various important traits — size and yield ... maybe color, disease and insect resistance, flavor. And as you select and try to improve one, oftentimes one of the others has to be sacrificed slightly to make progress."

Is the bright red color natural?
"There's nothing chemically-induced, but a strawberry that's not quite fully red will turn red, even after sitting on the shelf. And that's why the color is sometimes deceiving; it doesn't necessarily mean it's fully ripe and fully flavorful."

— Listen to the whole interview here.

"Fusarium Wilt is like the Great White Shark of the soil," says Gee. "It's floating around in there, and then it just gobbles up your plants."

Organic strawberry growers don't fumigate. They stay a step ahead of diseases by moving from field to field. This also means that they only get to grow strawberries on a particular field once every three to five years, or sometimes even longer. Yet even California's organic strawberry growers buy their plants from nurseries that do use fumigation. Nobody wants to run the risk of bringing diseased plants into their fields.

This technology has done wonders for strawberry production. But it's under attack. And it may have to change.

The most powerful fumigant — methyl bromide — is supposed to be phased out gradually because it can eat away at Earth's ozone layer. It's still used under a "critical use exemption" that the Environmental Protection Agency has obtained each year.

Also, regulators are telling growers to move their fields and their fumes further away from homes and schools. Lea Brooks, a spokesperson for California's Department of Pesticide Regulation, says that's squeezing the strawberry fields. "People are moving closer to farmland, and hence the conflicts," she says. "It's important to find alternatives to fumigants because in the future there will be additional restrictions, not less."

Brooks and I are inspecting some of those possible alternatives in a research field that the California Strawberry Commission has set up near Watsonville, California.

Dan Legard, the commission's Director of Research and Education, is in charge of this work. "As you look at the field, it looks like a regular strawberry field. You don't see any difference," he points out.

This field has the same raised beds covered with black plastic, with strawberry plants poking out of holes in the plastic.

What you can't see, though, is the fact that these plants aren't actually rooted in soil at all. They're growing in a foot-wide trough that's been pressed into the top of each bed, lined with fabric, and filled with peat or something called coconut coir — the fibers from the outside of a coconut.

Legard walks over to one bed and pulls out a handful of coconut coir. It's black and sponge-like, a little bit like peat.

It mimics soil's ability to hold water, but it's not soil. Which is the point. There aren't any frightening fungi in there, so there's no need for fumigants drive those pathogens away.

There are other approaches as well. Some have used the heat of the sun to sterilize the soil. Others are experimenting with mixing ground-up seeds of canola plants into the soil. Those seeds release a chemical that suppresses harmful fungi for a while.

But commercial strawberry growers are skeptical about all of these methods. The ones that work reliably — like growing plants in coconut coir — are really expensive, and the ones that are cheap sometimes fail.

"It may work four out of five times, and that looks great to a researcher," says Dan Legard. "But that means twenty percent of the growers fail. And no grower's going to take that twenty percent chance when he's investing a million dollars."

So for now, most of California's strawberry growers are sticking with the chemicals. It's been a key to their success in producing more strawberries, for a lower cost, than anywhere else in the world.