Accessibility links
U.S. Craft Beer Brewers Thrive, Despite Small Share Of The Market : The Salt It's a good time to brew beer in America. According to beer expert Julia Herz, U.S. brewing isn't just on the upswing, it's on top. "We're now the No. 1 destination for beer, based on diversity and amount of beers," she says. And the industry's fastest growth is in craft breweries. 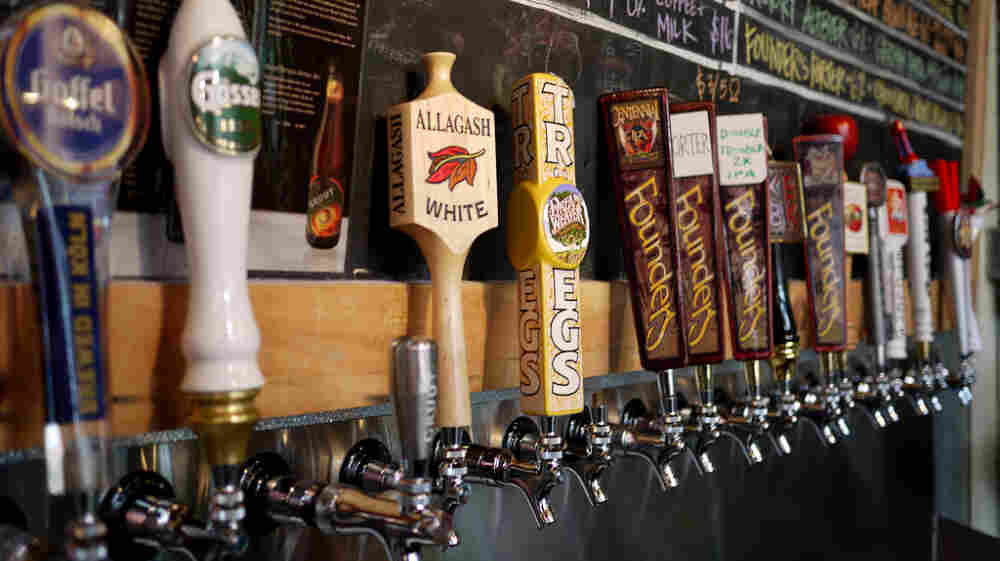 A row of taps highlights specialty and imported beers at Brouwerij Lane, in Brooklyn, New York. Craft brewers have found a way to thrive, even as the U.S. economy struggles. Bill Chappell/NPR hide caption 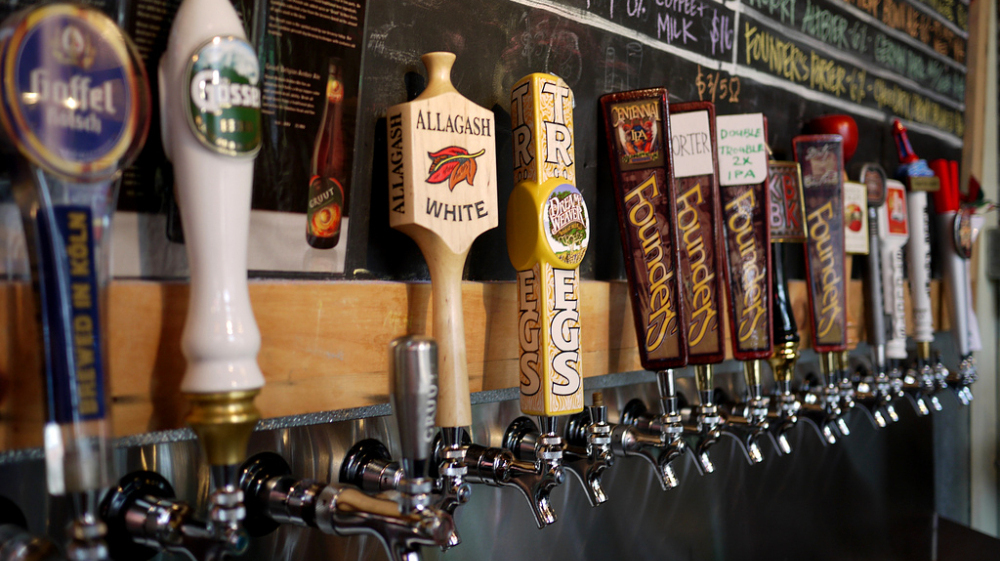 A row of taps highlights specialty and imported beers at Brouwerij Lane, in Brooklyn, New York. Craft brewers have found a way to thrive, even as the U.S. economy struggles.

It's a good time to brew beer in America. According to beer expert Julia Herz, U.S. brewing isn't just on the upswing, it's on top. "We're now the No. 1 destination for beer, based on diversity and amount of beers," she says.

But if you want to see the strength of America's beer industry, you may want to look past beverage giants like Anheuser-Busch and MillerCoors. According to the Brewers Association, nearly 2,000 American brewers operated during 2011 — the most since the 1880s.

That growth has come in only a few decades. And it has propelled names like Sierra Nevada and New Belgium Brewing into the top 10 U.S. brewers.

"We had 42 brewing companies in 1978," says Herz, craft beer program director at the Brewers Association and publisher of CraftBeer.com. "So, these are wild, amazing historic beer times. Of the 2,000 breweries in existence, 1,000 are brewpubs. It's a testament to the fact that beer has gone local."

We should note that craft beer still occupies a niche in the beverage industry — its share of the beer market rose just above 5 percent for the first time this year. But sales grew by 15 percent in 2011.

It seems more consumers are willing to skip buying cheaper beer in mass quantities in favor of buying a higher-quality product. That analysis is explored (and explained visually) by Lam Thuy Vo, over at Planet Money.

But what makes a beer a craft beer? Many drinkers, both professional and amateur, will assure you that they know a craft beer when they drink it. But few agree on how to decide which brewers should be called "craft." Herz calls it an inclusive category.

"The bottom line is, we don't define what craft beer is. Craft beer is different things to different beer lovers," she says. "To me, it's small-batch beers made on a local or regional level."

Of some 2,000 U.S. breweries, only about 50 don't meet the Brewers' Association's standards for a craft brewer. The criteria is that the brewery produce fewer than 6 million barrels of beer a year, and be independently owned.

Where The Brewers Are

The Brewers Association finds that states in the Midwest and Northwest support particularly strong beer cultures. And five states that have the most craft breweries per citizen might be called the craftiest of the crafty:

"The surprise, always to us, every year — and it's been on the list for several years — is Vermont," Herz says.

For proof of Vermont's love for beer, consider that the state's renewed love affair with maple syrup beer — a unique brew made at the end of the spring "sugaring" season, as Steve Zind reported on All Things Considered this week.

As they gain more customers, craft breweries are also helping boost regional economies — pint by pint, and bottle by bottle.

"On the small local level, the majority of breweries are 'mom-and-pops.' They employ 10 to 50 jobs, on average," Herz says. "So when you talk about hard economic times, you've got a community of brewers that have more demand than supply — even despite the last 3-4 years of challenged economic times."

It's a start. The New York Times reported on how the famed Deschutes Brewery has helped create a Bend, Oregon beer scene an helped to establish Deschutes County as a sort of "beer tourist" destination.

So in honor of American Craft Beer Week, which ends Sunday, check out this Google Map of participating brewpubs and restaurants at the Brewers Association site.