Accessibility links
Nuclear Tuna Is Hot News, But Not Because It's Going To Make You Sick : The Salt The amount of radiation found in Pacific bluefin tuna spawned near Fukushima does not threaten our health, despite today's suggestive headlines. What a new study shows is that scientists can rely on tiny amounts of radiation to track animals across great distances. 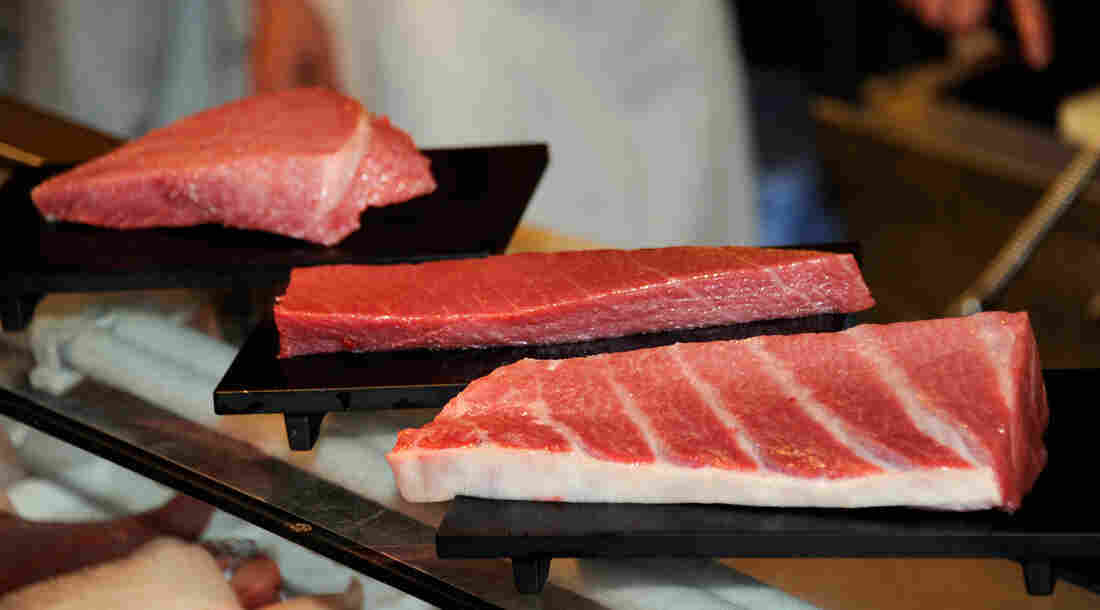 What snarky headline writer could resist a story about "hot tuna?" Or how about "tuna meltdown?"

Really, it seems just plain daffy to ignore a new study that says some Pacific bluefin tuna picked up traces of radioactive material from the Fukushima nuclear disaster last year and brought it across the Pacific Ocean.

And while, as a rule, we avoid making light of nuclear disasters, the tuna story is actually just plain curious, rather than threatening, once you understand the context.

You see, Pacific bluefin tuna spawn off the coast of Japan. They are superb swimmers, so in a few months time, they make it across the Pacific to the coast of Mexico and Southern California to feed — and then get caught. They are also delicious, pricey and on the verge of population collapse, according to Monterey Bay Aquarium Seafood Watch.

Last summer, scientists bought 15 of these beautiful fish from the docks in San Diego to check them for contaminants.

Fish do carry contaminants. Most significant from the standpoint of public health is methyl mercury, which is a neurotoxin. It's especially a risk for developing fetuses, which is why the U.S. government urges women of child-bearing age to limit their tuna consumption. 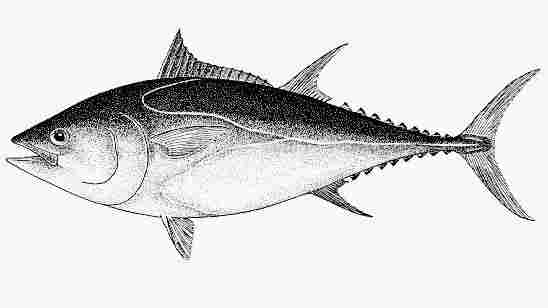 The researchers are still waiting for their mercury results on this particular batch of fish. But Monday they published other findings in the journal Proceedings of the National Academy of Sciences.

Sure enough, the tuna from Japan had picked up traces of radioactive cesium, according to Nicholas Fisher and Zofia Baumann at Stony Brook University, and Daniel Madigan at Stanford University, who co-wrote the article.

The cesium was a blend of two different varieties – cesium-134 and cesium-137. The exact mix of these isotopes creates a signature showing that the radiation came from the multiple meltdowns last March in Fukushima.

Fisher says they weren't actually worried about radioactive cesium as a health risk. They tested the flesh, "mostly just to see if it we could detect it, and we were quite surprised, I must say. We did not expect to see this radioactivity retained by the fish during their trans-Pacific voyage, which we estimates takes from three to four months."

Yes, radiation in seafood seems scary. But here's the catch (if you pardon the expression). Tuna, like every other food on the planet, already contains naturally occurring radiation. It has potassium-40 and polonium-210. It always has and it always will. In addition, seafood in general contains a trace of cesium-137 left over from nuclear weapons testing in the 1950s and 1960s.

So the question is, how much more radiation did these particular tuna fish contain? The answer is: A trivial amount. In fact, radiation from the cesium is 30 times less than the radiation that's already in the fish naturally in the form of potassium-40, according to the research paper. And the natural polonium-210 packs a radiation dose 200 times larger than the dose from the cesium.

Really, the result is a testament to how well scientists can now measure tiny amounts of radiation. And of course it's a remarkable lesson in how wildlife can be traced using accidental "tags" instead of using the labor-intensive plastic ones.

If you are still worried about the cesium from Fukushima, Robert Emery at the University of Texas Health Science Center at Houston says you'd need to eat 2.5 to 4 tons of tuna in a year to get a dose of cesium-137 that exceeds health limits. That's a lot of sushi.

Yes, bluefin is used primarily for sushi. And, much of the Pacific bluefin tuna that's caught off the coast of Mexico and Southern California is shipped right back across the ocean, to be sold at the lucrative seafood markets — in Japan.

For more on this story, tune in to my piece on Morning Edition tomorrow.