Accessibility links
The Storied History Of A Tunisian Tuna Pastry Called Bric : The Salt The Tunisian bric is just one of many stuffed pastries eaten daily across the former Ottoman Empire.

The Storied History Of A Tunisian Tuna Pastry Called Bric

The Storied History Of A Tunisian Tuna Pastry Called Bric 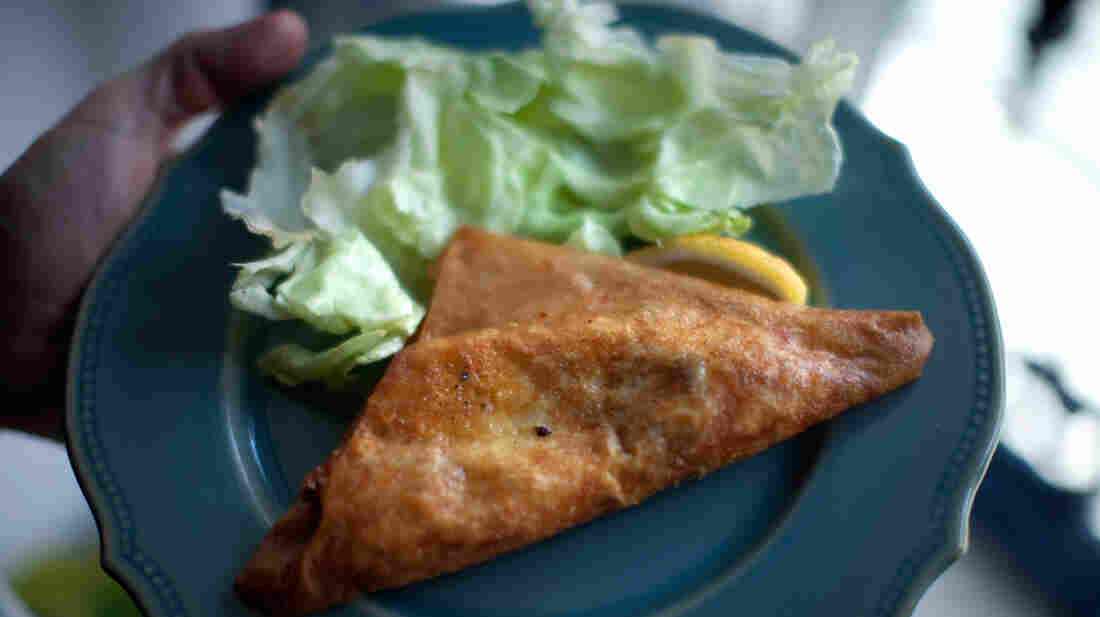 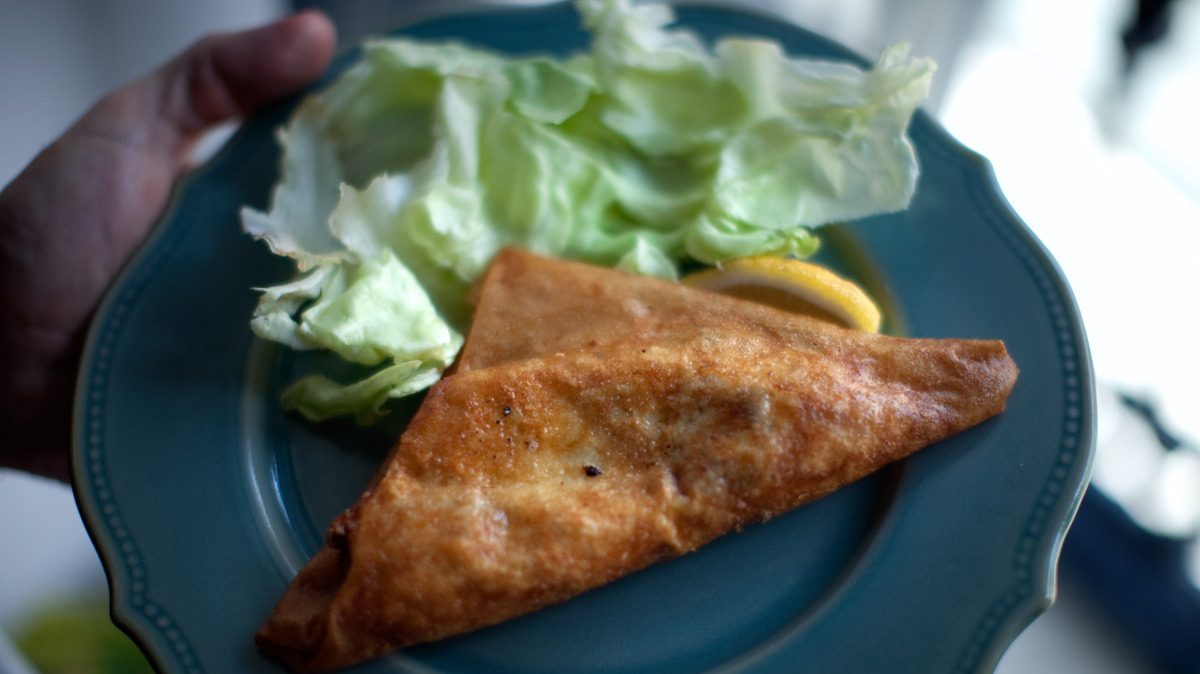 Over the next couple of weeks, NPR Morning Edition host Steve Inskeep is taking a Revolutionary Road trip across North Africa to see how the countries of the Arab Spring are remaking themselves after revolutions last year.

Steve and his team are traveling some 2,000 miles from Tunisia's ancient city of Carthage, across the deserts of Libya and on to Egypt's megacity of Cairo.

In between stories on changing economies, new political systems and emerging social rules, Steve is also sharing with us here at The Salt what he's been eating, and tapping us for insight.

From Tunis, where the trip begins, he sent this bulletin back to us in Washington:

"I have been eating a food known as bric (pronounced breek). Here's how you make bric. You take some canned tuna (yes, canned, though it's an awfully good class of tuna). You lay the tuna on a flat pastry. You break an egg over it. You may add capers. Then you fold the pastry over it all to make a triangle. And you deep-fry it.

My traveling companion John Poole has sent you some photos of a rather upscale brica (that's one bric) from a nice restaurant, but it's also a simple food you can eat anywhere. You eat it with your hands, like fried chicken, though this requires some skill because the egg inside is still runny.

I know it requires some skill because a good portion of my first brica ended up on my lap. Still I enjoyed what I ate; bric are served hot, the tuna was strongly flavorful (Tunisian tuna is to American tuna as espresso is to coffee, with a similar flavor but much more concentrated). It was also moist - the runny egg must have helped with that - and really, what's not better when deep fried? Bric are normally an appetizer or first course; but each one is large enough that the second time I ate a brica, I just had it for my meal. With a knife and fork.

This is practically a Tunisian national food, and it's said that Muslims in particular eat it during the holy month of Ramadan to break their daily fast.

However I'm not sure of the origin of bric. One unconfirmed story holds that it was originally a Jewish food - which is entirely plausible given that Tunisia once had a big Jewish population.

So that's my question: What's the origin of bric?"

Now, we like a bit of culinary sleuthing here at The Salt, but this turned out to be pretty deep stuff.

These gooey savory parcels are the Tunisian version of what culinary historian and cookbook writer Claudia Roden, in her Book of Middle Eastern Food, calls "a vast family of glorious little pastries, half moon shapes, triangles, fingers, small pots, little parcels of all types, as well as medium sized pies and enormous ones" that are eaten all across the vast region that was once the Ottoman Empire.

You can tuck into the local equivalent of bric (or brik, borek or burek) pretty much everywhere from the Balkans to Egypt, and between Georgia and the Adriatic. Whatever your religious or ethnic roots and sympathies, there is pie or pasty just for you.

There are pastries filled with every variety and permutation of ground meat, beans or cheese, and local combinations of vegetables, herbs and spices. Some contain eggs; some are made of bread dough rather than pastry. Your pie may be baked rather than fried, sweet and sticky, rather than savory, or poised somewhere in between, mixing fruits and meat.

But they're all variations on the same ancient theme. Take a flat piece of dough, wrap it around something sustaining and flavorful - and cook it however you can. At its most basic, this suffed envelope is a robust portable lunch; at its most delicate, you have a pile of dainty snacks or appetizers.

The basic filled pastry dates back to the kitchens of prehistory. For centuries, every new civilization, empire, religion, trade route and movement of people added its own twist and claimed a version as their own. Somewhere along the way empandas spun off and spread to South America, samosas blossomed in India, and England got its Cornish pasty.

The tissue thin pastry leaves called maslouqua in Tunisia are made precisely the same way as Chinese springroll skins says Middle Eastern food expert Paula Wolfert. The Arabs, who first brought it it to North Africa in the Middle Ages learned it from the Persians, who may, she speculates, have learned it from "the same Chinese who taught them the secrets of ice cream and sherberts."

It is not, Wolfert says, to be confused with Greek phyllo dough.Versions of these pastry leaves also reached France and Central Europe. (Think French millefeuille and the strudel of Central Europe.)

Often dishes like bric loop back in new forms. Sephardic Jews learned how to make empanadas in Moorish Spain and brought their adopted pastries with them to add back to the mix wherever they settled - including - of course, Tunisia. And modern Jews have taken their Ottoman pastries on with them to Israel, where they are now popular at bar mitzvahs and weddings, says Roden in her book, The Book of Jewish Food: An Odyssey from Samarkand to New York.

And yes, bric and its many relatives are popular foods to begin the evening meal during Ramadan not just in Tunisia, but throughout the Muslim world.

As for Tunisian bric, Paula Wolfert writes in Good Food From Morocco, "it is utterly delicious and unique." It may contain anything, but she tells The Salt in an email that tunafish is especially popular as it's the country main fishing catch. The shoals pass this section of coast in May and June, and they're caught and canned for use the rest of the year.

Unfortunately, we weren't able to confirm the following delicious tidbit from Wikipedia:

"The Tunisian tradition is that the bride-to-be's mother makes a brik for the potential bridegroom. If the bridegroom eats it without spilling any of the egg yolk, he may marry the bride."

Sounds like you would have failed that test, Steve.