Accessibility links
Small Brewers Work To Stay Crafty; Local Is Optional : The Salt It's a good time to be a craft brewer, as Americans are thirsty for full-flavored and local beers. But when small breweries grow, they can also risk losing some of the "craftiness" their fans love. And when they expand, many brewers have to rewrite their recipes — starting with the water. 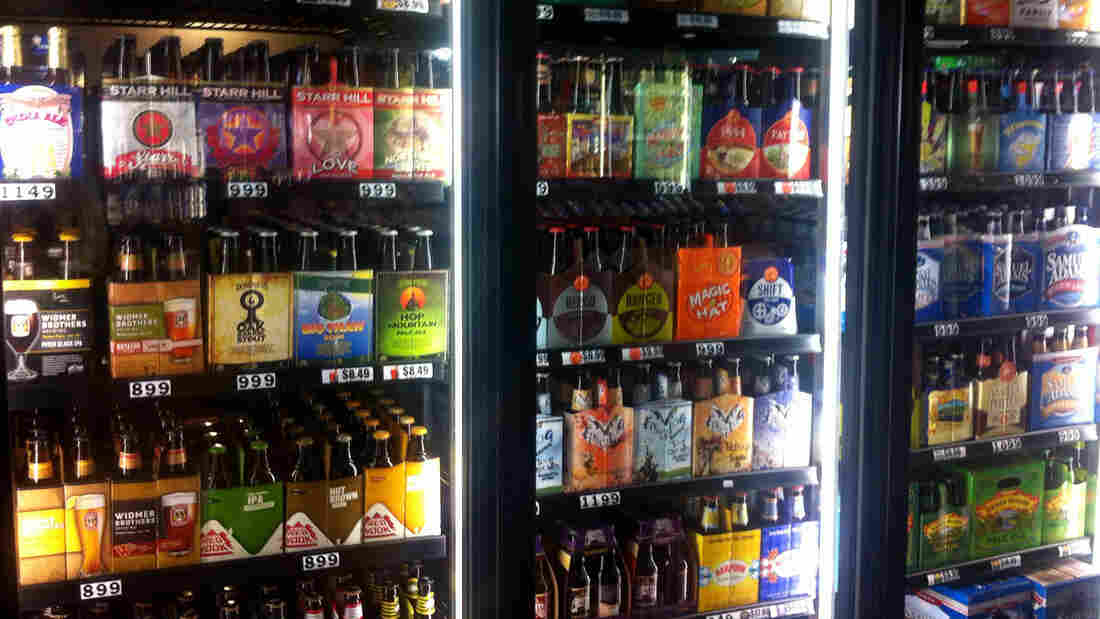 Craft brewers are reaching markets far from their home breweries. In a Washington, D.C., store, beers from California, Colorado, Louisiana, Vermont, and elsewhere are for sale. Bill Chappell/NPR hide caption 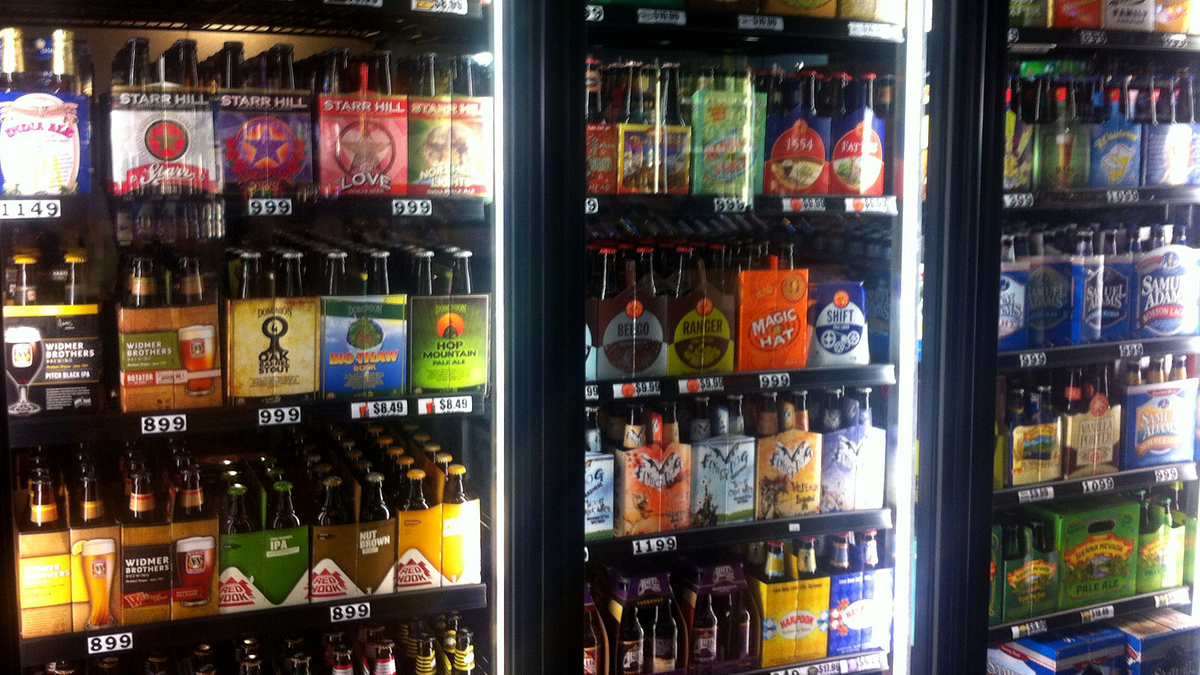 Craft brewers are reaching markets far from their home breweries. In a Washington, D.C., store, beers from California, Colorado, Louisiana, Vermont, and elsewhere are for sale.

It's a good time to be a craft brewer, as Americans are thirsty for full-flavored and local beers. But when small breweries grow, they can also risk losing some of the "craftiness" their fans love. And when they expand, many brewers have to rewrite their recipes — starting with the water.

As we've reported before, there are now about 2,000 breweries in ­the United States — the most ­­­since the late 1800s. And while most craft brewers are tiny operations that sell beer in just a few towns, others are expanding beyond their home states — selling and producing beer far from where they started.

For instance, brewers New Belgium and Oskar Blues are expanding from Colorado into North Carolina. California's Sierra Nevada is doing the same. And while that means Southerners could soon get fresher beers from those brands, it will also likely force the companies to adjust their recipes and even chemically "tweak" the water at their new breweries.

Water is an essential part of beer. But its flavor is only part of the equation. Water also supports yeast, which then eats sugar and turns it into alcohol. Those are two reasons why a town's water supply has long determined what the local beer tastes like.

"People have always thought about the water, because if you went back 100 years ago, when maybe you couldn't do anything about the water — people put breweries where there were great water supplies," Brooklyn Brewery brewmaster Garrett Oliver says. "The flavor of the beer would often be based upon the local water. And they would position the brewery in the right place to take advantage of that."

Oliver tells The Salt that these days, "everything's been cleaned up so much — in wine, in beer, in food. And a lot of what is going on in craft brewing, in natural winemaking, in food movements, is bringing flavors of real stuff back. And also, it's giving things back a character of terroir." (That's the French word for the flavor something gains when it's nurtured by a certain plot of land.)

For instance, consider the famed "Burton snatch" — a term for the sulfurous quality of certain beers, especially those made in Burton-on-Trent, England. As Oliver wrote in his Oxford Companion to Beer, "high levels of sulfate in Burton waters (up to 800 ppm) bring a hard dry mineral edge... and this makes the water ideal for the production of pale ales."

Its unique water turned Burton into a brewing boomtown back in the 19th century, building such a solid reputation that just a few years ago, it was called "the world's most important beer town."

"What could be more terroir than a particular aroma that comes from the fact that their water has come down through these strata of limestone?" Oliver asks.

Looking For A Pure Source

So what happens when a brewery is perfectly happy with its water — but decides to make the same beer across the country? To answer that question, I asked some brewers.

"We're lucky here in Chico [California] to have a really great and pure source of water," says Bill Manley, Sierra Nevada's product development manager. "We do very little to adulterate the chemistry prior to brewing (deoxygenation and filtration)."

Manley says that for some of its beer styles, Sierra Nevada hardens the water to enhance the hops' flavor. And he adds that the company's new brewery in North Carolina is "also blessed with naturally great brewing water."

Sierra's goal with the new brewery will be "to match the finished flavor profile of every beer so that it is identical to beer brewed in Chico," Manley says.

Matching flavors can be a long and painstaking process, even when you use the same water. Michael LaLonde, COO of Deschutes Brewery in Bend, Ore., says his company ran into a flavor challenge when it added a new brewery in 2003.

"We actually took five years to flavor-match our old brewery to this new brewery, before we could actually sell that beer brewed in the new brewery," LaLonde says.

After a batch of beer has been made, brewers then have specially trained staff taste it, to be sure it matches the flavors the brand is going for. LaLonde explains how the process works.

"The way we do it is, we actually have a triangle test," he says. "So, we'll have one beer that's different than the other two. Our sensory panel tastes them all, and if they can identify the different beer, then we know we have an issue. If they can't, then we know that we have a flavor match."

Art And Craft — And Some Science

Not every brewery is lucky enough to sit on top of underground water deposits that are secretly perfect for a certain style of beer. But in the age of filters and chemical manipulation, is the idea of tasting an actual "place" in beer soon to become ancient history?

"No, it's not history," she says. In fact, we've been drinking taste-manipulated beers a long time. "I think that you have to look at New World brewers making Old World styles... when they're trying to make a classic Bohemian pilsner, or a U.S. small brewer is trying to make that German-style bock beer, they're going to mimic the water mineral content from those regions."

And maybe that's why it's called "craft" beer, not "art" beer. Because while there's an art to combining flavors and refining a style, brewers also bring a certain scientific rigor to their beer-making. That's partly due to health concerns, like the need for sanitary conditions. But it's also tied to how water's different qualities affect beer's flavor — minerals, pH, that sort of thing.

At this point, you might be asking yourself why brewers don't just use reverse-osmosis or other methods — so they can start the brewing process with perfectly "neutral" water.

But it's not good to use completely neutral water to make beer, Herz says — the intense filtering "strips everything. And yeast need manganese, zinc, copper and iron to survive and thrive. So a lot of the time, what's in the water is helpful for the yeast — it ensures a healthful fermentation."

Brewers' manipulation of water might surprise some craft beer fans — especially those who feel a swell of local pride when they sip a brew made just down the road. But to brewers and beer fans alike, the only thing better than a great beer is a consistently great beer — no matter what the hops harvest was like last year, or where the water comes from.

As the craft brewing industry continues to expand, more small brewers will have to solve the kinds of problems that come with success.

At Deschutes, Michael LaLonde says the beermaker may eventually build a new brewery in another part of the country — "Just as long as we can brew the beer our way, to our quality standards," he says. And that means making sure the water is just right.