Accessibility links
Survey Says Apple Pie Rules, But There's Lots Of Room For Variety : The Salt Our audience, like the rest of America, loves apple pie — we're traditionalists. But in growing numbers, Americans are branching out to chocolate; key lime and cherry. Pies, before and after the NPR pie contest on Tuesday. Benjamin Morris/NPR hide caption 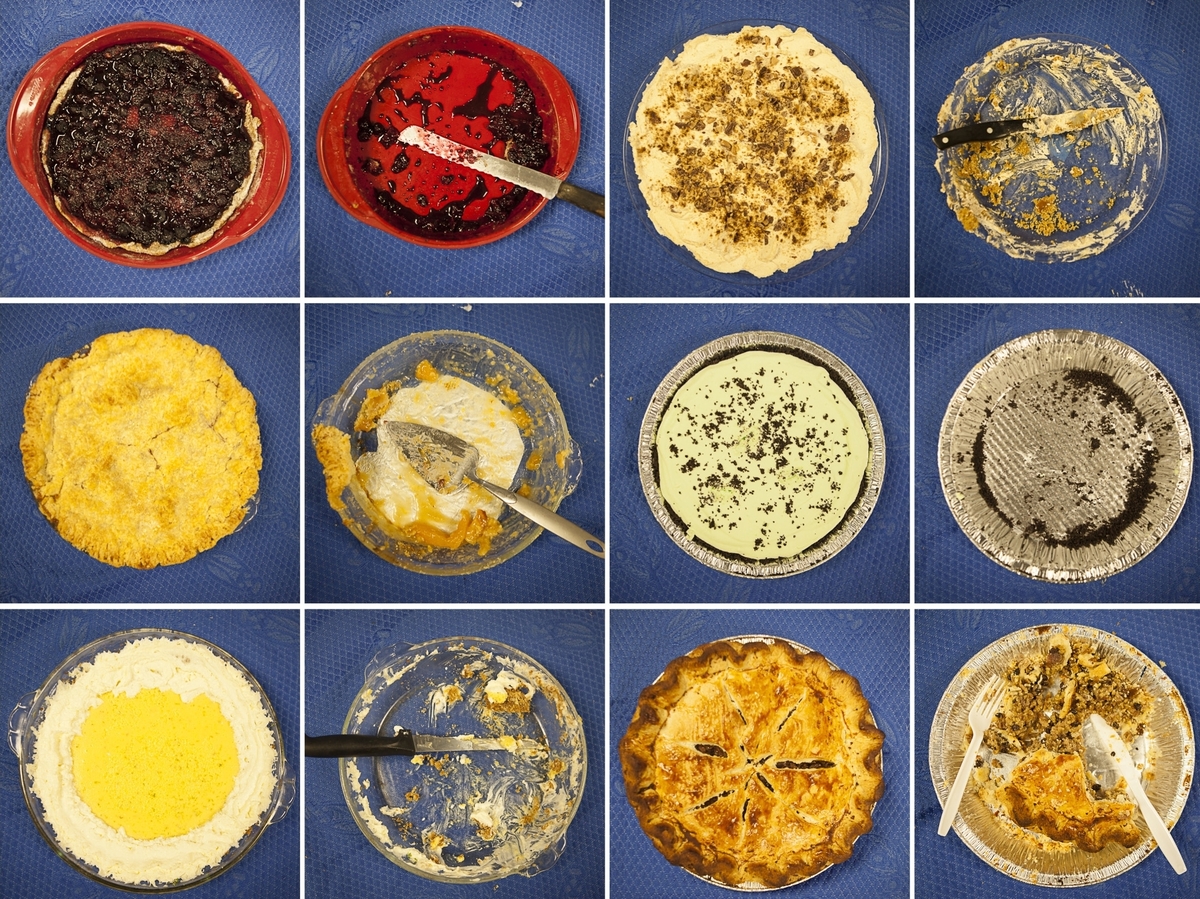 Pies, before and after the NPR pie contest on Tuesday.

We are a nation that puts apple pie above all other pies, and yesterday's survey confirms our audience falls right in line when it comes to the forbidden fruit. But that's not the whole scoop on popular pies.

As we reported yesterday, top American pies bought in the store are apple, pumpkin, cherry, blueberry, and Dutch apple.

In fact, 17 percent of the more than 14,000 people who took our survey picked apple as the top pie, which wasn't exactly a runaway victory. You threw us a few curves, too, like putting strawberry rhubarb up there as a close second to apple at 16 percent.

The next most popular pies were pumpkin (14 percent), cherry (11 percent), and blueberry (8 percent), respectively, according to our survey. But hundreds of you made strong write-in cases for pecan, peach and key lime pies to come out on top.

The top pies have remained the most popular for the last five years, says Jonna Parker, who studies bakery market trends account services at Nielsen's Perishables Group. "People like tradition, but more and more in the last five years, they want a change," she says. A change, like trying chocolate pie, or and blood orange, or regional flavors like sweet potato.

But these "new" flavors are nowhere near the popularity of apple or pumpkin, she says.

Pumpkin has had a couple of weird years due to shortages, as we've reported before, which may have contributed to it's slight drop (1.6 percent) in popularity from 2010 to 2011.

And cherry appears to be making a play for apple's crown. According to Nielsen, cherry pie sales grew by 7.8 percent in 2011 over 2010.

Parker attributes the cherry growth to the fruit's growing reputation as a "super fruit" — full of antioxidants. Blueberry may be getting some credibility here, too, for the same reason. "I think people are making that connection," she says.

Despite its broad appeal, there was nary an apple pie in sight at our in-house pie contest yesterday. Jessica Pavone in our development office won with Bubbe Pavone's Honey Caramel Peach Pie, second place went to The Picture Show's Claire O'Neill, with her Easy Peasy Key Lime Squeezy, and third place went to our own Maria Godoy, senior editor on the science desk, for her Medieval Pork Pie.

Stay tuned for more on pies and culture, pies and science, and pies and history right here and on Morning Edition during Pie Week July 2-7. Don't forget to share your favorite regional pies and insights using the hashtag #pieweek on Twitter.