Accessibility links
Why Protesting Postal Workers Chose A Hunger Strike : The Salt Launching a hunger strike to protest a perceived political injustice is not exactly new, but it is relatively rare in the U.S. The U.S. postal workers unions are trying to turn the heads of members of Congress with the tactic. 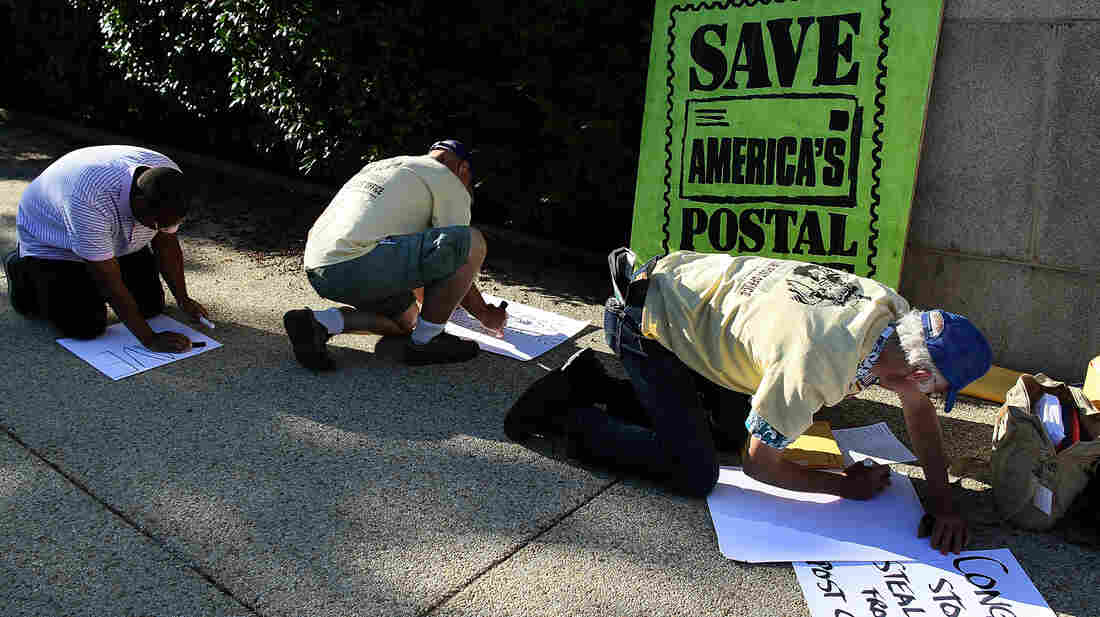 Despite reports that a bit of starvation is just what the doctor ordered, a few of the postal workers expressing their dismay at Congress with a hunger strike are a little nervous.

"I'm not even sure I'm going to get through the four days," Community and Postal Workers United organizer Tom Dodge tells The Salt. "I've never even fasted before."

The dozen postal workers and their allies involved in the strike, which is taking place largely in the halls of Congress, are protesting a series of measures they say would "starve" the beleaguered U.S. Postal Service. They want Congress to drop an annual mandate requiring them to prefund healthcare benefits for future retirees. But it's their method rather than their message that's garnering attention.

Dodge says that the group – a nationwide organization unaffiliated with any of the four major postal unions – decided to employ the strongest political statement it could come up with.

"Our unions just aren't doing enough," he says. "Their whole game is to lobby the Congress members, but they've been doing that for a year and half and it's not gaining much traction." There have been numerous rallies and marches in cities across the country since last September, Dodge points out, but Congress is not budging.

Which it is, if only for the fact that its rareness (in the U.S., at least) makes it a rather extreme tactic. Sure, the strategy is not without precedents — after all, Ghandi succeeded by launching several hunger strikes to protest British rule and Indian caste representation.

But there are contemporary examples, too, though the efficacy of the maneuver in modern times has been mixed. Ongoing intermittent hunger strikes among California prisoners since 2011, for example, has failed to sway state policies.

But will it work in this case?

"I'm influenced and swayed by lots of things," he says. "It's a matter of us influencing each other. I certainly support the positions, opinions and decisions of the postal workers."