Accessibility links
The Making Of Meat-Eating America : The Salt Thanks to American wealth and ingenuity, we're a nation of meat eaters. But that's not the whole story. Over the years, we've made access to land near cities affordable to farmers, and created a cheap market for beef and chicken. 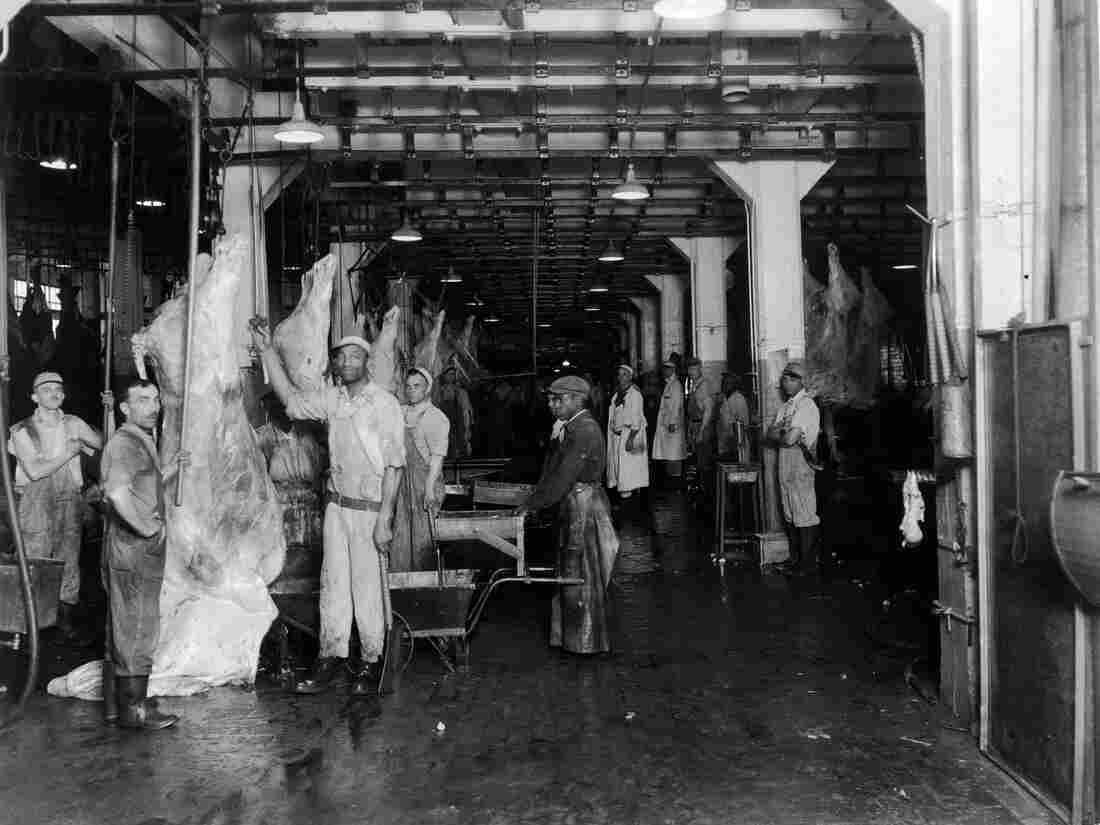 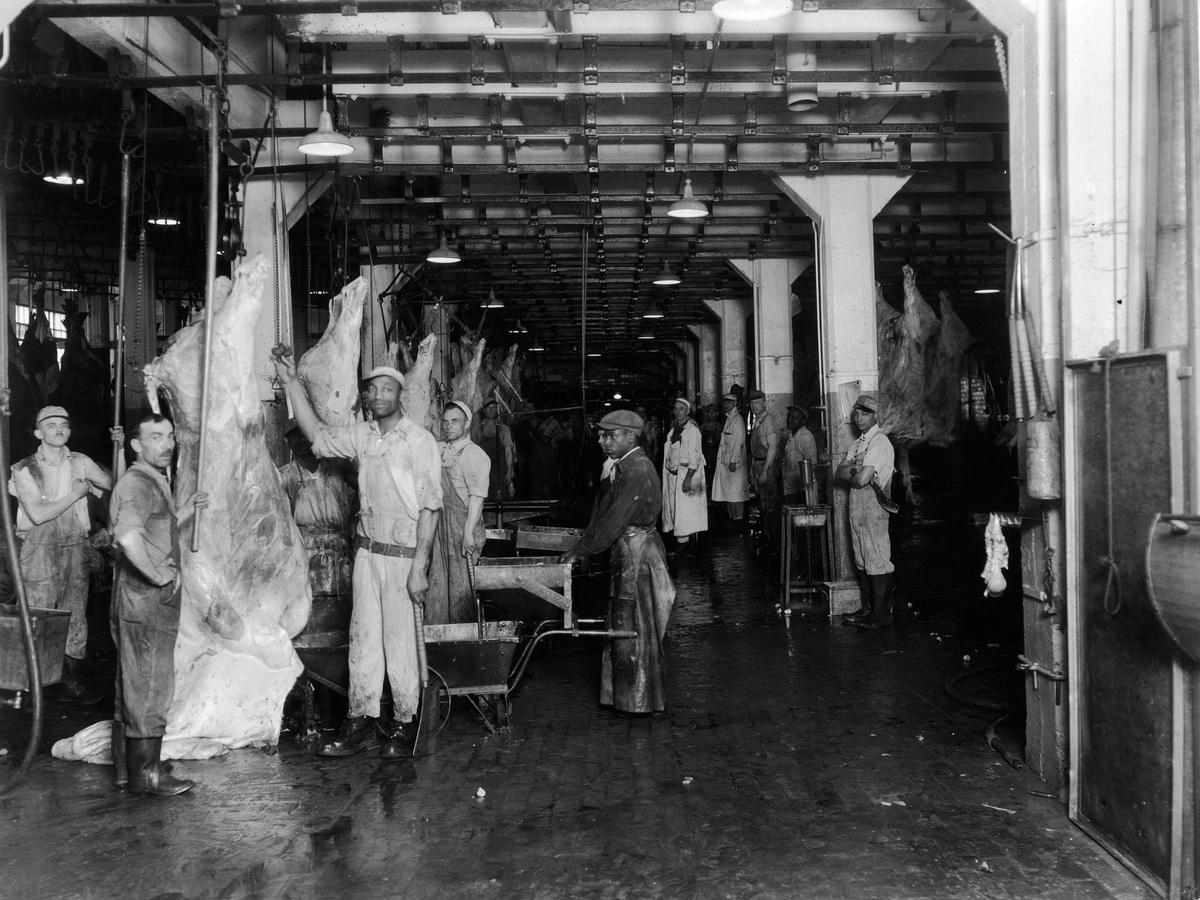 We eat a lot of meat in this country; per person, more than almost anywhere else on Earth. (Here's a helpful map of global meat-eating.)

But why? What makes an American eat ten or twelve times more meat than the average person in Mozambique or Bangladesh?

Reason #1: Dollars and cents. Mark Rosegrant, an economist with the International Food Policy Research Institute, pulls out a graph that shows the typical trajectory of meat consumption, in country after country. "All countries eat more meat when their incomes grow and they have the economic wherewithal to eat more meat," he says. The pattern is so consistent, economists now treat it almost like a law of human behavior. "It seems to be a preference that's built in to people," says Rosegrant.

So, Americans eat meat because they can afford it. But if you take a closer look at the figures, you'll notice that Americans eat more meat than people in other rich countries, too.

Yet this difference may also be due in part to economic factors. Meat is relatively cheap in the U.S., compared to Japan or many countries in Europe.

Jayson Lusk, a professor of economics at Oklahoma State University, got a taste of this reality last year when he lived in Paris. "We literally spent twice as much each month on food, and it wasn't because we were living high on the hog, if you pardon the pun," he says. "It was really because things were just much more expensive, meat included."

Lusk says that simple economics also helps to explain some other trends in American meat consumption that appear, at first, quite puzzling.

For instance, American appetite for beef hit a peak in 1976, and has been plummeting ever since. It's now down by one-third. Instead, the average American is eating twice as much chicken. You can see the shifting trends here (scroll down to the bottom of the page).

Health warnings about the dangers of eating too much red meat played a role in beef's decline. But the main reason for chicken's rise, says Lusk, is simply the fact that it got a lot cheaper. Entrepreneurs like Frank Perdue, in Maryland, and Don Tyson, in Arkansas, turned raising these birds into an industry, and their industrial operations brought down the price.

So that's the economic explanation for America's meat-eating ways. But it's not the full story, says historian Roger Horowitz, at the Hagley Museum and Library in Greenville, Delaware. Horowitz, who is the author of Putting Meat OnThe American Table, says you have to go back a little further to understand why meat is so central to American life, and why this country has led the world in the innovations that made meat affordable.

Almost two centuries ago, he says, meat was one reason why immigrants found America so amazing. "When the Irish come in the 1840s, they write letters back saying 'I eat meat every day,'" Horowitz says. "And they get letters back saying, 'You must be kidding. It can't be true.'"

Back in Europe, says Horowitz, the growing of livestock was often organized and regulated in a way that funneled meat straight to the wealthy or the landed aristocracy. In the new world, though, meat was much easier to find. Grazing lands were close to cities; sometimes right inside cities. Farmers quickly realized that raising animals was a good business. Cities set up markets for them. "And the result is a flourishing of the livestock industry, very early in American history."

As a result, when new technology came along, like railroads and refrigeration, American entrepreneurs were able to jump right in and use it to turn beef into a centralized, national industry.

"Why could they sell chilled beef in New York in the 1880s? Because New Yorkers had been getting beef in their markets and butcher shops for at least a hundred years. So we have this new meat coming in? It's a little cheaper, let's give it a try!" Horowitz says.

That's been the story ever since: Technological innovation, more efficient meat production, and Americans kept saying — "Hey, it's a little cheaper, let's give it a try!"

Now, though, there's a sense that things may be changing.

Each year, for the last four years, Americans have been eating less meat per person.

There's no consensus on why.

Economist Jayson Lusk believes that it's due mostly to the recession and high food prices. Ground beef is 30 percent more expensive today than it was just two years ago. "If something increases in price by 30 percent, we'd certainly expect consumers to buy a whole lot less of it," he says.

Yet there's also some evidence that tastes are actually changing. In a new poll conducted by NPR and Truven Health Analytics, just out this week, 39 percent of the respondents say they're eating less meat than they did three years ago — and the main reason, they say, is a desire to eat heathier food. (Check out The Salt tomorrow for more on the survey.)

In another historical shift, rich Americans no longer eat more meat than poor Americans. They do still eat more expensive meat, just as they always have.

"If you're a wealthy person in New York in the 1880s, you would not put barrelled pork on the table when guests came over. You put a roast on the table, or you'd be humiliated," Horowitz says. "That's not different from people in New York today, if you have guests over, maybe you get your lamb from Niman Ranch. It's grass-fed, humanely slaughtered, and you pay 70 dollars a pound for it."

What hasn't changed at all, he says, is the significance of meat. If it's a special occasion in America, there's meat on the table.