Accessibility links
Unlike Chicken And Pork, Beef Still Begins With Small Family Ranches : The Salt The beef industry is shaped like a bottle: It starts at the bottom with 750,000 small ranches and ends with just four meatpacking plants processing about 82 percent of the beef we eat. 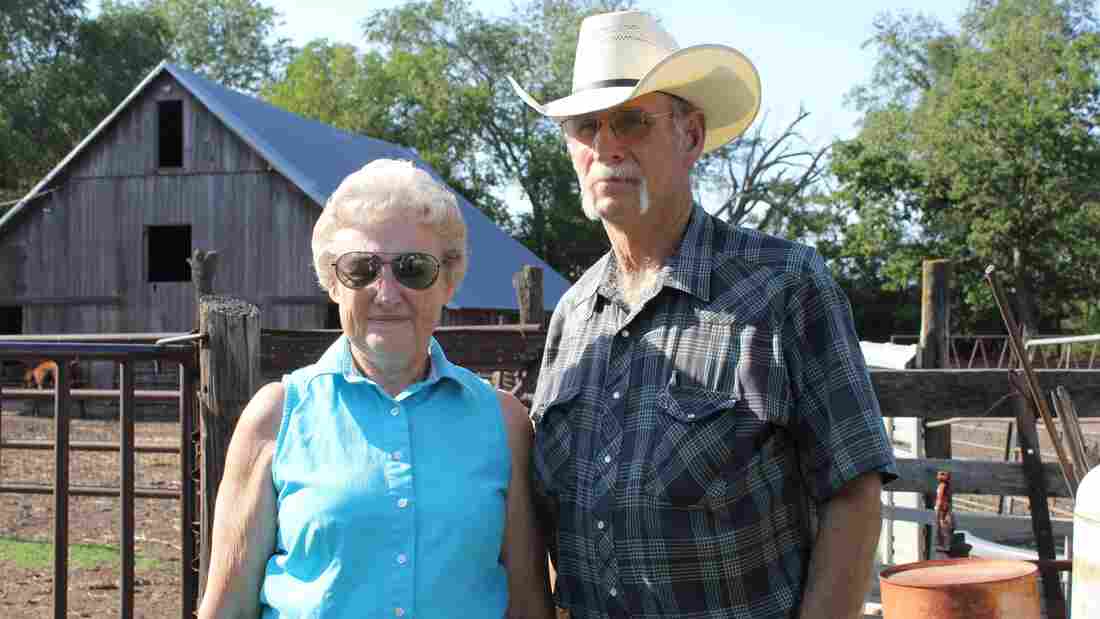 Barbara and Norman Roux stand in front of cattle pens on their farm outside of Moundridge, Kan., where she has raised cattle for nearly 70 years. Peggy Lowe/Harvest Public Media hide caption 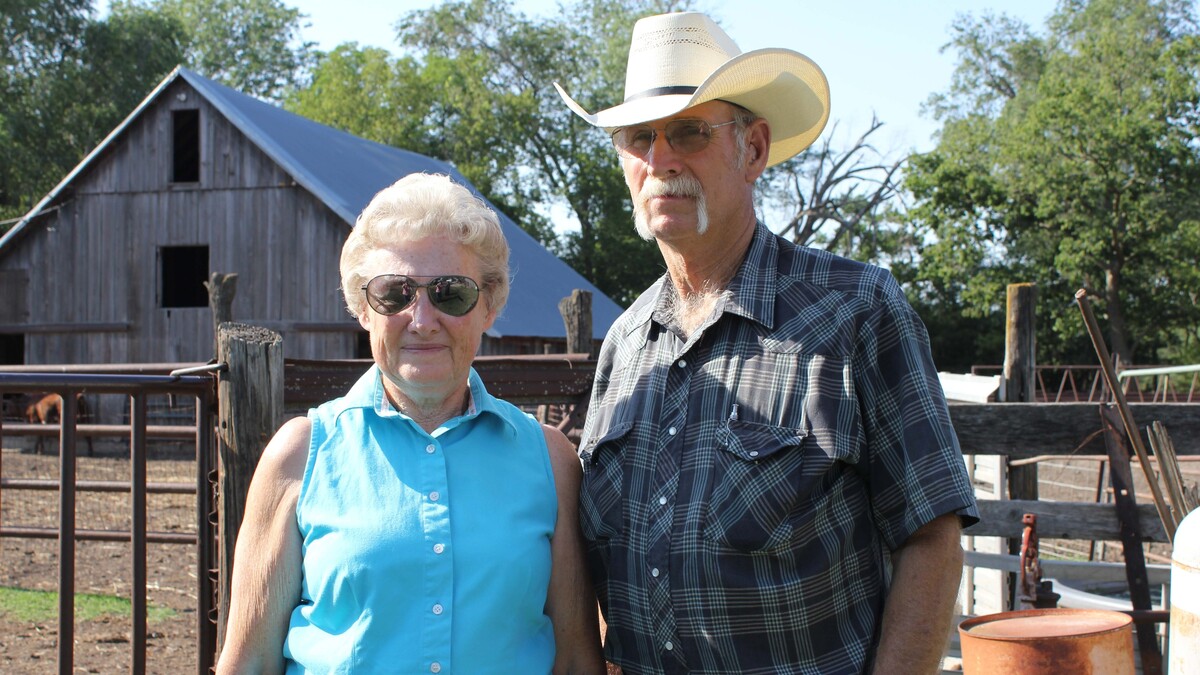 Barbara and Norman Roux stand in front of cattle pens on their farm outside of Moundridge, Kan., where she has raised cattle for nearly 70 years.

In the chicken and pork industries, nearly every aspect of the animals' raising has long been controlled by just a handful of agriculture conglomerates. But the cattle industry is still populated by mom-and-pop operations, at least at the calf-raising level.

Barbara McIntire Roux likes to say that she was born into the cattle business. Roux, 70, is a third-generation Shorthorn rancher in central Kansas, where the prairie pastures are thick with brome and bluestem grasses.

"We have to record about as much information on those calves when they're born as what a human baby has to have collected," Roux says with pride.

Roux is among the 750,000 farmers and ranchers who have what's called a cow-calf operation, and with 50 head of cattle her herd is just a little larger than the average U.S. herd size of 40.

But that small size is true only at one end of the cattle industry. In simple terms, the business is bottle-shaped — large at the bottom and narrowing to the neck, where just four companies control the majority of the market. Roux's end of the business is the pretty, pastoral part of the cattle industry, the place schoolkids come for tours. But it's also the piece of the industry with the least amount of power over the process. 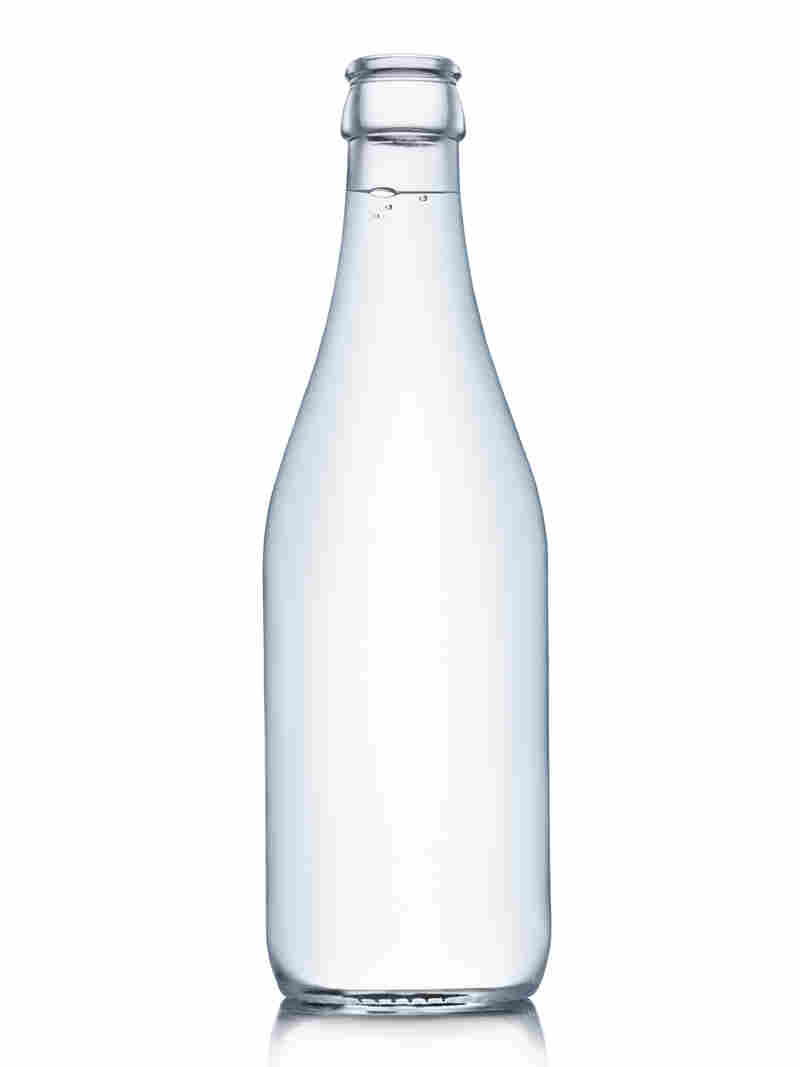 The cattle industry is shaped like a bottle — wider at the bottom with lots of ranchers, smaller at the top with just four meatpacking companies. iStockphoto.com hide caption 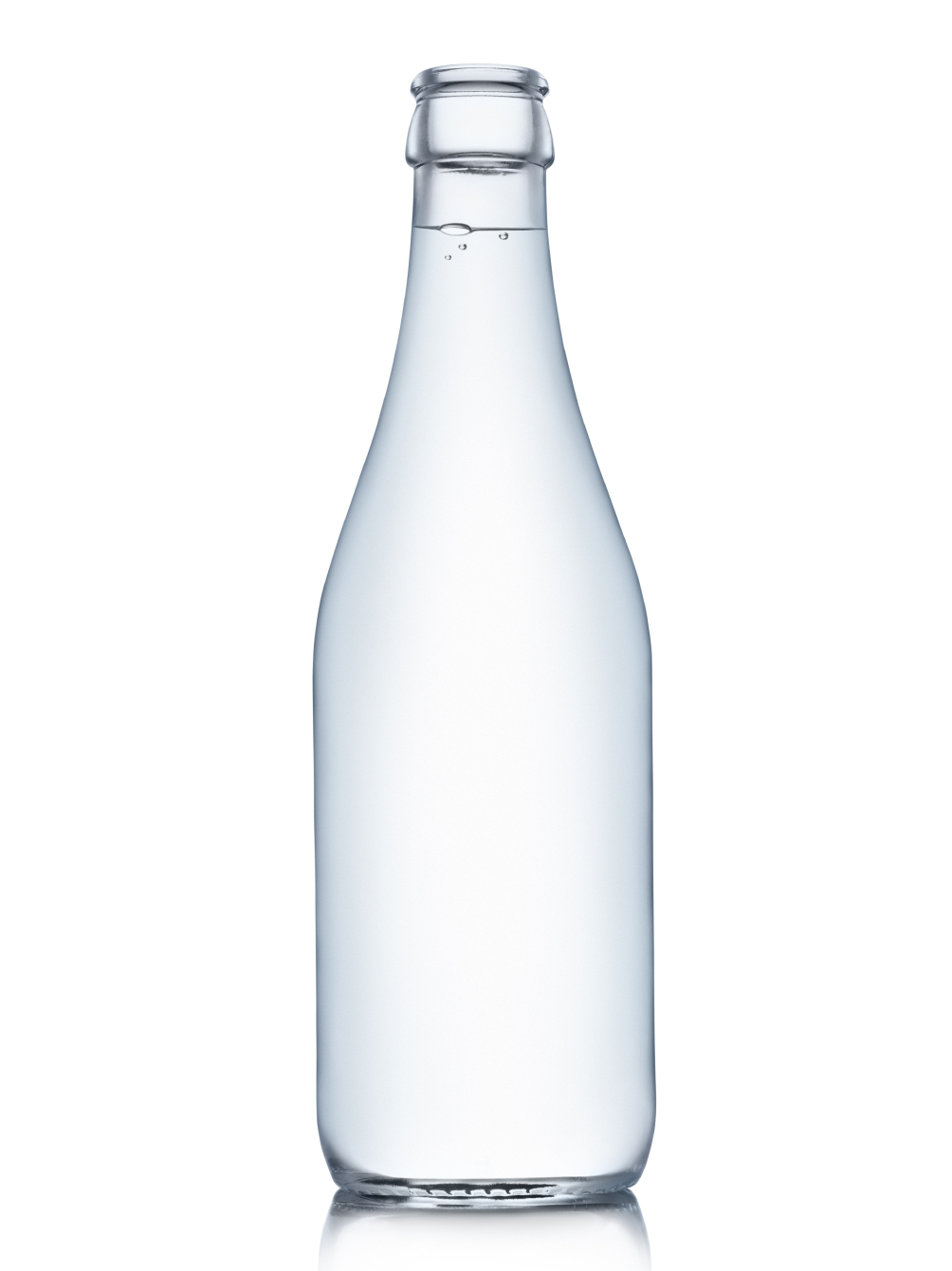 The cattle industry is shaped like a bottle — wider at the bottom with lots of ranchers, smaller at the top with just four meatpacking companies.

As part of Morning Edition's "Meat Week," we looked at the shape of the cattle industry, from farm to feedlot to factory to grocery store. So here's how it works:

On the ranch, the calves are weaned off their mothers at 200 days old, when they weigh up to 600 pounds. Then the animals are sold to what's called a "backgrounder," a larger operation that buys the calves in groups, transitions them from weaning to feeding, and bulks them up.

"That's where these animals are placed on grass or placed in a facility in which they are grown," says Dan Thomson, a veterinarian at Kansas State University. There the cattle pack on up to 800 pounds, receive their immunizations and get prepared for the next step: the feedlot.

Great Bend Feeding Inc. houses about 30,000 cattle on 320 dusty, hot acres in central Kansas, tended by cowboys on horseback. The cattle are kept in pens made with steel and wood fencing and eat three times a day at the six miles of concrete bunks that line the corrals. They are fed grain, alfalfa and protein supplements — a high-calorie diet that will literally fatten them. It's called "finishing."

Some of the feed is processed here on site in a steel feed mill that turns whole corn into something like a corn flake. "The reason we do that is, cattle being somewhat sensitive in the digestive system, we want to make sure it's as efficient as possible," says Andrew Murphy, CEO of Innovative Livestock Services, which owns Great Bend Feeding.

At this stage, the industry begins to get smaller. There are just 2,160 feedlots that have more than 1,000 head of cattle, according to the U.S. Department of Agriculture. The top 25 feedlots — which will house more than 100,000 animals — control 47 percent of the market.

"When you have a bottle-shaped industry like we do, where you have almost 800,000 cow-calf producers down to essentially ... four packing plants, we're just the last first point in that bottleneck," Murphy says. "It makes it very difficult for anyone to break through because [meatpackers] have control of the pounds. It's not a negative comment. It's just a fact of life."

"Once they reach the desired fat, thickness or desired finishing point, that's when the animal goes to slaughter," Thompson says.

The cattle from Great Bend Feeding are sold to meatpacker Tyson Foods Inc. This is the neck of the bottle-shaped industry, and Tyson shares it with Cargill Inc., National Beef Packaging Co., and JBS, the world's largest beef processor. Those four companies produce 82 percent of the beef on the market.

Does this market concentration at the top mean the cattle industry will go the way of the chicken and pork businesses, where the entire process is controlled by just a few companies? That hasn't happened yet, but many ranchers fear it.

In the last 20 years, the number of farmers and ranchers who raise cattle has declined more than 20 percent, according to the USDA. The concentrated markets can constrain farmers and ranchers by limiting options, says Mary Hendrickson, a rural sociology professor at the University of Missouri.

"Often they're the ones who have the least power to negotiate better prices. If beef consumption has a downturn at the marketplace, the packers are often the ones who push changes in prices back through to the farm level," she says. "There are a lot of farmers who are disgusted with this."

So will future generations of the Roux family get to stay in the cattle business? It's hard to say. Meanwhile, those cattle raised in central Kansas and processed by Tyson will end up in your grocery store like all the rest, red meat under plastic.