Accessibility links
Coney: The Hot Dog That Fed Detroit's American Dream : The Salt As the Motor City rose, it dined on a chili-topped dog that helped immigrants make it in the U.S.

Take a hot dog from New York's famed Coney Island, throw in plenty of Greek immigrants and a booming auto industry, add some chili sauce, a steamed bun, chopped onions, mustard and an epic sibling rivalry and you've got the makings of a classic American melting pot story.

That story is told in Coney Detroit, a new book that serves as paean for what's become the quintessential dish of the Motor City. Coneys — a name that designates not just the dogs but the diners that serve them up — dominate the Detroit landscape. Where many other cities offer the chance to navigate by national chain (turn right at the third Starbucks), in Detroit, directions come in Coneys.

"I'm comfortable saying there are about 500 Coneys at any given time," in the Detroit region, says Coney Detroit co-author Joe Grimm, who has done some serious investigative digesting on the project — including visiting 100 Coneys in 100 days. (Proceeds from the book will go to Detroit's Gleaners' Food Bank.)

The history of Detroit Coneys harks back to the early 20th century, when thousands of Greek immigrants were streaming into the city's burgeoning Greektown. But first, they had to stop at New York's Ellis Island — not too far from the famed amusements of Coney Island, where Nathan Handwerker was already peddling his famous hot dogs. 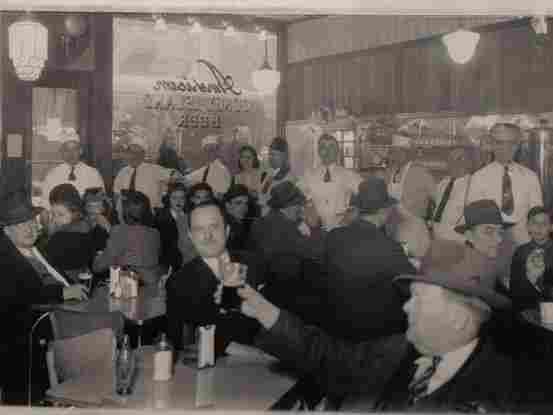 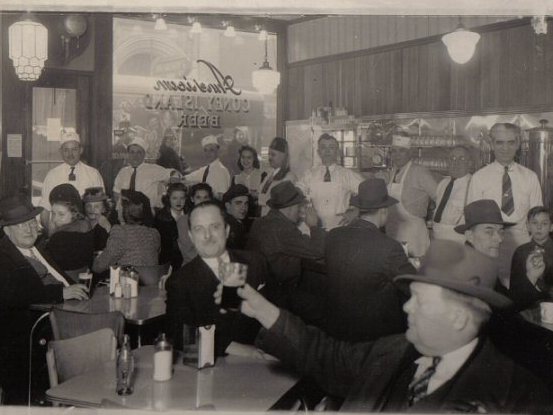 Patrons pack in at American Coney in this undated photo. 1942

No one knows for sure who brought the Coney to Detroit, Grimm says, but everyone knows who made it famous: William "Bill" and Constantine "Gust" Keros. Nine decades ago (the exact date is in dispute), the two Greek brothers opened their hot dog joint, American Coney Island, in the heart of downtown Detroit — at the intersection of Michigan Avenue and Lafayette Boulevard, where it still sits today.

Their timing was perfect: In the 1920s, Detroit was a boomtown "busting at the seams," Grimm says, with workers lured by the solid salaries at the auto factories. (Ford was paying a whopping 5 bucks a day!) So many workers were crammed into the city, there wasn't enough lodging to go around — people rented rooms in 8-hour shifts. In this bustling environment, a quick grab-and-go lunch was essential. And for newly arrived Greek immigrants, hot dogs were a relatively cheap business to break into.

"They were trying to serve American factory workers trying to come in off a crowded street," Grimm says. "And the best way to turn money in the restaurant business is to turn tables over fast."

The business was going gangbusters, but eventually Bill and Gust butted heads, and in 1936, Bill decided to open up his own shop, Lafayette Coney — right next door. Thus was born one of Detroit's most storied rivalries, with each Coney drawing fiercely partisan fans. Even today, Grimm says, there are some Lafayette or American loyalists "who are beyond middle age who will tell you they've never stepped into to the other" shop.

Detroit began its long, slow decline mid-century, but the Coneys survived — thanks to a new generation of Greek immigrants who followed the exodus to the suburbs, setting up dozens of Coneys, including several chains. (One of the most successful chains, Kerby's Koney Island, is run by the extended Keros family.)

Other Michigan cities have also embraced Coneys — in Flint, for example, the hot dogs come topped with a loose meat topping. But it is Detroit, one might argue, where Coneys have reached their apotheosis.

Today transplanted Detroiters can order kits to make their own Coneys at home. (My neighbor in the D.C. suburbs, a Michigan native, likes to keep frozen chili from the National Coney Island chain on hand at all times.)

Coneys, it would seem, have become an essential ingredient in Detroit's identity. "People who think it's just a messy hot dog," Grimm says, "are kind of missing the point."