Accessibility links
Chess Pie's Past And Present : The Salt As part of Pie Week on Morning Edition, Senior National Correspondent Linda Wertheimer shares her chess pie recipe and insights into its origin. It's a Southern pie with Oklahoma roots to her, but its history goes back much, much further.

Chess Pie's Past And Present

Chess Pie's Past And Present 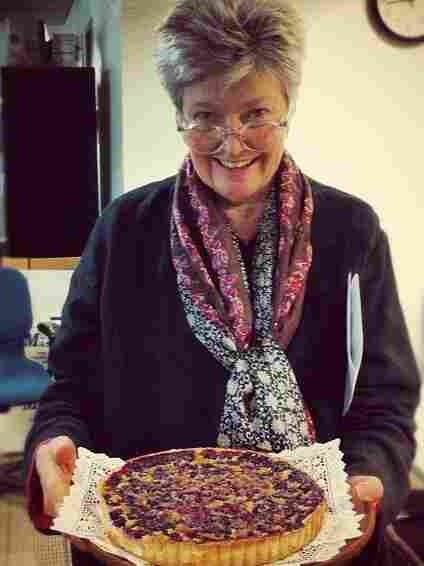 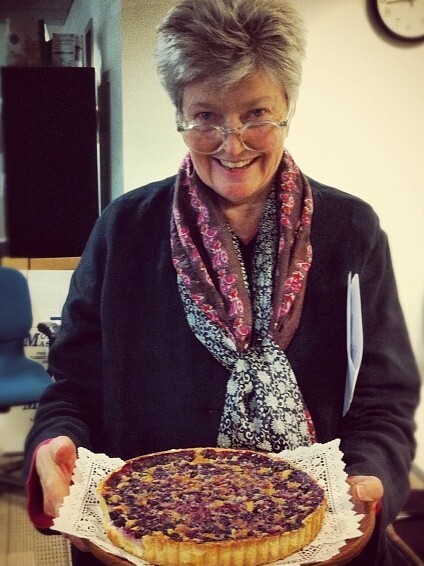 Linda Wertheimer shows off her chess pie with blueberries at the NPR headquarters pie contest.

To me, chess pie is an Oklahoma pie with definite Southern accents. For NPR's recent pie contest, I started with my mother's family recipe for Lemon Chess Pie — with a variation inspired by my Aunt Jane.

Since the pie is so sweet, Jane liked to put some sliced rhubarb on the bottom of the pie crust, then pour the chess filling over it. I added blueberries for tartness instead. This pie, therefore, comes from Grandmother Willie in Loco, Okla., via Woodford, Okla. (Aunt Jane), and Washington, D.C. (me).

But of course chess pie goes back much earlier than my Grandmother Willie. According to food historian Lynn Olver's foodtimeline.org, one theory is that the word "chess" is likely a corruption of the word for cheese. The eggs-sugar-butter combo makes a custardlike filling not unlike British cheesecakes popular in American Colonial times.

So it's not surprising that there's a completely recognizable version of the recipe in Hanna Glasse's The Art of Cookery Made Plain and Easy from the 1747 (Note the original spellings):

"To make Lemon Cheesecakes: Take the Peel of two large Leons, boil it very tender, then pound it well in a Mortar, with a quarter of a Pound or more of Laf-sugar, the Yolks of six Eggs, and a half a Pound of fresh Butter; pound a mix all well together, lay a Puff-paste in your Patty-pans, and fil them half full, and bake them. Orange Cheesecakes are don the same Way, only you boil the Peel in tow or three Waters, to take out the Bitterness."

(Don't worry, my recipe's not that complicated.)

In Classic Home Desserts by Richard Sax, he confirms the chess pie's Southern roots. He calls it a "pantry pie" because it's made of everyday ingredients. Leafing through his pie recipes I found lots of chess's cousins — pecan pie, of course; the maple sugar pies of New England; as well as vinegar pie, buttermilk pie and others.

Bill Neal's Southern Cooking is another personal favorite cookbook. In it, Neal notes that in Tennessee, six or seven chess pies, baked and cooled, "are stacked on each other and sliced as a cake." If that were not enough to set all the fillings in your head ringing, he recommends that a single chess pie be served with sweetened whipped cream or perhaps a sweet sauce made with half a dozen fresh peaches.

There's a very refined chess pie in Lee Bailey's Country Desserts, a book I've used for 25 years. His recipe is also handed down from a grandmother.

I found chess pies in a number of my spiral-bound community cookbooks. Some recipes cream the butter and sugar; others use only egg yolks. Chess comes in white sugar and brown sugar versions, with cornmeal or flour or both; plainly, it's a pie that easily adjusts to what's on hand. It's also adjusted to modern equipment, like the food processor. The most common version is Lemon Chess; maybe the most up-to-date relative would be Lazy Mary's Lemon Tart.

You can make my Chess Pie with all sorts of variations ... I've used orange juice and zest instead of lemon; with the orange flavored filling I've put chocolate chips on the bottom. Dried berries, like cranberries, cherries or blueberries, are also good. Pears peeled and sliced to fan out in the tart pan also work. If you just use a little bit of fruit you get something that resembles a clafoutis. Lots of fruit? You get a definite fruit pie. It's a very easy pie to make — and since I use the processor for crust and filling, it's very fast as well.

I bake this pie in a 10-inch tart pan with a removable bottom; it also works in a deeper 9-inch pie pan.

Pie Crust: Use your favorite recipe, try the CIA's, buy a crust, or try this one:

Put flour, salt and sugar into food processor and pulse to mix.

Add little butter cubes and pulse 8-10 times or until butter bits are quite small.

Sprinkle a tablespoon of ice water over the mixture and pulse.

Add more spoonfuls of water and pulse until the mixture begins to clump.

Dump it out of the machine and gather it together in a disc about an inch thick.

Wrap and refrigerate the pie dough for at least 45 minutes before rolling it out.

The Chess Pie filling: Make this in the processor as well.

Zest from a large lemon

Juice from that lemon (you'll need 1/4 cup liquid, add water or milk if you need to)

Put all ingredients into the processor and run it until the filling is well-mixed.

Scatter blueberries over the bottom of the uncooked pie crust — you want a single layer, probably less than a pint.

Pour the filling over the berries, being careful not to overfill the crust.

Bake at 350 degrees Fahrenheit until it sets — a little jiggle in the middle is fine. It takes maybe 40 minutes; don't let it get too brown.