Accessibility links
An Eggplant Of A Different Color Can Be Just As Sweet : The Salt Scarlet eggplants are the wilder cousins of the ubiquitous purple oblong eggplants found everywhere, and they're starting to show up in more places in the U.S. A D.C. chef shows us how we can use their bright orange color to its fullest effect.

An Eggplant Of A Different Color Can Be Just As Sweet

An Eggplant Of A Different Color Can Be Just As Sweet 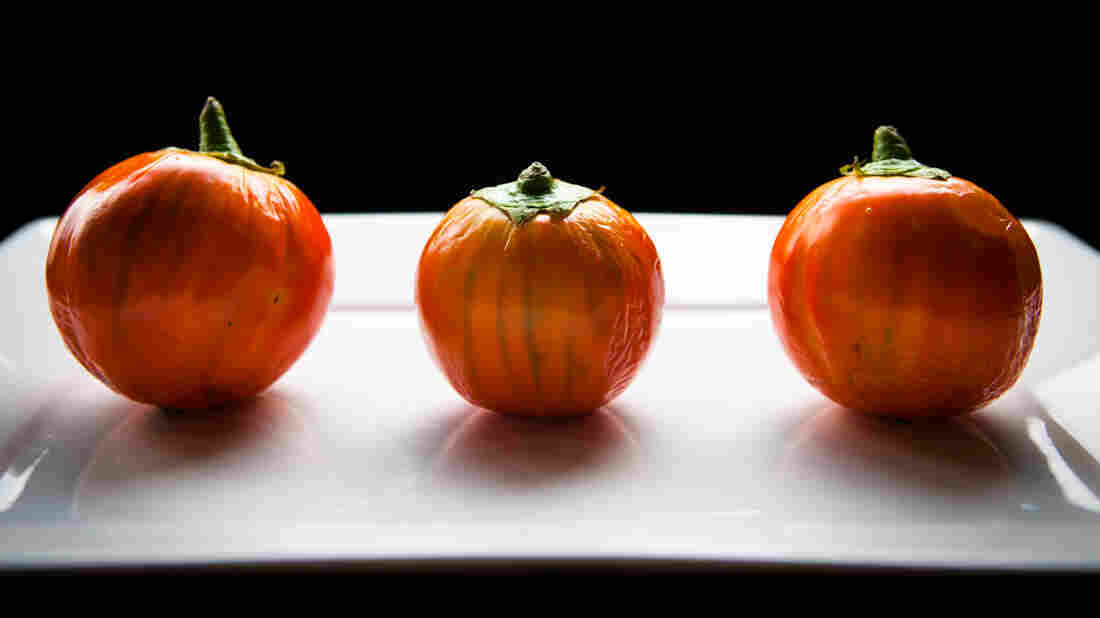 The Turkish eggplant (aka scarlet eggplant, or Ethiopian eggplant, depending on who you ask) has been in the spotlight at my house this week. When a friend brought them from a nearby farmers market, I mistook them for persimmons — until I sliced one open.

So what's inside? Lots of seeds. And, the more vibrant the orange color, the riper the plant, the more mature the seeds. So if you want to cook with them, it's best to buy them and eat them while still mostly green. They won't be as bitter.

The scarlet eggplant tastes similar to the traditional purple eggplant, so I wondered - are these close relatives? And how did they get here?

Turns out the purple eggplant (Solanum melongena) originated in Asia, whereas the scarlet eggplant (Solanum aethiopicum) comes from Africa. Rachel Meyer of the New York Botanical Garden tells us that in parts of Asia, these orange orbs are considered medicinal and eaten with the belief that they help lower blood sugar.

Plant breeder Stephen King of Texas A & M University says he suspects the scarlet eggplant may be closer to its wild origins than the highly-bred purple eggplant. Telling "wild" characteristics of the scarlet eggplant are the things that big agriculture ventures normally breed out: They have smaller fruit as well as thorny, prickly vines.

One variety, called Gilo, made its way to South America during the slave trade. "Slaves snuck seeds of their favorite foods onto the ships and this is how it got to Brazil," explains Meyer.

West African immigrants have long sought out the eggplants they know from home, and growing them has become a new line of business for some former tobacco farmers, as we reported last summer. These eggplants and many others in a variety of shapes and colors are starting to attract a wider audience by turning up in farmers markets from the East Coast to California. Meyer says their unusual shape and color catches peoples' eyes. "And it baffles everybody!"

So how can you turn this unexpected eggplant into something delectable? We reached out to Sidra Forman, a D.C. chef and urban gardener who's got a great method for using eggplant in summer salads, and yes she's tried the scarlet varietals. Her tips: Don't salt, and you don't need to douse in oil. She created this fabulous dish:

Cutting the ripe Turkish eggplant in wedges shows off the intense color of their orange flesh. This type of eggplant can be used in any recipe that calls for eggplant.

1 large or two small white peaches cut in half top to bottom, pit removed and cut into small wedges 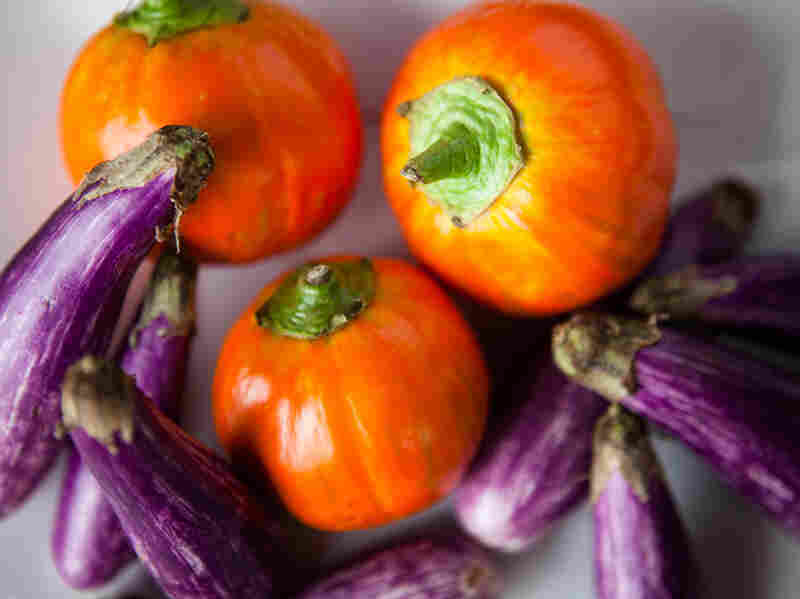 And, if you're just looking for an easy method to prepare eggplant for any summer salad creation, Forman says:
–slice eggplant thinly with a knife or mandolin
–spray lightly using an oil mister filled with grapeseed oil
–season with salt and pepper
–roast on an oiled sheet pan in a 400 degree oven or a well-oiled grill for about 3-5 minutes on each side, until tender)