Accessibility links
Some Athletes Reject High-Tech Sports Fuel In Favor Of Real Food : The Salt Many top athletes are rejecting the processed drinks and gels companies are squarely aiming at them. Instead, they rely on old fashioned water and healthy food to rehydrate and replenish nutrients. 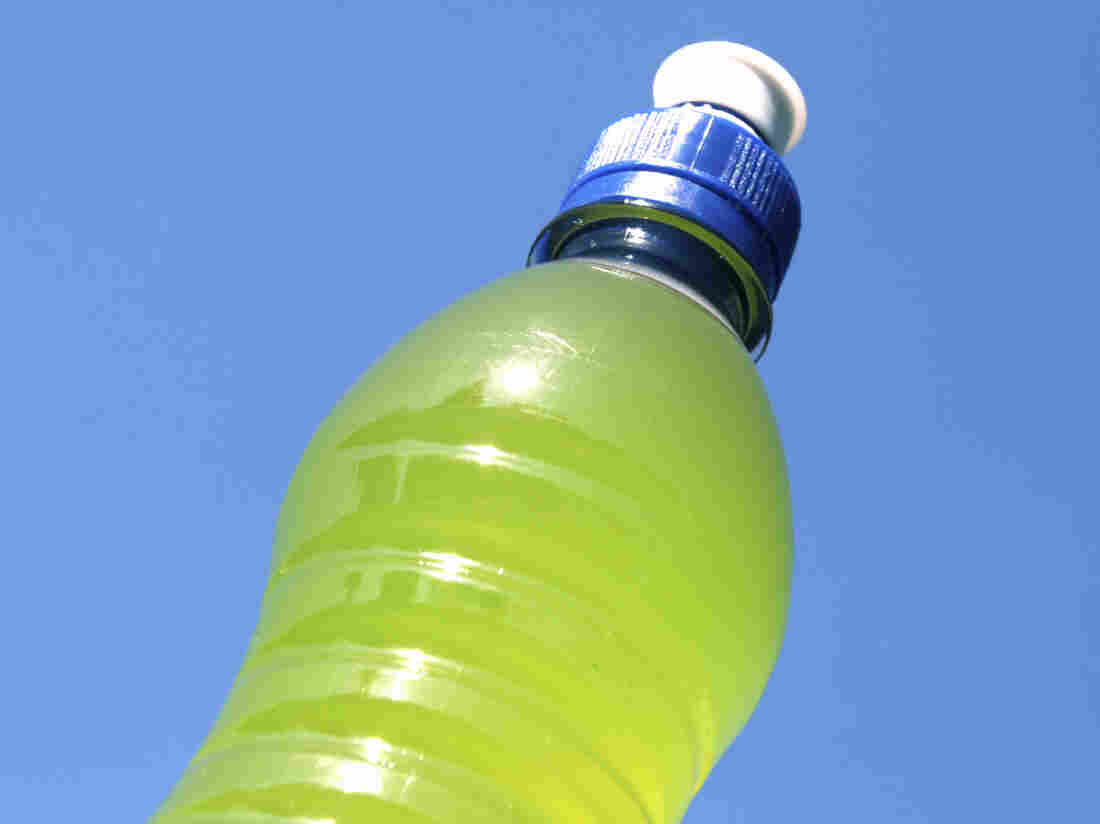 Some athletes are choosing water and real food instead of sports drinks and processed bars and gels. iStockphoto.com hide caption 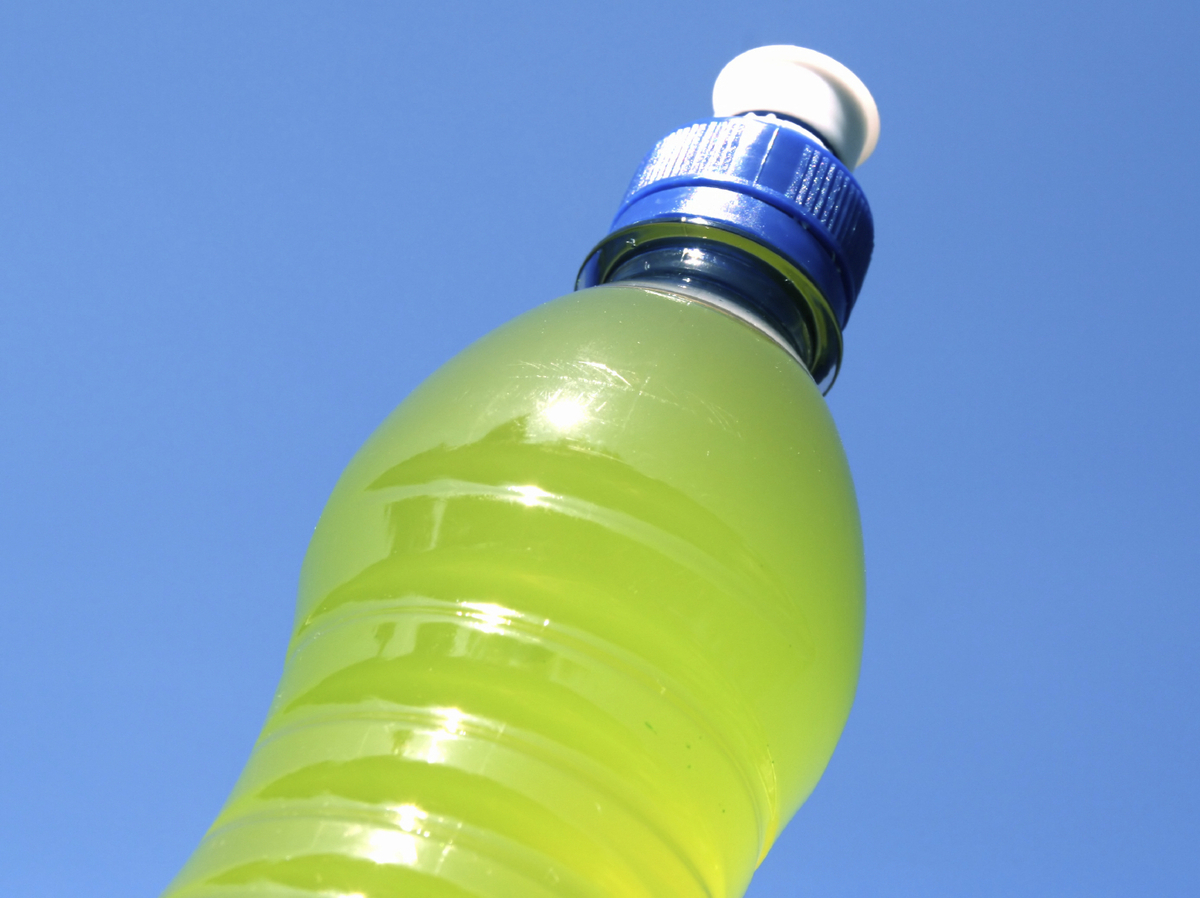 Some athletes are choosing water and real food instead of sports drinks and processed bars and gels.

As the world's greatest athletes gear up for the 2012 Olympic Games in London this month, viewers like us are likely to see a spike in televised ads for sports drinks, nutritional bars, and energy gel — that goop that so many runners and cyclists suck from foil pouches.

Powerade, in fact, is the official sports drink of the 2012 Olympics, and if it's true what these kinds of ads imply, processed sports foods and neon-colored drinks are the stuff that gold medalists are made of.

But sports nutritionists and pro athletes don't all think so. David Katz, physician and nutrition expert at the Yale University School of Medicine, says sports drinks generally aren't much better than sodas. "[Sports drink companies'] marketing is based on the gimmick that somehow this extra load of sugar and calories will turn you into an athlete," he says.

Perhaps no brand has so loudly touted its product as an enhancement to physical prowess as Gatorade. One of its most effective sales pitches asserts that its sweet and colorful drinks can rehydrate a body more efficiently than water. Leslie Bonci, a dietary advisor to several Major League Baseball teams and a consultant for Gatorade, explains, saying that the body can absorb Gatorade more quickly than it can water alone. She adds that the sugar in Gatorade provides needed calories absent in water.

But the electrolytes in Powerade and Gatorade occur naturally in many other foods, like fruits, vegetables, grains, milk and coconut water.

Katz warns that the sugar content of sports drinks is far more likely to cause unwanted side effects than it is to propel you to the finish line of a race.

Like tooth rot, for example, or that stubborn layer of blubber that clings to our waistlines in spite of our most vigorous efforts to dispatch it. After all, makers of sports drinks, bars and gels encourage people to consume their products not just during exercise, but before and after, as well.

For example,the website for GU Energy — a popular brand you may know from discarded foil wrappers plastered to the asphalt — advises sucking down one of its 100-calorie gel packs before a workout, then again every 45 minutes during the workout. For your post-workout meal, there is GU Recovery Brew.

GU Energy did not respond to our inquiries about their products by press time, but sports nutritionists aren't so sure about the suggestion to slurp the gels.

"The sports nutrition industry just tells us to eat, eat, eat," says Stanford University nutrition coach Stacy Sims. "They don't care how big you are or whether you're a man or a woman or if you're trying to lose weight." (Full disclosure, Sims co-founded her own sports nutrition company called Osmo, which makes powdered sports drinks for hydration and recovery, and are purportedly easier on the body than syrupy energy gels.)

Walk onto any school field on weekends, and you'll see kids drinking sports and energy drinks, too, even though pediatricians advise good old fashioned water.

Mountain biking legend Gary Fisher says these "engineered nutrition" products keep many amateur athletes on the tubby side. "I see guys who really put in the miles, and they have a gut that never goes away," Fisher says.

Fisher says he prefers roast beef sandwiches, burritos, nuts, and bananas during bike rides, and afterward, he often eats a large helping of chicken or fish served beside a salad dressed with olive oil.

And Scott Jurek, the record-holding vegan ultra-marathoner featured in the 2009 bestseller Born to Run, enjoys smoothies prior to his 30-mile training runs, scarfs rice balls and hummus wraps en route, and afterward feasts on quinoa, tempe, brown rice, and beans — all vegan recipes included in his new book, Eat and Run.

Jurek says gels, which are easy to pack and carry, may be convenient if no real foods are available. His favorite gel product is by Clif, which also happens to be one of his sponsors.

But Sims at Stanford says unless you're flat out of gas with miles more to go, don't do goo.

"The fact is, every time you take a gel, you're doing the exact opposite of what you want to do," says Sims, who has worked with cycling stars Andy Schleck and Lance Armstrong. She says densely sugared foods dehydrate the body and cause overheating.

But that's supposedly where Gatorade comes in, rehydrating parched athletes and resupplying the body's depleted electrolytes.

How important is hydrating anyway? Can it be reduced to a specific formula? Timothy Noakes, a South African sports nutrition doctor, says dehydration is a simpler condition than sports drink companies have hyped it up to be. He says athletes can generally "listen" to their bodies and drink water when they feel thirsty.

UPDATE: After this article was published, one of GU Energy's lead scientists, Brent Mann, explained to us via email that food in "gel form better facilitates energy delivery to working muscles because it requires very little digestion." He says natural solid foods can cause stomach aches and bloating if eaten during a hard workout.