Accessibility links
Hot Or Not? Potato Board Tries To Un-Dud The Spud : The Salt Potato consumption has been slipping due to renewed concerns among some Americans about eating too many carbohydrates. Now the U.S. Potato Board hopes it can recast the potato as a glamorous, nutritious vegetable. 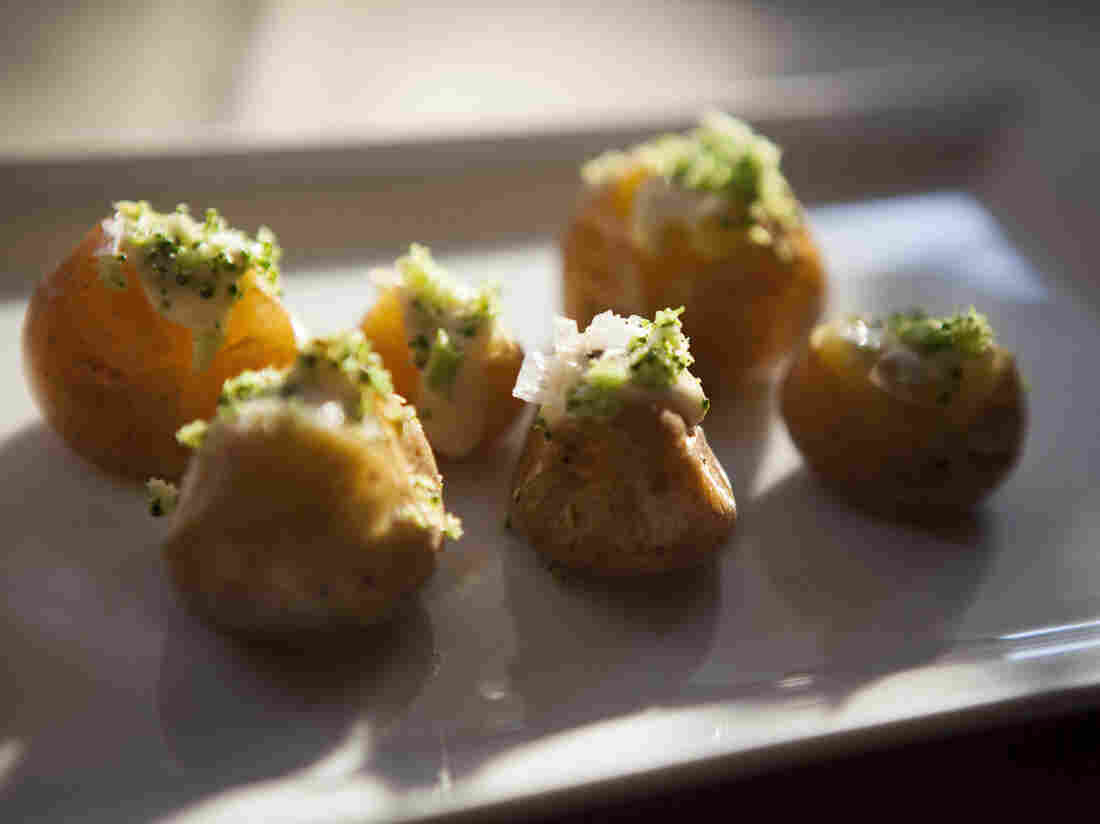 Tiny spuds decked out with cheese fondue sauce and a sprinkling of broccoli shavings at a dinner sponsored by the U.S. Potato Board. Benjamin Morris/NPR hide caption 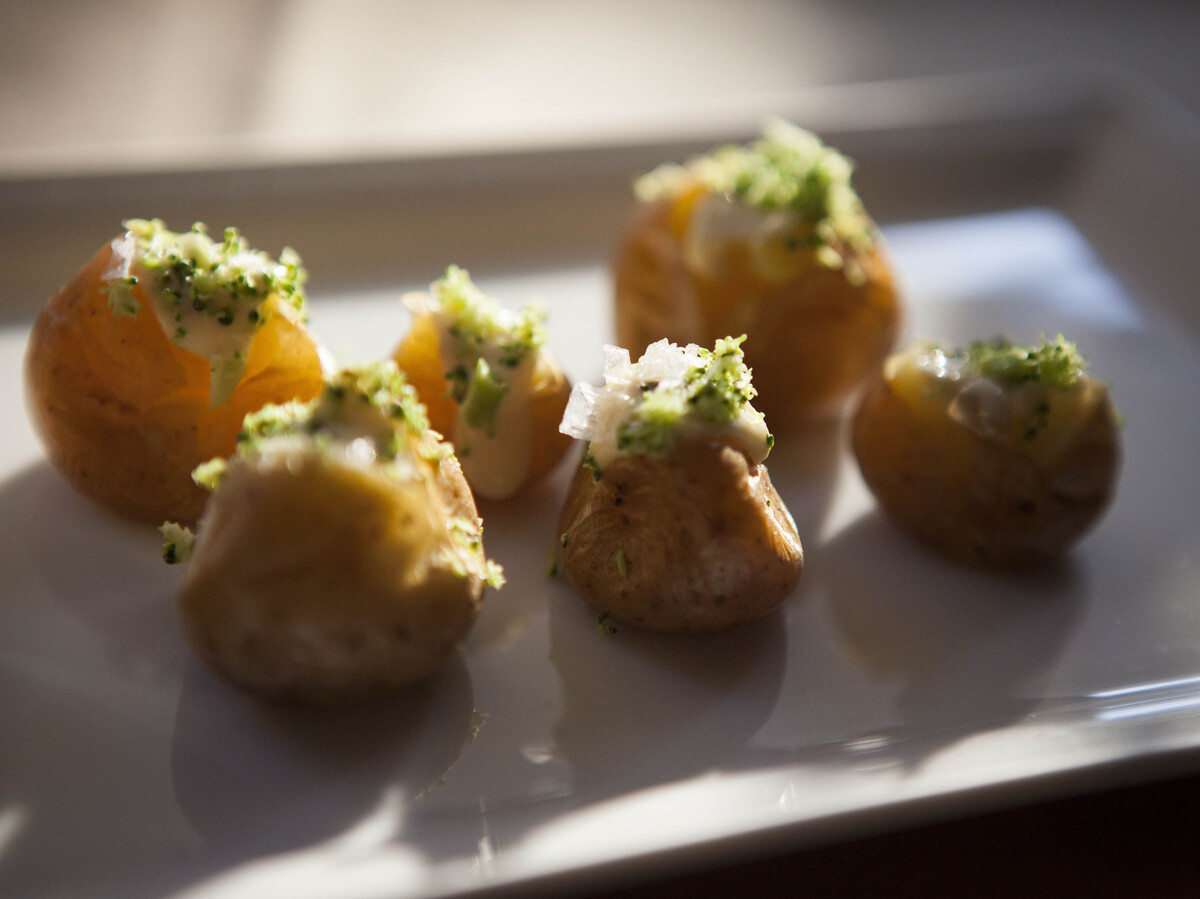 Tiny spuds decked out with cheese fondue sauce and a sprinkling of broccoli shavings at a dinner sponsored by the U.S. Potato Board.

It may not be obvious to the average shopper or diner, but the potato is an embattled vegetable. Yes, the simple spud, so ubiquitous, so unassuming, may be in need of a makeover.

That's at least the view of the U.S. Potato Board, the organization responsible for marketing American potatoes here at home and abroad.

"The potato has been in a rut," Meredith Myers, spokeswoman for the U.S. Potato Board, tells The Salt.

This week, the board gave the spud a star turn with a seven-course dinner in Washington, D.C., at an upscale restaurant in the tony Cleveland Park neighborhood. 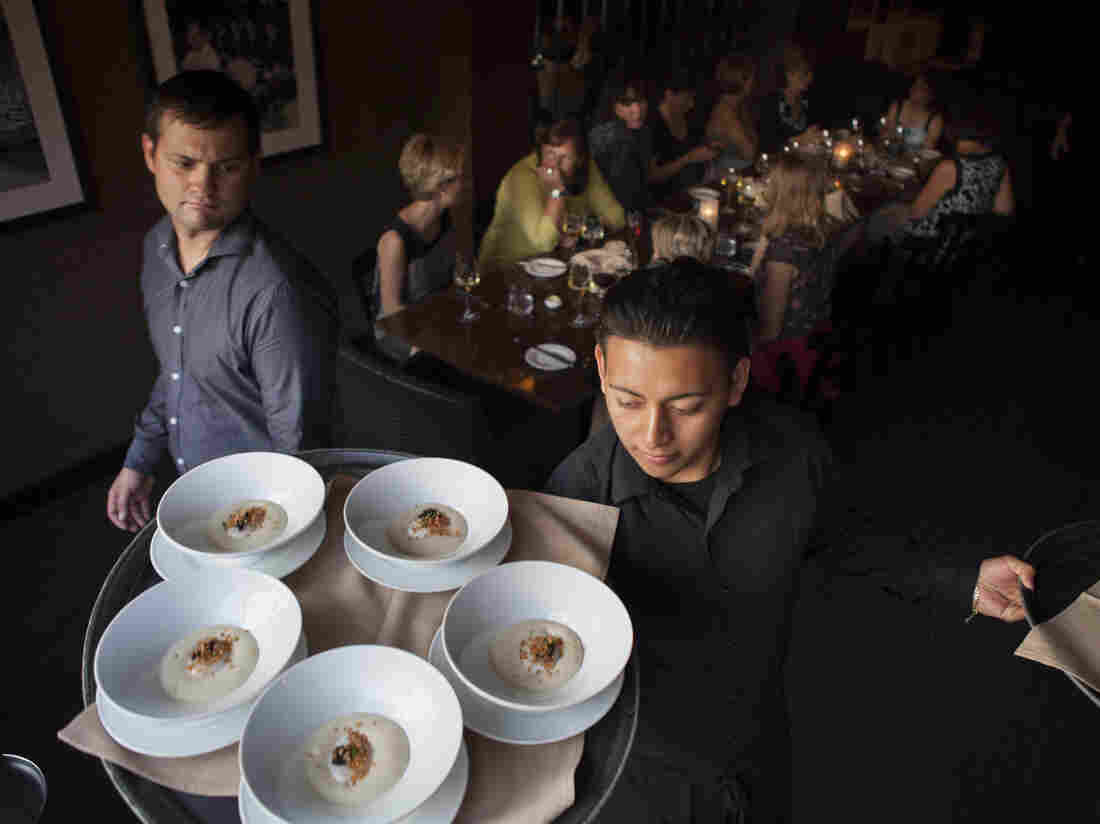 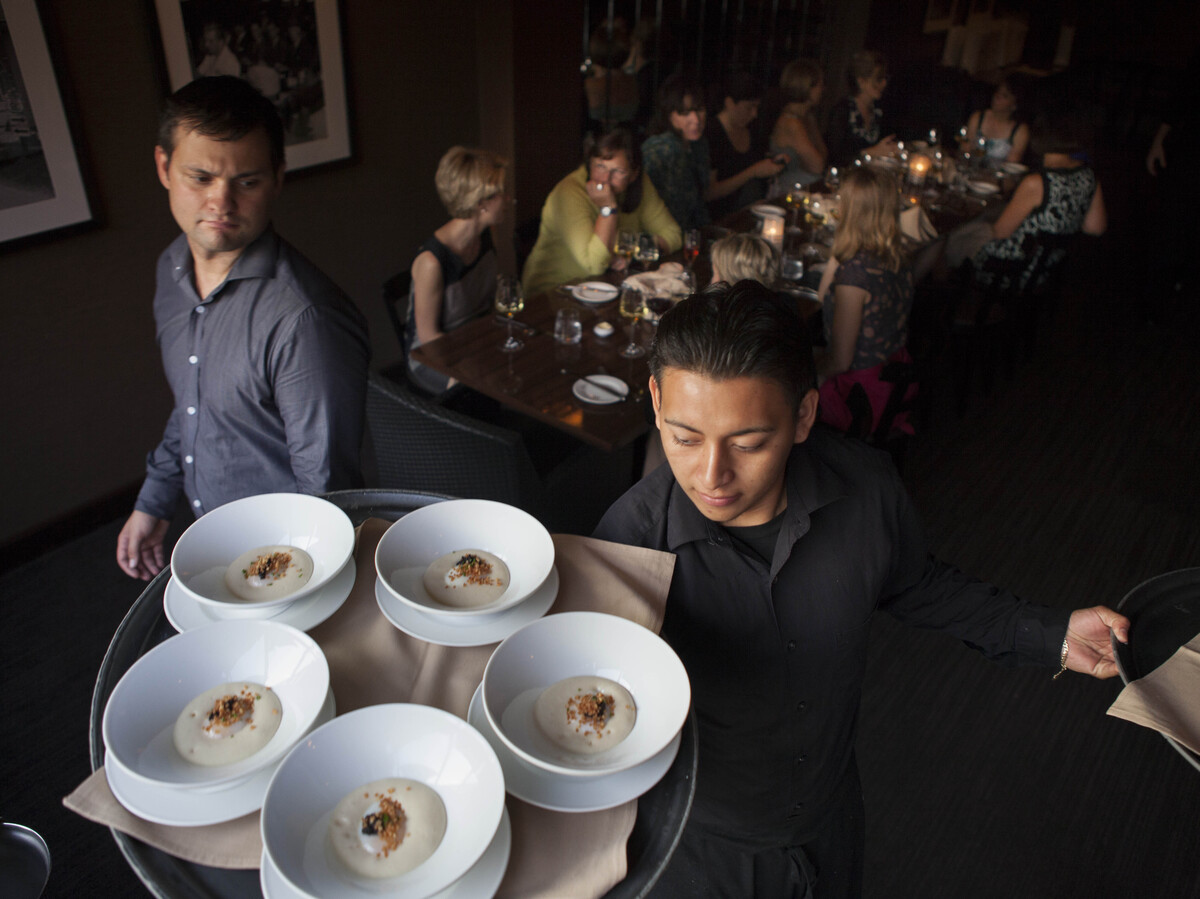 There, for a small group of journalists and potato-friendly dieticians and nutritionists, the board enlisted Chef Nate Garyantes of Ardeo-Bardeo to take potatoes for a glamorous spin, pinching them into bouncy gnocchi, smoking and whipping them into mousse, and crisping them into a confit. As we nibbled these dapper potatoes, the board's nutritionist reminded us that the potato is more than just a vehicle for starch: It also has rich stores of Vitamin C and potassium.

But why all the fuss?

Well, according to the U.S. Department of Agriculture's Economic Research Service, potato consumption has slipped from a high of 145 pounds per person in 1996 to 118 pounds per person in 2011. There were a few recoveries along the way, but the most recent decline set in around 2005, which the potato board attributes to the rise of the Atkins diet and the potato's sudden vilification as a carbohydrate monster with high scores on the glycemic index.

"The low-carb trend really hurt the potato," says Myers. "We saw a dip in attitudes towards the potato and consumption was already going down."

The produce aisle has also gotten a lot more crowded, she says. (Stay tuned for a story from Dan Charles on how the industry is developing new varieties to appeal to shoppers who may be bored with russets and Yukon golds.)

Though the Atkins plan has lost some credibility, the debate around which carbs and how many carbs are good for us is very much still kicking. Take the study, published in June in the Journal of the American Medical Association, which found that dieters burned significantly more calories while on a low-carb diet than on a low-fat diet.

And last year, researchers at the Harvard School of Public Health fingered potatoes and potato chips as the food items most responsible for weight gain, more so than red meat or sugary drinks. That study appeared in the New England Journal of Medicine.

Then last fall, USDA entertained the idea of limiting potato consumption among schoolchildren to two servings a week. But politicians and farmers in potato-growing states raised such a fuss that the change was scrapped.

But Katherine Beals, a professor of nutrition at the University of Utah and a paid consultant to the U.S. Potato Board, says all this research suggesting that the low glycemic (or low-carb) diet is a healthful way to eat is inconsistent. "I'm very opposed to the glycemic index," says Beals. "It's impractical and the measure itself is highly variable."

Still, Myers admits that perhaps some people could stand to eat a few less potatoes if they're struggling with their weight. Then she joined the familiar chorus of spokespeople for so many food industries (soft drinks, red meat, to name a few) that have come under attack for fueling the obesity epidemic: "They can be enjoyed in moderation," she said.