Accessibility links
Romney And Jimmy John's Sandwiches, Never Far Apart : The Salt The success story of sandwich king "Jimmy John" Liautaud is a regular part of GOP presidential candidate Mitt Romney's stump speech. And it's a safe bet that Jimmy John's is being served on the political press bus at lunch. 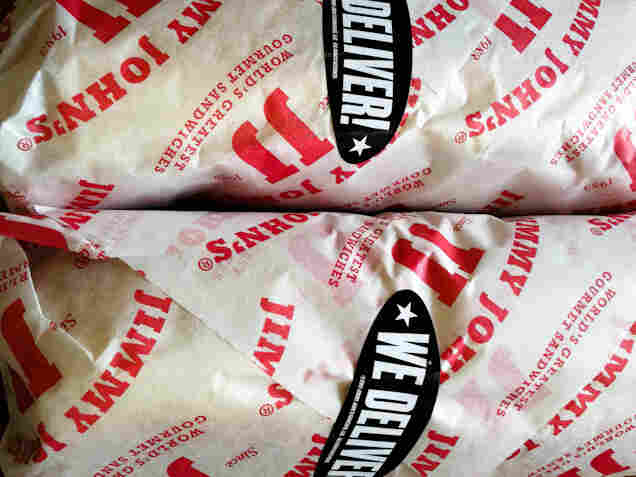 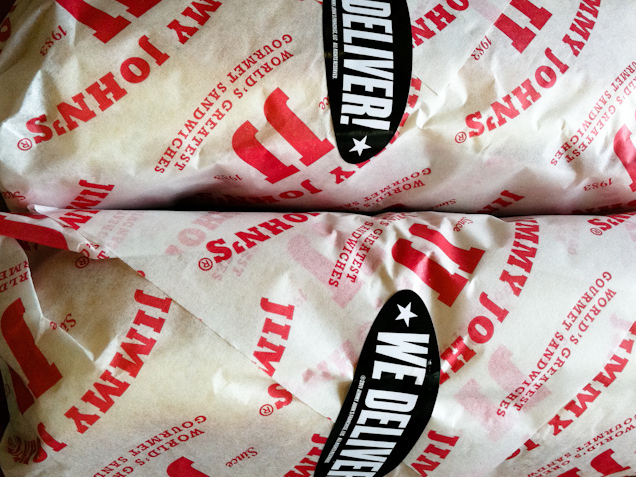 Jimmy John's Gourmet Sandwiches are a big part of Republican presidential candidate Mitt Romney's campaign. The story of the sandwich chain founder's success is now a regular part of the Romney stump speech, and, according to our political correspondent Ari Shapiro, "It's a reliable bet that almost any time the Romney press bus provides lunch, it will be a big box of Jimmy John's subs."

In fact, Romney suggested to college kids in Ohio back in April that they, too, could just borrow money from their folks to start a business, prompting some hazing from liberal blogging sites like Raw Story.

Yesterday, during a campaign stop in Pennsylvania, Romney highlighted the Jimmy John's story again. "And you see, I happen to believe that Jim Liautaud, JimmyJohn, built that business with the help of people around him, his friends, the people who worked there in that enterprise. I do not give government credit for having built that, I give free people credit for having built that business," Romney said to applause.

The Jimmy John's chain now boasts 1,321 franchises around the country. It added some 450 of those since President Obama took office in 2009, according to entrepreneur.com. Still, Liautaud is a solidly Republican campaign donor, according to Opensecrets. org. And, we hear from foodie friends that the Turkey Tom sandwich is pretty darn good.

But even if Jimmy John's has the "world's greatest gourmet sandwiches" and delivery is "freaky fast," as the ad says, would you want to hear about them and eat them every day?

In a tweet from NBC News' Mike O'Brien (@mpoindc) yesterday: "There's no way the people in that audience like Jimmy John's as much as Romney. Very bland sandwiches."

To which Romney press aide Rick Gorka (‏@Rick_Gorka) responded on Twitter: "Jimmy John's makes a great sandwich and it's a favorite of the Romney press bus."

Ari Shapiro was more diplomatic. "I will say that no matter how big a fan of Jimmy John's subs you may be at the beginning, after a few weeks on the Romney press bus, the sight of that box will be enough to make you decide to skip lunch," he tells us.