Accessibility links
High-Tech Shortcut To Greek Yogurt Leaves Purists Fuming : The Salt Greek yogurt sales are booming in the U.S., and some companies are turning to new technology to get in on it. But some Greek yogurt purists who compete with those companies for market share say the products are not the same. 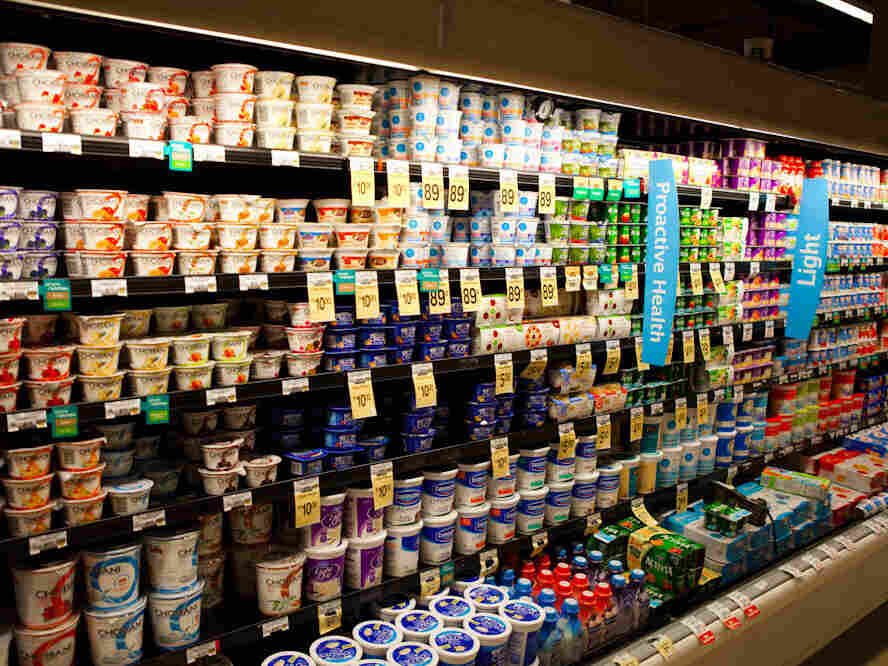 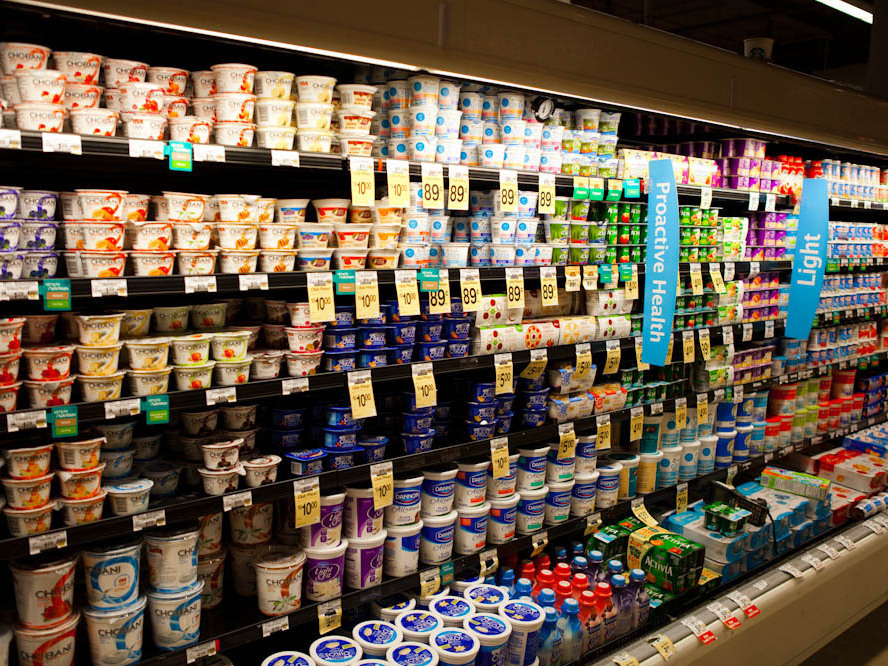 A supermarket's dairy case with shelves of yogurt.

America's food companies are masters of technology. They massage tastes and textures to tickle our palates. They find ways to imitate expensive foods with cheaper ingredients.

And sometimes, that technological genius leads to controversy.

A case in point: Greek yogurt, one of the trendiest foods in the country right now — "the Jeremy Lin of food products," says the Los Angeles Times. Some yogurt companies are climbing onboard the Greek yogurt bandwagon with new ways to achieve that characteristically thick Greek yogurt texture. And traditional makers of Greek yogurt don't like it one bit.

Among the critics is Hamdi Ulukaya, founder of the company Chobani and perhaps the country's No. 1 cheerleader for Greek yogurt.

Ulukaya is Turkish, but Greece and Turkey share a common tradition of yogurt-making, as it turns out. Seven years ago, he founded Chobani. Today, it's America's biggest maker of Greek yogurt.

Ulukaya says the secret of his success is simplicity. "We want to make yogurt the way it was meant to be," he says. His yogurt, he says, is exactly the same as what his mother made by hand back home in Turkey.

Except that now, he's making 1 million pounds of it every day in a factory in upstate New York. 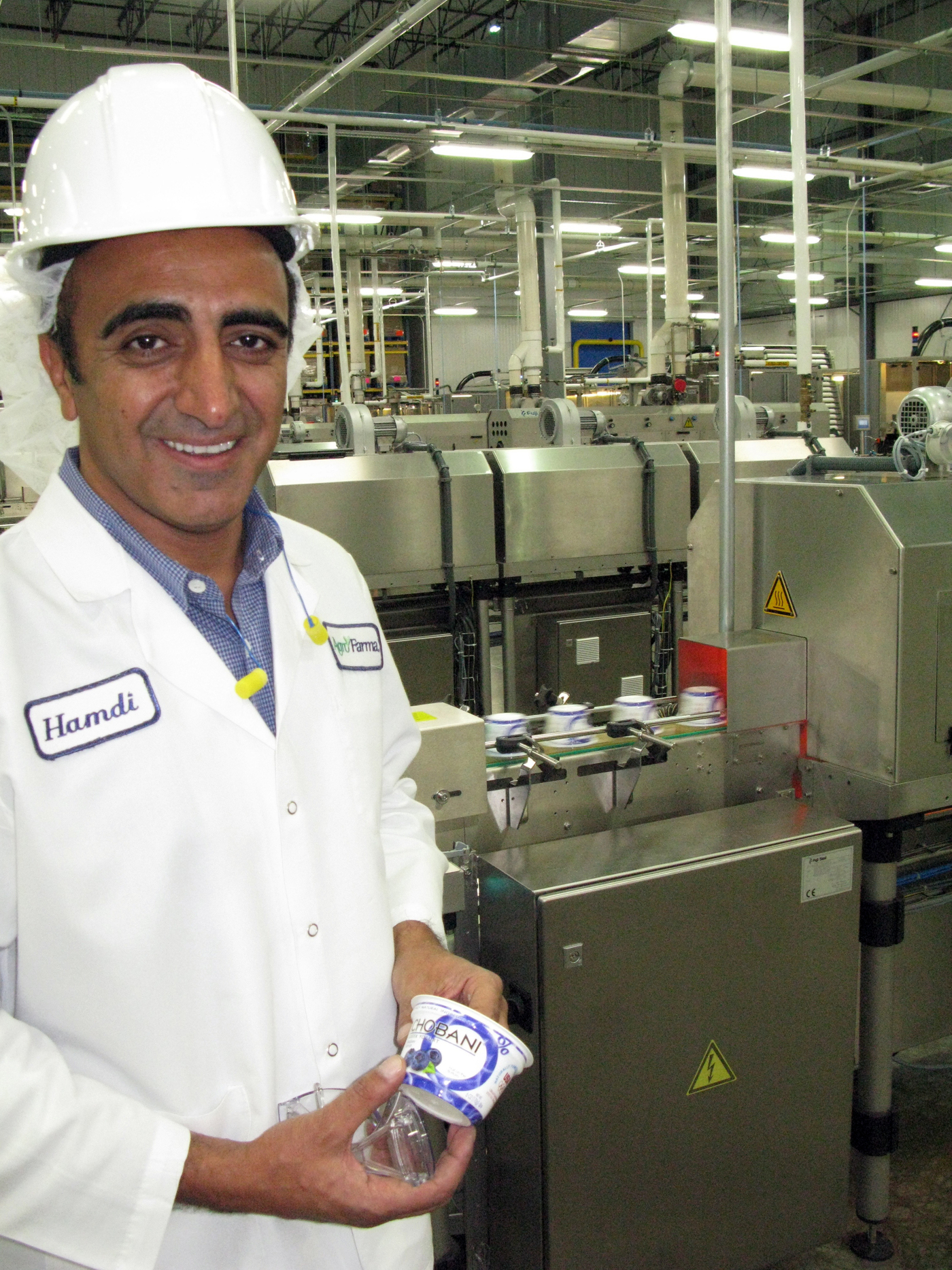 He takes me to the factory, a jungle gym of stainless steel pipes and tanks and loud machinery. One room is full of machines that spin the yogurt and squeeze out the liquid to strain it.

Ulukaya treats these machines like trade secrets. He won't let me take a picture of them. They're a critical piece of his booming business, "and it's not easy to get them," he says. "It takes a year to get them. So you have to plan ahead in order to make it."

Which brings us to the problem facing the rest of the industry. Other companies have watched Greek yogurt take over nearly a quarter of the total yogurt market in just the past five years. They wanted to get into this profitable market segment, too, but they didn't have those machines.

So they called in food scientists like Erhan Yildiz, who is head of research on dairy products at a company called Ingredion. He knows yogurt — he's Turkish, too. Yildiz and his colleagues set about finding a way to make it without those expensive straining machines.

They measured the firmness and thickness of those Greek yogurts, and also some attributes that you may not have heard of — "residual mouth coating," "meltaway" and "jiggle."

"This is almost like fingerprinting a product. That combination of key attributes really identifies what that product is all about," he says.

To duplicate the Greek yogurt, they started with regular yogurt, then added different versions of starch, obtained from corn or tapioca. As they tweaked the quality and quantity of added starch, they kept measuring those key attributes. "If you can measure something, you can manipulate it," says Yildiz.

They arrived at a solution, a "formulated" Greek yogurt that Yildiz says comes pretty close to the original strained version. It's on store shelves now, although Yildiz isn't allowed to say exactly which yogurt manufacturers use his new ingredient.

Yildiz sees nothing wrong with this. Authentic Greek yogurt, he says, is what you make of it.

But Chobani's Ulukaya calls such products cheap imitations. "That ruins the expectation in the consumer's mind of how pure and simple this product is."

Now, there is a legal definition of yogurt. It's a "standard of identity" of yogurt, put out by the Food and Drug Administration.

It says, for instance,that yogurt has to be made from milk and bacterial culture. But that standard is 30 years old, and its interpretation has been the subject of debate. The version that was originally published in 1981 did not allow the addition of thickening agents. But after the industry protested, the FDA "stayed" that section of the regulation.

Most yogurt companies say that you can add starch or concentrated milk protein to their product and still legally call it yogurt, although a newly filed class-action lawsuit disputes this interpretation.

As for whether the yogurt is Greek, though — that seems to be a question for the philosophers.