Accessibility links
Pizza Museum To Offer A Slice Of American Food And Culture : The Salt Some pizza lovers in Philadelphia are taking their affection for the popular food to a new level by opening a museum and restaurant. It will include pieces from the world's largest collection of pizza-related items and, of course, real slices of pizza for sale. 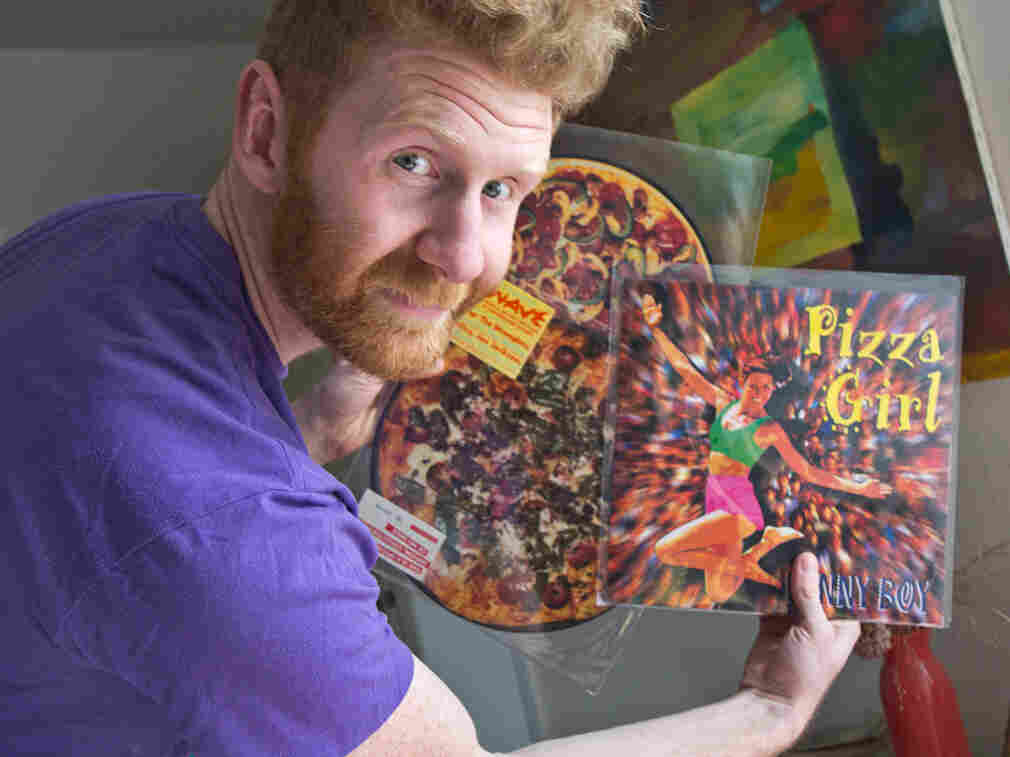 Brian Dwyer owns the world's largest collection of pizza-related items. He plans to display some of his memorabilia, including pizza-themed music records, in a new museum-restaurant in Philadelphia. Kimberly Paynter for NPR hide caption 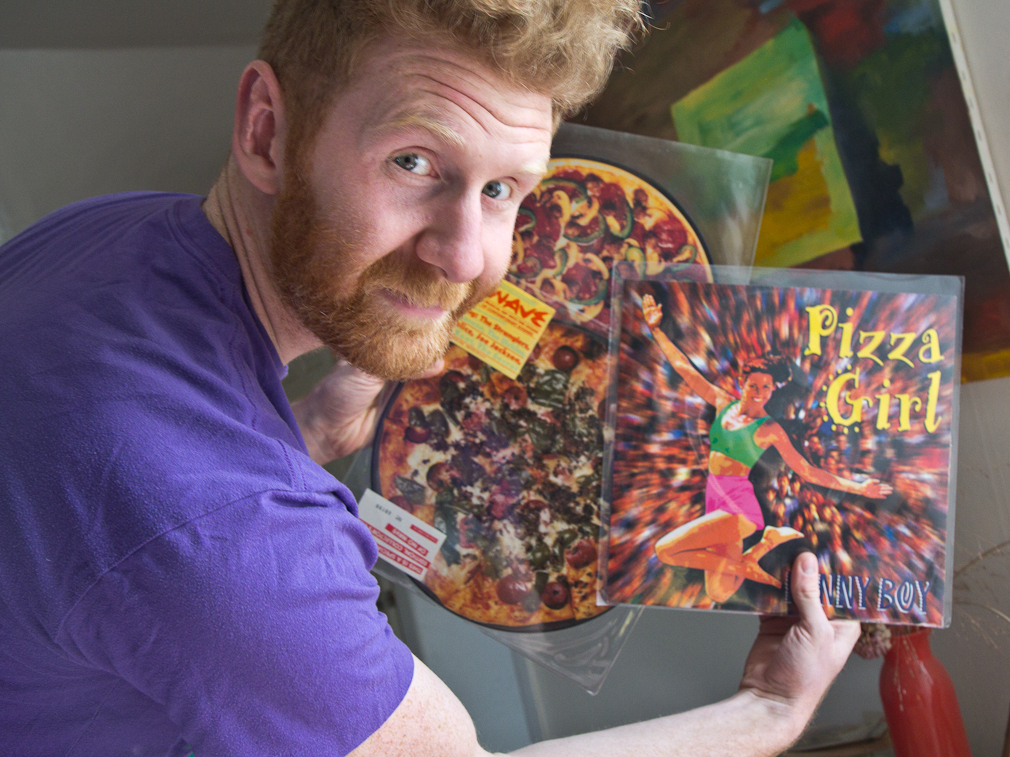 Brian Dwyer owns the world's largest collection of pizza-related items. He plans to display some of his memorabilia, including pizza-themed music records, in a new museum-restaurant in Philadelphia.

Many foods have their own dedicated museums — like burnt food and mustard — so why not pizza? That's what Brian Dwyer, the owner of the world's largest collection of pizza memorabilia, has wondered for a long time.

Dwyer is so into pizza that he has a tattoo on his back of a drawing of himself holding a slice and saying "Totally Saucesome." A tall guy with a shock of wavy red hair, Dwyer owns more than 1,000 toys, knickknacks and other pizza-themed items, like a troll doll in an "I Love Pizza" apron, and a human face made of rubber, trapped inside a pepperoni pizza. 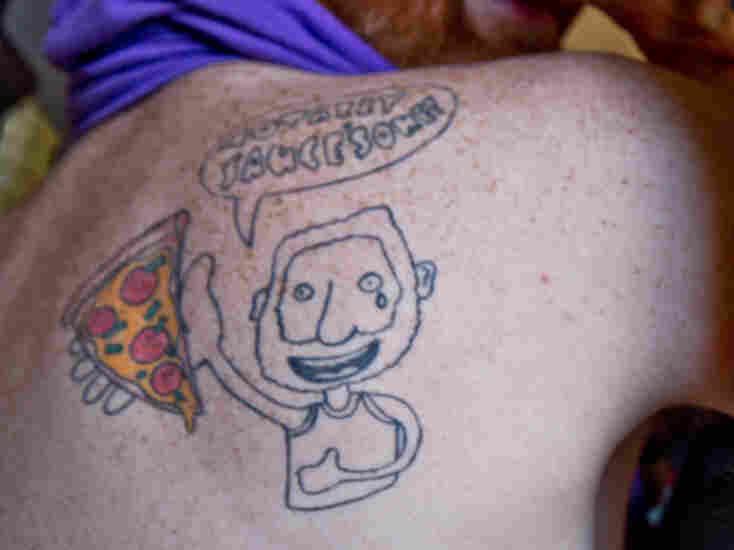 Dwyer branded himself with a tattoo of himself holding a slice. Kimberly Paynter for NPR hide caption 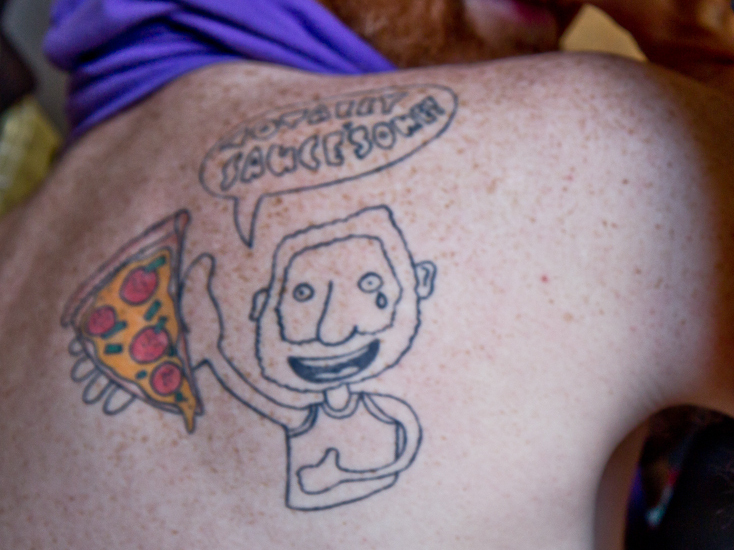 Dwyer branded himself with a tattoo of himself holding a slice.

To address what he thinks is a public lack of pizza love and to display his eclectic collection, Dwyer plans to open a museum and restaurant in Philadelphia next month called Pizza Brain.

Dwyer has enlisted his pals to help him design and build Pizza Brain in Philadelphia's Fishtown neighborhood. Dressed to work, Ryan Anderson wears suspenders over a paint-splattered T-shirt. A tape measure hangs from his jeans.

"We're trying to incorporate this collection into a limited space that is a restaurant," Anderson explains. "All that I want is to not make this place look like an Applebee's or a Hard Rock Cafe or a Cracker Barrel with ephemera just stapled to the walls."

"[The window boxes] will be lit internally, and you'll be able to look through these tiny little peepholes and see other things hidden in there," he explains.

Joe Sulimay, another friend of Dwyer's, says the business has already generated buzz in the neighborhood.

"Everybody's excited about having somebody who's so passionate about having pizza in the neighborhood here [because] pizza's important," Sulimay says. "I eat pizza every week, and it's important to me."

Philadelphia is not an obvious location choice for a pizza museum. The City of Brotherly Love is better known as the home of the Philly cheesesteak. Still, Dwyer believes the city is a perfect match for his eccentric collection full of surprises.

"We want this place to feel like [an] interactive art installation," Dwyer says. "Instead of just putting it all in a bunch of cases that are very linear and sterile, where you just kind of stare at it and say 'There's a thing' and walk away, this is like, 'Oh! What's this little thing? ... There's a pizza face!' "

Dwyer knows some might think he's odd for collecting all this stuff, but he points out he didn't make the memorabilia. He's only giving it a home.

There's been a lot of buzz about the museum opening, but what about the real pizza that will be served in the restaurant? Pizza Brain's website promises it will be "artisan" and that the shop will do things in a "socially, ethically and environmentally responsible fashion."

I guess we'll have to wait and see what it tastes like.