Accessibility links
Okra: Love The Veggie, Lose The Slime : The Salt Okra is becoming more popular outside of the American South as chefs find ways to tame the vegetable's tendency to get slimy when cooked for long periods of time. Okra likely originated in Africa, and was brought to the U.S. by slaves. 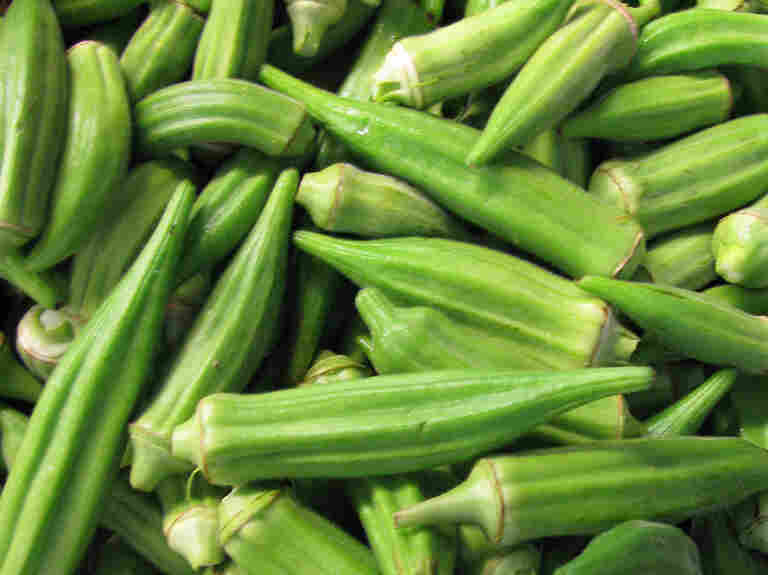 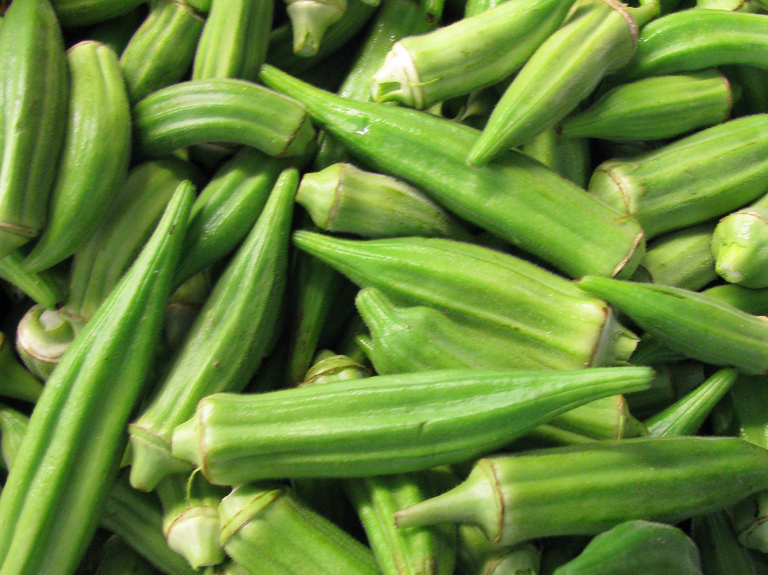 Don't let the fear of slime keep you from trying okra.

If you've never loved okra, let me guess your hang-up — It's kinda slimy? Those bright green pods, that look so distinctive at the market, can easily turn brownish and gooey when they're cooked.

Why? The plant (a member of the Mallow family) actually secrets a gummy (or gelatinous) substance, called mucilage, when it's sliced open. And this explains how it works as a thickener in Creole style gumbo.

But Executive Chef Coby Ming of Harvest Restaurant in Louisville, Ky., has a tip for those who want less slime and more crunch: Don't cook it to death. The technique she learned growing up — quick-frying okra in a cast iron skillet (details below) - works like a charm. "I never witnessed the slime factor!" Ming says.

As okra appears on more high-end menus, such as Art Smith's Table Fifty-Two in Chicago, it's clear there's lots of ways to prepare it - including pickled. Northerners may be warming up to the mucilaginous munch, but it's undoubtedly southern fare.

"Okra earns its Southern cred by way of its African birth," says John T. Edge of the Southern Foodways Alliance. African ingredients and techniques - he explains- are "touchstones" of Southern cuisine. And okra was also popular among the French colonists in Louisiana according to researchers at Texas A&M's Aggie Horticulture.

The researchers say okra likely originated in the area of Africa that includes present-day Ethiopia -- and eventually made its way into Northern Africa, the Mediterranean and India before spreading to the New World.

With the fusion of ethnic cuisines, a southern restaurant can certainly blend in some Indian traditions. Edge says, take for example, his favorite okra dish of late: Okra Chaat, prepared by Chef Vish Bhatt at Snack Bar in Oxford, Mississippi. It's made with Roasted Virginia Peanuts, Tomato, Cilantro, Lime, and Chaat Masala.

Chef Spike Gjerde of Woodberry Kitchen in Baltimore says Marylanders have warmed up to okra. "We surprise them with it." His technique is to roast at high temperatures, and top it off with a touch of tomato preserves or a fruit jam.

Gjerde, who sources most of his food from local farmers, says okra's doing well. "I've seen more and more of the growers that we work with here growing different types of okra."

Then add to a very hot cast iron skillet with a thin layer of bacon fat....stir until crispy on all sides (about 7-10 minutes).

Remove with a slotted spoon and sprinkle with salt and pepper. Serve.