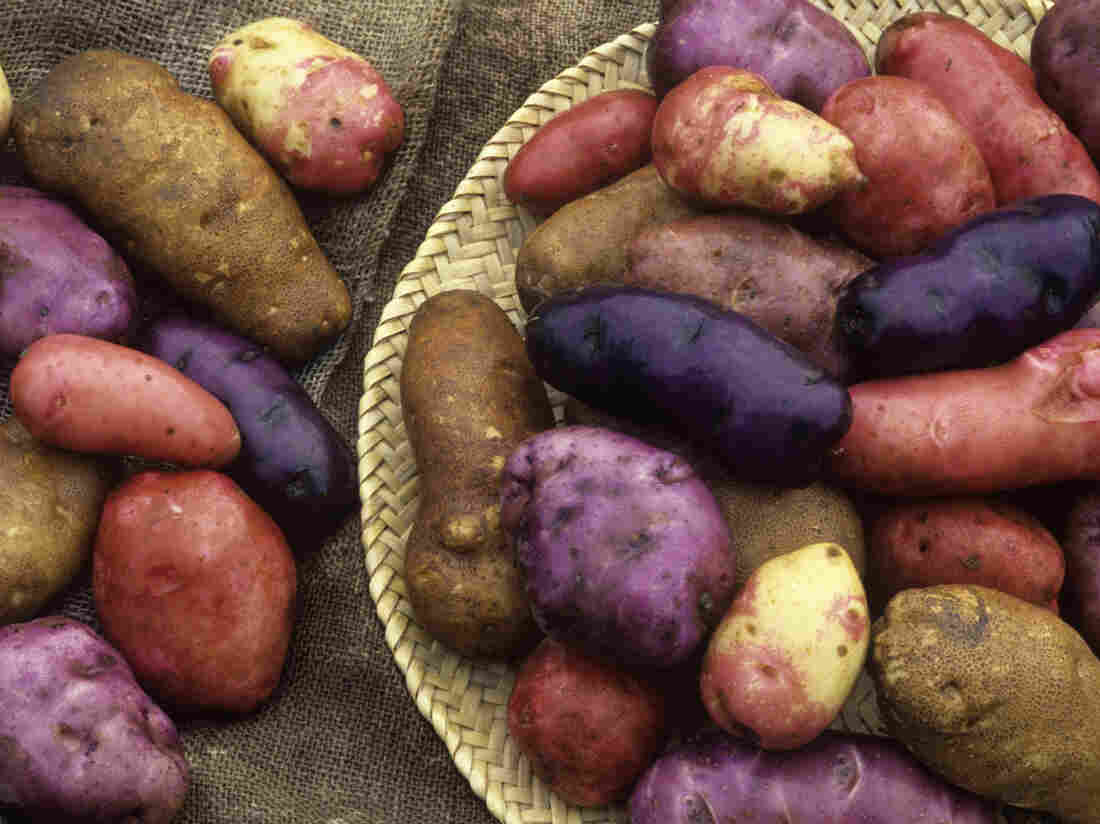 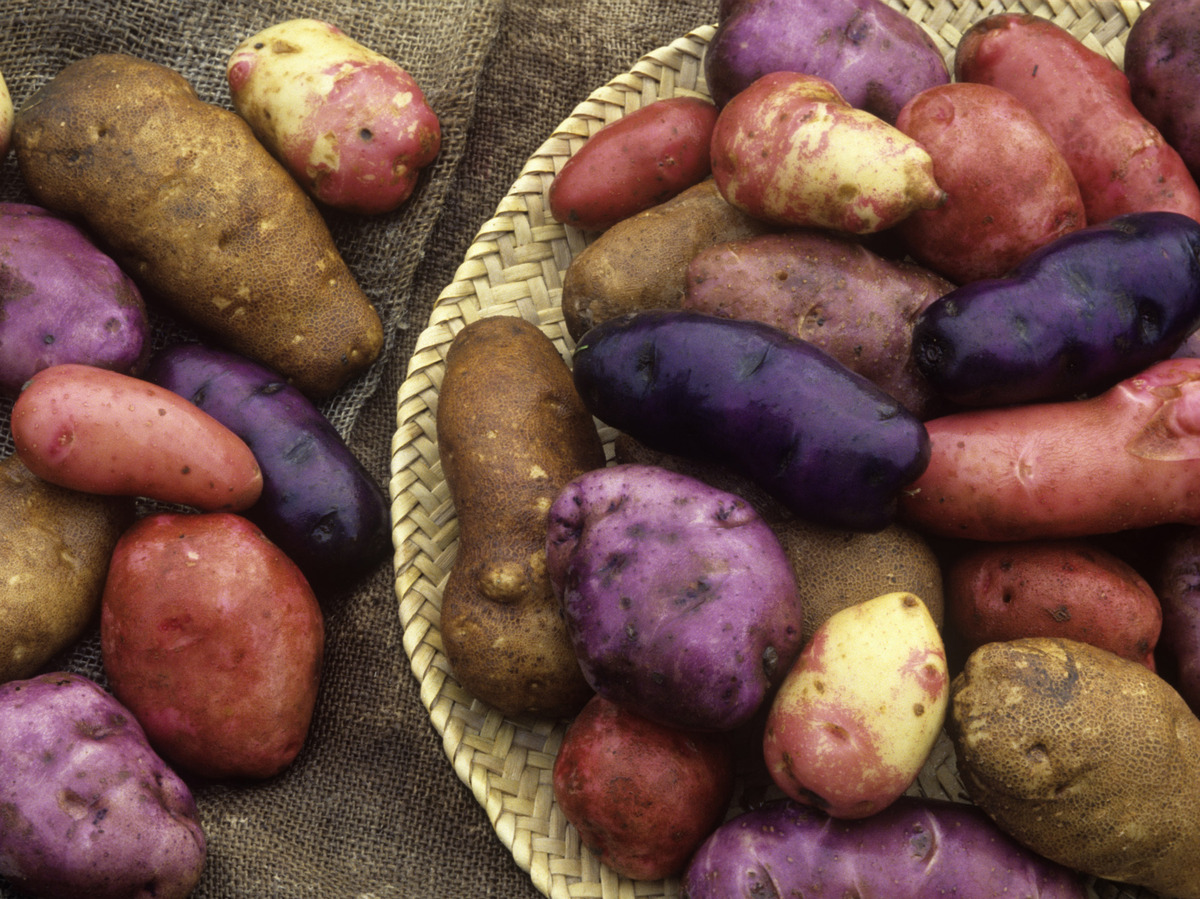 The sizzle seems to be gone from America's long-term relationship with the potato. Consumers are eating fewer of them, especially the kind that's not fried in a vat of hot oil. But what if a new and different potato arrived in town? A stylish one, with colorful flesh that was good for you, too?

Get ready. It's happening, in part, thanks to Chuck Brown, a geneticist who works for the USDA's Agricultural Research Service in Prosser, Wash. Brown's job involves poking around in odd corners of the potato gene pool. His goal used to be finding genes to make potatoes less vulnerable to insects, or disease. He didn't think much about changing the good old reliable potato itself — until one day in the early 1990s.

"I was walking through the field on harvest day," Brown recalls, "and the glint — the sunlight glinting off some of the tubers — kind of caught my interest. And I went over there with my knife and started cutting them. And I found some that had orange flesh." 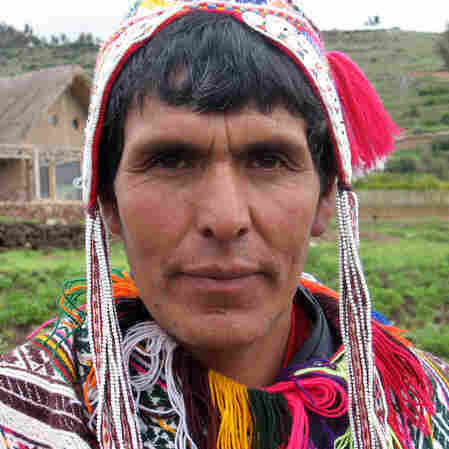 Andean Peru is a colorful world — and the highland potatoes are just as vivid. Take a photographic journey.
Jane Greenhalgh/NPR

Brown wasn't completely surprised. He'd once worked in Peru — the potato's ancestral homeland — and he'd seen all kinds of strange-looking potatoes there: long, thin ones; potatoes with sunken eyes; blue and yellow ones.

It occurred to him that orange potatoes might be useful in the U.S., too, because the color orange usually signals that a plant contains valuable nutrients called carotenoids.

But he didn't really pursue this idea until a few years later when he stumbled upon yet another exotic potato; this one had solidly red flesh.

"To me this was astounding. I hadn't even seen this kind of thing in Peru," Brown says. "I'd seen solidly purple flesh, but I'd never seen solidly red flesh."

Another scientist, Ron Wrolstad at Oregon State University, figured out that the color came from pigments called anthocyanins. These pigments are really valuable. They're antioxidants and can help protect the body against various diseases. You can get them from fruits like blueberries and cranberries. But Wrolstad "realized right away that potatoes would be a much better way to provide people this pigment," Brown says. "Everybody can afford potatoes, and everybody kind of likes potatoes. You know, kids like potatoes; adults like potatoes."

So Brown went back to some of the huge variety that exists in the potatoes of South America to learn to breed new potatoes for the North American market. These would be potatoes with new colors, more nutrients and with a variety of tastes.

"We should return to this kind of variation and promote it as a healthful potato, as a good thing," he says. 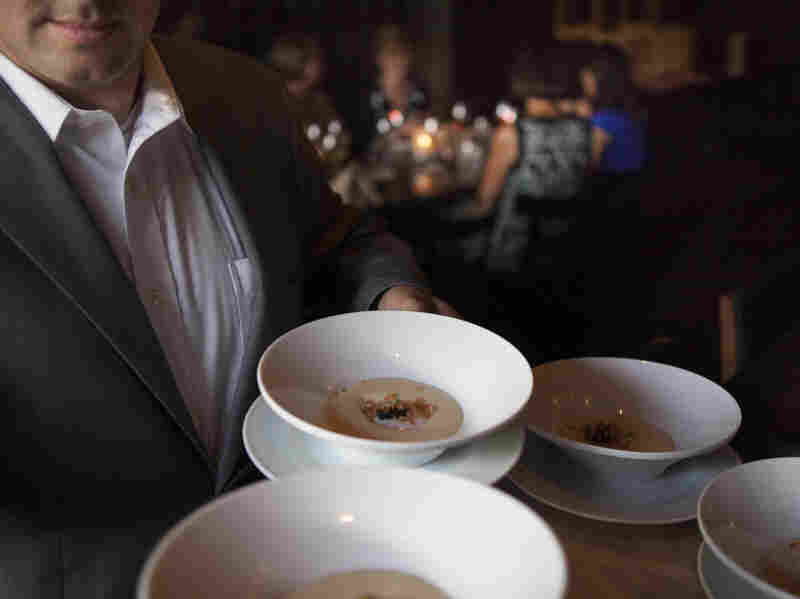 A server at Ardeo+Bardeo shows off potato mousse with a coddled egg hidden inside. Benjamin Morris/NPR hide caption 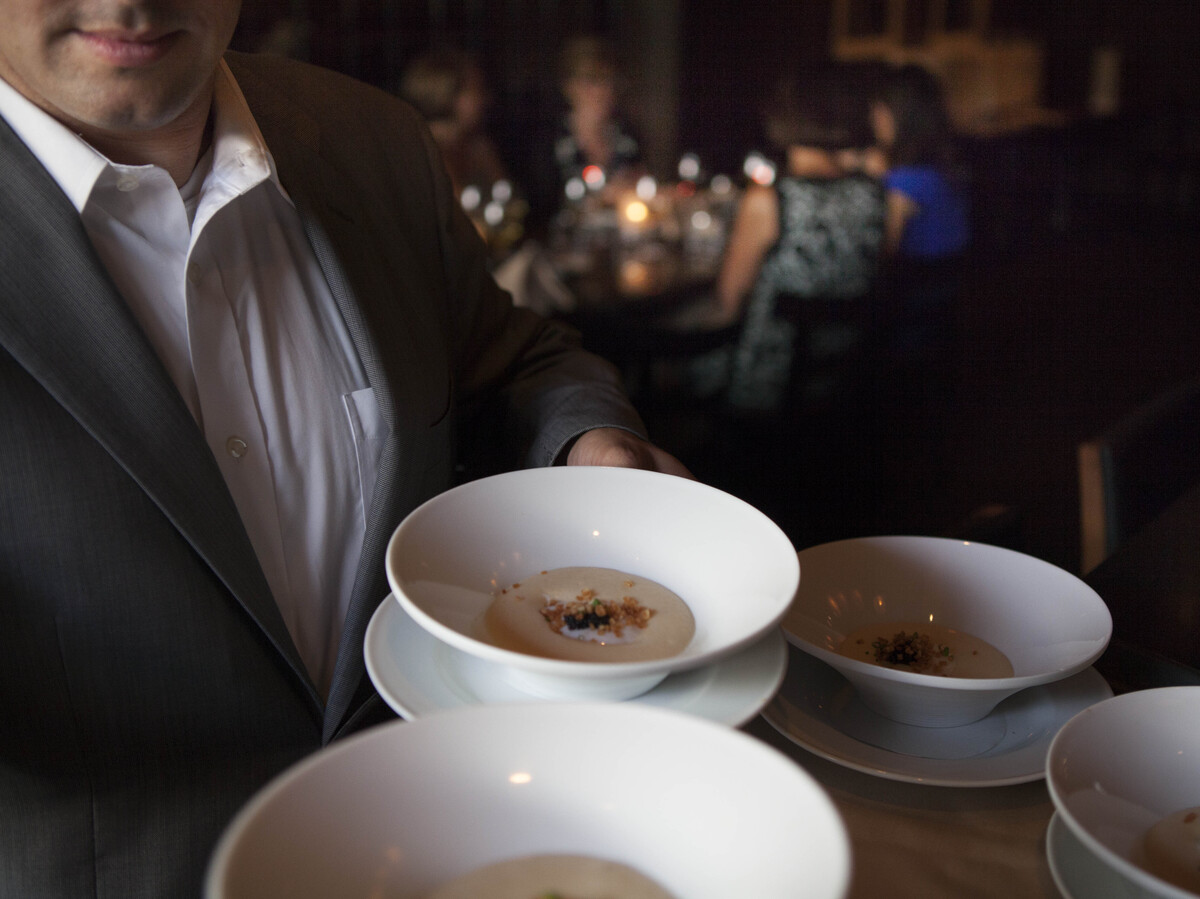 A server at Ardeo+Bardeo shows off potato mousse with a coddled egg hidden inside.

Taking A Risk At The Market

Other potato breeders have joined Brown's quest, and there now are some results. You can find purple potatoes at many farmers markets. Red-fleshed varieties just became available in the past two years, and a few growers are now trying them out. There are even multicolored potatoes in the pipeline.

There's just one problem, Brown points out: "These kinds of potatoes are hard to get, still."

You can find them in some high-end restaurants — especially near the heart of American potato-growing, in the Pacific Northwest. But mainstream supermarkets are a different story. It can be hard to convince them to stock something new, "and if they put it out and they don't sell much, they're probably going to drop it. I've seen this happen a lot," Brown says. 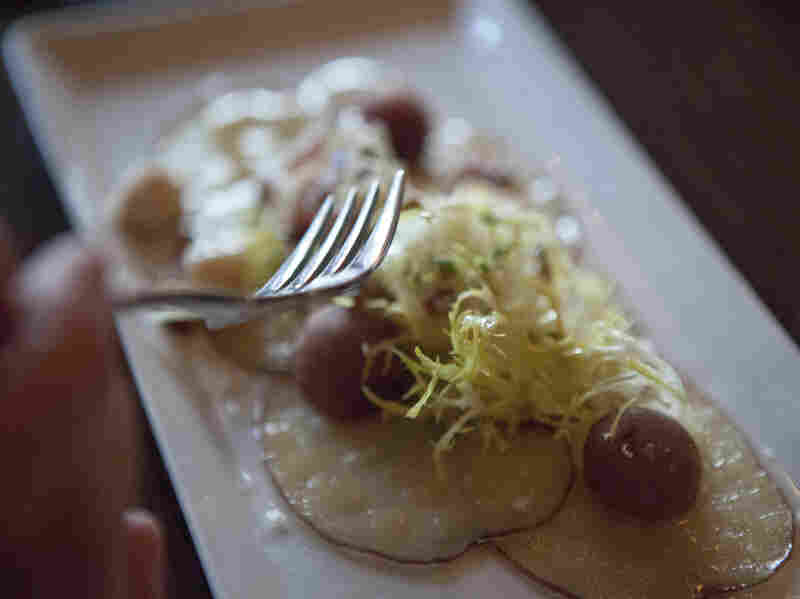 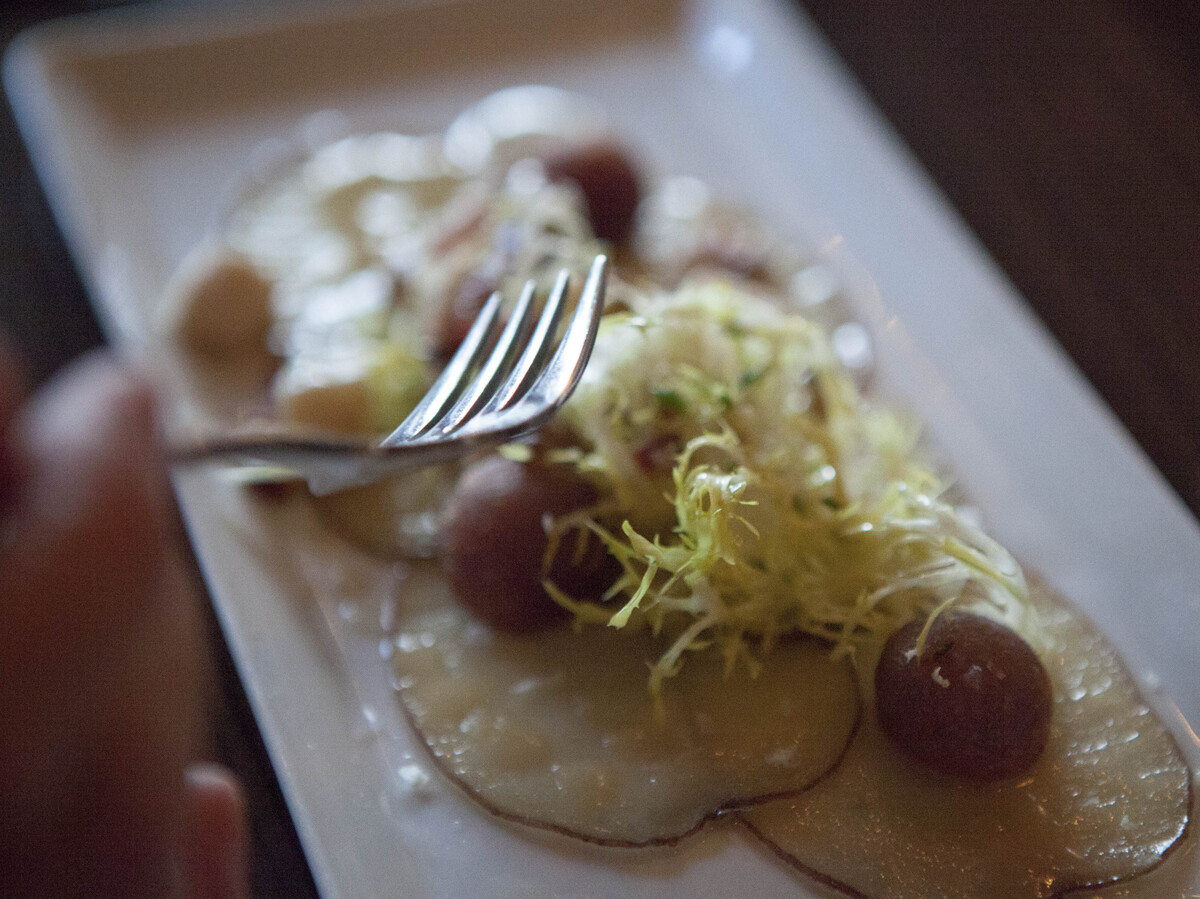 Getting Ready For The Runway And The Buffet

Some big players in the potato industry are looking for ways to give their product an extreme makeover. They want to convince consumers that the potato is good for you, despite what you may have heard lately, and perhaps even more important: It can be exciting and seriously trendy.

That's why the U.S. Potato Board recently asked the staff at Ardeo+Bardeo, one of Washington, D.C.'s nicer restaurants, to put together a "potato-centric" meal.

Did it ever. There were seven courses, plus appetizers. Some of the highlights: red and purple potato confit; gnocchi, of course; and smoked white potato mousse with some runny egg and caviar.

"There's a few things that we experimented with, through the process, that really surprised even us, as to how far we could push the potato," says J.B. Samuel, the manager at Ardeo+Bardeo.

The Potato Board had one request for this meal. It had to include seven different kinds of potatoes. Some were the old standbys, like the rough brown-skinned russets. But there also were little finger-shaped potatoes called fingerlings and purple potatoes.

It's all part of an effort to persuade consumers and chefs that new kinds of potatoes offer new tastes, textures and colors.

So the Potato Board is really excited about Chuck Brown's colorful potatoes. They fit in perfectly with this image makeover.

And Brown is hoping that tomorrow's supermarket will have a very different kind of potato section. "I think it should look like the apple section," he says. Maybe 10, maybe 15 different types of potatoes."

Something like this has happened, in fact, in Great Britain. Grocery stores there stock half a dozen different kinds of potatoes. That's a much greater variety than was typical a decade ago.

One potato expert told NPR that among some British consumers, the potato is finally hot.