Accessibility links
Got Heartburn? Maybe You Should Rethink Your Drink : The Salt Spicy, acidic foods and heavy meals often get blamed when we experience heartburn. But researchers say that uncomfortable feeling may also be linked to what we're drinking: namely, alcohol, coffee and other caffeinated beverages. 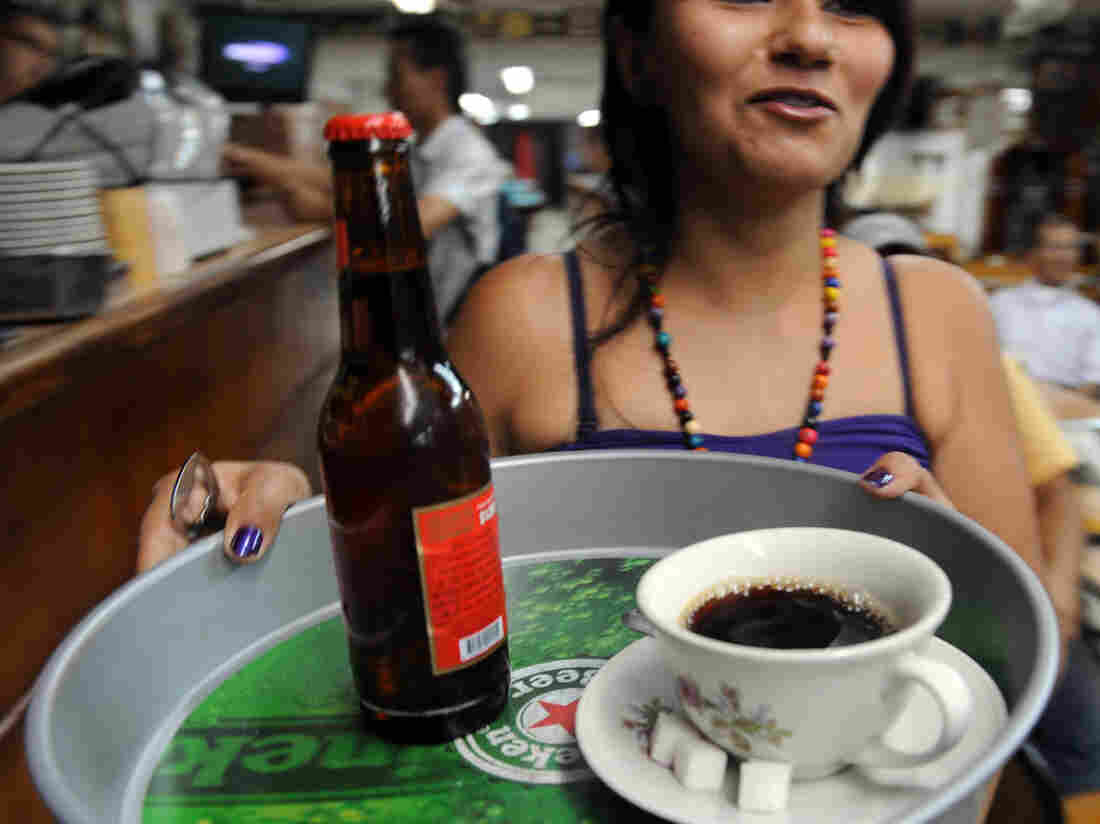 A waitress delivers a coffee and beer in Medellin, Colombia, in this 2010 file photo. Both drinks can trigger acid reflux. Raul Arboleda/AFP/Getty Images hide caption

Many of us experience heartburn, or reflux, from time to time — and when we do, we're quick to point the finger at heavy, fatty meals. But that burning, uncomfortable feeling may also be the result of what we're drinking: namely, coffee and other caffeinated beverages, and alcohol.

"Alcohol has a direct effect" on heartburn, says Kevin Ghassemi, a gastroenterologist at the University of California, Los Angeles. "Temporarily, of course."

The reason, he explains, is a ring of muscle — called the lower esophageal sphincter — located at the junction between the stomach and the esophagus.

"The muscle is supposed to be closed, except when food is passing into the esophagus," explains Ghassemi.

But alcohol can relax the sphincter muscle and create an opening. When this happens, stomach acid "can come back up into the esophagus, and that's reflux," Ghassemi says. That's what creates the burning sensation. 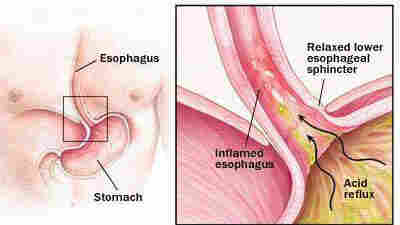 Alcohol, coffee and other caffeinated beverages can relax the sphincter muscle at the lower end of your esophagus, allowing stomach acid to come back up. Mayo Clinic hide caption

It's a similar story with caffeine. "The caffeine that's in coffee or other caffeinated beverages also will relax the sphincter muscle," he says.

Clearly, not everyone gets reflux after drinking alcohol or caffeine. Some people are predisposed: They may have a weak or faulty sphincter muscle to begin with. Being overweight or obese increases significantly increases the risk.

Cutting back on coffee or alcohol may — or may not — help. Often times, Ghassemi says, people with chronic reflux need prescription medicines to treat the problem.

If your heartburn is occasional, you may want to try some other tweaks to your diet.

But don't accept the conventional thinking that spicy foods and acidic foods such as tomato sauce and citrus are necessarily problematic.

"People are afraid of ... orange juice and tomato sauce, and really there's no clear link between these foods and acid reflux," says Karthik Ravi, a gastroenterologist at the Mayo Clinic.

Some people may notice that acidic foods don't agree with them, but Ravi says there's limited evidence that these foods increase acid secretion, and many heartburn patients do fine after eating them.

Ravi published a study that found alkaline foods — such as burgers and shakes, which are not acidic at all — also led to heartburn in people prone to the condition.

"What that tells us is, you know, it doesn't really matter what you eat ... because you're really refluxing acid that your stomach itself is making," Ravi says.

It's more likely that the fat in a heavy meal will exacerbate the problem. Why? Fatty foods stay in the stomach longer. And the more you eat, the fuller your stomach gets — and the more hospitable the conditions become for reflux.

Ravi tells his patients to use the law of common sense. We're all different, so if a particular food bothers you, by all means avoid it.

But in general, Ravi's advice comes down to this: Eat what you enjoy, but slow down, slim down your portions, and avoid large, fatty meals.

"There's more of a focus on modifying how you eat than necessarily what you eat," he says. And taking a mindful approach to eating is best.

"Eating smaller meals and eating a little more slowly is going to help with your reflux symptoms," Ravi says.