Accessibility links
Saving Lives In Africa With The Humble Sweet Potato : The Salt In Africa, a nutrition success story: Swapping orange sweet potatoes for white ones is improving the health of children by boosting vitamin A levels. Researchers are now trying to duplicate their success with other crops. 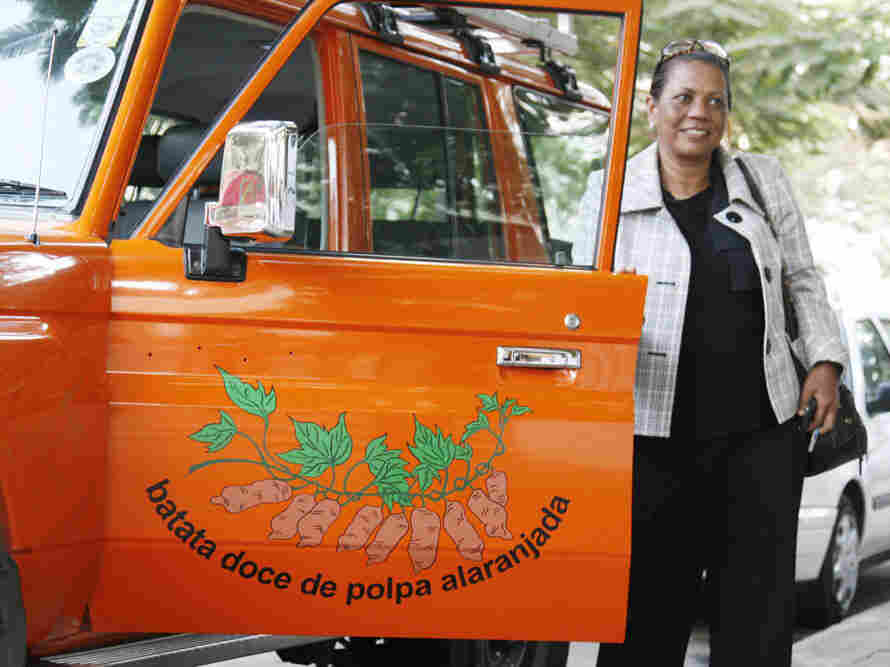 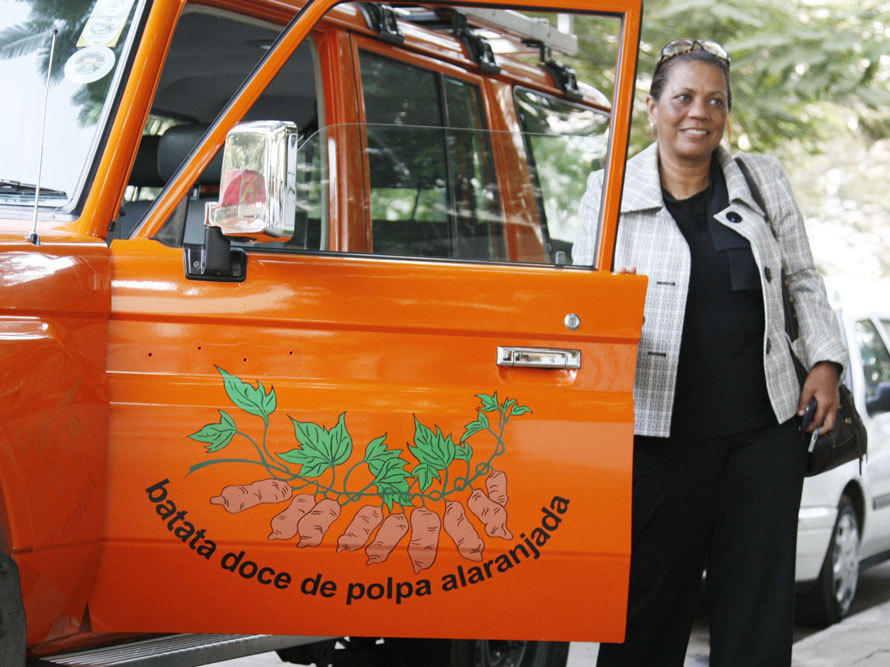 A regular old orange-colored sweet potato might not seem too exciting to many of us.

But in parts of Africa, that sweet potato is very exciting to public health experts who see it as a living vitamin A supplement. A campaign to promote orange varieties of sweet potatoes in Mozambique and Uganda (instead of the white or yellow ones that are more commonly grown there) now seems to be succeeding. (Check out this cool infographic on the campaign.) It's a sign that a new approach to improving nutrition among the world's poor might actually work.

Howarth Bouis is one of the people who came up with this idea, and he's been promoting it for the past two decades. He's an economist at the International Food Policy Research Institute in Washington, D.C., and director of an international effort called HarvestPlus that's creating more nutritious crops. But the idea of biofortification, he explains, grew out of earlier studies of vitamin supplements that nutritionists carried out in Asia and Africa.

In some cases, they found that just giving malnourished children a vitamin A capsule every six months cut the death rate among those children by about 25 percent. "This number really astounded the nutrition community," says Bouis. "Then they started looking at iron and zinc and iodine deficiencies." They discovered that these micronutrients make a huge difference in people's health. 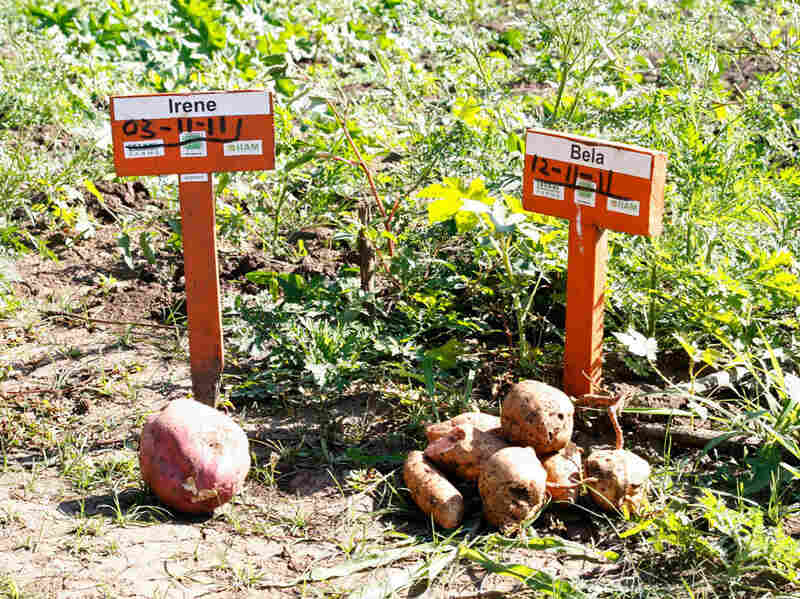 These two varieties of orange sweet potatoes are being promoted in Mozambique for their tolerance to drought. Dan Charles/NPR hide caption 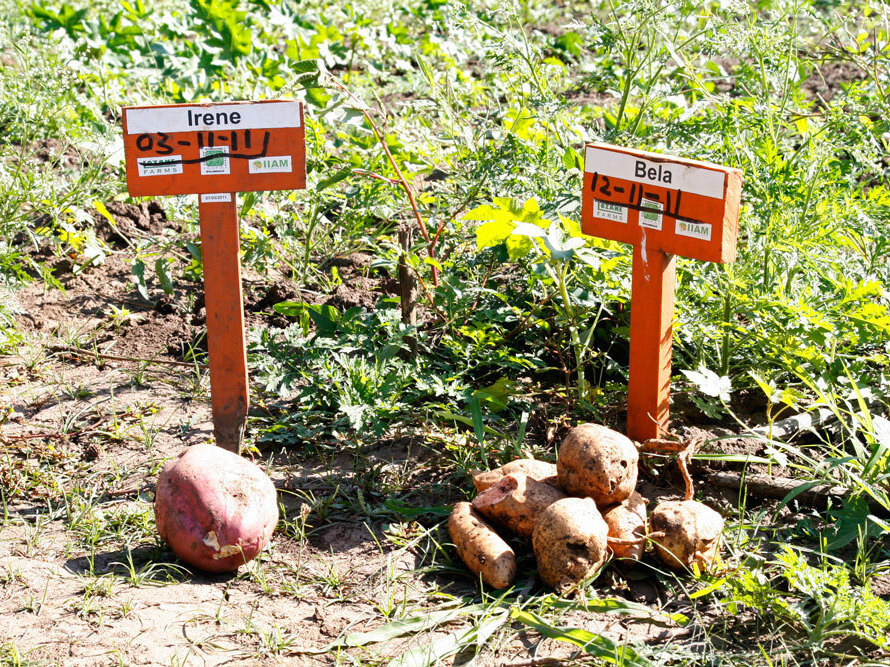 These two varieties of orange sweet potatoes are being promoted in Mozambique for their tolerance to drought.

Poor people often don't get enough of them because they spend their scarce money on cheap and basic foods like rice or corn. Those crops deliver calories, but not all the vitamins and minerals you need.

The problem is, getting those capsules to hundreds of millions of people, many of them in remote villages, gets very expensive.

At that point, Bouis had his eureka moment: Why can't we find a way for people to get those essential micronutrients from the staple foods that people are eating already? Why not try to breed varieties of corn or rice that are naturally higher in iron or vitamin A?

From Theory To Reality On The Ground

But the idea of biofortification didn't immediately catch on. Public health experts worried it would be a waste of money; crop breeders feared low yields and rejection by the population if the crops looked different.

Two decades later, the advocates have come up with varieties of some crops that have more micronutrients. The HarvestPlus effort is using traditional plant breeding. Others have created a genetically engineered "golden rice," which provides more vitamin A.

Their first real success in the field, though, is the orange sweet potato.

In several African countries, including Uganda and Mozambique, subsistence farmers grow a lot of sweet potatoes. They've been doing it for centuries, ever since the Portuguese brought the first sweet potatoes here from Latin America.

The sweet potatoes that arrived in Africa, however, were white or yellow. Unfortunately, those sweet potatoes don't contain any beta carotene, which the body uses to make vitamin A.

But the orange flesh of the North American sweet potato does.

So when Bouis and others started pushing the idea of biofortification, sweet potato breeders realized that they didn't have to start from scratch. "We realized that the orange-fleshed sweet potato that is eaten in the U.S. really could provide a lot of vitamin A for the people in Africa," says Maria Isabel Andrade, from the International Potato Center, who is based in Mozambique.

Selling A Population On A Better Potato

Andrade became an evangelist for the orange sweet potato. She helped find varieties that would grow well in Mozambique (the first of these varieties were distributed in 1997) and worked to get them widely distributed. 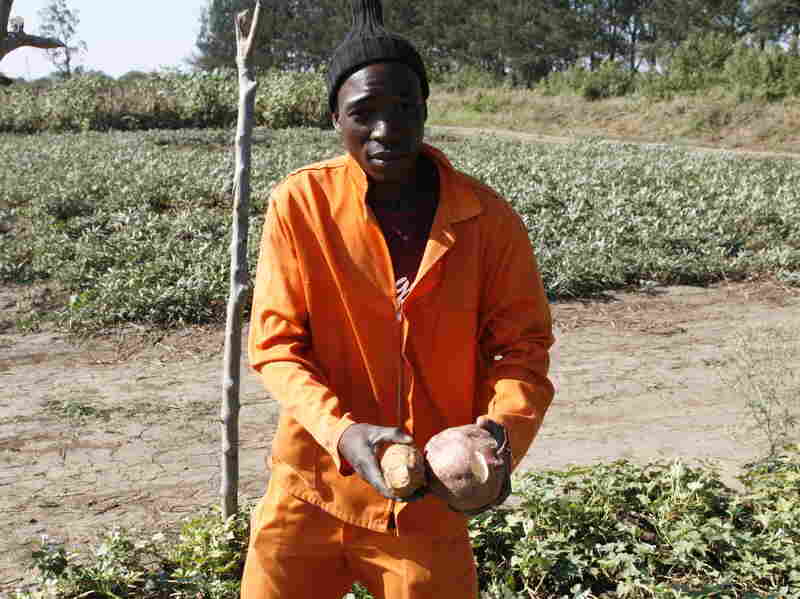 She drives a bright orange Toyota Land Cruiser with pictures of sweet potatoes painted on the side. She's working with the government on a big marketing campaign that includes radio spots and personal visits to countless villages. "We are still doing this: theater in villages, singing about orange flesh sweet potato, how good it is, how you feed it to your children, and showing recipes so that they get used to it," says Andrade.

I see evidence of her success at urban markets and rural roadside markets — piles of sweet potatoes for sale. Many have one small end cut off, just to show that they're orange inside.

"This potato is healthier," one of the sellers, Jaume Otavio Martin, tells me. "It has more vitamins. These are the sweet potatoes that people want to eat, now. That's why I grow them. They're more profitable."

About a third of all the sweet potatoes in Mozambique, Andrade says, now are orange.

Recently, scientists gathered evidence from Mozambique and Uganda that these vegetables are, in fact, improving people's lives. Children who are eating them do have more vitamin A in their blood. Based on other studies of the effects of vitamin A, nutritionists are confident that the boost is big enough to improve the health of those children.

The researchers involved in the HarvestPlus effort are now trying to duplicate this success with other crops.

Just this year, they started distributing new varieties of beans to farmers in Rwanda and a new kind of pearl millet in India. Both are high in iron. In Zambia, they are starting to distribute a type of corn that has deep orange kernels, high in beta carotene.

Yet farming changes slowly in Africa, and it probably will take at least a decade before anyone knows whether these crops are doing as much good as the orange sweet potato.