Accessibility links
President Obama's Tour Bus Rolls With White House Home Brew : The Salt President Obama has shown he's a fan of beer, one of the most politically expedient drinks a candidate can endorse. But now the president has revealed that he travels with his own home-brew — and he even gave a man in Iowa a bottle to prove it. 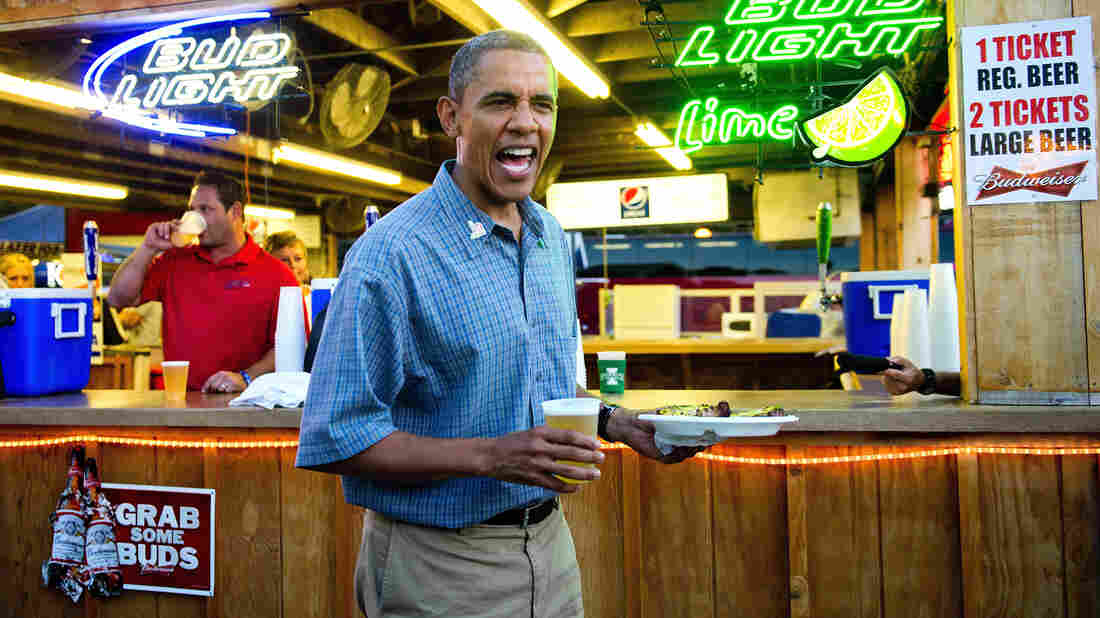 President Barack Obama gets a beer and a pork chop as he visits the Iowa State Fair in Des Moines. Earlier, the president gave a man at a coffee shop a bottle of the White House's home brew. Jim Watson/AFP/Getty Images hide caption 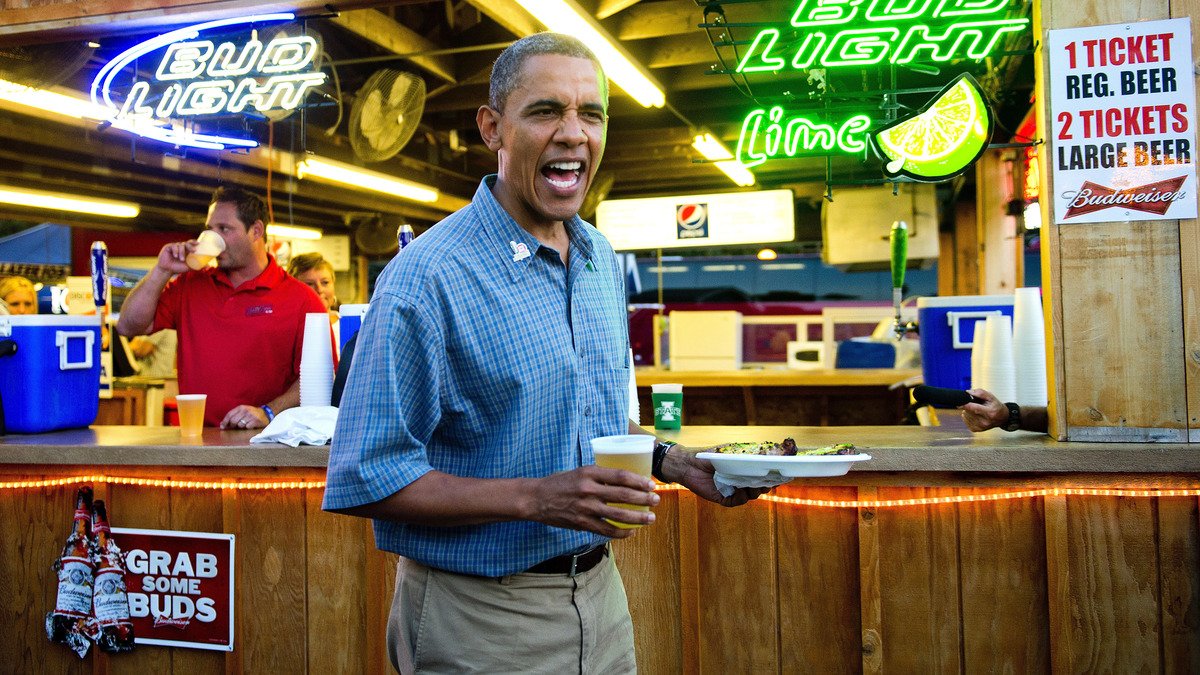 President Barack Obama gets a beer and a pork chop as he visits the Iowa State Fair in Des Moines. Earlier, the president gave a man at a coffee shop a bottle of the White House's home brew.

It seemed normal enough when President Obama chatted with a coffee shop patron about beer in Iowa Tuesday. The president has shown he's a fan of beer — and it's the most politically expedient, "everyman" beverage a candidate can drink. But then the president told a man at Knoxville, Iowa's Coffee Connection cafe that he travels with his own home-brew — and gave him a bottle to prove it.

Now comes news that Obama's homebrew is packed aboard his campaign bus. At the end of his coffeehouse chat, the president had a bottle brought in for his new beer buddy. Watching this, the press corps who travel with the president were thunderstruck. And they wanted answers from White House Press Secretary Jay Carney.

Carney took flurries of questions about the beer. One reporter asked about transporting the homemade brew across state lines, in a line that drew laughter from the press pool: "Does the Treasury Department know about this?"

Carney was also asked, "Any other distilleries in the White House we don't know about?"

"There's a lot going on behind the trees on the South Lawn," he said.

In our earlier story, we noted that President Obama doesn't exactly hover around the carboy with a thermometer, agonizing over alcohol levels. The White House kitchen staff reportedly does all the actual brewing. But the president has shown he's a fan of small brewers, such as Chicago's Goose Island. He once gave a sample of that beer to British Prime Minister David Cameron.

Asked if he'd tried the White House beer, Carney said he had — calling it "superb" — and added that he thinks there are both light and dark style beers. But he wasn't sure who is in charge of the brewing.

"Usually, when somebody hands me a beer I don't ask how it was made. I just drink it," he said.

You can expect to keep seeing politicians hoisting beers this campaign season. It's become a well-established political prop: Many candidates use it to signal to voters, "Hey, I'm drinking a frosty mug just like you — you really should vote for me, because we have so much in common."

Consider that Obama, who clearly enjoys the White House brew, will also happily drink a Bud Light with folks at the state fair, as our colleague Scott Horsley reports. He even treated for one round — sparking a rallying call of "Four More Beers!" from the crowd.

As The Washington Post reports, the "beer vote" is crucial — especially when going after independent voters:

"According to a survey conducted by Scarborough Research, 47 percent of independent voters drank a beer in the past 30 days, while just 40 percent of Republicans and 39 percent of Democrats did."