Accessibility links
Peaches, Beautiful And Fleeting, Thanks To Fuzzy Thin Skin : The Salt A summer peach is a seasonal treat, but why are they so hard to find for the rest of the year? As it turns out, that fuzzy, thin skin might be partially to blame for the fruit's finicky reputation.

Peaches, Beautiful And Fleeting, Thanks To Fuzzy Thin Skin

Peaches, Beautiful And Fleeting, Thanks To Fuzzy Thin Skin 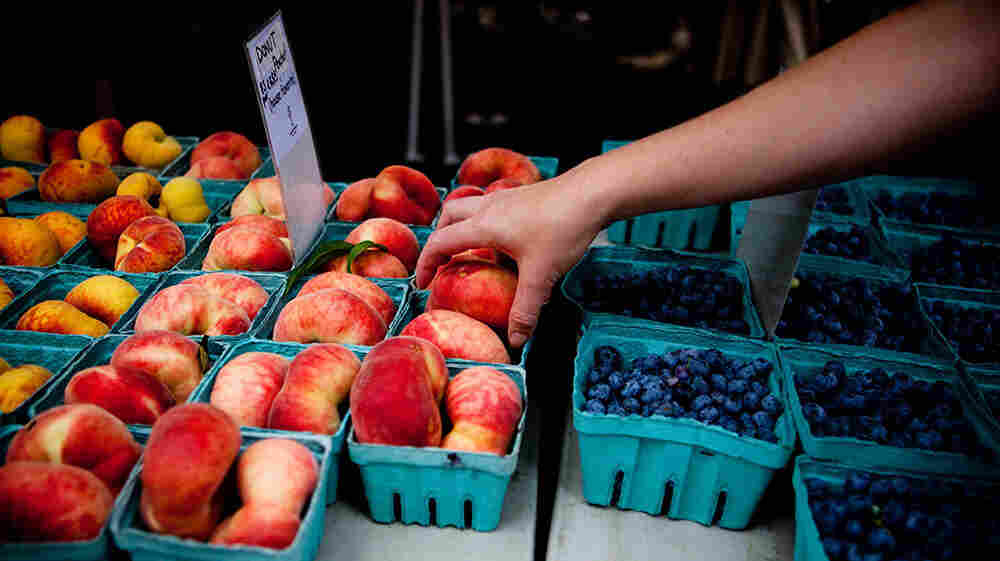 If lately you've noticed the farmers' market flooded with signs that say "donut," "cling," "whiteflesh" and "freestone," you won't be surprised to learn that August is National Peach Month. Though the juicy fruits pack the produce aisles now, in a few short months a good peach might be hard to find.

Many fruits, though harvested in other parts of the world, are available in the United States all year long. So why are peaches so seasonal, and in the winter, either difficult to find or hard as a rock?

To clear up our "fuzzy" understanding, The Salt turned to Will McClatchey, vice president and director of research at the Botanical Research Institute of Texas. McClatchey says that peaches are easy to find in the late summer and early fall because they tend to ripen all at once. Though the plant's "limited-time only" strategy is annoying to consumers, biologically, it makes them very efficient reproducers.

"If you're a fruit tree, the best way to get your fruit dispersed is to have a whole bunch of fruit [at once] so then the animals come and go crazy eating fruit, which helps secure the next generation of trees," says McClatchey. Although nowadays we're the animals going crazy over peaches, the trees originated in Central Asia, their fruits initially feeding large mammals like bears, camels, and elephants, he says.

Spanish explorers initially brought peaches from Asia to the Americas, says McClatchey, and the fruit can be grown in both the northern and southern hemispheres. South American farmers use reversed summer and winter seasons to their advantage when supplying many fruits to North America. But there's a reason we don't see thousands of Peruvian peaches in December.

"Peaches have a really hard time shipping. Apples have a relatively thick skin...it's difficult for microbes, like fungi or bacteria on the surface of the apple, to get inside where the food is," McClatchey says, "Whereas a peach—not so good. It's much easier for microorganisms to get inside a peach, have a little feast on the sugars that are in there, and cause decay."

The peach's delicate skin even makes it a finicky fruit for domestic farmers to sell. Jim Frazee, owner of Twin Springs Fruit Farms in Orrtanna, Pennsylvania, says that though apples can be stored up to a year in a low-oxygen controlled environment, peaches are only good for about two weeks after they've been picked. And this short lifespan may be reduced even more if the fruits have been handled by dozens of choosy shoppers.

"Peaches definitely bruise easily. We sell everything by the pound, so the customer can choose their fruit. And the customers really like that, but the fruit definitely suffers," Frazee says. Though his farm tries to sell the bruised fruits as seconds, he says that while bruised apples can be made into cider, severely bruised peaches often have to be discarded.

But what to do with the bruised ones?

Some of them are taking on new life, thanks to New Jersey peach farmers, Campbell's Soup, and the Food Bank of South Jersey, according to a blog post on philly.com. Just Peachy Salsa, made from bruised peaches on donated Campbell's equipment, was introduced this summer as a tasty way to fight peach waste and raise money for the food bank.