Accessibility links
Creating A Schwenker World, One Backyard Grill At A Time : The Salt It sounds a little dirty, but a schwenker is just a German word for a swinging grill that looks like a tripod, set over charcoal. Schwenker evangelists are spreading the word about this unique grill around the world. 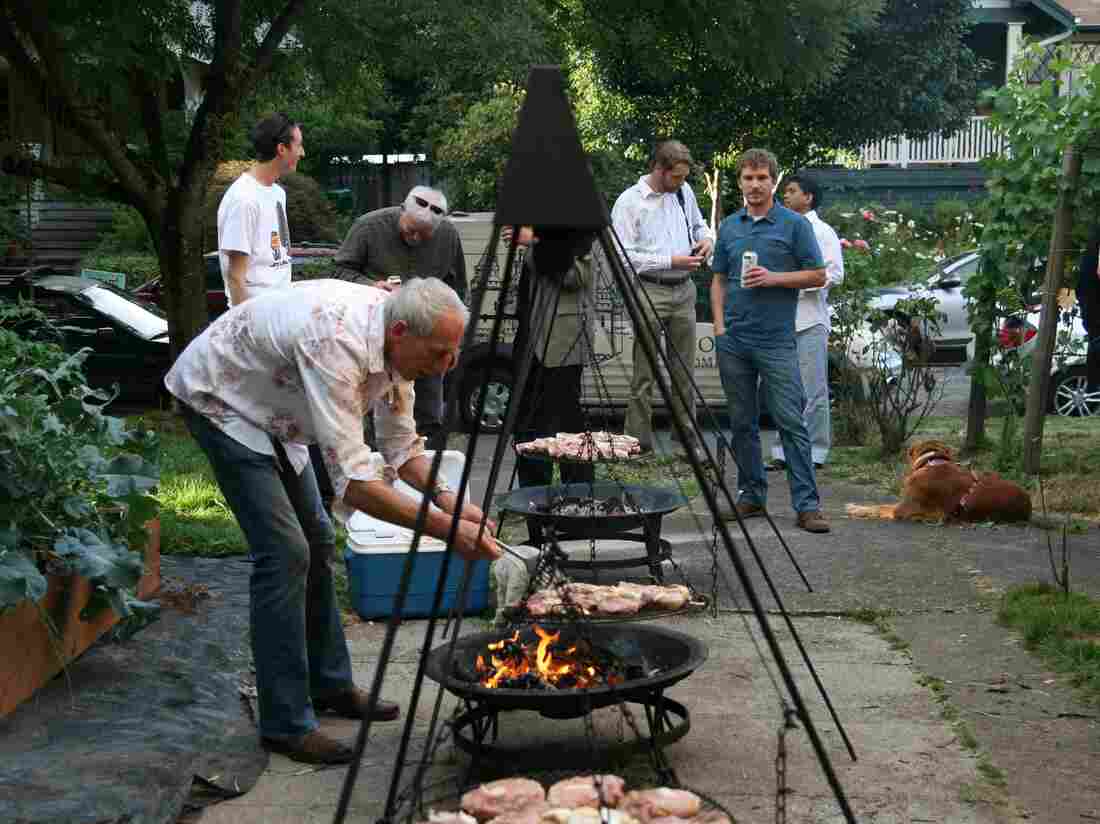 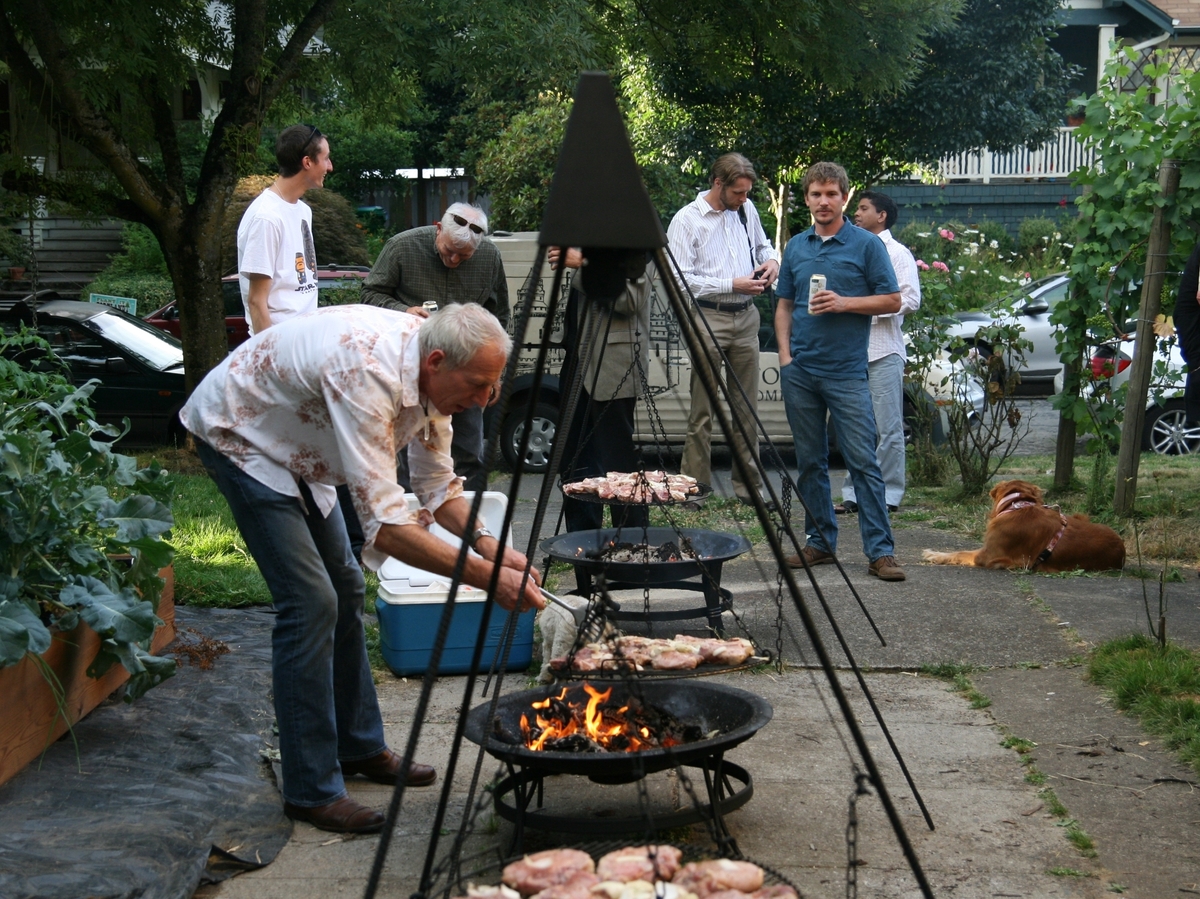 Ewald Mosel keeps the schwenkers swinging to ensure that the pork cooks evenly, while hungry guests look on.

Beyond bratwurst, we generally don't think of German food as summertime food. In fact, many of us don't think about German food much at all. But one delicious German tradition is catching on this barbecue season — schwenker.

Schwenker is one of those German words that just sounds kind of naughty. But in a few places — the Mosel Valley in western Germany, and the state of Saarland next to it — schwenker means three nice things. It's a cut of pork, usually from the neck. It's also the person who grills this meat, and most importantly, it's a sort of strange, swinging grill you cook it on.

But it's always a party, as I found out recently in a backyard in Portland.

Ewald Mosel grew up in Germany, where he cooked out on the schwenker every summer. The grill he uses hangs on a large tripod, suspended over the coals. With a little push from the schwenkmeister — that's Mosel — it swings back and forth, cooking the meat evenly.

"You can turn it around, in a circle, or you move it back. But you always keep it moving," he says, demonstrating.

Because Germany's Mosel Valley is a wine-growing region, the fire is traditionally built out of charcoal and dried grape vines.

"In particular, when you drink a glass of Riesling with it, it all comes together. The meat, the wood and the wine — it's all perfect," Mosel says.

These vine trimmings come from the winery of Barnaby Tuttle, here in Oregon.

Tuttle first saw a schwenker on a wine-buying trip in Germany, and was inspired to make his own out of some rebar, chain and an old grill.

"People love it. I mean, you're playing with fire. And you're swinging things; there's different swing techniques. It's something so intrinsically human, sitting around a fire, playing with food," he says.

The schwenker has clearly won fans in America. But that's not the only place. Bjoern Gottschall is the founder of Schwenk the World, a group that's trying to spread the gospel of schwenking all over the globe.

Schwenk the World "ambassadors" from Saarland have held schwenk parties everywhere from Thailand to Romania. And people really make it their own.

"In Cameroon, people put some bananas on the schwenker — this was quite exotic. And in Japan, for example, people put octopus. In Israel, they actually put the whole pita bread, with filling of egg and I don't know what on the schwenker. And so you can schwenk almost anything," Gottschall says.

Mix the ingredients together in a container, and refrigerate for three days. Cook on the schwenker (tossing the onions and herbs on the grill as well), ideally over a grape vine fire, until done to your liking on each side.

Gottschall says that unlike the American cookout, where one guy's manning the grill, the schwenker is a true group activity. Anyone can give it a swing.

"Preparing food together around a fire brings people to a very basic level of human being. So in every country, every kind of people are coming to the schwenk, and they have no borders to talk to each other," he says.

So how does the schwenker meat taste? Back in Portland, people are filling up their plates with grilled pork.

"Nice crust outside, and it's smoky, and then soft and juicy inside. It's delicious — it tastes like home," says Mosel.

As with most traditional foods, schwenker recipes vary from village to village. Some use juniper berries, some garlic, but all feature a long marinade time to let the onions season and soften the pork.

This recipe here comes from Barnaby and Olga Tuttle, via their friend, Anne Junglen of Zeltingen, Germany.