Accessibility links
How A Biofuel Dream Called Jatropha Came Crashing Down : The Salt People thought the hardy Jatropha tree was the answer to the food vs. fuel debate, until it wasn't. Financial hard times and a misunderstanding revealed this biofuel to be like all the rest — in need of good food and water. 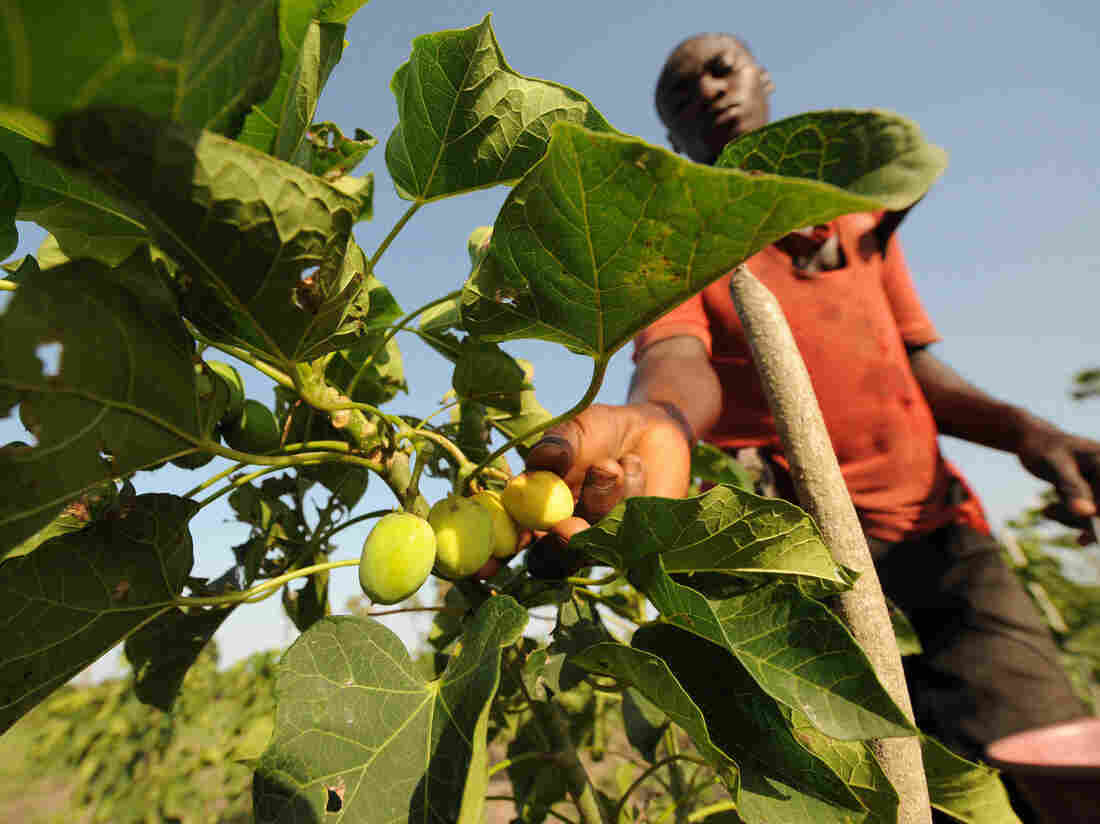 A man harvests fruits of the Jatropha tree in Taabo, Ivory Coast. Jatropha, which is grown in many parts of the world, has fallen from favor as a diesel fuel substitute. Kambou Sia/AFP/Getty Images hide caption 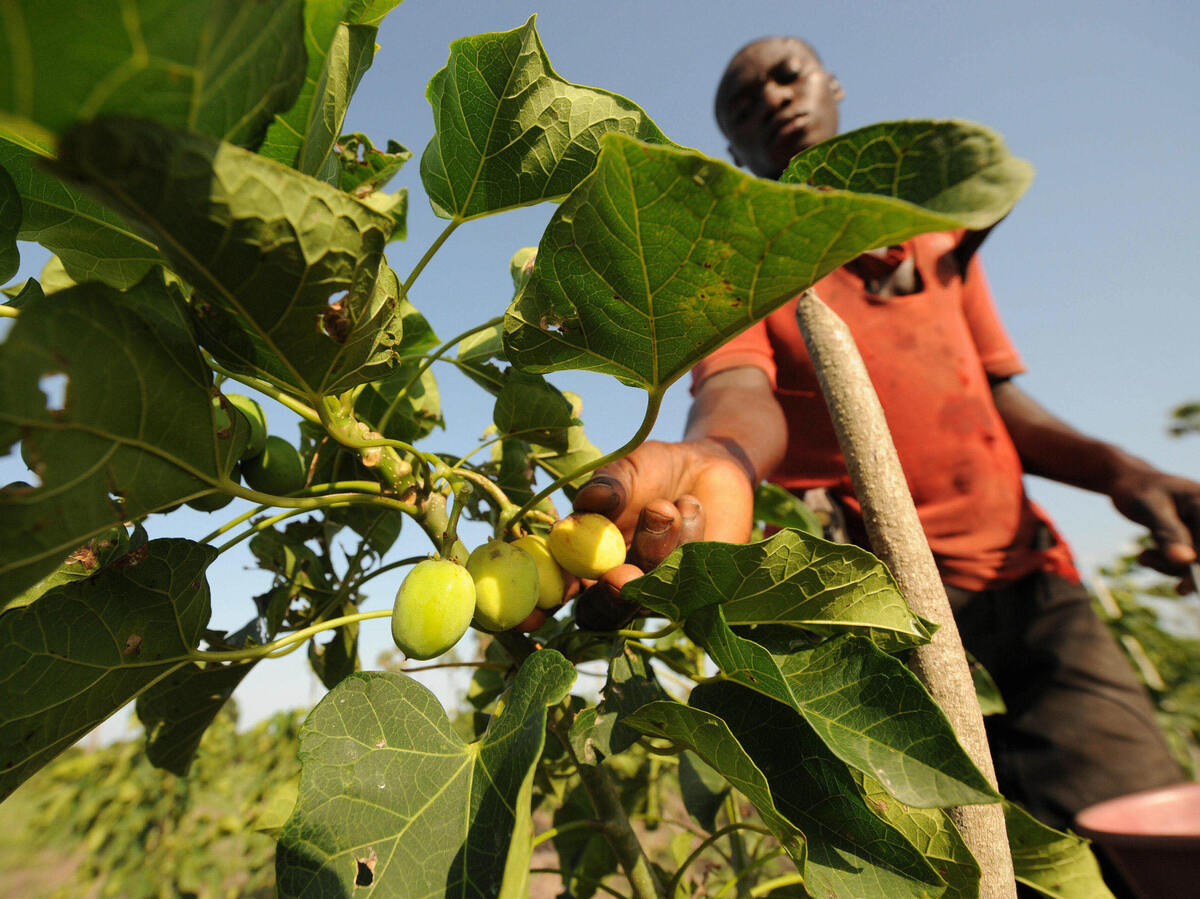 A man harvests fruits of the Jatropha tree in Taabo, Ivory Coast. Jatropha, which is grown in many parts of the world, has fallen from favor as a diesel fuel substitute.

From Congress to The Colbert Report, people are talking about the Midwestern drought and debating whether it makes sense to convert the country's shrinking corn supplies into ethanol to power our cars.

It's the latest installment of the long-running food vs. fuel battle.

But wouldn't it be lovely if somebody came up with a biofuel that didn't take food out of people's mouths?

A few years ago, some people thought they'd found it: A miracle tree called Jatropha. Unfortunately, the miracle turned out to be a mirage.

Jatropha does not, at first glance, seem all that enticing. It's a big bush that can grow into a small tree. Its leaves are poisonous. So are its little football-shaped fruit pods. But inside those pods are several black seeds, each one about twice the size of a coffee bean. Crush those seeds, and you get oil. The oil is good for making soap, burning in lamps — or converting into diesel fuel.

Ywe Jan Franken, an expert on biofuels for the FACT Foundation, a research group in the Netherlands, says this plant grows all over the tropics, including Indonesia, the Philippines, Cambodia, India and Latin America. (It originated in Central America, and Europeans spread it to their various colonies several centuries ago.)

It's an extremely hardy plant, and grows in places where most plants would die. "If you grow it on sandy soil, with not too many nutrients, and with dry periods, the plant miraculously survives," says Franken.

This is what really caught people's attention about a decade ago.

At that time, oil prices were soaring. People were getting increasingly worried about global warming. And some governments came to the conclusion that part of the answer could be biofuels, such as corn or palm oil. These biological fuel factories take carbon dioxide out of the air as they grow, which reduces the planet's burden of greenhouse gases.

As soon as they started to scale up biofuel production, however, they ran into the food v. fuel problem. More fertile land for biofuels means less food or forests.

At that point, a few experts recalled the virtues of Jatropha. If this bush could thrive on unused land, barren land, they thought, the world could enjoy biofuel without the guilt of cutting into food production.

The Jatropha Boom, Then Bust

Investors loved the idea. Around 2007 and 2008, they threw money at Jatropha projects, including huge plantations covering tens of thousands of acres, all over the tropics.

Mozambique, in southern Africa, was among the most active new centers of Jatropha cultivation. The country's president himself went from village to village, telling people to plant Jatropha trees. Home-grown fuel, he said, could turn life around for small villages. Belchion Lucas, a former reporter for Radio Mozambique, says that the president "used to say that they can even produce oil at home, without a factory."

Within just a few years, though, the dream of the perfect biofuel collapsed.

This was partly due to the financial crisis. When it hit, late in 2008, the easy money dried up. Foreign investors pulled out of some projects, leaving them in limbo.

But there was a bigger problem. The miracle plant turned out not to be so miraculous, after all.

Ywe Jan Franken, from FACT Foundation, says much of the enthusiasm about Jatropha was based on a misunderstanding. It's true, he says, that the tree can survive droughts, and poor soil. But under those conditions, it won't produce many seeds. If you actually want a good harvest of oil, he says, the plant "needs nutrients and water, just like any other crop." (Here is FACT Foundation's full technical assessment of Jatropha.)

This means that Jatropha fields will compete for the same fertile land as food crops. Welcome back, food vs. fuel.

Many of the companies that jumped into the Jatropha business have now climbed back out again; others are cutting back their operations.

Some of the projects, he says, "promised the farmers high returns, as has been done so many times with new ideas, or crops. And in this case, they thought, 'Wow, we can make some money here, because there is such high demand for biofuels.' And they actually lost money, because they could have done something else."

The Future Of The Biofuel

But Franken also believes that the Jatropha story isn't quite finished.

Two things are happening. In some African villages, there's now some low-tech, small-scale production of Jatropha oil. Farmers can grow the trees as hedges or on poor land, and it costs them very little time or money.

Meanwhile, on the high-tech side, scientists are studying this tree for the first time. They're selecting plants that produce more seeds, breeding high-yielding varieties, turning it from a semi-wild plant into a real crop. Perhaps, after many years of such breeding, it will become as productive as corn or palm trees.

Yet it still will do best on fertile land, with plenty of water, just like every other crop, whether for food or biofuel.