Accessibility links
Meet A Man On A Mission To Save Rare And Unusual Figs : The Salt Bassem Samaan of Bethlehem, Pa., is on a quest to save rare varieties of figs often growing unnoticed, right under our noses in neighbors' backyards. He's donated some of his finds to a government-backed fruit tree preserve in California. 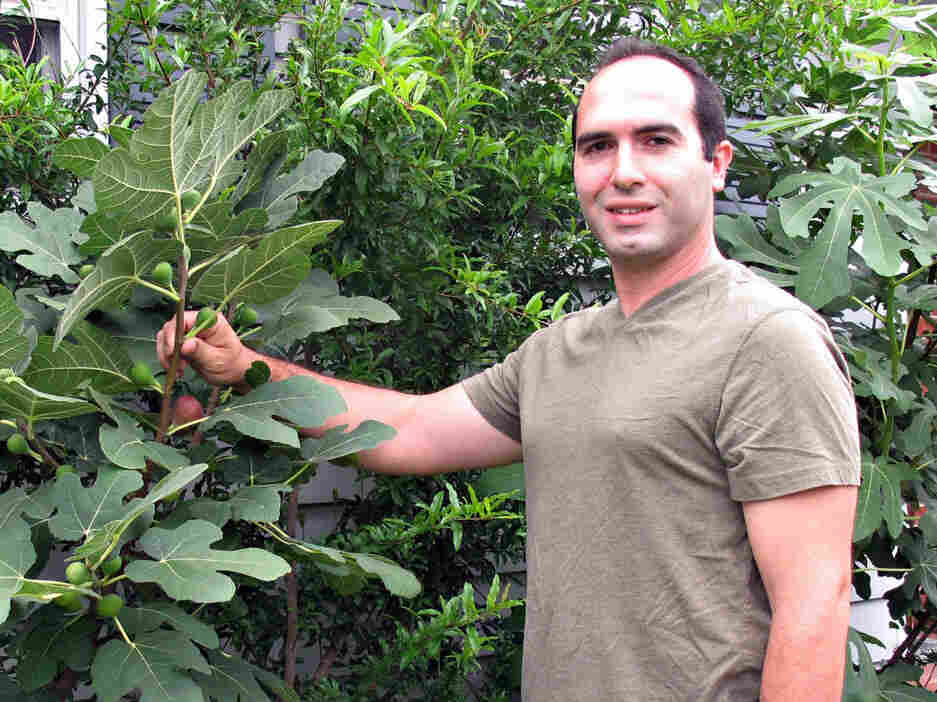 Bassem Samaan, of Bethlehem, Pa., shows off one of many rare fig varieties in his garden. courtesy Bassem Samaan hide caption 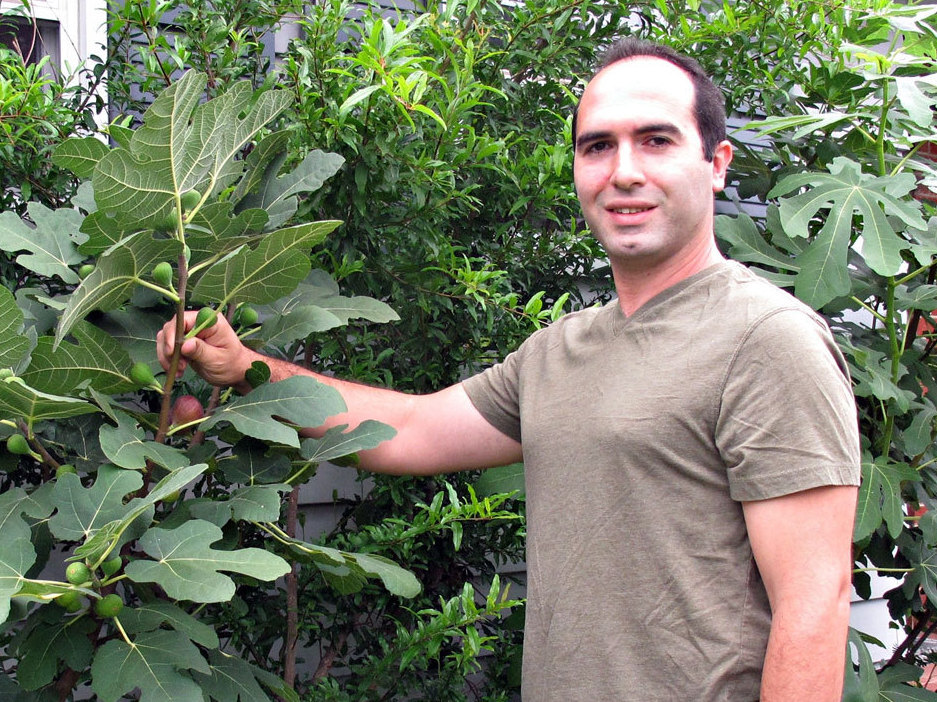 Bassem Samaan, of Bethlehem, Pa., shows off one of many rare fig varieties in his garden.

In the backyard of an unassuming suburban home in Bethlehem, Pa., is a global cornucopia of botanical heritage. Almost 300 varieties of fig grow here, most of them with roots in Europe, Asia or Africa, and each one collected and propagated by Bassem Samaan, a 34-year-old Lebanese native with an unusually green thumb and an obsession with figs.

Samaan is one of a handful of eccentric gardeners around the world whose goal is to save and preserve rare or unusual fruit varieties — trees that may never have commercial value and which may barely cling to existence.

Although some of us may only associate figs with the filling in a certain quaint cookie, figs are actually teardrop-shaped fruits, sticky and jam-like within their thin, leathery skins. They can be green, brown, purple or black, and tend to split as the fruits swell and ripen. A fig's flesh is silky and studded with tiny crunchy seeds. Redder-fleshed varieties often resemble raspberry jam in taste, while those with more amber-toned interiors tend to taste nuttier, often with notes of chocolate and honey.

Samaan's love of figs goes back to his upbringing in Lebanon, where figs are as familiar as apples are to Americans. The trees can grow on most rural properties, and in the late-summer season, the ripe fruits abound in households and markets. By raising figs in the suburbs of Pennsylvania, Samaan has brought to his new homeland a taste of the old.

Black Mission, Calimyrna, Brown Turkey and Kadota figs cover about 10,000 acres of orchards in California and are used mostly in Fig Newtons, but thousands of lesser known varieties exist.

"I'm not interested in the commercial fig varieties," Samaan says. "I want to grow unknown varieties, great figs that deserve to be discovered and distributed."

Samaan operates a small business called Trees of Joy, through which he sells cuttings of his trees to interested gardeners and farmers. He keeps a number of fig varieties — popular garden figs like the Celeste and Panache — but his real prizes are those trees found during his walks and drives through the ethnic neighborhoods of Bethlehem. Here, Greek, Syrian, Portuguese and Italian immigrants have populated their new homelands with favorite figs brought from the old country.

Duplicating a fig tree is pretty easy: Just cut a branch tip from the desired tree, plant it in the ground, and let it grow. The new tree is a clone of the original. By this basic horticulture method, figs from the Azores, Madeira, Iraq, Turkey and Lebanon have found their way to America, and beyond. 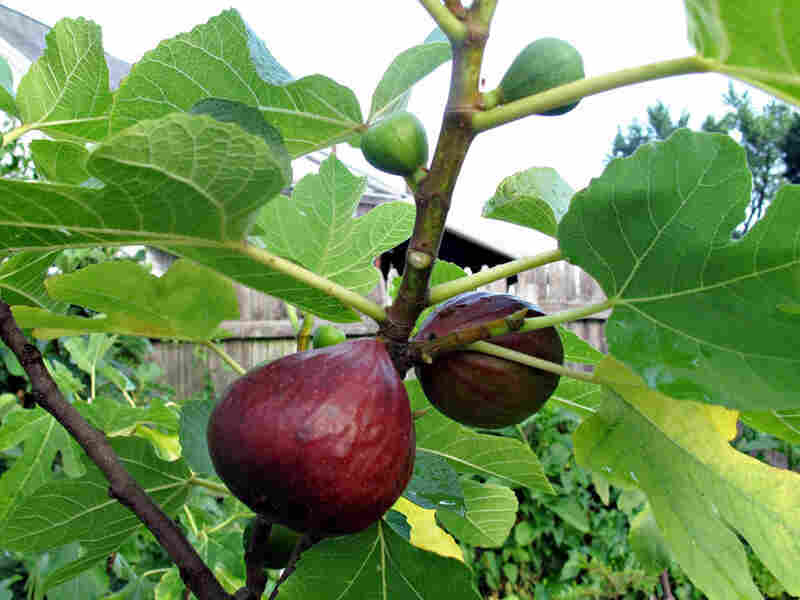 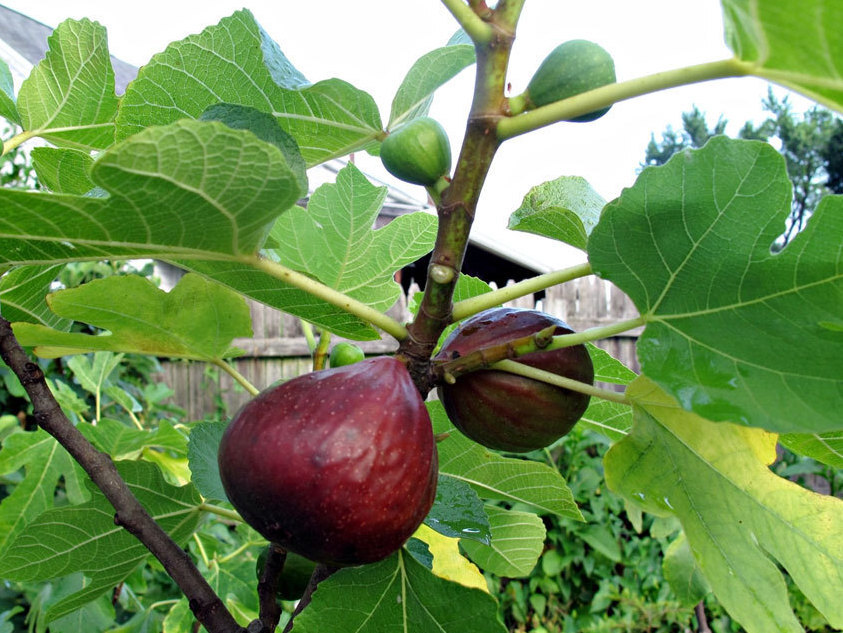 One of Bassem Samaan's Pan e Vino fig trees, propagated from the yard of an Italian restaurant in Bethlehem, Pa.

Samaan's beloved "Dark Portuguese" fig is one he named after collecting it in a local Portuguese neighborhood several years ago. Samaan believes the fig came from a village tree somewhere in the Serra Estrella, Portugal's central mountain range, more than 50 years ago. No wonder he loves it — its brilliant red flesh is sweet and rich and so soft and sappy that it melts in the mouth.

Two other varieties, which Samaan calls the Pan e Vino figs, came from the garden of a neighborhood Italian restaurant, where he first saw the trees growing in 2006. Shortly after Samaan acquired cuttings of the trees, which the restaurant's owner had brought from Sicily, the restaurant was sold, the property overhauled and the trees cut down. Samaan believes he may have saved these varieties from disappearing.

Samaan isn't the only gardener on a mission to preserve the fig. Jon Verdick has a collection of 800 varieties and counting in San Diego — part of a preservation project called Figs4Fun that Verdick hopes will eventually include 3,000 varieties.

And in Ontario, Azores transplant Adriano Ferreira has assembled a collection of more than 200 cold-tolerant fig varieties. On the island of Majorca, off the coast of Spain, there lives still another collector named Montserrat Pons i Boscana with about 1,000 figs native to the Balearic Islands.

The U.S. government also takes a hand in preserving old varieties of fruit trees. At the Wolfskill Experimental Orchard, near Sacramento, more than 10,000 varieties of tree fruits grow in a collection jointly operated by the Department of Agriculture geneticists and the U.C. Davis horticulture program. The Wolfskill fig plot includes about 300 varieties, with two trees of each. Many have been acquired by USDA collectors during expeditions to Azerbaijan and the Republic of Georgia.

Samaan has donated several of his favorites to the collection, including the Pan e Vino figs and the Dark Portuguese, to better assure that they will never disappear.

But Samaan believes that still more treasures exist in the ethnic neighborhoods of many major cities in America — and he fears that many will be lost to the zeal of new homeowners and their tree-chopping ways.

"A tree that someone cuts down might be the last of that variety," Samaan says. "And then we'll never even know what we lost."