Accessibility links
Willing To Play The Dating Game With Your Food? Try A Grocery Auction : The Salt Grocery auctions find eager buyers for food that is discontinued, seasonal or near its sell-by date. The food is generally still good after its sell-by date, and these auctions may be one answer to America's growing food waste problem. 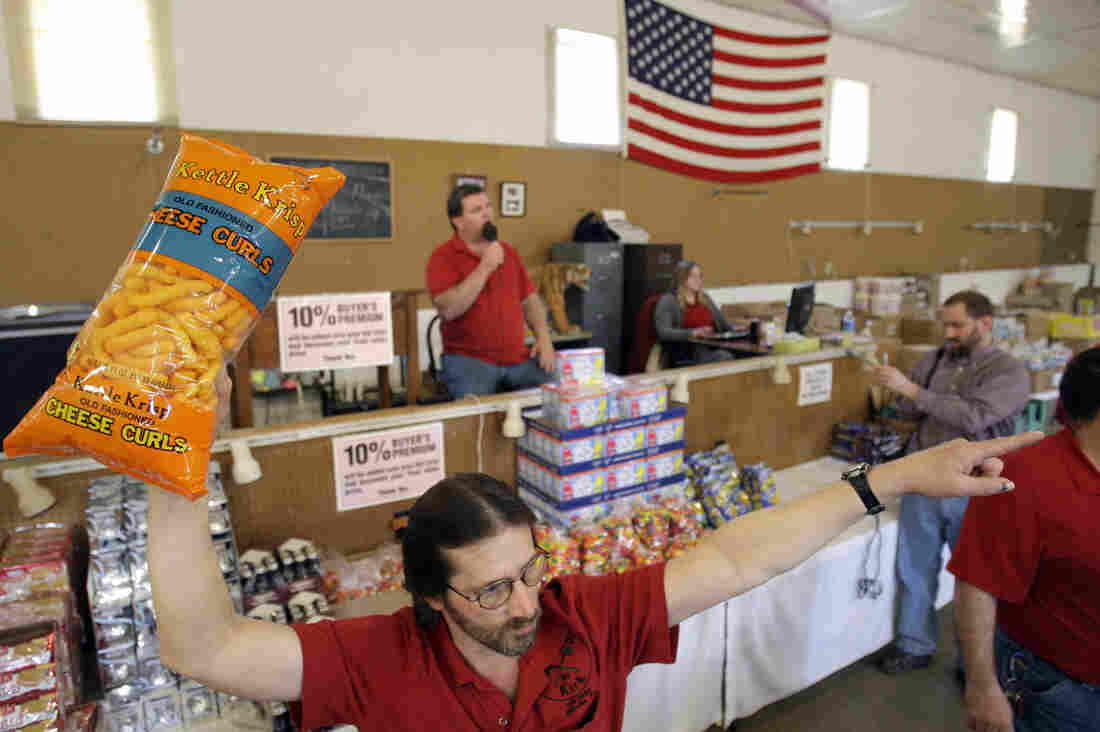 Runner Tom Howard holds up the merchandise at a grocery auction in Dallas, Pa., in 2009. These auctions are becoming more popular as people look for deals on food that's past its prime. Matt Rourke/AP hide caption 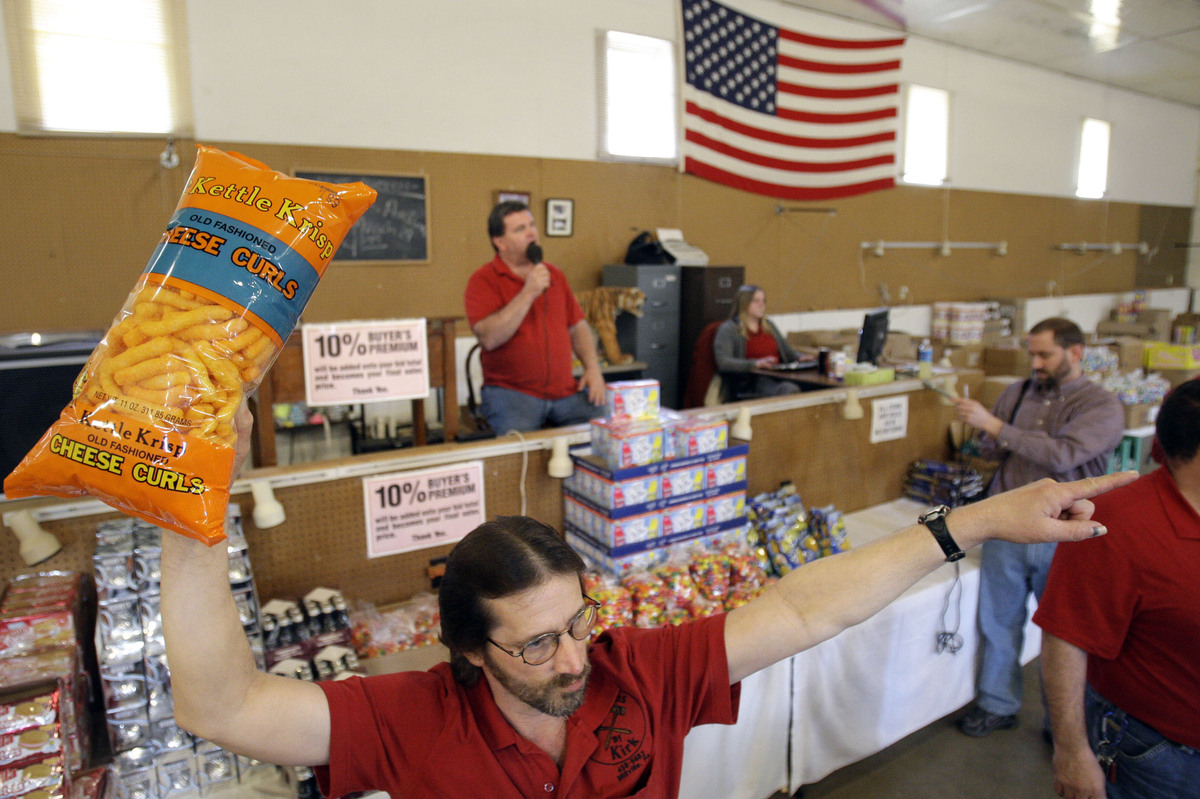 Runner Tom Howard holds up the merchandise at a grocery auction in Dallas, Pa., in 2009. These auctions are becoming more popular as people look for deals on food that's past its prime.

Every year, U.S. grocers discard $10 billion to $15 billion in unsold products. The items might be damaged, discontinued, seasonal or food that's just close to its sell-by date.

Some of those products might be sent to a landfill, contributing to the massive food waste problem. Some go to a food bank or even get delivered to shelters, as with this company in Boulder, Colo. But increasingly, they might also be resold to the public. Grocery auctions are joining salvage grocery and dollar stores as a popular clearinghouse for food that's past its prime.

On one summer Saturday afternoon, around 80 people have filled the folding the chairs at the Chesapeake Auction House in St. Leonard, Md. Grocery auctions have been growing in popularity since the recession as a way to get a lot of food for not a lot of money. Today, bidders have come for deals like frozen chicken at just over $1 per pound, blueberry granola for $1.50 and a large bag of chips for $1.50.

Dave Ring and his wife, Mary, live nearby and are veterans of the grocery auction. It's become a fun weekend outing for the two of them.

"We've been coming to the food auctions for who knows how long," Dave says. "Get what we want; sometimes we get too much."

The Rings and other attendees have come prepared with huge coolers, insulated bags and boxes to bring home their haul. Some are buying for big families and — in at least one case — home economics classrooms.

This auction and others like it are organized by people who make their living buying up food and other products from stores and warehouses that are trying to unload it, quickly. But the exact details of where it all comes from is sort of a trade secret.

'We've Lost Some Of Our Food Knowledge'

It's not illegal to sell most expired food, but many Americans are pretty attached to sell-by and best-by dates.

Jonathan Bloom, author of a book on food waste called American Wasteland, says many people have grown to fear those expiration dates.

"I think we've lost some of our food knowledge," Bloom says. "And we're not sure when something is good or not."

He says the USDA encourages manufacturers to put expiration dates on meat and dairy products, but that's only to indicate quality, not safety. The dates are only required on infant formula.

But somewhere along the line, Bloom says, expiration dates became a strict cutoff point for some consumers. "Simply following those expiration dates is something that many Americans just do because it's clear to them and it's easy," he says.

Bloom says there are consequences to that kind of thinking. In the store, it means food gets pulled off the shelf well before its labeled end date. A supermarket doesn't want you to be horrified when you purchase nearly expired crackers. It wants you to keep coming back.

"They know if they can get people to buy their food for the course of their shopping life, that's infinitely more valuable than one package of food," he says.

Grocery manufacturers like expiration dates for the same reason. Until a few years ago, some of them used Julian dating on their products, where an expiration date appeared as a long number. You could figure out the shelf life of something if you knew the formula, but it wasn't immediately obvious.

But in 2004, the world's largest retailer, Wal-Mart, said it wanted those dates clear and upfront. Many manufacturers had to change their coding system.

Rutgers University professor Dale Rogers studies supply chains. He says when manufacturers made that change, they seized the opportunity to shorten the shelf life of some shelf-stable foods for marketing reasons.

"Vinegar had seven years of shelf life because, what does vinegar turn into? It turns into vinegar," Rogers says.

To make it appear fresher, he says they cut its shelf life down to a single year.

"They don't believe that consumers really want to buy a product that is five or six years old," he says. "Before the open-code dating, there's a likelihood that consumers did buy vinegar that was more than a year old."

Dave Ring, the grocery auction veteran, says he doesn't put too much stock in sell-by dates. In fact, he had no hesitation before diving into some yogurt he'd just purchased at the auction.

"I can tell you, we've been coming a long time; I've never gotten anything bad," Ring says.

There might be minor changes in the taste, texture or appearance of expired foods. But eating yogurt that expired at midnight probably won't hurt you. Ring didn't even know how old his was.

If the grocery auction trend continues, it may be only a matter of time before you can shop for the same sort of food online. In the United Kingdom, there's a website, Approved Food, for just that purpose.

"Right now our most popular product is a Cadbury's Creme Egg," says Dan Cluderay, who runs the site. "We actually just bought like, over a million eggs."

In two weeks, he had sold 300,000 of them. If you're still not convinced that the food is any good, check out the video below. Last year, Cluderay's company appeared on the BBC show Food Fighters. The host took some samples to people on the street, who tested Cluderay's food against fresher versions of the same product. Most people had trouble discerning any differences between the old and new ones.

A chemist also tested the samples for bacteria count and type. The result? There was nothing scary in the old food.

As his business grows, Cluderay says he is thinking about trying to translate his model to the U.S. market. He says he's confident there will always be a price point at which no one can turn down a Cadbury egg.