Accessibility links
In India, 100-Year-Old Lunch Delivery Service Goes Modern : The Salt If you work in an office in India, lunch might travel through a complex network of kitchens, bicycle deliverymen and train stations before ending up on your desk. Dabba wallahs have been delivering meals for a century, but over the years, lunchbox fare has changed dramatically. 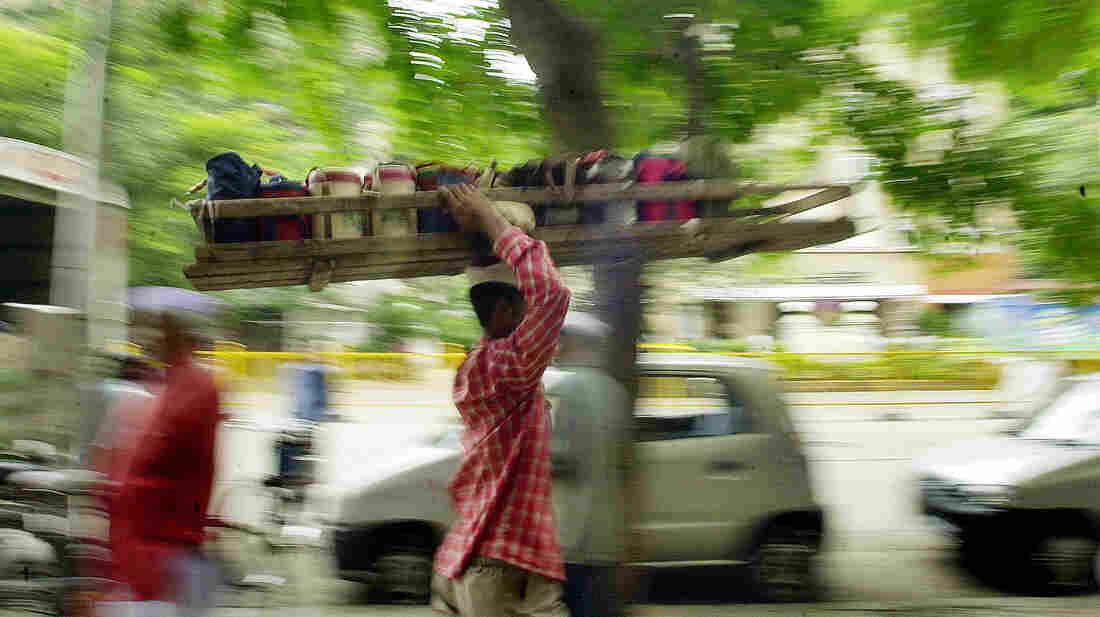 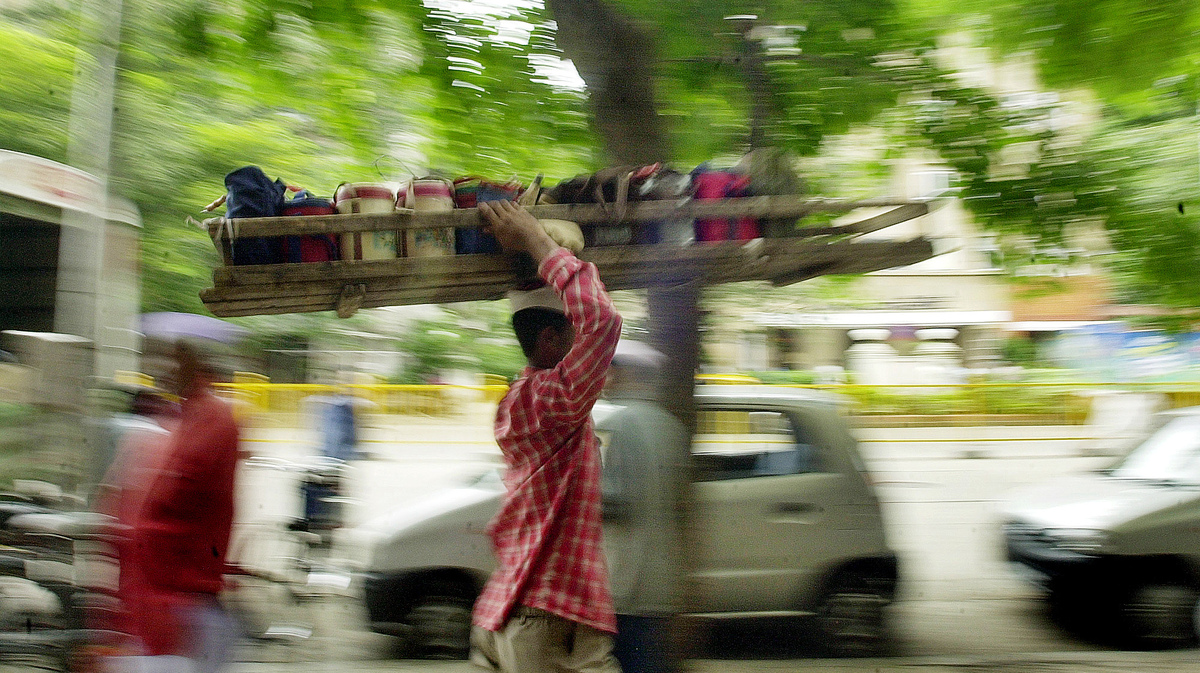 Dabba wallahs carry lunchboxes to offices in Indian cities. But the old tradition is changing with modern times.

Every day in Mumbai, some 5,000 deliverymen called dabba wallahs hand deliver 200,000 hot meals to doorsteps across the city. It's an intricate network that requires precise timing and numerous handoffs from courier to courier. The century-old service is a staple for the city's office workers. (See how it works in this video.) But as the city has changed, so too has the service.

For decades, Indian workers have had their lunches delivered, but usually from home kitchens. The prices were cheap and the food was traditional Indian fare. But that's changing.

"This is our main kitchen. ... This guy is making the South Indian menu. He's making a beetroot dosa ... then the other guy's making an egg white omelet over here," says Nityanand Shetty, head chef at Calorie Care, a high-end, health-obsessed delivery joint.

"It's a new trend that's been started. ... It's a traditional dabba wallah but at a premium kind of a thing, where the customer is conscious about what he's eating, he's not bothered about what price he's paying," Shetty says. "So, the delivery chain remains the same, but the food, where it is coming from has changed."

Cooking these meals is quite a complicated process, and Shetty says the kitchen has to start cooking at 11 p.m. With hundreds of different meals, all with specific calorie counts, Calorie Care relies on software to keep everything straight. Once the food is prepared and ready, it can finally be packed up in plastic wrap, at around 3 a.m., he says. 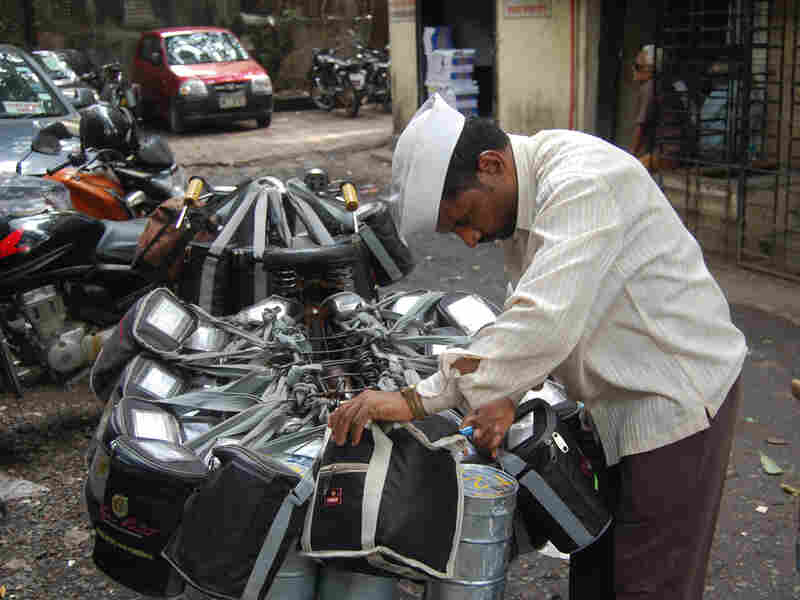 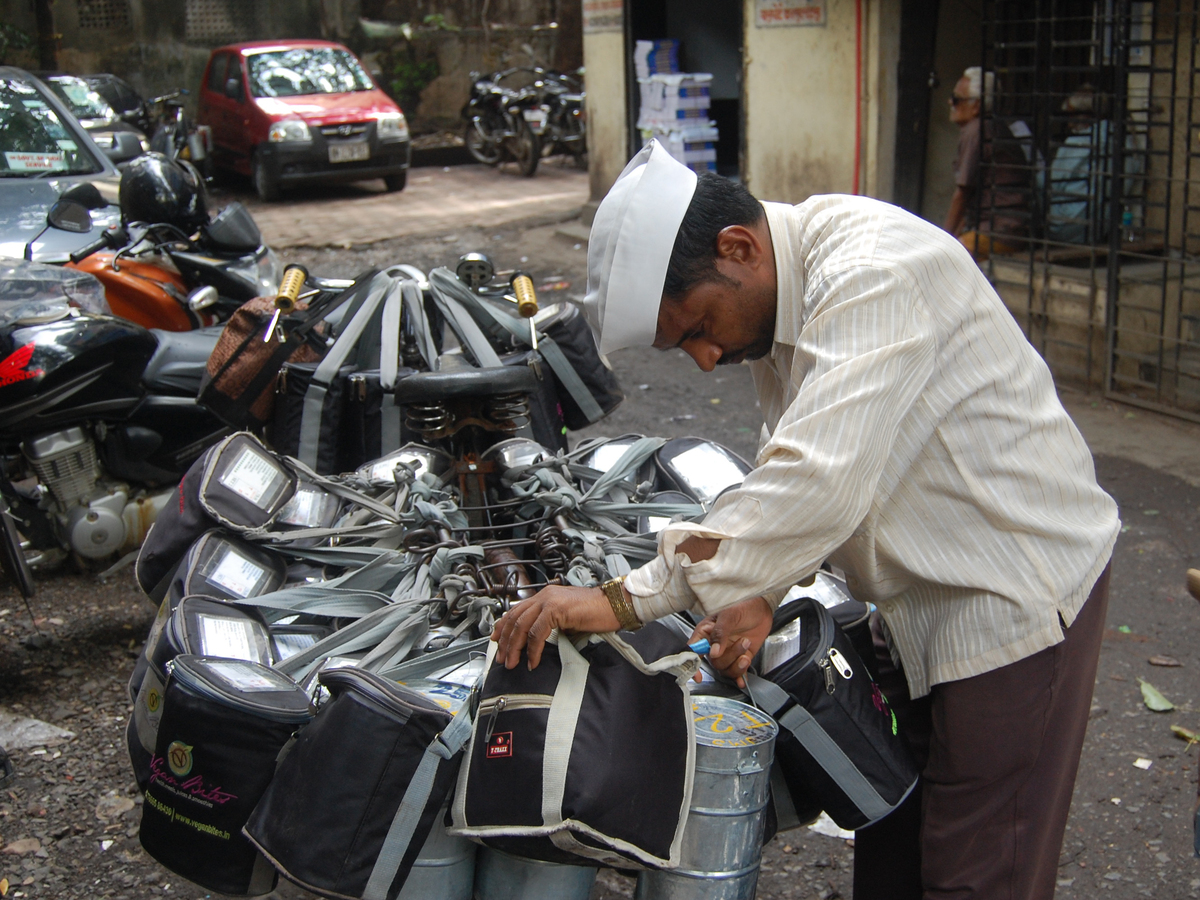 A dabba wallah checks his packages before delivering hot meals to office workers in Mumbai.

And after a night of cooking and a morning of packing, each meal is put into a small metal canister, or tiffin, in time for the dabba wallah's pickup. "When he comes at 9, everything has to be ready for him ... because they are on a very tight schedule," Shetty says. "The dabba wallahs have a huge network ... that's the whole reason why we still use dabba wallahs. And they are very effective."

Right on time, Kishan Palvar arrives for the pickup from Calorie Care. He's one of 5,000 dabba wallah deliverymen who ferry some 200,000 lunches to offices across the city. It works a lot like Takeout Taxi. The couriers make 500 rupees, or about $10, per person for a month of deliveries.

Palvar picks up several dozen lunches here. To make sure each lunch pail ends up at the right place, each container has a hieroglyphic-like coding system painted on the lid that Palvar checks before he scoops up his cargo and heads outside to load up.

He clips the containers to the handlebars of his bicycle and starts his 45-minute cycle to the train station. On the jammed platform, three dabba wallahs haul trays the size of dinner tables from the doorway of a commuter train.

From here, some of the lunches are transferred to other trains to go to different parts of the city. Lunches can be transferred three or four times before finally ending up on desktops of customers like Arif Bandukwalah, who sits in a back office of a packaging plant waiting for his vegetarian entree.

He says he likes the food because it's personalized for him — less salty — he says.

Before he leaves, the delivery man collects yesterday's container and the process starts all over again for tomorrow.