Accessibility links
Introducing Microgreens: Younger, And Maybe More Nutritious, Vegetables : The Salt Researchers have conducted the first scientific analysis of nutrients in trendy seedlings known as microgreens. They found that most microgreens have higher levels of nutrients than their mature counterparts. 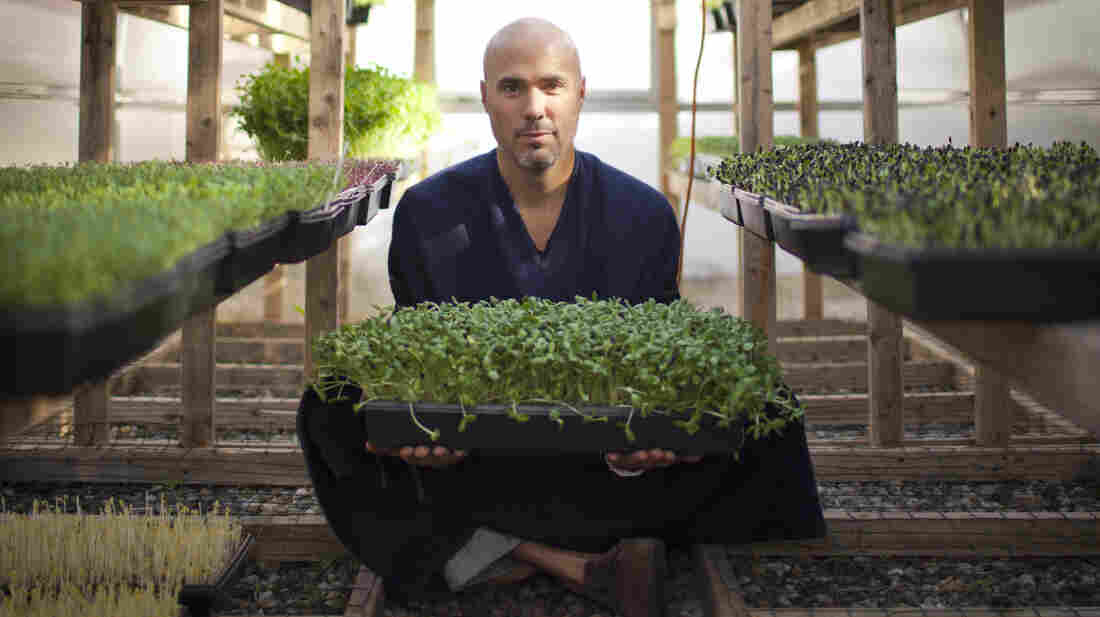 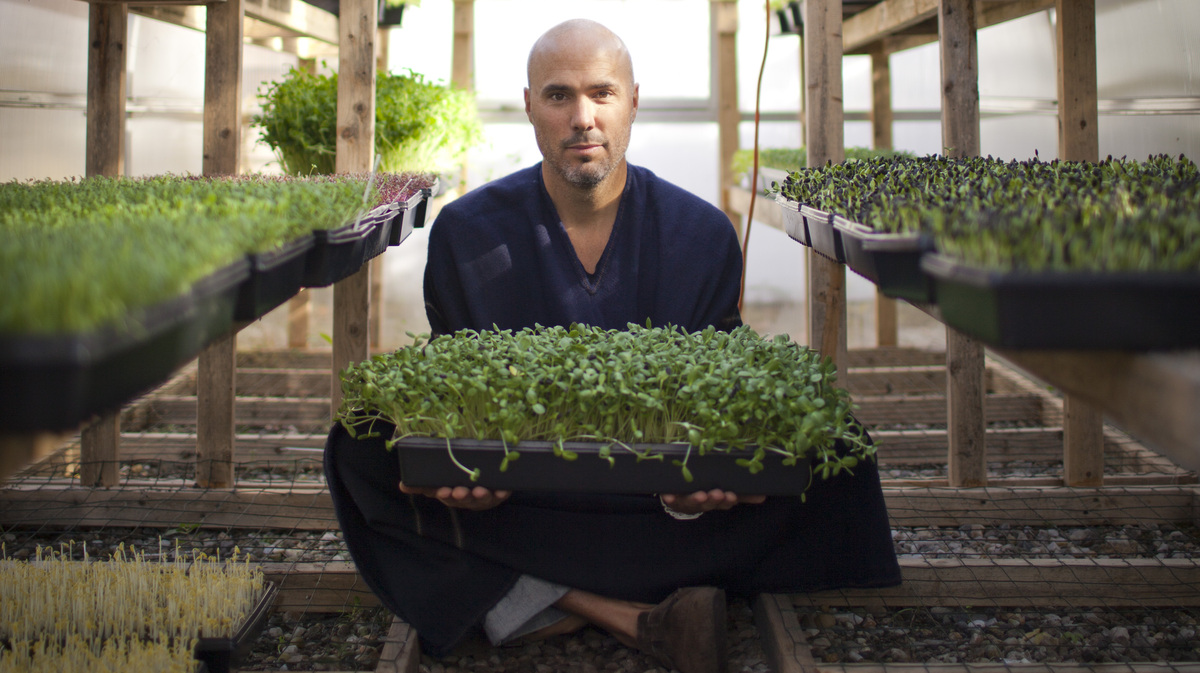 Brendan Davison grows 11 kinds of microgreens, including arugula and basil, at his Good Water Farms in East Hampton, N.Y.

We've come to accept the baby-fication of our vegetables – baby spinach, baby lettuce, and baby squash prized for their tenderness and cute size have staked out territory in the produce section of many a grocery store.

Now, growers (and a few inventive chefs) have decided we need vegetables that are even more juvenile than babies — seedlings so small, and so young, they're called microgreens. The advantages of these tiny leaves less than 14 days old are many, their proponents say. They make vibrantly hued garnishes to salads, sandwiches and soups. And whether they're spinach, pea, beet or purple mustard, microgreens are rumored to pack even more nutrients that their adult versions.

Now it seems there's some scientific muster to back that claim. Gene Lester, a researcher with the U.S. Department of Agriculture, and his colleagues at University of Maryland, College Park, have conducted the first scientific analysis of nutrients in microgreens. The results, Lester tells The Salt, "totally knocked me over."

The researchers looked at four groups of vitamins and other phytochemicals – including vitamin C, vitamin E, and beta carotene — in 25 varieties of microgreens. They found that leaves from almost all of the microgreens had four to six times more nutrients than the mature leaves of the same plant. But there was variation among them – red cabbage was highest in vitamin C, for instance, while the green daikon radish microgreens had the most vitamin E. 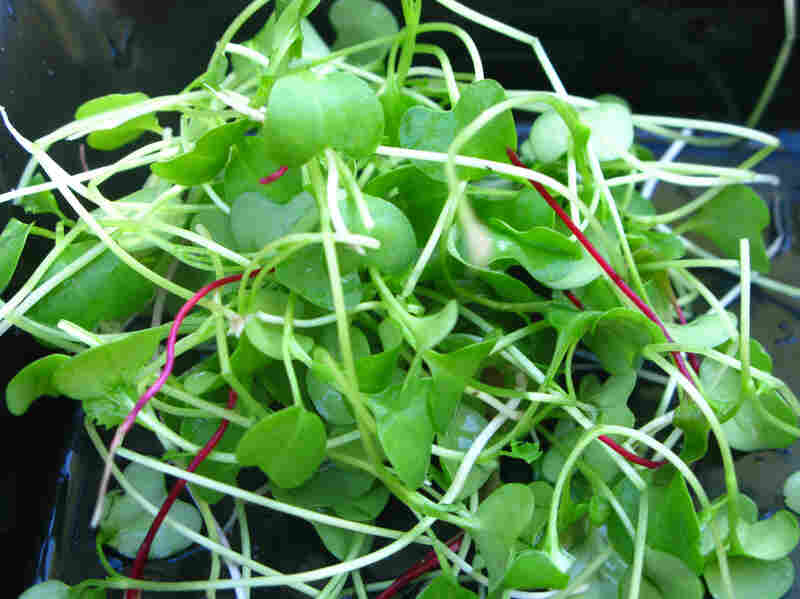 The findings, which appear in the Journal of Agricultural and Food Chemistry, "give us a new insight into plants, because these are little tiny seeds barely exposed to much light at all," Lester says. "And yet those compounds are there ready to go."

Bhimu Patil, a professor of horticulture and director of the Vegetable and Fruit Improvement Center at Texas A&M University, agrees that microgreens may potentially have higher levels of nutrients than mature vegetables. But he says more studies are needed to compare the two side by side. "This is a very good start, but there can be a lot of variation in nutrients depending on where you grow it, when you harvest, and the soil medium," Patil says.

Growers say there's already a market. Brendan Davison recently started up Good Water Farms to cultivate organic microgreens in East Hampton, N.Y. Davison says he always suspected microgreens were exceptionally nutritious, and has doubled his sales since he started selling to chefs in the Hamptons one year ago.

"I deliver the greens in the tray that they're grown in, so I'm bringing the farm to the kitchen," says Davison. "The chefs can cut what they want with scissors right onto the plate, so they're live and fresh."

Davison currently grows in his greenhouse 11 kinds of microgreens, including daikon radish, arugula, cilantro, and basil.

Davison and Lester say microgreens could easily be confused with sprouts, but they're not the same thing. Sprouts are seeds germinated in water just long enough (usually 48 hours) to grow roots, a stem and pale, underdeveloped leaves. Microgreens, on the other hand, need soil and sunlight and at least 7 days to grow before you can harvest them.

This distinction is important for food safety, since sprouts have recently been implicated in a number foodborne illness outbreaks, like the one in Germany and France where more than 50 people died and thousands were sickened after eating fenugreek sprouts contaminated with E. Coli 0104. As Nancy Shute reported earlier this year, the U.S. government now recommends against eating sprouts.

Patil says microgreens could also harbor menacing bacteria, depending on how carefully they're packaged. "We're going to have to make sure this is safe," he says.

But everyone seems to be in agreement that anything that gets more phytonutrients into people is a good thing, given that most Americans aren't eating enough fruits and vegetables.

"Microgreens aren't going to replace a big, leafy salad that has lots of fiber and will give you a good sense of satiety," says Lester. "But if you throw a big bunch of microgreens on anything, that's a pretty good shot of vitamins."