Accessibility links
Farmers Use YouTube To Share Devastating Impacts Of Drought : The Salt Farmers are uploading videos to YouTube that offer an intimate perspective of the unfolding drought. Some say rising food prices are already hurting local businesses in their communities. 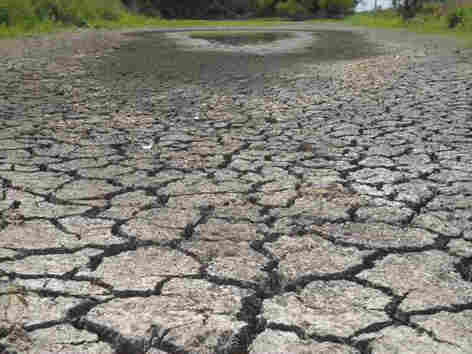 A YouTube user who goes by Katzcradul posted this image of a parched gulch on her drought-stricken land in Missouri on the site. YouTube hide caption

As we told you last week, farmers are using Twitter more than ever to keep tabs on each other and to commiserate over their drought-afflicted crops this summer.

So it should come as no surprise that plenty of farmers are also active on YouTube, disseminating intimate views of what's happening in farm country.

Of course, there are the now world-famous Peterson brothers of Kansas, whose June video "I'm Farming and I Grow It" was a runaway sensation, with almost 7 million pageviews.

But farmers elsewhere are touching on more serious themes: what the drought looks like and how it's impacting their livelihoods. Which is handy for those of us in coastal cities struggling to wrap our heads around the protracted absence of rain in the Midwest.

Take a young farmer, going by Jack Squat Digger, who posted footage of his cornfields and pasture in east-central Indiana. In a July video, he describes his cornfields as "waist-high, tossled, rolled-up, pathetic, bad-looking."

But Jack acknowledges other farmers whose fields he has seen have it worse. "I'm going to get a little out of the field — better than a lot of guys are going to get," he says. An update in mid-August shows that his corn has matured some, but isn't nearly what he'd hoped for or expected.

KatzCradle, another active YouTube user, has made videos using still images of her community in Missouri, which she says she was inspired to share after seeing similar images from another farmer in Iowa.

She reports in a dispatch from Aug. 19 that it's so quiet around her home because the corn driers aren't running — there's no corn for them to dry. Her own crop of corn is so poor, she says, most of it is just going to have to be plowed under.

She's also alarmed that many of the shelves in her local grocery store are empty and that a local restaurant has had to close.

"The crisis of the drought and rising food prices are not just something I read about in the news," says Kat. "They have come to my town and are impacting my life even as I make this video."