Accessibility links
Battle Over Michigan's New Swine Rules Goes Hog Wild : The Salt Michigan officials and pig farmers are locked in an escalating debate over new rules that make wild boars illegal in the state. The state maintains that the animals can destroy natural ecosystems, but some farmers say that the rules will destroy their livelihoods. 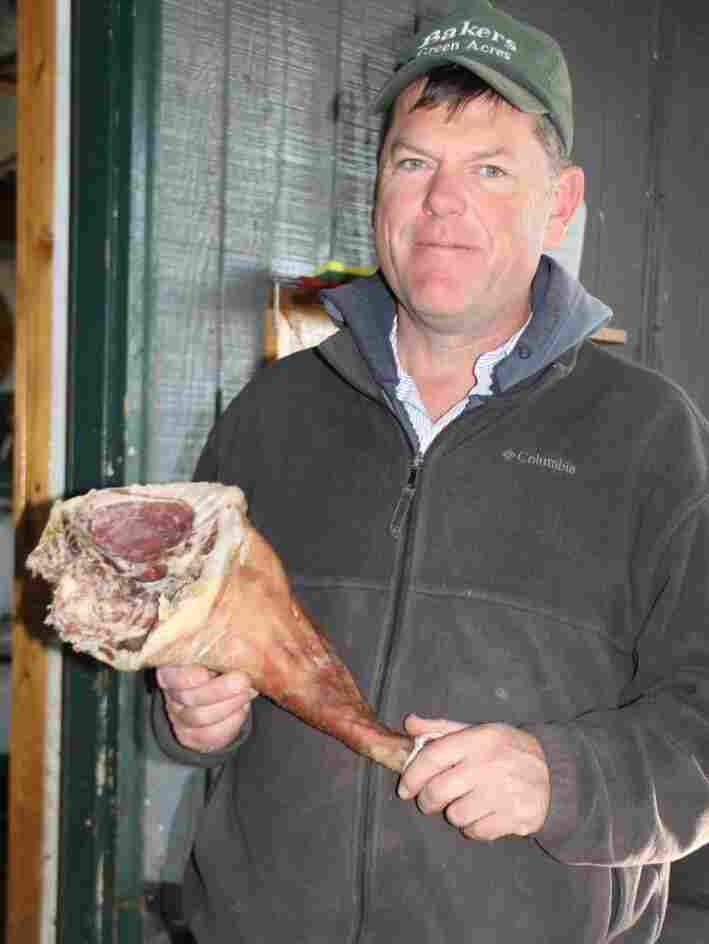 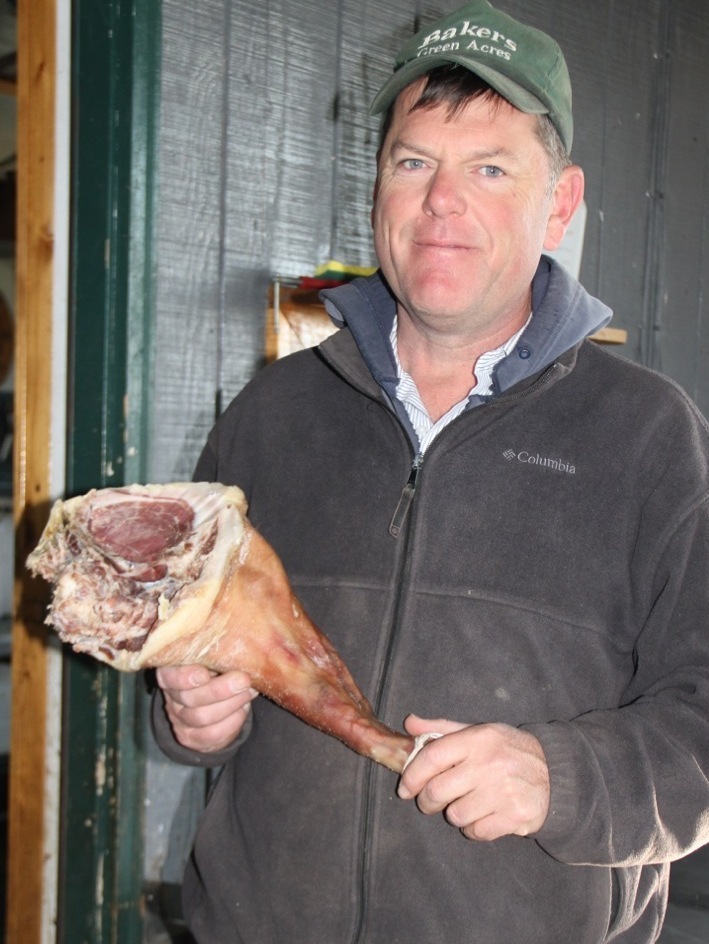 It's estimated that as many as 3,000 wild pigs are on the loose in Michigan. Nationwide, they cause more than $1.8 billion in damage to farms each year. So recently, the state's Department of Natural Resources put Russian boar on the state's invasive species list.

Mark Baker left the military eight years ago to start Baker's Green Acres, a small farm in Marion, Mich., with his wife and kids. Since then, he's put a whole lot of love, money and time into developing tasty charcuterie: salted and cured pork, derived from his hybrids of Russian boar and the heritage breed Mangalitsa.

"My chefs love it," Baker says. "They like the dark red meat, the woody flavor and the glistening fat."

At the moment, Baker is the only farmer raising the swine for human consumption who freely admits he has them.

But with Michigan's new order, Baker's herd was suddenly classified as an illegal invasive species — putting him at risk of up to two years in jail and $20,000 in fines. If Baker complies, he will receive no compensation for the loss of his investment.

Ed Golder, public information officer for Michigan's DNR, says "these invasive swine are nothing more than Asian carp with legs. They will come in and devastate a natural ecosystem, and they will pose a serious threat to farms of all sorts."

Wild pig experts say Michigan officials have the right idea — trying to cut the Russian boar population before it can spiral out of control. And the agency didn't mean for the order to reach into agriculture; in fact, it specifically states it isn't intended to harm the domestic pork industry in the state.

According to the agency, there are two species of pigs: Sus scrofa, or Russian boar, which are the subject of the order; and Sus domestica — domestic pigs, the source of most bacon and ham.

But critics, including Michigan state Sen. Joe Hune, say those guidelines are overly vague. If "the tail is either curly or straight, you can be a felon for owning that hog," Hune says. 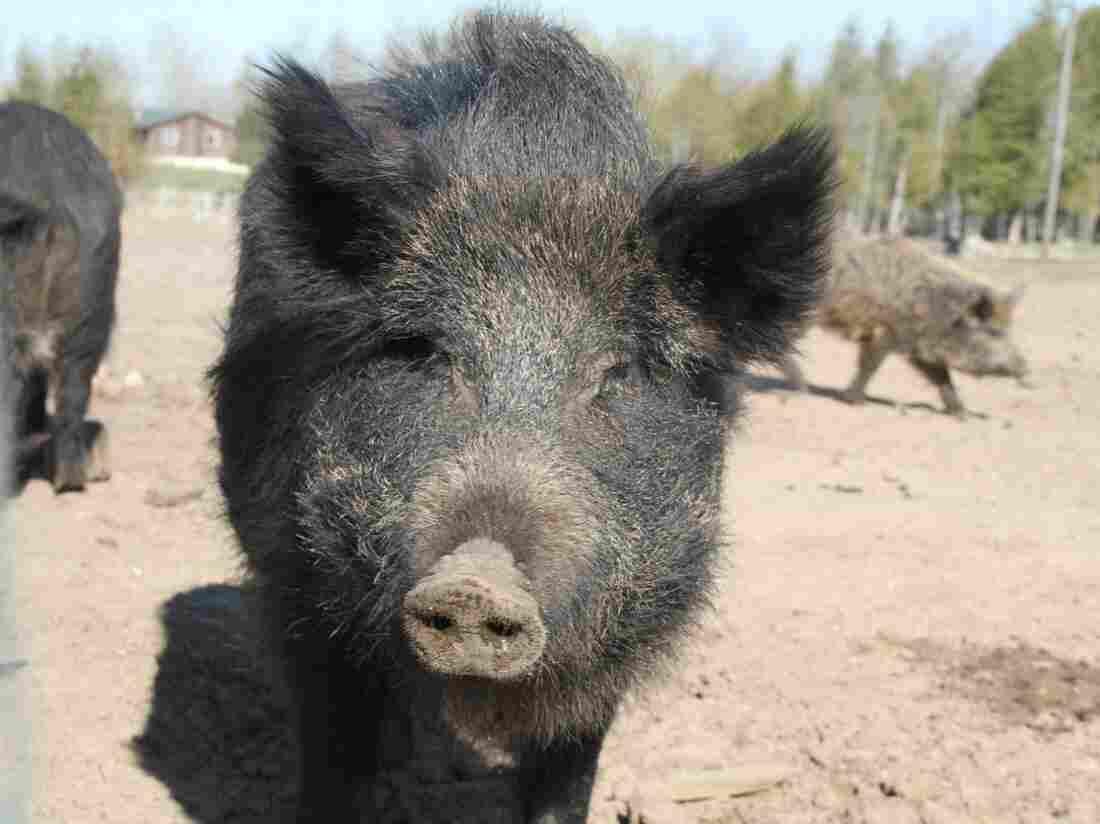 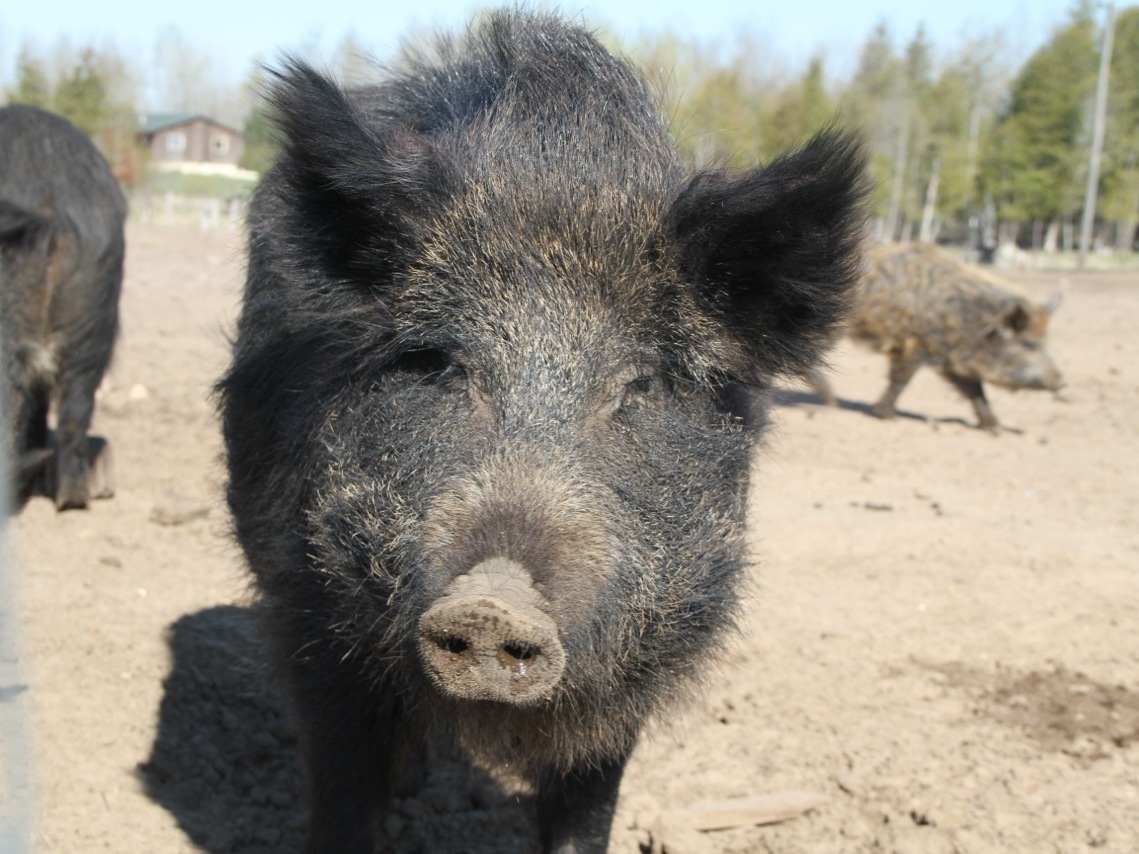 A Russian sow on Mark Baker's farm. Four other parties have joined Baker's lawsuit against the Michigan Department of Natural Resources.

Wildlife biologist Shannon Hanna, who is overseeing the agency's order, concedes that "some of the characteristics in the ruling are similar to a domestic hog breed," like light-colored underfur and striped piglets. But, she says, "it is highly unlikely that we would just pull one characteristic out of there."

The agency's use of the word "feral" in the order has also further stoked the debate.

"How can the DNR say that the pigs that are under my control, livin' in my barns — how can they say that they are feral?" asks farmer Mark Baker.

So Baker filed suit against the agency, and gathered his kids and some squirming Russian piglets to make his case in a YouTube video. Before it knew it, the DNR found itself in a massive food fight.

But the DNR says it can't comment on Baker's charges because of his lawsuit, so Baker has the stage all to himself — and now has about 100,000 hits on his video. Mike Adams, an Arizona-based conservative commentator, produced a podcast charging that "the state of Michigan is now just days away from kicking in the doors of all these farmers, shooting the pigs, and then arresting all of these farmers as felons."

"I wish there was a way to have folks feel more comfortable with this," says Hanna, "and know that we really are just looking at this Russian boar variety of swine, and not looking at the domestic breeds of swine that other folks have been worried about."

Misinformation certainly hasn't helped. Dave Tuxbury, a rancher who raised Russian boar primarily for hunting facilities, had his boar — and their piglets — killed to comply with the state's order. But a misleading version of his story, reporting that Tuxbury was forced to kill his herd in an armed raid, was spread by both social and traditional media.

DNR never conducted raids forcing farmers to kill their pigs on the spot, and has created a Web page to help combat misinformation. But, as the DNR's Shannon Hanna explains, those who raise the swine "need to, by law, abate a public nuisance. These folks can shoot their own swine, they can harvest it, use it as they want, eat it," she says.

Baker also says he never expected people to get so riled up over the issue. But, as Michigan state Sen. Darwin Booher says, "if you threaten my livelihood, you threaten feeding my family tonight — eventually something is going to happen."

The ultimate resolution to the debate may lie in court. Baker's lawsuit against the Michigan DNR has been joined with four other cases. The combined suit is just getting under way.

Ultimately, if a judge rules in Baker's favor, the Invasive Species Order could be thrown out. As many states in the South have learned the hard way, the results could be devastating. But in a food fight where a state agency is pitted against slow-cooked specialty pork shoulder, you can guess who the fan favorite is.