Accessibility links
Have Lobster, Will Travel — And Race The Clock : The Salt Flying with lobsters is surprisingly easy, as long as the journey isn't too long. And this year's glut of Maine's soft shell lobsters means it's also cheaper than usual to bring them home alive.

Have Lobster, Will Travel — And Race The Clock

Have Lobster, Will Travel — And Race The Clock 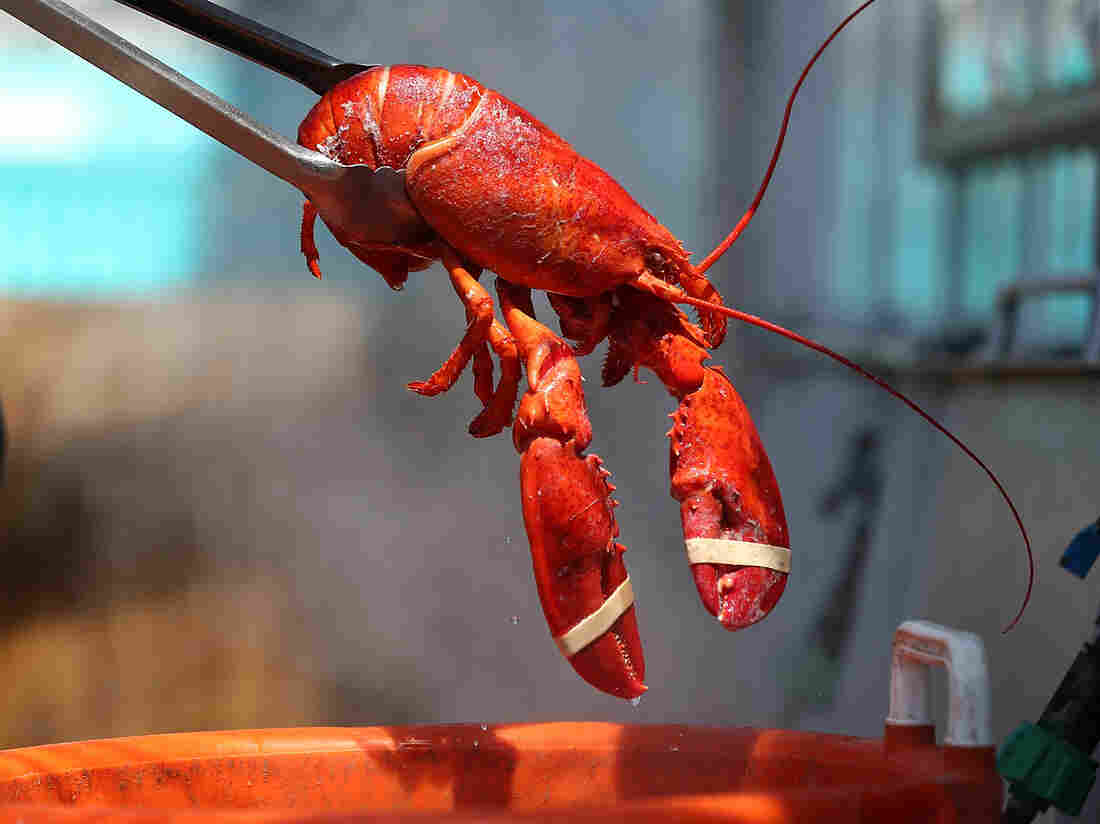 An overabundance of lobsters in Maine due to early shedding of shells has driven down prices to record lows. That's good for consumers. Justin Sullivan/Getty Images hide caption 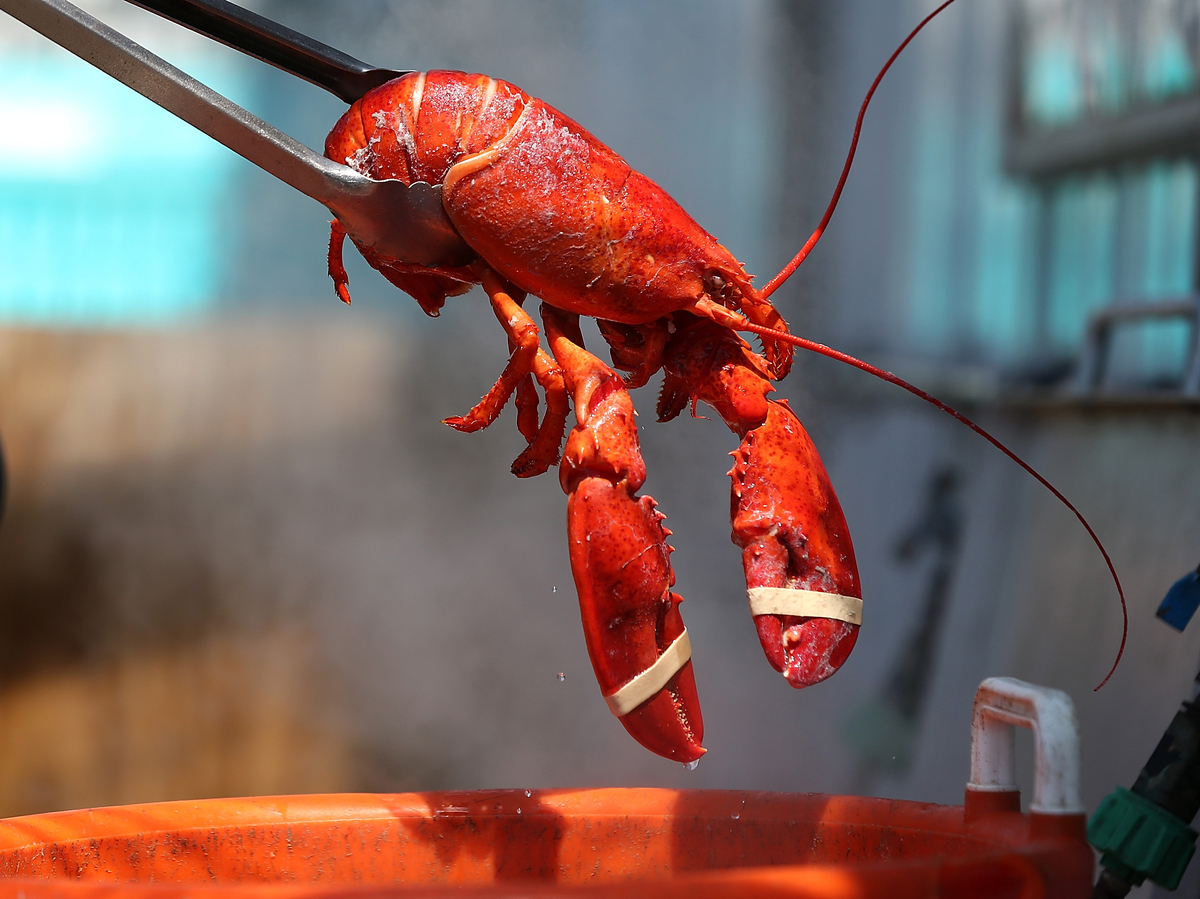 An overabundance of lobsters in Maine due to early shedding of shells has driven down prices to record lows. That's good for consumers.

This summer in Maine, I ate more lobster than at any other time I've been there – twice in one day on a couple of occasions. We lobster lovers had the glut of soft-shells, which started in June as the lobsters began to shed earlier and faster than usual, to thank for the more affordable market price of around $4 or less a pound.

On my final visit of the summer this past weekend, I decided I needed one more lobster dinner with friends back in Washington, D.C., who hadn't gotten the chance to gorge. The next best way to enjoy a fresh lobster if you can't go to Maine? Take them on the plane, I was told.

It turns out flying with live lobsters isn't so hard. But anyone who wants to try it will be racing against the clock if you want the delicate creatures to survive the journey.

Procuring travel-ready live lobsters from fish markets in Maine is easy, especially in Portland, which is home to the state's biggest airport. Harbor Fish Market, where I got mine, and dozens of others dealers along the coast, have been in the business of packing up lobsters for air, train or car travel since since the 1980s. 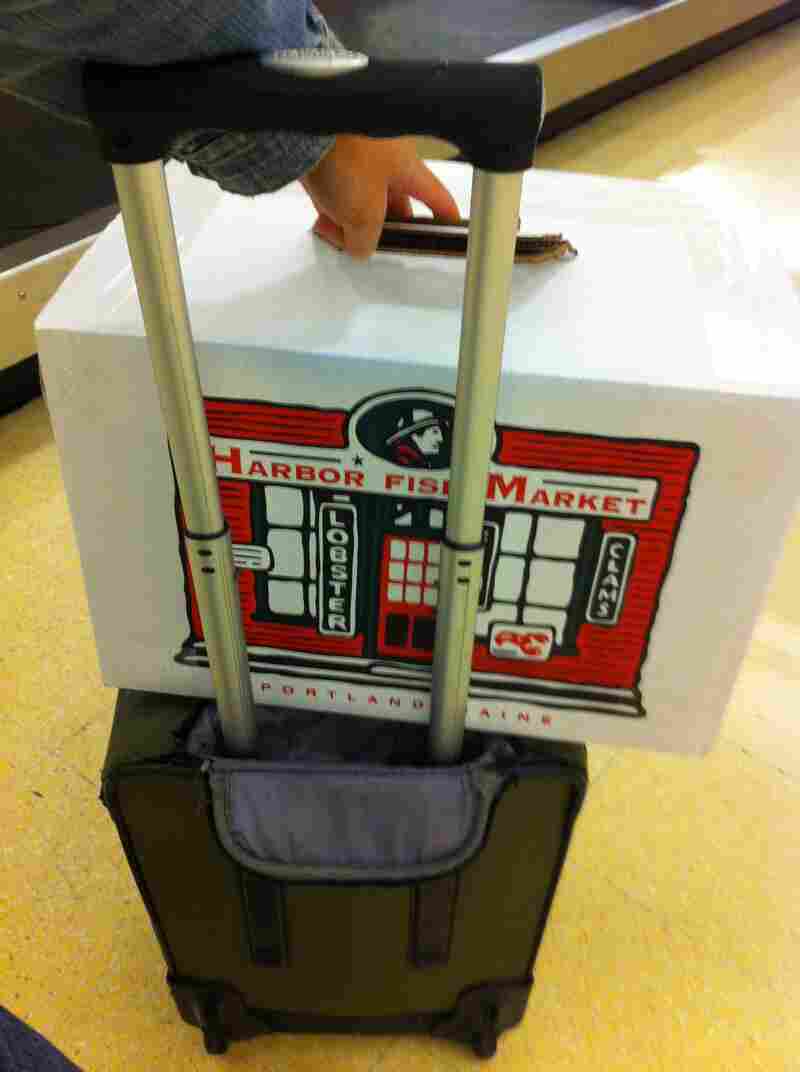 The author's lobsters, which traveled with her from Portland, Me., to Washington, D.C. Eliza Barclay/NPR hide caption

For $60, I got eight soft-shell lobsters packed and ready to roll in a cardboard box. Inside, my crustaceans were snuggled into a Styrofoam box and covered with a thick layer of seaweed ("to create a more comfortable ride," says the Harbor Fish Market website) and a frozen gelpack wrapped in wet newspaper. The goal: Keep them alive for the eight hours between pulling them out of the tank and the boiling pot of water at my destination.

Nick Alfiero, who owns Harbor Fish Market with his two brothers, says the packing method has been a hit with customers. (Harbor had to negotiate with the Transportation Security Administration in 2006 to allow the frozen gelpacks through, since the liquid inside them initially raised red flags.)

The Styrofoam-seaweed combo is used to ship hard-shell lobsters by Fed-Ex, too — the harder shells are the mark of an older, tougher, meatier lobster that can survive a 24-hour journey. Soft-shells are said to survive only 3 to 10 hours on the road.

As I lugged my box of lobsters through the Portland Jetport, I felt like I was traveling with pets, who rustled against the seaweed now and then. When I got to security, the TSA minders cracked their jokes about seizing the lobsters for their lunch. On the plane, the lobsters didn't fit under the seat or in the overhead bin, but a kind flight attendant wedged them into the staff closet in the front of the plane.

And we made it. When I got home and opened the box, all eight lobsters were still kicking. Of course, no Maine lobster dealer will guarantee the life of a lobster out of water. And Alfiero says even if they die in transit, you can still eat them as long as they're kept cold. "It's like chicken," he says. "It's a common practice for restaurants to serve lobster even if they just died. [But] a bad lobster will smell bad." Which luckily, I didn't detect.

The box is a heavy carry-on, but the briny sweetness of a fresh lobster erases any regret. And it seems we're doing Maine's economy a favor, too. As a columnist for Working Waterfront, a newspaper that covers the Maine coast, writes, "One thing we all can do is eat. More. Lobster. Buy it as locally as possible; either directly from the lobstermen or from the dealer he or she sells to."