Accessibility links
Rosh Hashana's Sacred Bread Offers Meaning In Many Shapes And Sizes : The Salt Making challah for the Jewish New Year lets the baker take a moment to reflect on life's blessings. The bread can be shaped into the traditional round, or a lion or bird to echo Bible verses or the maker's preference. 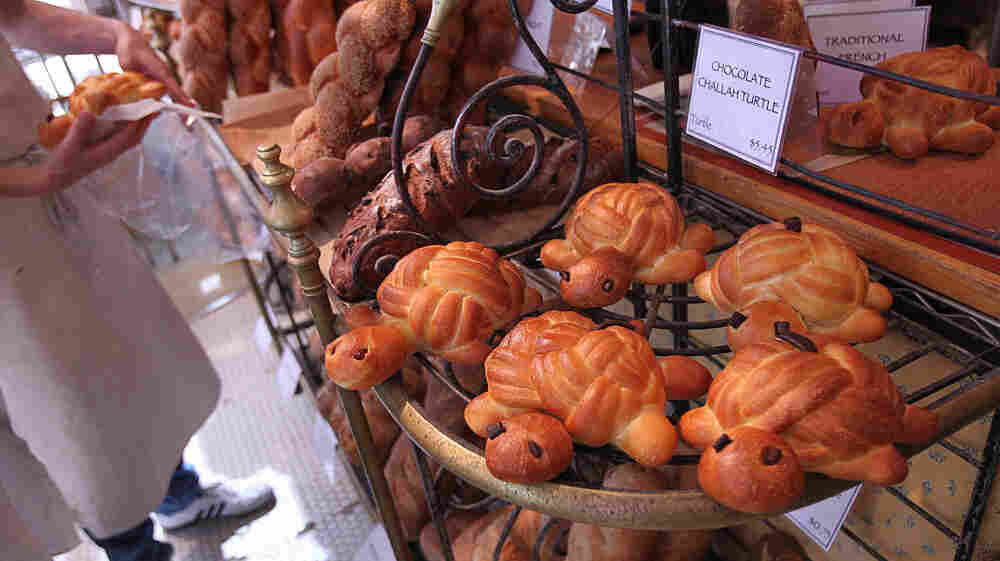 The traditional challah for the upcoming Jewish holiday, Rosh Hashana, is round. But as this bakery demonstrates, other shapes offer symbolic meanings. Suzanne Kreiter/Getty Images hide caption

Challah is a rich, eggy bread baked every week for the Jewish sabbath, or shabbat. But for Rosh Hashana, the Jewish New Year that starts tomorrow at sundown, it gets a few tweaks. There's a little extra honey or sugar, for a sweet new year. And instead of the usual long braid, it's round.

Mimi Wilhelm, who bakes challah for her family every week, teaches a challah-making class through Chabad Oregon. "The reason that we do the round challah, versus the braids, for Rosh Hashana, is because the year is round, it represents that idea. This looks like a crown, for crowning God as king on Rosh Hashana."

But crowns and braids aren't the only shapes around. Charles Levy grew up in Morocco and is now the president of Congregation Ahavath Achim, Portland's Sephardic temple, which is largely made up of Jews of non-Eastern European descent. Growing up, he saw Rosh Hashana challahs in all sorts of forms. "Some of the people in Morocco will emulate animals, like a swan, or often you'll have a head-like lion, lion of David. Or gdi, which is like a gazelle, a very fine and good-looking animal," he says.

There are also traditional challahs shaped like ladders, keys and birds. Like the round Rosh Hashana challah, many of these shapes have symbolic meaning. They echo Bible verses or represent things you want to get in the new year.

But they're also just meant to mark the holiday as something different — something special.

According to Wilhelm, using challah to mark a sacred time is actually something that happens every Friday night when Jews celebrate the end of the week and the coming day of rest with Shabbat. 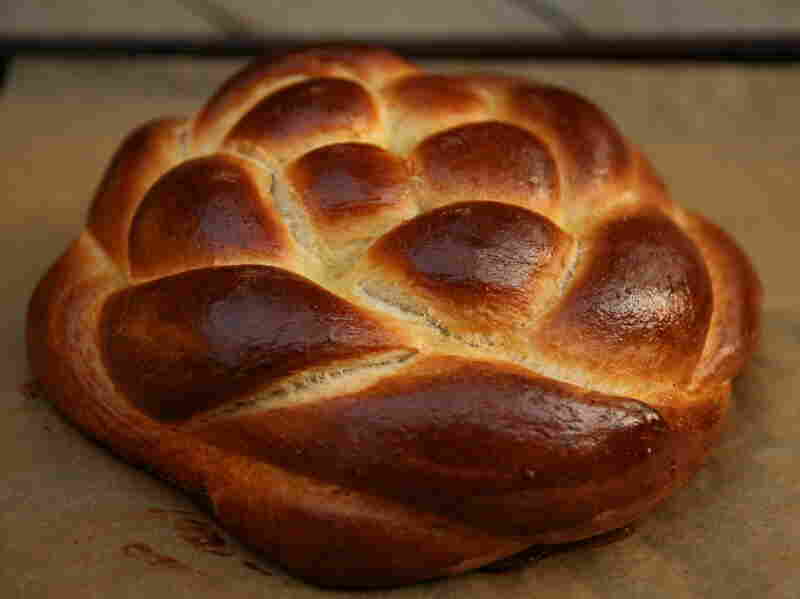 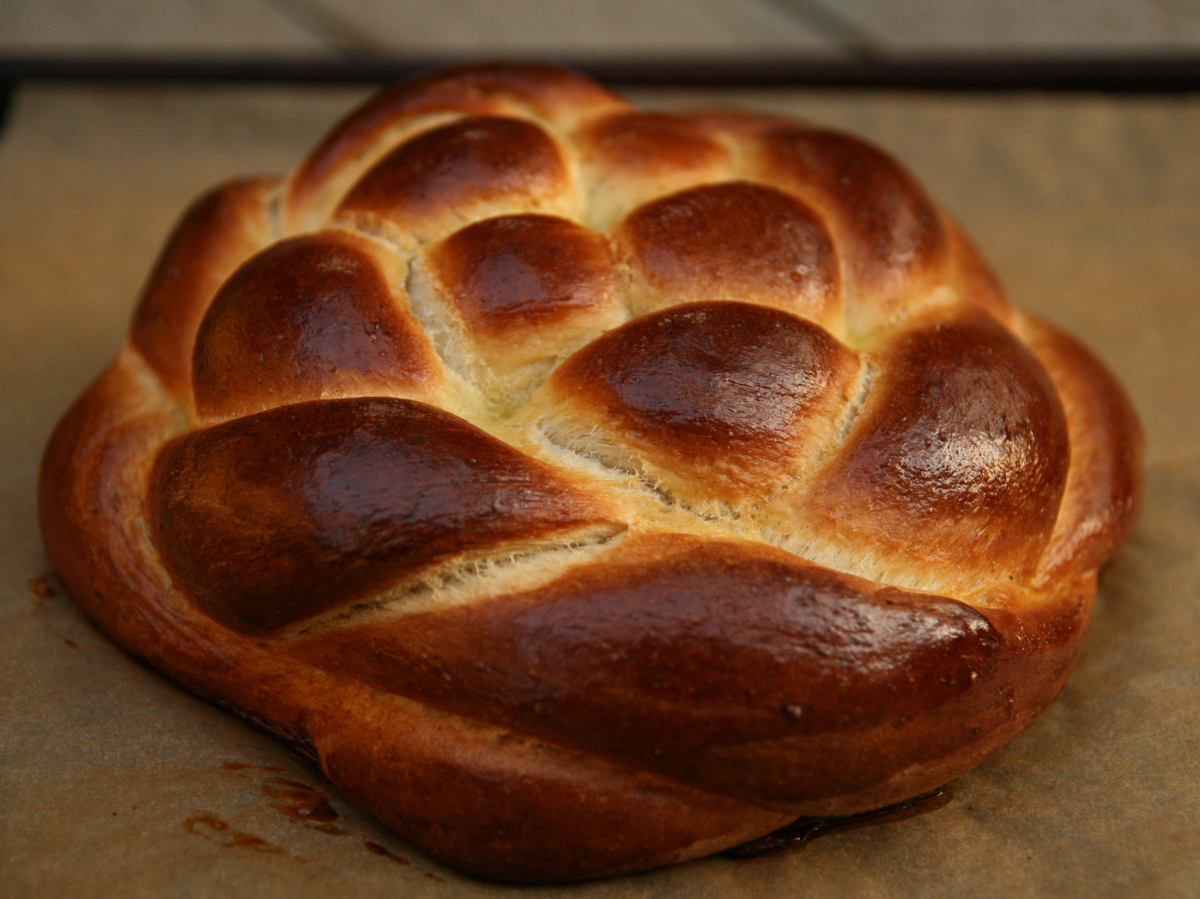 The author's braided round challah.

Although the whole loaf is called challah, Wilhelm tells her class that the word used to refer to just a small lump of dough. It would be pulled off before baking and set aside as an offering to the priest. A special blessing is said, and then you hold the lump of dough in your hand. "And then you have this special time that you can think about whatever you want to ask God," Wilhelm says.

These days, people don't bring the lump of dough to the temple; they just burn it in the oven after they've baked their bread. But the idea of taking a moment — holding the small bit of dough in your hands and reflecting — is still a part of the ritual. Willhelm says that it's especially important in our busy modern lives. "Three little children, running a preschool, I'm working all the time. ... There's not too many times in my day that I do that."

Simi Mishulovin, who helps run the challah class, is also a busy young mother. Like Wilhelm, Mishulovin uses her moment of reflection to think about blessings for her family, or friends who are sick, or just for appreciating all she has. That, she says, is a pretty profound moment to come from flour and water.

"It's actually the most mundane of foods. It's a staple. And we use a staple of our life to connect to infinite," she says.

Mishulovin says that baking challah brings blessings upon the home and helps transform the physical to the spiritual — which, she notes, is one of our main jobs in the world. And she says we can do it whether the challah is braided or shaped like a crown, whether it's a regular Friday night or the beginning of a whole new year.

Mix together the hot and cold water, then add the yeast and sugar. Stir and set aside for the yeast to bubble while you prepare your dry ingredients.

Mix dry ingredients together, then make a well in the center and add:
3 eggs
1 1/2 cups oil (Wilhelm uses a neutral oil, like vegetable)

Pour in the yeast mixture, and knead everything together until a smooth dough is formed. Cover, and let rise 1 1/2 hours, until nearly doubled (time may vary, depending upon the temperature of the room and ingredients).

When the challah has risen, turn it out and shape it into the braid or shape of your choosing, and brush gently with a glaze made from an egg beaten with a few spoonfuls of water. Let the dough rise until puffy, about 45 minutes. When the rising has almost finished, preheat the oven to 350 degrees. Give the dough another gentle brush of egg wash if you wish, then bake until fully cooked and richly browned, about 45 minutes.