Accessibility links
To Find Truly Wild Rice, Head North To Minnesota : The Salt Processed wild rice dominates grocery store shelves, but around the Great Lakes, Native Americans still harvest it the same way their ancestors did centuries ago. This weekend, the Wild Rice Festival in Rosemont, Minn., celebrates the tradition. 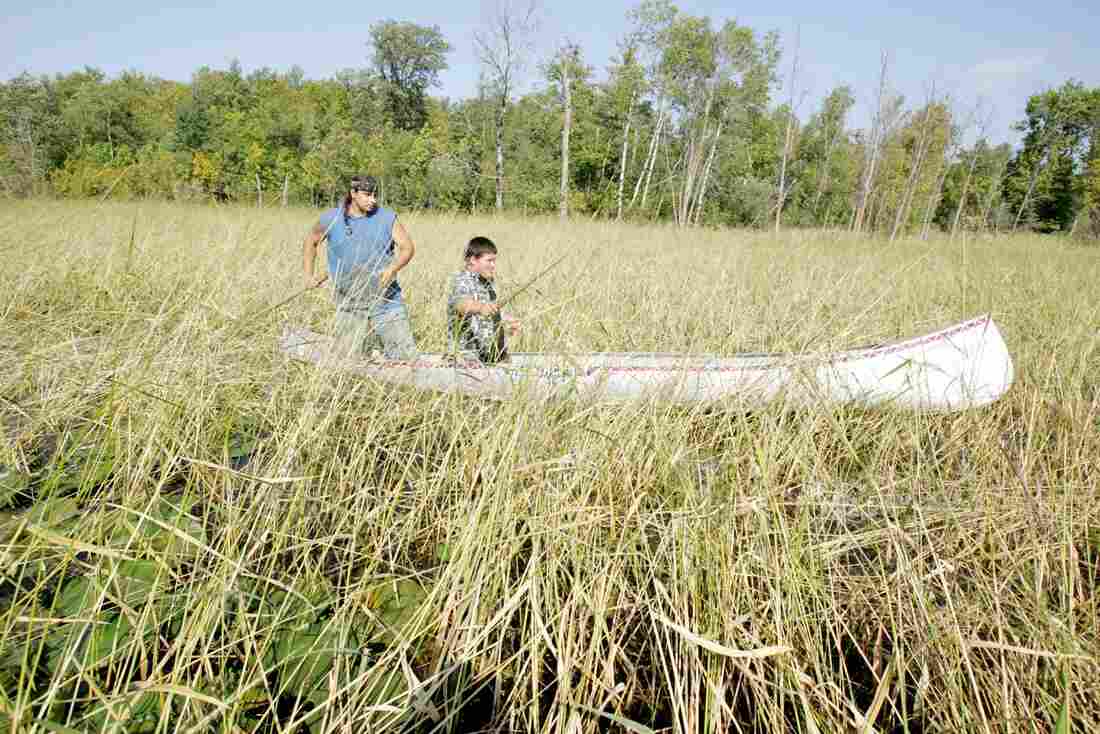 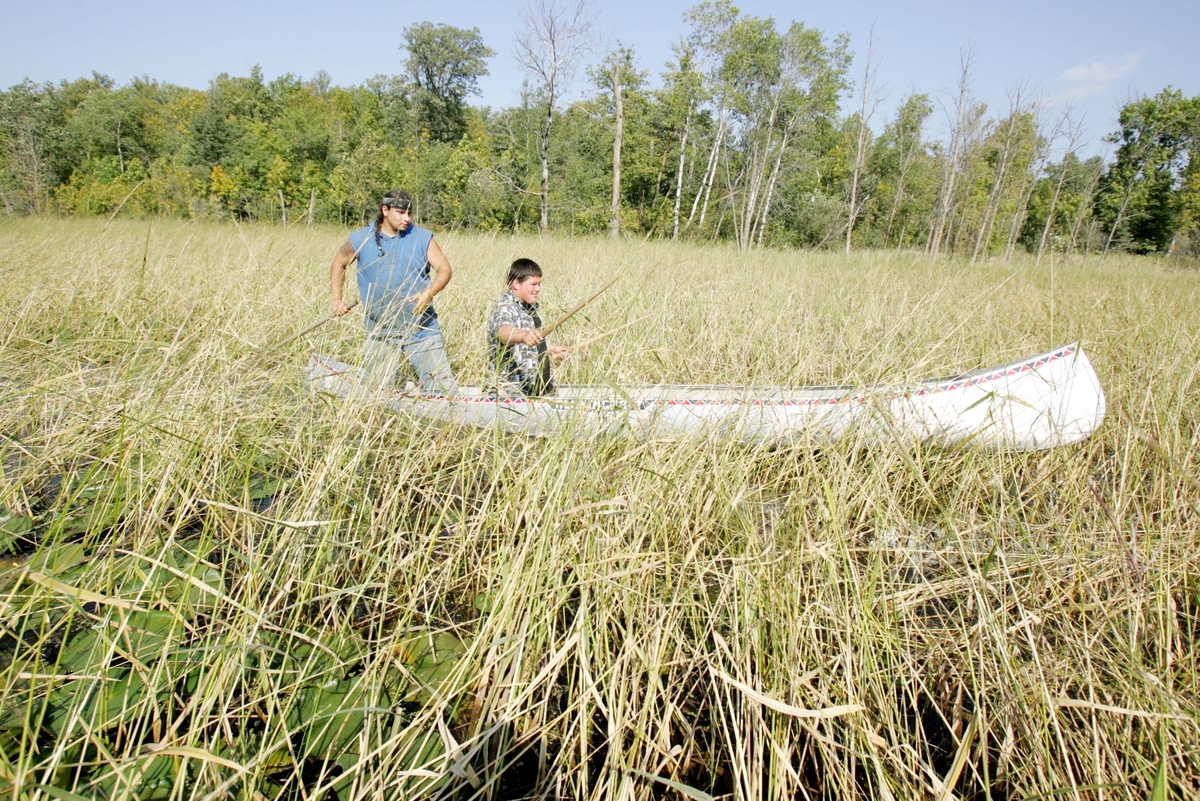 Joe Hoagland, left, pushes a canoe through a wild rice bed as 14-year-old Chris Salazar learns how to harvest the rice.

Harvest season is upon us, but in the U.S.'s northern lakes, it's not just the last tomatoes and first pumpkins. Through the end of this month, canoes will glide into lakes and rivers for the annual gathering of wild rice, kick started with the popular Wild Rice Festival in Roseville, Minn., on Saturday.

Wild rice - an aquatic grass that bears a resemblance to the edible grain - has been the center of the Ojibway Indian diet and culture for centuries. It's considered a gift from the Creator, according to Thomas Vennum, who wrote the book on it. According to legend, the Ojibway followed a prophecy to find the place where the food grows on the water, which was around Lake Superior, particularly in Minnesota.

The Ojibway gather wild rice by hand. Ricers went out two to a canoe, one with a forked push pole, and the other with a pair of wooden flails used to knock the rice into the boat. To protect the fields, Minnesota restricts the harvesting season and regulates boats and tools. Tribal harvesters manage themselves, and reservation waters are off limits to other ricers.

I grew up in 1950s Minnesota eating this nutty, earthy grain, and I didn't realize that in other places, it was a rare treat. But in the 1960s, scientists and businessmen tamed the wild rice, grew it in paddies and harvested by machine. Thirty years later, less than 10 percent of the world's wild rice was gathered by hand. Unlike the irregular, light brown lake rice, cultivated rice is almost black and uniform in size and shape.

But "cultivated" is a swear word on the reservation. Wild rice is a source of income for the Ojibway, and the cheaper paddy rice dropped the price. There are also other concerns like mining, dams, and inclement weather. This year, severe flooding drowned much of the crop.

Processing — or finishing — lake rice is hugely labor intensive. First, it's parched, or roasted, over a fire. Then it's hulled and winnowed. This can involve dancing the rice in a pit. But there have been a few mechanical advancements.

Bruce Savage has been finishing rice since he was 16. He's now 50 and is called "the young guy" because rice finishing is a dying art. He finished 15,000 pounds last year at his home on the edge of the reservation. Rule of thumb? 100 pounds per person.

His friend Rick Smith, who works with American Indian youth at the University of Minnesota, explains, "Rice is very spiritual for us. That's why we came here."

Bonny Wolf is the contributing editor of NPR's Kitchen Window. You can follow her on Twitter at @bonnywolf.

This recipe is from Rick Smith, director of the American Indian Learning Resource Center at the University of Minnesota's Duluth campus. He says only hand-parched wild lake rice works. Cultivated wild rice doesn't pop. Don't expect fluffy kernels like popcorn. Wild lake rice pops into tiny, squiggly forms. It has a rich, nutty taste and wonderful crunch. The cooking medium is vegetable oil or, if you're really feeling decadent, lard. Wild rice pops very quickly – in under 5 seconds – so be careful. Serve it plain with salt as an hors d'ouevres, sprinkle in salads or make into, yes, wild rice krispy treats.

To pop the rice, fill an 8-inch skillet 2/3 full with shortening. Heat until almost boiling, but not smoking. It's ready when you drop a kernel of rice into the hot oil and it pops.

Put ¼ cup or less wild rice into the bottom of a 6-inch wire mesh strainer and immerse into hot oil for 2 to 5 seconds, or until all rice is popped. (There is also an instructional rice-popping YouTube video.) Drain in paper towel-lined container. Continue until you have desired amount of rice.

Butter a 12-by-16-by-1-inch pan. Using a buttered spatula or waxed paper, press mixture evenly into the pan. Cut into squares when cool.