Accessibility links
Nordic Cuisine: Moving Beyond The Meatballs And Pickled Fish : The Salt New Nordic cuisine is not just a tweak on old Scandinavian food, it's a whole new method, fans say. Two restaurants and a nonprofit experimental lab are on the forefront of this trend that brings locally grown, seasonal food and high-tech food science together. 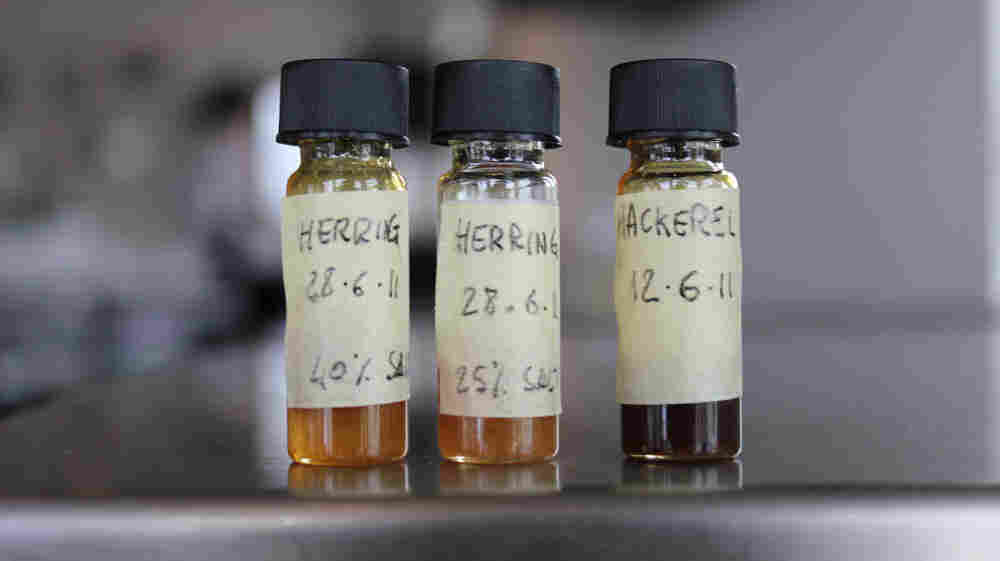 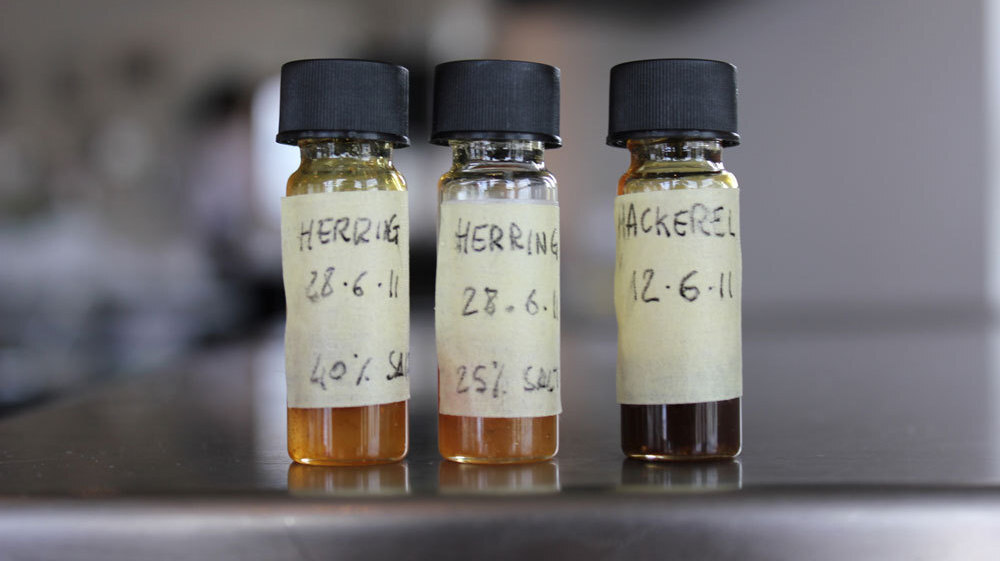 The Nordic Food Lab experiments with garum, a form of fish sauce familiar to the ancient Romans.

For many people, the phrase "Scandinavian food" probably doesn't bring much to mind beyond the Ikea food court. For those who do have a connection with these Northern European countries, the mental image is probably smothered in gravy with a side of potatoes. But if you're coming to Copenhagen's noma restaurant expecting the same old meatballs and pickled fish, think again.

New Nordic cuisine has been catching the attention of foodies around the globe for a couple of years now, thanks in no small part to noma and other pioneering Scandinavian restaurants that are making over an old-fashioned and, some would say, outdated cuisine.

This is not "new" as in "revisited." This is "new" as in "new." Sure, there's still room for traditional whole grain rye bread, roast pork with crackling skin and strawberry porridge — if it's organic. But New Nordic cuisine is so much more.

On a houseboat parked right outside of noma (though independent), a handful of young, energetic cooks and academics spend their days experimenting with things like seaweed, pine needles, lichens and insects. Their only directive? To share their findings with anyone who's interested.

As his colleagues taste-test mealworms and make vinegar from rosehips, anthropologist Mark Emil Hermanson gets to think about how food contributes to a region's identity and what delineates the edible from the inedible.

"We've decided that the line is deliciousness itself," he says, sucking down a dropper of fermented grasshopper garum. (It is, truly, delicious. Like soy sauce with oomph.)

All this experimentation stems from the fact that New Nordic is a movement driven by a manifesto — literally — of local and healthy. And local is tricky when the growing season might last only from June to August. Under these parameters, the ocean takes on added importance, as do wild game, root vegetables and cold-climate berries.

The result is light, salty, sour, and full of fish. It's also quite playful. At the summer Olympics, noma's chef Rene Redzepi caused a stir by serving live, lemongrass-flavored ants at his London pop-up. When asked about what's notable in his kitchen these days, Redzepi mentions a "yeast fudge."

"It looks totally weird. It actually looks like a slice of bread," he explains. "It's a new thing that incorporates not only lots of good flavors, but also humor and surprise."

Redzepi says 10 years ago, his greatest challenge was in sourcing. Back then, humble Scandinavians weren't used to looking out the window for high-quality ingredients. For example, he says, not so long ago sea urchins were imported from France ... until Danes discovered they were plentiful in their own waters.

It's an indicator of just how things stood 15 years ago when fine dining in Copenhagen meant going out for French or Italian. Now, says David Johansen, head chef at Copenhagen's Kokkeriet, also on the vanguard of the new Nordic movement, "it's total opposite. It's almost impossible to get a French meal in Copenhagen. We have maybe four or five places. Whereas all the kitchens are based on the Nordic."

But you don't have to live in Copenhagen or Scandinavia to take part in the New Nordic craze. Redzepi says the lessons here are transferable.

"If there is a message that comes through this, it's that right now cooking is happening in a part of the world where the history of cooking is poor, the weather conditions are extreme...everything talks against it, so to speak," he says. "(But) it's happening. And that's the message: that good food can happen anywhere."