Accessibility links
McRib Fans May Have To Wait Till Christmas For Their Sandwich Fix : The Salt Fans complain as McDonald's delays this year's pork-a-licious McRib sandwich to boost an anticipated slump in winter sales. The sandwich is a food engineering marvel of pork trimmings pressed into a boneless rib shape, topped with pickles and barbecue sauce, sandwiched on a bun. 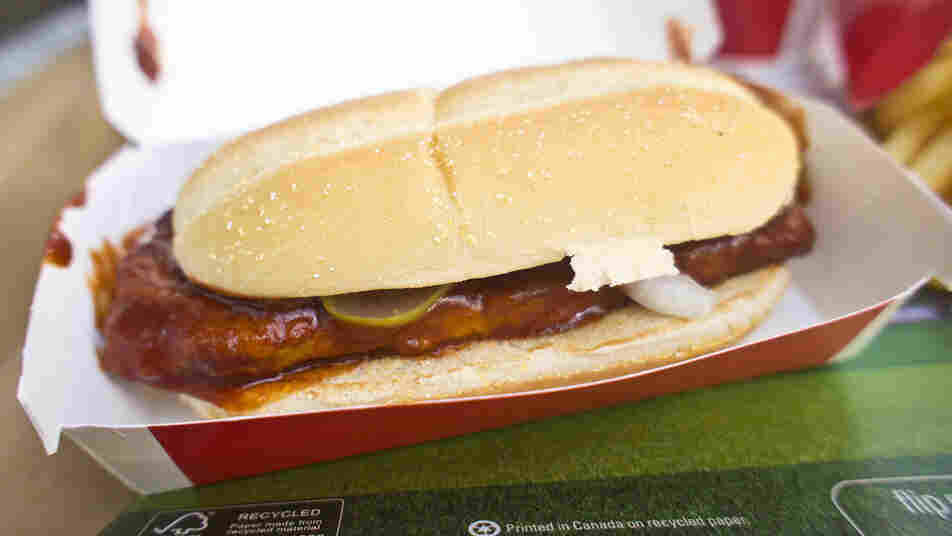 McDonald's plans to delay the return of the seasonal McRib sandwich in the hopes it can help boost late winter sales. Ruocaled/Flickr.com hide caption 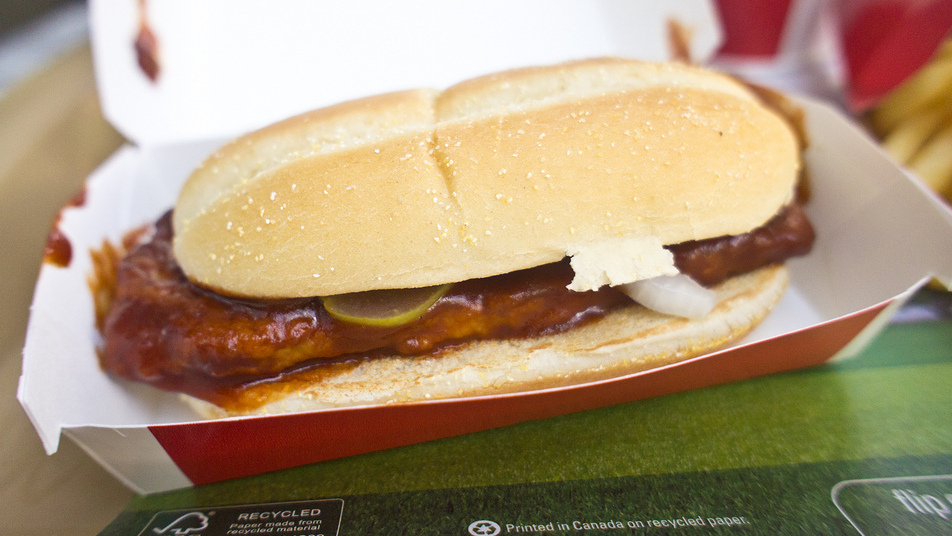 McDonald's plans to delay the return of the seasonal McRib sandwich in the hopes it can help boost late winter sales.

It's not quite as iconic as falling leaves, crisp air, and football, but the McDonald's McRib is usually something folks look forward to enjoying in the autumn months. Not happening this year, according to a company memo obtained by Advertising Age.

Rest assured, the McRib is still coming back from its warm weather hiatus, but fans will have to wait till late December to experience that signature mix of barbeque sauce, onions, pickles and pork trimmings, scientifically squeezed into a boneless rib shape. The reason? The company wants a proven winner to help boost anticipated late quarter sales.

According to the memo, the McRib was originally scheduled to show up between October 22 and November 11. But in an abrupt reversal, McDonald's pushed the McRib's annual launch all the way back to the end of the calendar year.

So what's a fan to do? "It feels a little displaced," said Alan Klein, creator of the McRib locator and official McRib Superfan. He's been following the McRib as it popped up around the country since 2008.

"In some ways it feels like such a long time to wait. But really, when it's a whole year, a couple more months, it makes it all the more worth it when you finally can have it," said Klein.

But some fans are plain turned off by this apparent attempt to delay the treat so far into the winter.

"I feel like the McRib has jumped the shark," said Ryan Dixon. He works for a consulting firm and blogs in Burbank, Calif.. He's a long time fan of the sandwich..

McDonalds stopped selling the sandwich nationally in 1994, causing folks like Dixon to admit to All Things Considered that he once drove 10 hours to get one. "It's a sort of culinary cousin of a Sasquatch, a Loch Ness monster, a chupacabra," he told host Guy Raz. You hear about a sighting, he says, but by the time you get there, the sandwich has disappeared.

(The McRib went national again in 2010 for limited fall engagements nationwide, which probably ended such drives, but not the passion.)

Now Dixon says the sandwich is positioned for the mainstream: "Them using the McRib to boost up their sales in the end of the winter months feels like they really don't appreciate what they have."

But if McDonald's worries about sales during the winter months, they're not alone. Each winter, restaurant sales drop across the country, analysts say. The colder it is, the less we go out, leaving drive-thrus empty wherever there's snow. But last year we experienced what meteorologists called a "snow drought." That was music to McDonald's ears, and it allowed the company to bump sales up a huge 9.8 percent last December, according to Ad Age.

"This winter's going to be completely different from last winter," says Jack Boston, senior meteorologist with Accuweather. Weak El Nino weather patterns in the Pacific will likely result in "much above normal snowfall amounts in the I-95 corridor where a large portion of the population of the United States lives."

Bad weather is bad news for the restaurant industry. To beat or even come close to last year's sales when the weather was warm, McDonald's needs a big push — and that could be the McRib, they suggest in the memo. The company did not return a call for comment.