Accessibility links
As Scientists Question New Rat Study, GMO Debate Rages On : The Salt Scientists question the methods and results of a new study showing harm to rats fed a diet of GMO corn and herbicide. But the debate is far from settled as interest groups call for a ban and governments ask for further studies. 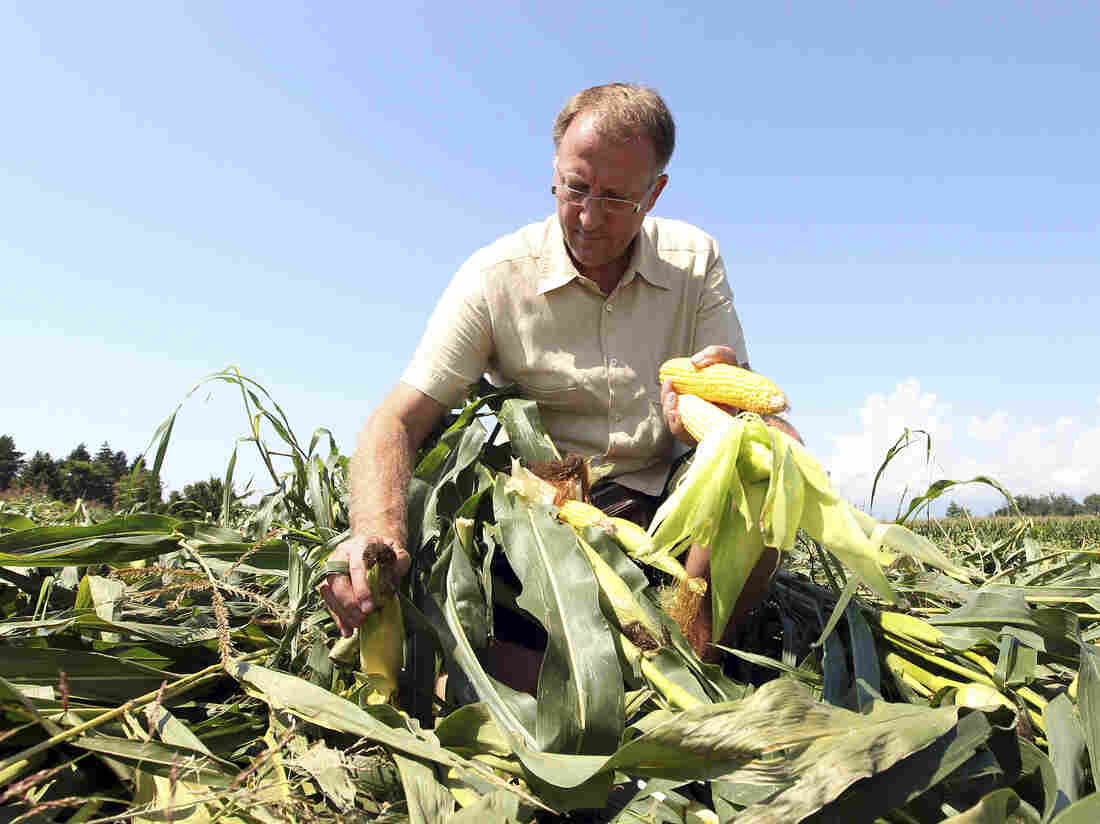 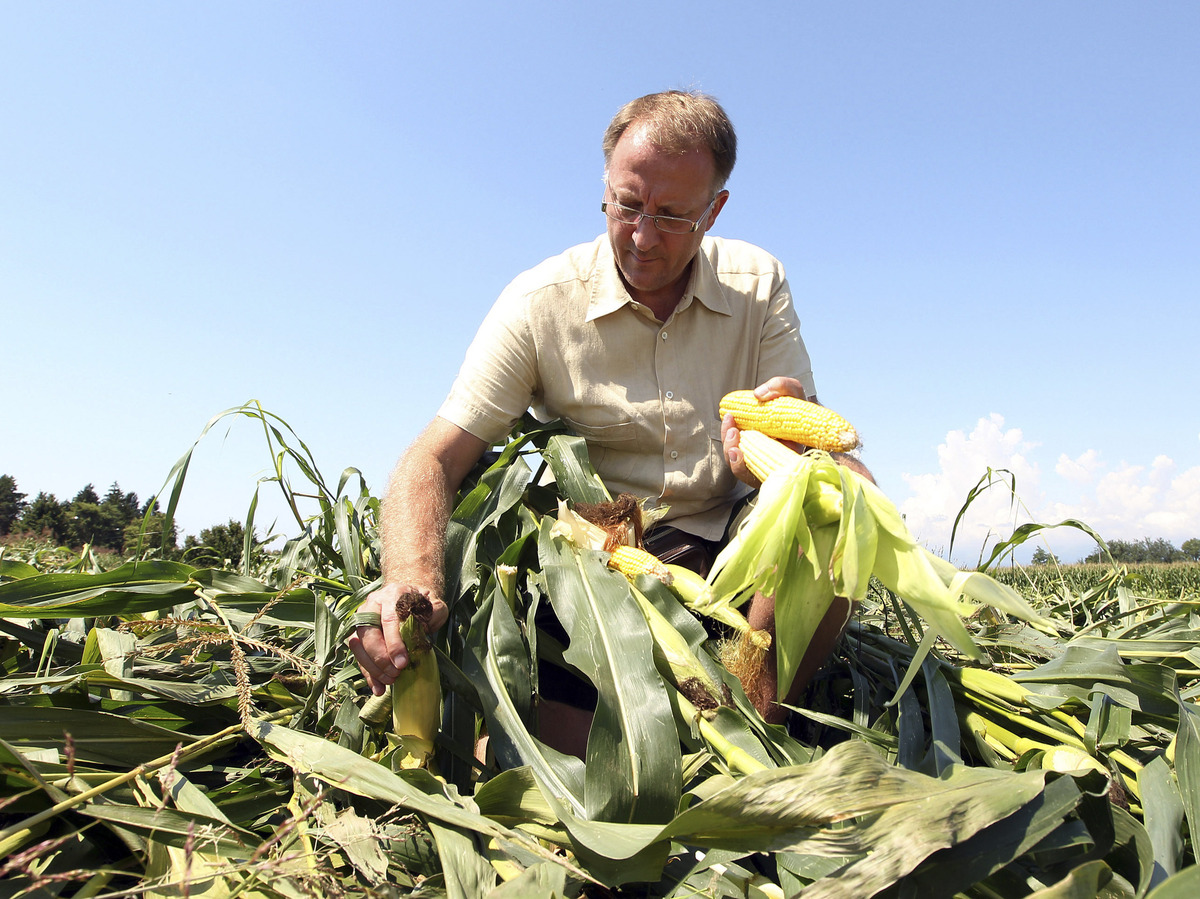 Italian farmer Giorgio Fidenato picks up what's left of his genetically altered corn after anti-GMO activists trampled it, back in 2010.

The headlines on the press releases that started showing up yesterday, here at The Salt certainly got our attention. Just one sample: "BREAKING NEWS: New Study Links Genetically Engineered Food to Tumors."

The reason for all the excitement was a study published this week in the well-respected journal Food and Chemical Toxicology. The French scientists who conducted the study basically concluded that rats fed a diet of genetically modified corn and small amounts of herbicides got sicker faster than their counterparts eating regular corn and no herbicides.

Based on the study, several anti-GMO groups are calling for a ban and the French government is calling for more investigation, but many scientists met the research with a heavy dose of skepticism.

The study describes an experiment in which scientists fed 18 different groups of rats (ten rats in each group) various concentrations of a genetically engineered kind of corn and/or small amounts of the herbicide Roundup. (Roundup is widely used in combination with genetically engineered "Roundup Ready" crops.)

Two control groups got a diet of non-modified corn and no Roundup. The experiment went on for two years, an unusually long time. Most experiments with rats that attempt to measure the toxic effects of chemicals last only 90 days.

On average, the rats that ate GM corn or drank water laced with Roundup did worse than the control group. Tumors showed up earlier (at least in some of the groups) and more rats died than in the control groups. The contrast was most stark among female rats.

So is this solid evidence that GM corn (or other crops) are bad for you? The author of the paper, Gilles-Eric Seralini, who has been campaigning against GM crops since 1997, says yes. Definitely yes.

Other scientists say, absolutely not.

Some of their complaints about the study are aimed at the study's methods. Critics point out that the type of experimental rats used in this study are particularly prone to tumors. So if you divide up 200 of them into twenty groups, as this study did, you are likely to get very high tumor rates in some of the groups. And the fact that such clusters of tumors didn't show up in the two small control groups could easily be due to random chance.

One particularly irreverent critic, Michael Grayer, a medical statistician, pointed out that the study included 18 groups of rats that were exposed to GMOs or Roundup (nine each for male and female rats), compared to only two control groups. "The potential for cherry-picking the nice positive results here from a sea of boring null ones is immense," he wrote on his blog. "Not saying they did it, of course, but it's certainly a concern."

Also, if this experiment truly showed a link between genetically engineered food and tumors, one might expect the rats that ate more of the GM corn to develop more tumors. In fact, the opposite happened. The rats eating a diet of 33 percent GMO corn stayed healthier than animals eating food with a GMO concentration of just 11 percent.

Seralini, for his part, says that this simply shows that GMOs are toxic in a different way. They merely need to rise above a certain threshold level to have harmful effects; increasing the concentration doesn't increase the harm.

Some scientists were inclined to dismiss the study simply based on Seralini's history of anti-GMO claims. "I know this guy. He has published a lot of rubbish," says Harry Kuiper, a Dutch scientist who used to be in charge of the European Commission's research program on the safety of genetically modified foods. That program sponsored many previous studies, including animal feeding studies, which came to less alarming conclusions and got much less attention than Seralini's.

In fact, Kuiper and many of his colleagues don't even think that animal feeding studies are a very good tool for studying the safety of GM foods. If there was a harmful chemical hidden in GM corn, they say, such studies wouldn't be likely to catch it, because rats can't eat enough corn for them to get a harmful dose of the toxic or cancer-causing substance.

But apart from methodological concerns and personal animosity, there's a deeper reason why scientists like Kuiper give little credence to Seralini's studies. There's a saying in science: Extraordinary claims require extraordinary evidence. For most of the scientists who have been studying the safety of GMOs, it's an extraordinary claim, at this point, to assert that the current generation of genetically modified crops are harmful to human health.

There's no apparent reason why that should be true; No one has found new toxic substances in these crops. And the giant feeding experiment that's been going on for the past fifteen years — hundreds of millions of Americans consuming GMO ingredients — hasn't produced evidence of harm, either.

It would take a lot more evidence that the results of this study to change their minds.