Accessibility links
Here's The Scoop On Cat Poop Coffee : The Salt Would you pay $25 for one ounce of coffee from beans that traveled an animal's intestinal system? Many people do, and like it, although I'm not so sure. In fact, a whole industry has cropped up around cat poop coffee, which experts say has degraded the taste of the real thing.

I can't remember when I first heard about what I affectionately refer to as "cat poop coffee." But I do remember not believing it was real. I'm still having a hard time, to be honest.

But cat poop coffee — that is, civet coffee (or "kopi luwak," as pronounced in Indonesian) — is real, and really expensive. Like $60 for 4 ounces of beans — or in some boutique cafes, at least $10 a cup. That's a bargain compared to what it costs for elephant poop coffee; but I digress.

The beans are literally gathered from animal feces. And for the purposes of empirical research, I got my hands on some for a taste test. I bought two little samples (costing more than $100) from two companies. Not wanting to screw up this pricey cup of joe, I brought the beans to a nearby cafe, Chinatown Coffee, to have the baristas do their magic.

At first sip, I wasn't wild about it — though maybe I would have thought differently if I hadn't known its provenance. Tim Carman, food writer at The Washington Post, did his own taste test earlier this year: "Petrified dinosaur droppings steeped in bathtub water" is how he put it.

Andrew Shields, the Chinatown Coffee barista, on the other hand, seems pleasantly surprised. "I've never had anything like it," he says, using words like "vegetabley, tea-like and earthy" to describe the taste. "Is it worth it?" he pondered the price out loud, "for me, not regularly."

So why are people willing to pay so much for this stuff? Let's start with coffee production 101:

Coffee beans are actually seeds found in the pit of cherry-sized fruits on the coffee plant. To arrive into our cups at Starbucks, the seeds are separated from the fruit's flesh, fermented, roasted and ground in various and increasingly complex incarnations. We crafty humans have devised several ways to synthesize that process of fermentation. 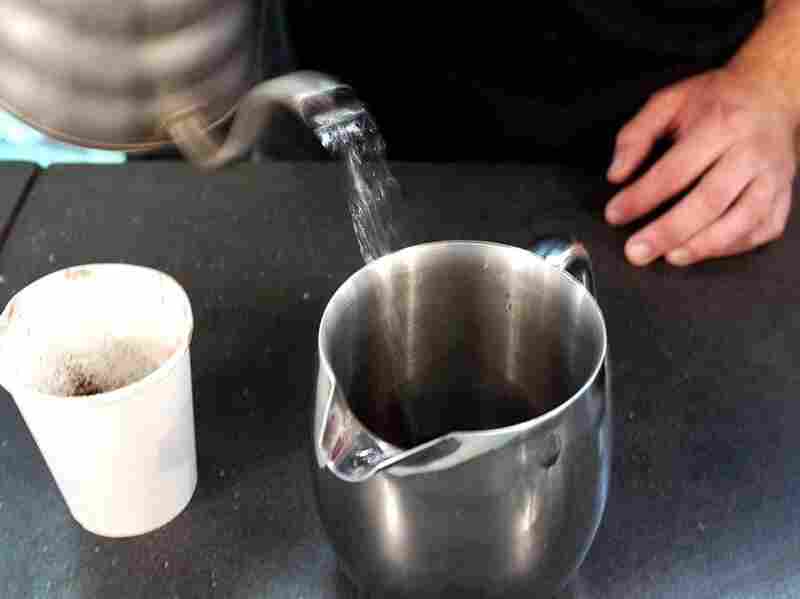 Andrew Shields, a barista at Chinatown Coffee, makes a custom cup of civet coffee, following the instructions to use a French press. Claire O'Neill/NPR hide caption 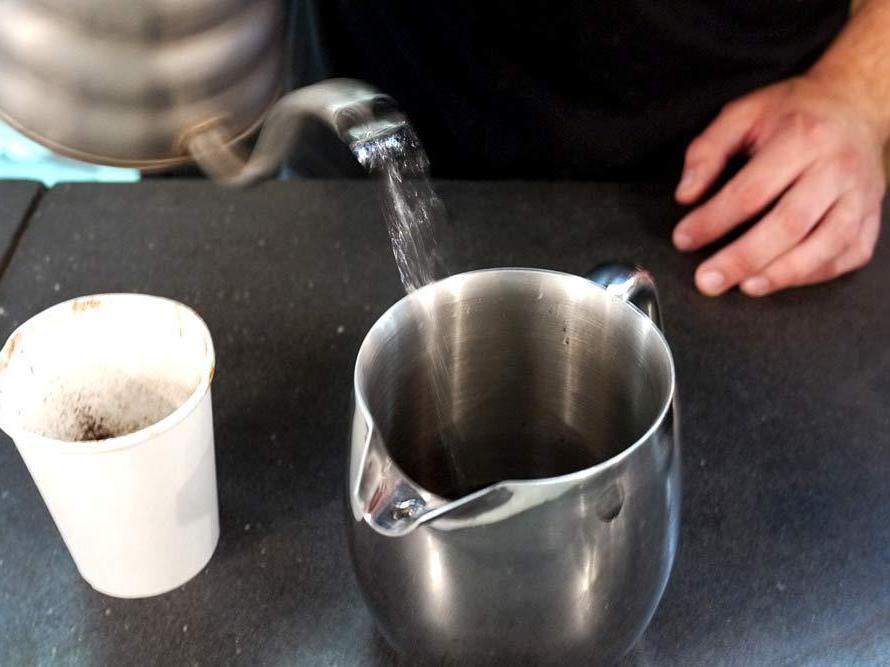 Andrew Shields, a barista at Chinatown Coffee, makes a custom cup of civet coffee, following the instructions to use a French press.

But fermentation also happens naturally in the wild — in an animal's digestive tract, for example. And the Asian palm civet, a native mammal (not really a cat) to Southeast Asia, eats the ripest berries of a coffee plant; through the process of digestion, the seed is separated from the fruit and is fermented. Traditionally, wild civets would go about their business and humans would collect the fermented droppings.

"When you see it in the wild, it looks kind of like an Oh Henry! bar," says coffee historian Mark Pendergrast, author of Uncommon Grounds.

Some coffee connoisseurs say that the natural process of fermentation leaves the final cup of coffee tasting much smoother and less acidic than any other coffee. That doesn't necessarily explain the price tag, though.

And it's not even as rare as it used to be.

"The problem," says Oliver Strand, another coffee connoisseur, "is that it became so desired as a luxury good that they started caging the animals and feeding them coffee that isn't ripe."

Strand, who often writes about coffee for The New York Times and is working on a book, says that not only is the fruit unripe, but also that some civet farmers are feeding the animals varieties like Robusta, decried by many coffee lovers as an inferior bean — the one often used in instant coffee.

The baristas at Chinatown Coffee in Washington, D.C., were suspicious of the dark color of the beans, but pleased with the taste. Claire O'Neill/NPR hide caption

"There's a fetishized market for the coffee," says Strand, "which has incentivized less-than-ethical practices."

To that end, Pendergrast actually argues that we should be paying more for coffee in general. One of the main reasons he wrote a book about the coffee market, he explains, is that "it's a very good way of looking at the relationship between the developed and underdeveloped world," he says. "The people making our coffee are sometimes making less than $1 a day, and yet we pay $3 for a cup of coffee."

So that's the world we're living in — a world in which cat poop coffee has been fetishized. Then again, I've seen stranger things. Bottom line (pun intended): If you decide you want to try the coffee yourself, be careful where you get it.

And although few of the aforementioned tasters would pay for it — I know I won't buy it again — that doesn't make us any less insane: At the end of the day, we all readily drank coffee from an animal's feces. Did I mention bird poop coffee?

While writing about cat poop, Claire was neglecting her normal duties at The Picture Show, NPR's photo blog.