Accessibility links
Three Burning Questions Answered About Salt : The Salt In honor of our first birthday today here at The Salt, we delve into the mysteries of our namesake rock. Why do low-salt foods taste bad? Do you need hand-harvested red Hawaiian salt? Read on. 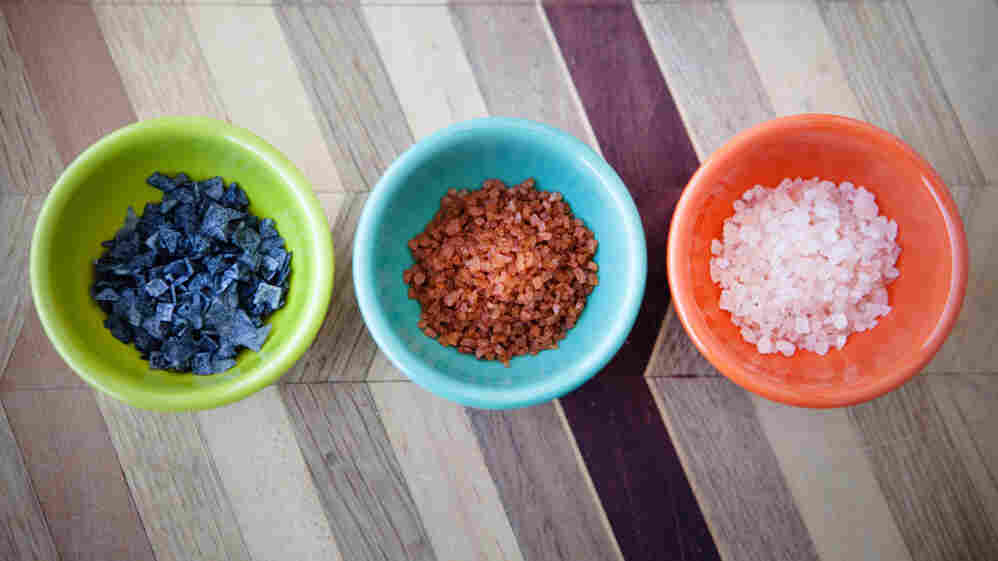 Salt — it's the ultimate condiment. It's the only rock we eat, and it makes our food taste better. There are dozens of varieties, from hand-harvested Himalayan pink to plain-old kosher, to various herb-infused blends. But, as we report a lot around here, when we eat too much, it can be bad for our health.

We named our food blog The Salt because of all these fascinating and contradictory elements embodied in one humble little crystal. So in honor of our first birthday today, we thought we'd help clear up some of our burning questions about this versatile rock.

No. But it may taste that way because the crystals in sea salt tend to be larger, and larger crystals diffuse more slowly on the taste bud, making the flavor last longer, says Michael Tordoff, who studies taste perception and the physiology of salt at the Monell Chemical Senses Center in Philadelphia. (See our related physics discussion in the post on extending candy flavor.)

There are additional elements in sea salt that are not found in regular table salt that could affect the flavor, like potassium, calcium and magnesium, Tordoff says, but "they may add some bitterness," not saltiness.

"Basically, this is all marketing," Mark Kurlansky, author of the book Salt: A World History, told NPR in 2010 when Wendy's made a big deal of adding sea salt to its fries. "Sea sounds a lot better than rock [salt]. But if the product is pure, it is the same," he says.

Barton Seaver, a National Geographic fellow and former chef-owner of the sustainable seafood restaurant Hook in Washington, D.C., says no.

Chefs "fall prey to what we call 'sexy salts,' such as the big, beautiful flakes of Maldon sea salt or the hyper-colored red Hawaiian sea salt or Himalayan pink rock salt," he writes in his book, For Cod and Country.

Home cooks do, too — even us. Those pretty premiums in the picture above came from our personal pantries. But the salt frenzy has gotten to the point that somebody started a fake Salt of The Month Club and you can buy salt made from human tears.

Premium salts do have a limited purpose: With their crunch, color and infused flavors, they're great for sprinkling on top of a finished food, like a caramel or a nice juicy steak, Seaver says. "In most cases, salt's role is to enhance the other flavors in the preparation," he says. But the fancy-schmancy stuff's charms will be lost in a vat of boiling pasta water.

Seaver swears that kosher salt is really all you need: It dissolves easily, and it is uniform enough in size that if you use your fingers, you can develop a feel for the right amount.

3. Why do low-salt foods taste so bad?

Ah, the age-old question. You're going to be hearing a lot more from us on this one soon, but the short answer is that humans have a very primitive mechanism for tasting sodium, and "nothing else fits through that channel," Tordoff says.

One technique shows promise for tempering our salty cravings: Salt just the top of baked goods like crackers. The tongue tastes salt first, fooling it into thinking it's savoring something salty, even if there's none in the product itself.

But that trick's effectiveness is limited. "It's not so easy to do in soup," Tordoff notes, as Campbell's now knows.The company announced last year it was adding back in some salt to its low-salt varieties.