Accessibility links
Getting A More Svelte Salmon To Your Dinner Plate : The Salt Muscular fish like salmon, tuna and eel can benefit from more exercise in a farmed fish environment. New research and a new book are aiming to convince fish farmers that getting fish to swim faster will mean healthier products, less waste, and more profit. 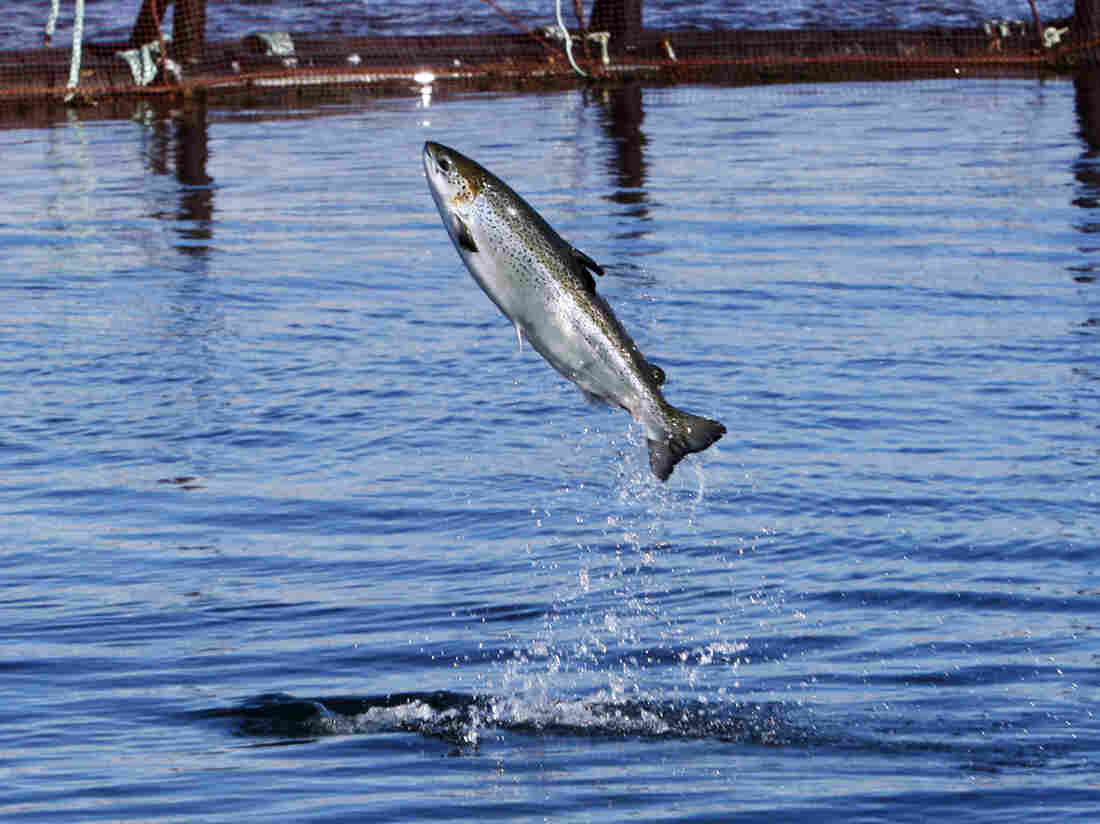 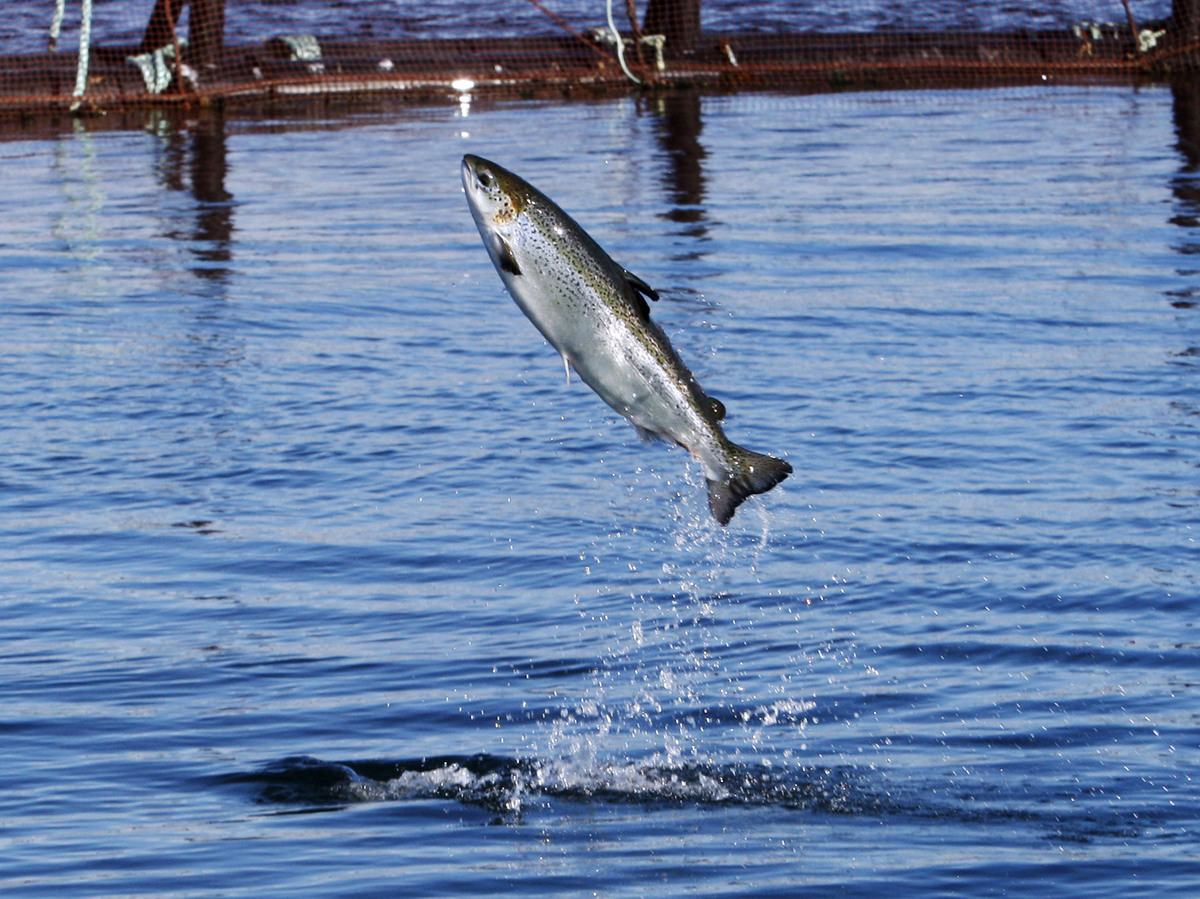 An Atlantic salmon leaps while swimming inside a farm pen near Eastport, Maine. Studies show farm-raised fish, like people, benefit from exercise.

When it comes to farm raised fish, it doesn't pay to let them be lazy. Fish like wild salmon, tuna and eel are built for the vigorous swimming required during migration.

These fish are "uniquely adapted to a physiology of high levels of exercise performance," says Tony Farrell, who studies fish physiology in the University of British Columbia Zoology department. "Therefore when we put them in constrained environments and remove predators, the consequences are they become a little more like couch potatoes."

When these fish are raised on farms in captivity, they are prone to a variety of health problems – everything from heart disease to viral infections — kind of like human couch potatoes. And, just like with humans, getting more active seems to make a big difference in their health.

There's at least 50 years of research on the physiological benefits of exercise to fish, demonstrating that when fish are good swimmers, they have better cardiovascular fitness, a stronger immune system and are less prone to disease and physical deformities than their sedentary brethren. Yet very few fish farms use exercise as a way to improve the quantity and quality of their product. New research and a new book, Swimming Physiology of Fish: Towards Using Exercise to Farm a Fit Fish in Sustainable Aquaculture, are trying to persuade the commercial fish farmer to give it a try.

Harald Takle, a senior research scientist at the Norwegian Institute of Food Research (NOFIMA) says fish farms often lose as much as twenty percent of their salmon when they are transferred from fresh-water holding tanks to ocean cages. Part of the reason, he thinks, is that they are simply out of shape. He has been conducting research on the ideal exercise regimen to equip young salmon (called smolts) with the stamina to withstand the rigors of the ocean environment.

In captivity, Takle says the smolts are kept in tanks that maintain a continuous flow of water designed to keep the tanks clean. The fish swim constantly against the artificial current, but little attention has been paid to optimizing the speed of the current to challenge the fish, and give them a good work out. "So the question was, 'What is the optimal speed they should be swimming at?'" says Takle.

In a study published last year, Takle and his colleagues reported that the optimal speed is 0.8 to 1.2 body lengths per second. Less than that, and the smolts are too sedentary, more than that, and they are over-stressed. The study was funded by The Research Council of Norway's HAVBRUK programme and the Norwegian Seafood Research Fund.

To test how this exercise routine improved overall fish health, the researchers exposed the fish to a common salmon virus and monitored their survival. The survival rates of the exercise-conditioned fish were 13 percent higher than the "couch potatoes" used as controls. What's more, the fish in the exercise group showed better growth, better swimming fitness, and genetic tests revealed the activation of genes known to be involved in the immune response and disease resistance.

Takle estimates that in many cases, farmed fish are swimming at only half the pace they should be. Research in other labs has looked at the effects of exercise on aggression, different types of training routines, turbulence, diet and the use of robotic fish as swim "trainers."

Farmed fish currently make up nearly half of all fish consumed, and the industry is growing rapidly. While it produces a fairly cheap source of protein, disease, waste and a decreasing supply of traditional fish feed remain problems yet to be fully solved.

Increasing survival rates even just a few percent by exercising fish not only creates a healthier environment for them, but it may translate into billions of dollars for fish farms.

Fish exercise may aid the fish farming industry financially, Farrell says, but there's another lesson as well. "Exercise, in a world that is sedentary, is beneficial—even in fish."

So what does that mean to what you get on your dinner plate? Some experts suggest that bigger, stronger, and healthier fish may also produce changes in color, texture or overall appearance that make a more attractive meal to the consumer. But there's no evidence yet that the nutritional content is affected.