Accessibility links
Some Grumble About Change As School Lunches Get Leaner And Greener : The Salt Federal guidelines introduced in The Healthy, Hunger-Free Kids Act of 2010 have started to go into effect this school year. That means lunches feature more fruits and vegetables, and fewer processed foods. It's a big change for students who are used to tater tots and pizza. 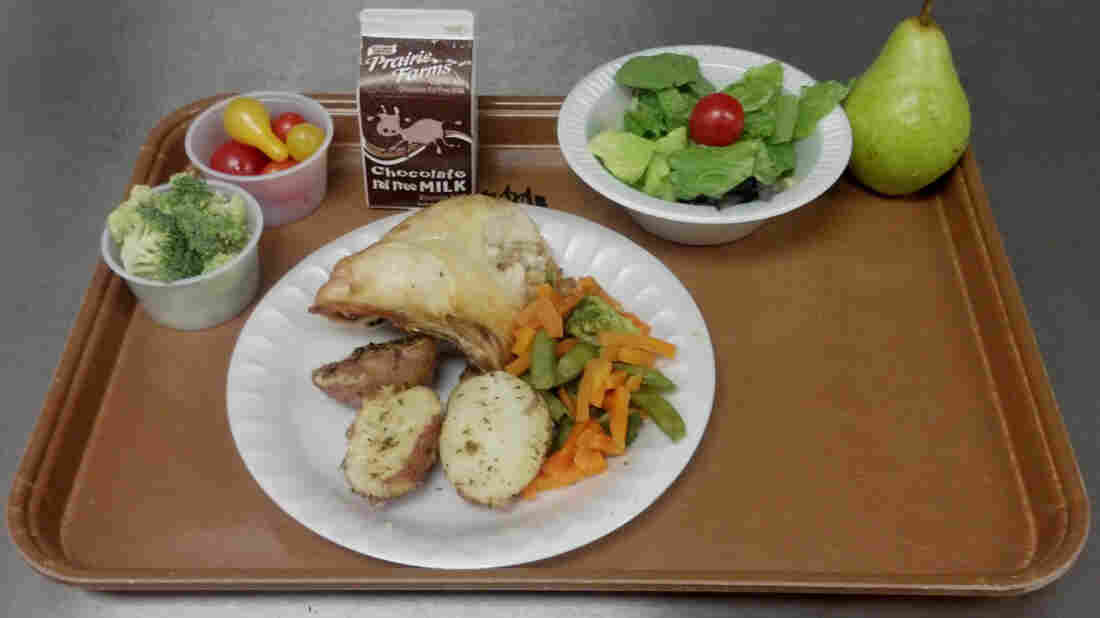 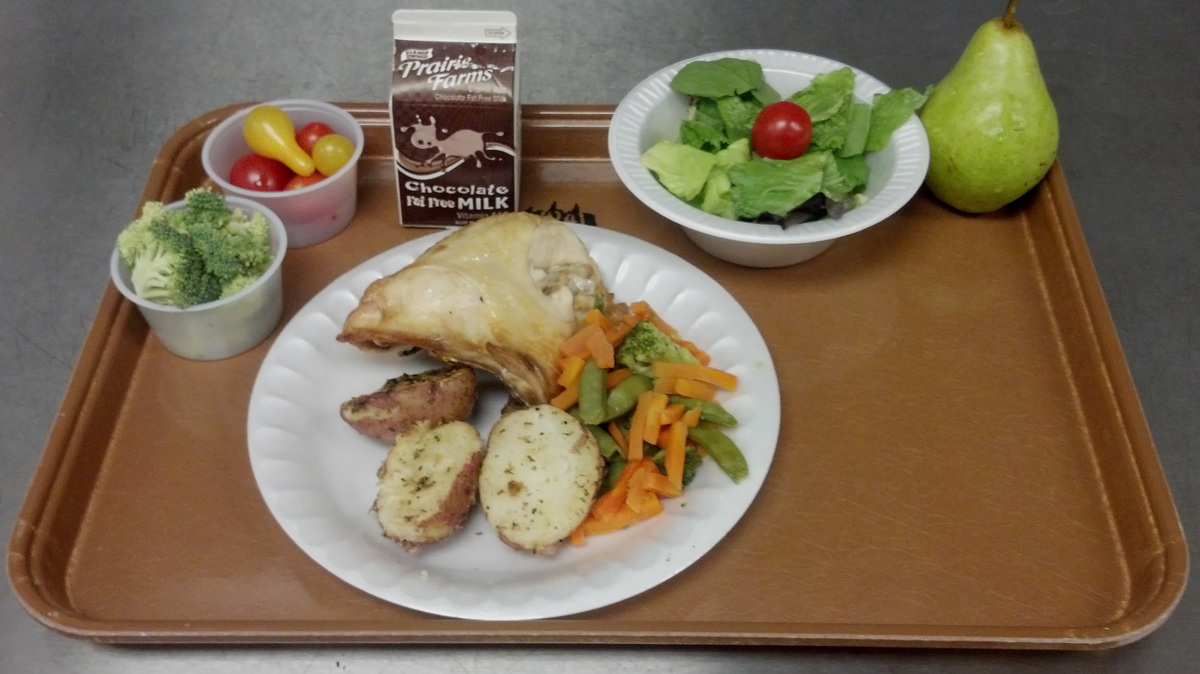 This fall, the more than 38 million kids who get their lunches through the National School Lunch Program are seeing big changes on their trays.

Federal guidelines governing what and how much kids are served are being phased in gradually over three years, starting this year. But the new kinds of food — more salad, less 26-ingredient mystery burgers and fried spuds — coupled with the perception that costs are up and calories are down, is making for a bit of a rocky transition. (To hear the full TOTN interview, click here.)

Chef Ann Cooper, also known as the Renegade Lunch Lady, is the food director for the Boulder Valley School District in Colorado. Cooper started out in food service as a "white-tablecloth sort of semi-celebrity chef," but now she celebrates her work as a lunch lady, she tells Conan.

She was changing up school menus before the law required healthier choices. Her menus are full of "all kinds of great things .... [such as] chicken pot pie ... ribs, and ... chicken quesadillas," and everything's made from scratch.

Cooper says it wasn't always easy to get kids excited about healthier foods. First, in Berkeley, California and then in Boulder, "I said, 'We're getting rid of all the trans-fats and high-fructose corn syrup and no more chocolate milk, no French fries, no tater tots, no chicken nuggets.'" There was pushback initially, she says, but eventually the kids came around.

But the unfamiliar foods aren't the only sticking point for some kids. Some complain that they're not getting enough to eat. In a parody of the popular song "We Are Young" by Fun., students in the "We Are Hungry" video sing, "My friends are at the corner store/ Getting junk so they don't waste away/ My lover ate her two grams of meat/ Just about to starve." You can watch the YouTube video below:

"We Are Hungry" a parody song about the inadequacy of school lunch.

Donze Black says the caloric guidelines, which cap meals at 850 calories, aren't the problem. "When we look at what students were actually eating on average a couple of years ago, it was around 790 calories in an average lunch," she tells Conan.

Chef Cooper agrees. "The problem is [before] there was never any maximum, so kids used to be able to have two or three pieces of pizza, chocolate milk and a cookie." Now, there's still pizza, but it's served with salad, fruit and low-fat milk. And if that's not enough? In her schools, "we have salad bars K-12 so all of our students can eat as much salad as they want," and the same goes for fruit and milk.

Another common argument against the guidelines is that it's too expensive for schools to offer fresher, less-processed meals.

Kirsten Saenz Tobey co-founded Revolution Foods, which contracts with schools across the country, delivering foods that meet the new guidelines. Lots of what they offer will actually look pretty familiar to students. "We do everything from chicken enchiladas on whole-grain tortillas to a great all-beef grass-fed hotdog on a whole-grain bun," she says, and they've been doing it for more than six years.

She agrees that higher-quality ingredients can be more expensive, but to control costs, her company makes much of the food from scratch, and partners with suppliers. For example, "we partner with a great rice producer here in California, who has planted an entire field of rice for the schools that we serve. And it's an organic brown rice," she says. "It's a wonderful product that we found at a farmer's market originally," she tells Conan.

All three women agree that in time, most kids will be on board with what's on their lunch trays. "Kids who are in kindergarten today are going to start out with school food that is high quality," says Saenz Tobey. "Those kids will grow up knowing that that's what school food is."