Accessibility links
Bouillabaisse: From Humble Beginnings To High-Class Tourist Meal : The Salt Once the sustenance of humble fishermen, the famous Marseille fish stew has become one pricey dish. It involves a two-part meal, starting with a basic broth made from shellfish and small fish, and incorporating four to six high-quality larger fish, plus exotic seasonings. 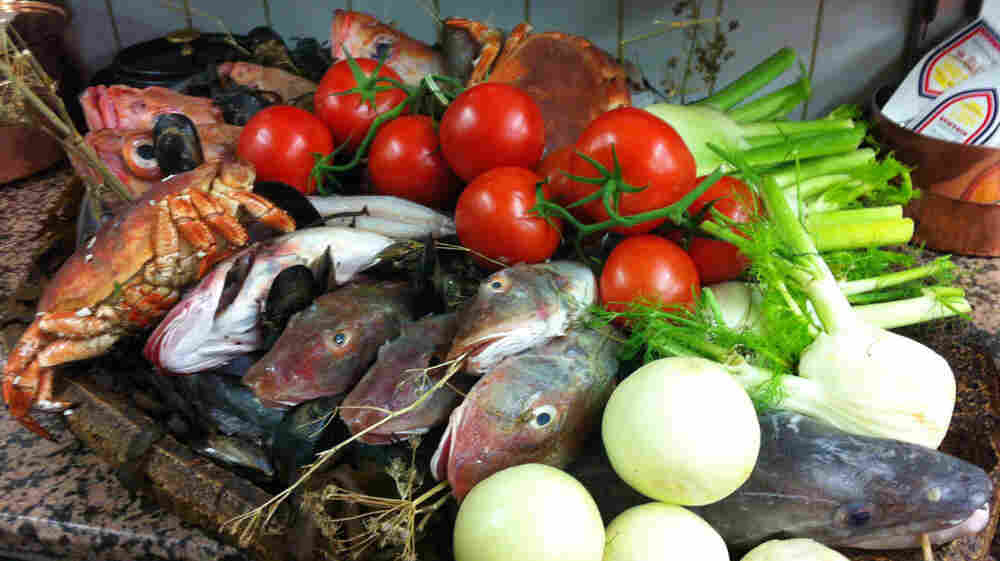 The ingredients for a vrai bouillaibaisse at Le Miramar in Marseille, France. Eleanor Beardsley/NPR hide caption 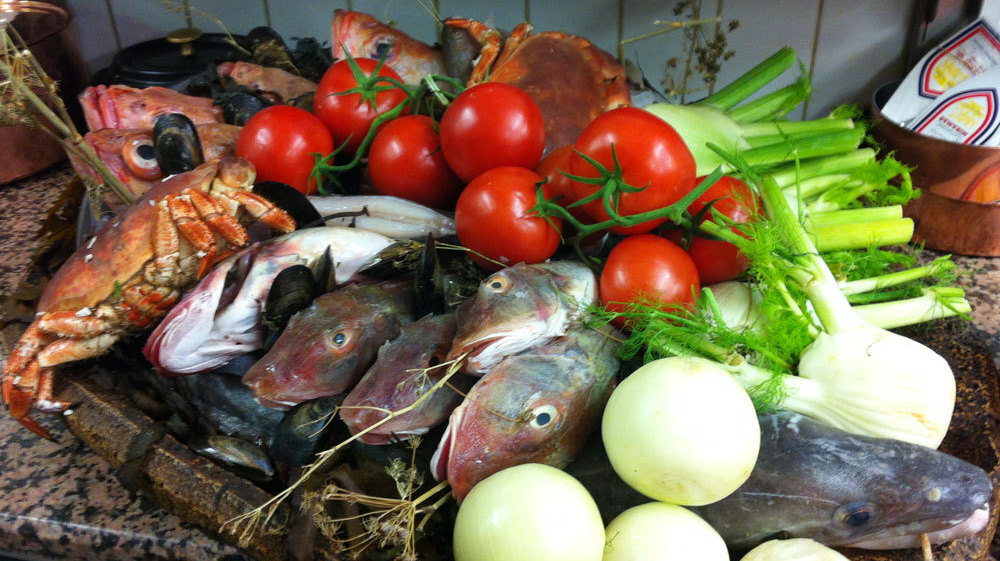 The ingredients for a vrai bouillaibaisse at Le Miramar in Marseille, France.

The southern French city of Marseille on the Mediterranean Sea has long been famous for its spicy fish soup, known as bouillabaisse. The soup started as a poor man's meal, made with leftover fish scraps, but these days, it's evolved to the point that it can run connoisseurs about $75 for a generously sized meal.

"In the first part, you make a soup with all these different little fish. With vegetables, tomatoes, onion, garlic, fennel, olive oil, saffron. And after, we cook the six different fish in the soup. It's very big. But this is a vrai bouillabaisse," says Christian Buffa, owner of Le Miramar, a popular destination restaurant on Marseille's old port for the region's famous soup.

The city is pretty serious about the vrai part. Back in 1980, according to the city's bouillabaisse information website (yes, they have one), local chefs drew up a charter describing the necessary ingredients in order to prevent the soup from being "debased by these tourist traps." And, possibly, to bring a little business their own way.

Buffa gets his fish fresh every day at Marseille's fish market near the docks. He says in the summertime, the restaurant needs some 2 tons of fish a week. He says a true bouillabaisse contains about 3 pounds of fish for one person, and these days, it includes high quality fish like John Dory, monkfish and red snapper. As he speaks to me, the restaurant's 15 chefs are bustling around, preparing for the Saturday lunch rush.

"Bouillabaisse was created by the sailors who worked on the fishing boats. All the best fish was sold, so they took what was left over and made a spicy stew of it," he says. It might have been made of shellfish and rockfish that was too bony to sell.

Some Marseillais like to say bouillabaisse was the soup the Roman goddess Venus sent to her husband, Vulcan, so he would sleep while she pursued her lover, Mars, according to the city's website.

Around noon, the Miramar begins to fill up with tourists from around the world, and from not so far away. Parisians Franc and Antoine DuBosc have brought their families down on the train. They came to Marseille for the sun, sea and bouillabaisse, they say.

Finally, my own Bouillabaisse arrives. Waiter Bluck serves up the first part, a thick fish soup, which is eaten with croutons dipped in rouille, a garlicky bread-based sauce that no self-respecting bouillabaisse would do without. Then he presents the six fish, which will be cut up and put in the soup as a sort of second course.

A crisp, dry white or rose is the perfect accompaniment to the spicy delicacy. Diner Elaine Cobbe, who hails from Ireland, is enchanted by the dish and the ritual around it.

"It's very good. I love the two-course idea of the meal. ... There's so much saffron in it. It's so yellow and orange. It's sort of like the sun down here in Marseille," Cobbe says.

I'd have to agree. The taste is spicy, warm and hearty, the soup's smoothness gradually revealing the complexity of the dish. The crunch of croutons and garlic, the joy of rubbing garlic on the croutons and slathering the rouille sauce on it, and finally, the chunky fish flesh. It's a full meal and a spicy appetizer, all combined.