Accessibility links
Freshwater Shrimp: Still Not A Midwestern Cash Crop : The Salt Some farmers growing shrimp in Midwestern ponds say they do it for love, not money. Despite recent advances in feed and efforts by several states to make shrimp-farming here a viable business, it's still fraught with too much economic risk to attract many growers. 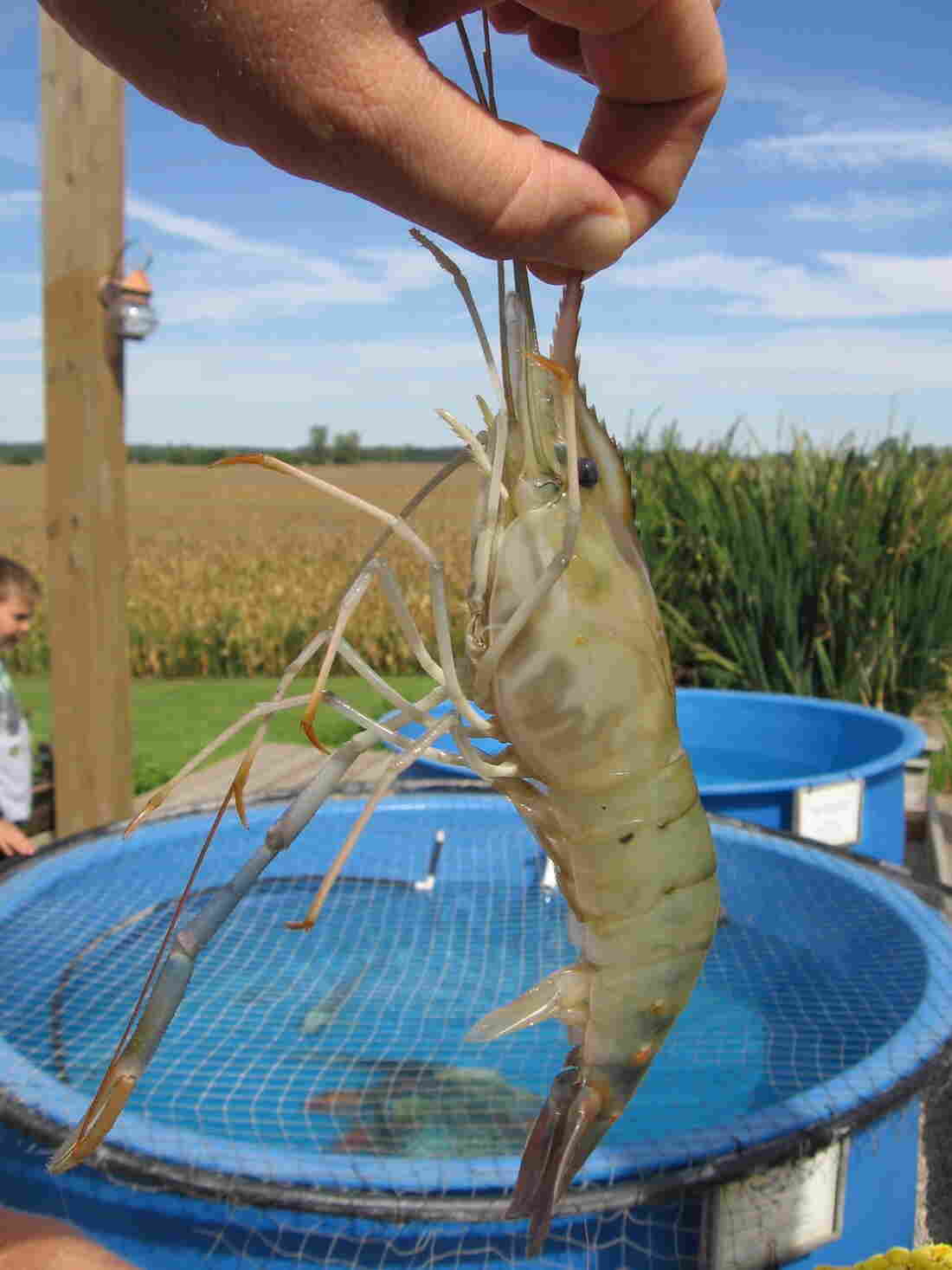 A plump specimen is plucked out of a bin holding this year's local harvest at the Ohio Shrimp and Fish Festival. Jeff Burghauser/Maureen Langlois hide caption 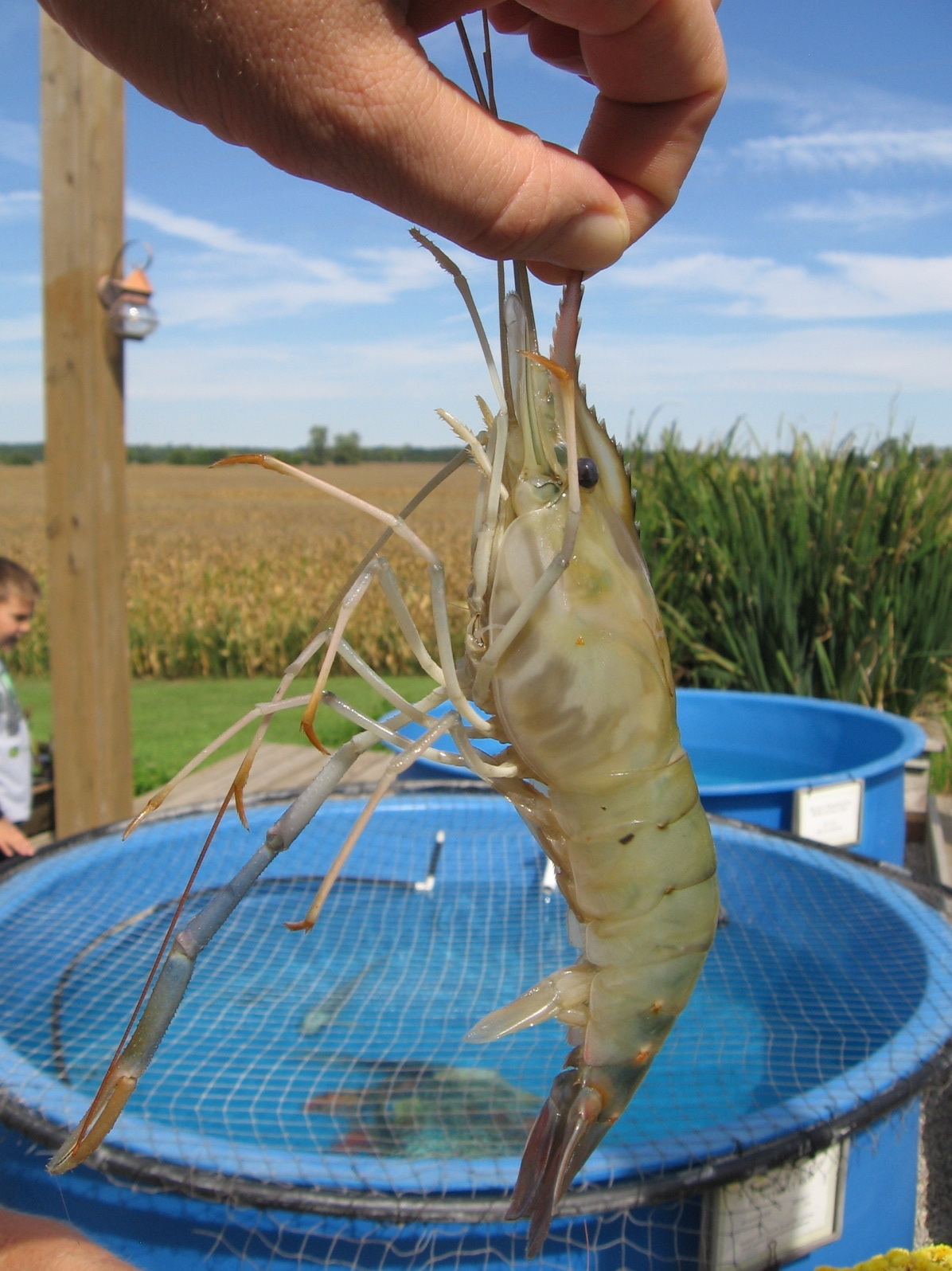 A plump specimen is plucked out of a bin holding this year's local harvest at the Ohio Shrimp and Fish Festival.

It's harvest time in the heartland, but not just for apples and squash. In small, back-lot ponds on farms across the Midwest, a different crop has been growing all summer. They're substantial, slightly sweet and a revelation to the land-locked palate, not to mention worth top dollar. Yep, it's shrimp season in Ohio.

But don't ask for any Midwestern shrimp at your local fishmonger. There aren't enough yet to make it to the store.

Despite recent advances in feed and concerted efforts by several Midwest states to make shrimp-farming in earthen or cement ponds a viable business in recent years, it's still fraught with too much economic risk to attract many growers. "I would not get into it if you're planning on making a lot of money," said Duke Wheeler, who owns a shrimp farm in Whitehouse, Ohio. "Economically, it's probably a break-even. On the stress level, it's a negative."

A big source of stress is making the shrimp's tropical biology work in a part of the world where growing seasons are four months or less. And between spring and fall, growers also have to worry about their teeming larvae being eaten by other pond-dwellers — and by each other.

It turns out that the species of freshwater shrimp most often grown in the U.S., a Malaysian specimen, Macrobrachium rosenbergii, are rapacious cannibals. They need to molt something like 11 times in the month when they're doing a lot of their growing, and every time one of them casts off its armor, its soft little body is eyed hungrily by its neighbors.

Between the weather, predation and cannibalism, 50 to 60 percent survival rate is pretty standard, and growers are overjoyed when they get 70 to 80 percent, according to William Wurts, an aquaculture specialist at Kentucky State University.

For Midwest shrimp farmers, one thing is certain: They can't compete with imports from the exploding Asian aquaculture industry on price. "The stuff that's importing from Malaysia and southeast Asia, frozen, that's $2 a pound — half the cost of production here," says Wurts.

As the biggest importer of shrimp (including the farmed freshwater variety), the U.S. has an interest in encouraging a domestic supply. Federal agencies like the National Oceanic and Atmospheric Administration are funding the development of new types of feed that alleviate the need for fish meal as a protein source. Some of these feeds depend on corn and soy, which this year may be an expensive addition to the supply chain.

Instead of competing on price, inland shrimpers are marketing freshness. Harvest festivals such as the Ohio Fish and Shrimp Festival in late September bring out the local community to taste the freshly caught shrimp. And while they're there, they can purchase some of the more economically favorable farm products like trout and perch.

There's certainly demand for shrimp. According to Dave Smith, who runs the festival, the shrimp sold out in two hours last year. This year, the festival pooled harvests from several producers, including grain farmers who have started growing shrimp on the side.

He's even thinking of ways to grow saltwater marine shrimp in his Urbana, Ohio-based aquaculture operation. "The marine shrimp are less cannibalistic, and if we can figure out the heating, we can do it year-round."

But for Duke Wheeler, in northern Ohio, the economics of raising shrimp just haven't worked out. After sinking $7,000 in a new pond to add shrimp-farming to his family's Christmas tree operation five years ago, he has warned his customers that he probably won't be continuing the shrimp operation in the future.

"I love shrimp, and my wife loves shrimp," said Duke Wheeler, "but this year we didn't get any, and there weren't enough for our volunteers.

"If we do it another year," he says, "it's strictly because of the joy that we bring to the families. That might be motivation enough."